Following on from the sights of Thailand we arrived at Perth Airport in August having been warned by friends that it would be cold and wet [with summer a month away] and to ‘make sure you bring some warm clothes’.
So we arrived with jeans, a couple of jumpers and sensible wet weather shoes (if there’s one thing us Brits can do, it’s be prepared for wet and cold weather) only to be greeted by a beautifully, sunny 25C day.
We very quickly changed into much more appropriate summer clothes and flip flops. This was clearly opposite to the thinking of Perthites who, in general, were hurrying around the city centre in hats, coats and winter boots, while we decided sun ourselves and have a picnic by the Swan River.
However, the weather wasn’t always on our side and we used the most of the ‘winter’ (not sure that it is technically right to suggest that 25C can be labelled as winter) days to peruse the city and its cultural sights. First stop Western Australian Museum in Perth.
The Museum has a great Discovery Centre with so many different animal species on display and really interesting and engaging interpretation, especially for children. They also have a great way of using their additional collections by having display drawers that you can open and explore at leisure – this was a great way to use collections that might otherwise be sat gathering dust in storage. I did however find the number of drawers dedicated to Australian spiders slightly unnerving. 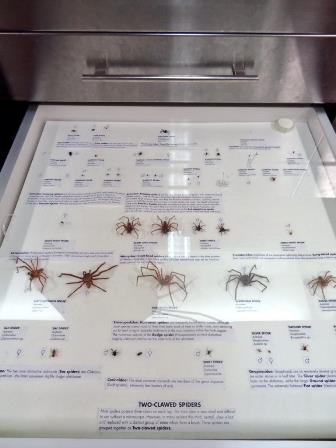 Upstairs was the Katta Djinoong: First Peoples of Western Australia – an exhibition which depicts the history and culture of the Aboriginal peoples of Western Australia from past to present. This was a very honest and thought-provoking exhibition which focuses on issues identified as important by Aboriginal people and the effects that European settlement has had on them, their culture, land and families over the years.
This is a sensitive subject and was handled incredibly well with the exhibition being created with input from Aboriginal individuals, communities and organisations all sharing their stories. In particular I was fascinated by the section on Stolen Generations, a government initiative from the 1900s to as late as the 1970s where aboriginal children, in particular light skinned children, were removed from their Aboriginal homes, families and communities and placed in institutions or in some cases of particularly light skinned children, with white families. It was considered a protective act and thousands of children would never get to see their parents again.
I, in my ignorance, had heard nothing about this until an unusually quiet night in Chiang Mai [Northern Thailand] earlier in the trip where we ended up staying in and watching a movie called The Sapphires, which is all about this.
So now, only a week later, I was in a great position to learn so much more about this incredibly interesting subject. Some of the first-hand accounts were heart breaking and this exhibition definitely reveals a raw nerve within the Australian history which is both brave and necessary.

We managed to lift the mood somewhat with our next visit to Caversham Wildlife Park where you get to hand feed Kangaroos and meet all sorts of native Australian animals which is a great day out for adults and kids alike! It even provides an opportunity for stroking a koala. How awesome!
From Perth we visited a few culturally relevant sites to WA and among the best were the Pinnacles desert one of the major tourist attractions of the region.
A huge expanse of limestone Pinnacles, some up to 5m high. A great Visitor Centre provides insight into why these pinnacles might have been formed, yes that’s right, ‘might’ … scientists aren’t exactly sure why they are there and have a few conflicting theories – you can make up your own mind. 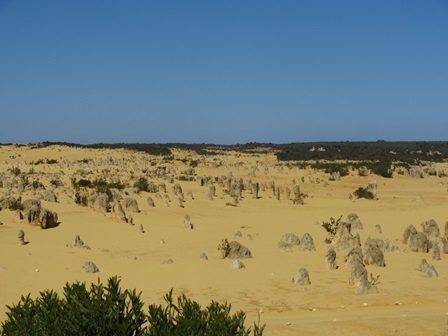 Following a month of travelling in and around Perth with some unbelievably long drives (who knew it was physically possible to spend seven hours driving solidly?) we were finally ready to move onto Queensland so off we flew and arrived into Queensland in September.
This was, unbeknown to us, incredible timing for the Cairns Festival with free outdoor cinema entertainment down on the Esplanade in the evening. The first film being the Australian classic – Strictly Ballroom, my joy was total.
First stop for us was to spend as many days as possible on a diving boat exploring the Great Barrier Reef which was, hands down, one of the coolest things I have ever done. Not much cultural about it, apart from learning about what the Australian Government are trying to do to preserve this Wonder of the World, it certainly needs some preserving, it is beautiful but, so am I told, not a patch on what it used to be years ago.
Once we had our fill of reefs, turtles, sharks and (my personal favourite) the bumphead parrotfish – which is not an easy thing to get bored of, we took a tour of Cairns’ Botanical Gardens which are beautiful and wonderfully maintained. They have an excellent exhibition space within the gardens which consists of three converted World War Two naval oil storage tanks set amidst a lush rainforest backdrop, unfortunately the Exhibitions were closed for installation while we were there but it looks like a fab setting for some really exciting exhibitions. 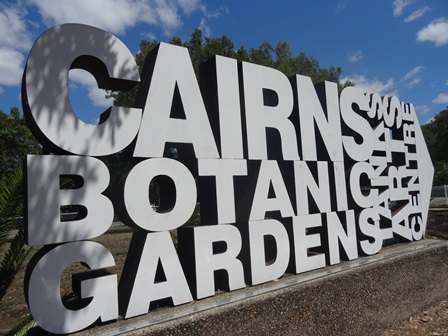 It was time to leave Cairns so we picked up our campervan and set off to see where it all started – Cooktown. With a population of just 2,000 Cooktown is a beautiful unspoilt coastline and the place (you might have guessed it from the name) where Captain Cook found safe haven for his damaged ship HMS Endeavour.
First stop, and the main reason for travelling this far north, was of course, the Captain Cook Museum. After an incredibly enthusiastic volunteer called Geoff announced that he could give us the condensed 5 minute or the full 15 minute history of Cooktown and Captain Cook himself I was hooked! A great little museum with a really interestingly curated exhibition about Captain Cook and the crew aboard the HMS Endeavour. 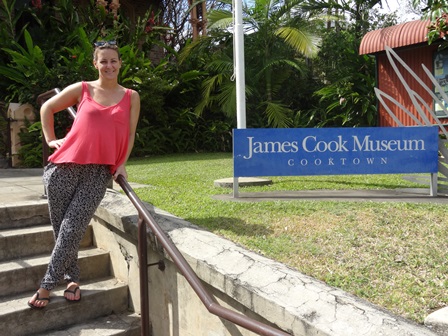 On our way to the next stop a sign attached to a tree caught our eye ‘Spy & Camera Museum, Herberton’ we had no idea where this Herberton place was but we were absolutely and positively going to find it! 178km later, several teeth rattling sections of unsealed road and a one hour diversion due to a road being ‘unsuitable for caravans’ and we found the place and it was absolutely worth it! Run by camera enthusiast Michael Peterson, the museum is one room with display cases, shelves and every available surface chock full of cameras through the ages. Dedicated in part to spy cameras of all different types, including the button cam which is very cool, the collection is mainly focused on photography through the ages. 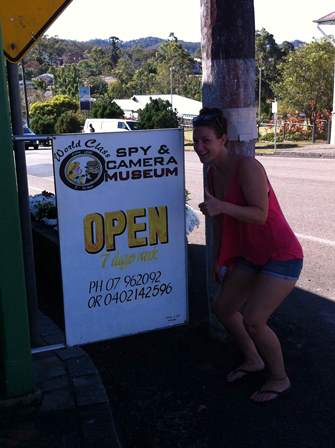 Michael’s passion, which was clearly on show during our personal guided tour of the museum and the quality of these cameras – most of which work and can produce great quality images – make this an excellent way to spend an afternoon.