Curator of natural history at Plymouth City Museum & Art Gallery, Jan Freedman talks about his love for Dippy and why it is the right decision to replace her with a blue whale

I remember when I first saw her. She took my breath away. That was 15 years ago, and she still leaves me speechless today. It was my first time in London and visiting the Natural History Museum was at the top of my list of things to do. That was when I fell in love. I was visiting with my girlfriend (and now wife) at the time, and she didn’t seem to mind too much. Walking up the well-worn, dark grey limestone steps towards the magnificent archway, you feel in awe: you know you are entering something grand, a special place. Hidden within the terracotta bricks, and dotted around the inside and outside of the building, are beautifully detailed statues of animals and plants. So perfect are these sculptures, it is as if the architects had visited the island of Cisthene itself, gathering petrified beasts from Medusa’s lair. Walk through the large old wooden doors, and that’s when you see her. And she is beautiful. A magnificent full skeleton of a Diplodocus. In a museum. In England!

This massive mounted skeleton is a cast of a type specimen of Diplodocus carnegii, an enormous sauropod dug from the rocks in Wyoming, USA. Whilst visiting the millionaire Andrew Carnegie, King Edward VII saw an illustration of the real Dipolodocus and wanted one for the British Museum. Of course Carnegie was amenable to the King’s wishes. He ordered, and paid for, a full cast to be produced from the original fossil remains. He had paid for the original fossils to be mounted at the Carnegie Museum in Pittsburgh. This huge beast, affectionately known as Dippy, has been at the Natural History Museum since 1905, where she was originally displayed in the Reptiles Gallery. She was moved to the main entrance hall (now called the Hintze Hall) fairly recently in 1976, greeting millions of visitors every day.

The Clash of the Titans

On Thursday, 29 January news was released about plans to replace Dippy in 2017. This iconic Titan is being moved aside for another Titan at the Natural History Museum; the impressive full skeleton of a Blue Whale. Social media went wild. It didn’t take long for two sides to quickly form on Twitter; those against the move (#SaveDippy) and those all for it (#TeamWhale). A parody Twitter account was quickly set up @SaveDippy) along with a petition attempting to stop the move which, apparently, has received over 20,000 signatures. Who should stand triumphant in this clash of Titans?

Of course there are many who adore Dippy, just as I do. And there are many reasons for her to stay. The most obvious being that she is a DINOSAUR! Dippy is also a rather modest film and television star. You may have seen her play the lead role in the classic film, described as a “funky fossil frolic” One of my Dinosaurs is Missing. She is a regular extra in several TV series, including the awesome spy drama Spooks and the wonderfully exciting Andy’s Dinosaur Adventures. Sir David Attenborough has even fed Dippy some ferns (albeit a CGI Dippy in Natural History Museum Alive). Quoted for the BBC, the NHM’s Director, Sir Michael Dixon has said that of course people love Dippy. But, he also says: “What makes the museum special is that we have real objects from the natural world – over 80 million of them – and they enable our scientists and thousands like them around the world to do real research.” 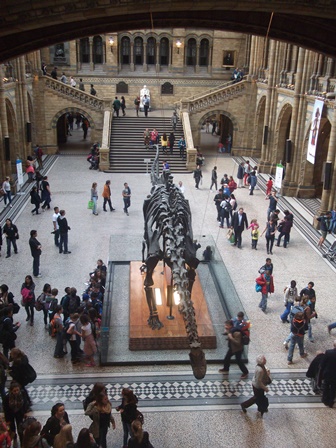 Dippy has been in Hintze Hall since 1976. Photograph by Jan Freedman

Indeed, real specimens are what makes all museums (large or small) so special and unique. Although Dippy is ‘just a cast’, she does have a story: why she was cast in the first place, why she ended up here in England, and her links to America. People like the stories of museum objects. Casts are not all bad. In fact the majority of dinosaurs we see on displays in museums are actual casts. Their massive size, and because fossils are fairly heavy minerals, makes mounting the originals tricky. This is what makes Sophie the Stegosaurus at the Natural History Museum, quite special as this dinosaur is around 80 per cent real fossil.

There are those who are very excited about the Blue Whale being moved to the Hintze Hall. The enormous suspended Titan (yet to be nicknamed) is currently on display in the wonderful Mammal Gallery. The Blue Whale, just like Dippy, is an icon in the Natural History Museum. And there are very good, and very relevant, reasons for moving her to the main Hintze Hall. Humans are making a massive impact on the planet. Never before has an animal had such control over the planet. Or the ability to destroy it. With seven billion of us (and rising) needing food and space to live, the wildlife and ecosystems around us are suffering. Numerous species have become extinct, lost from the world forever. The Blue Whale was almost one of these victims. Whale hunting by humans had left the Blue Whale extremely close to extinction until a ban was put in place in the 1960s. Suspended from the ceiling in the hall where almost all visitors will pass, this skeleton tells the story of animal conservation and what we are trying to do today to save the species.

These huge bones will give us even more. Before it is mounted, each individual bone will be scanned allowing researchers to print 3D copies to study the anatomy of whales in more detail. This will give insights into the way they move, their lifestyle and how such enormous beasts evolved. There is a more subtle message the Blue Whale will give to visitors. And a rather important one. Behind the scenes at the Natural History Museum, and museums around the country curators are carrying out research on the incredible collections. To stare into the depth of the Blue Whale skeleton, visitors will be peering into the hidden lives of museum curators. Lives which curators have been making more visible in recent years. This behemoth, one of the biggest animals ever to have lived on the planet, will be a statement for not only conservation but much, much more.

It is a very difficult decision, particularly as Dippy is such an icon. But it is the right decision. Dinosaurs can tell us a lot about conservation and extinction, yet I think they are so far removed from the real world their emotional connection is lost. The magnificent Blue Whale is an iconic animal which everyone can relate to today. For me, each time I visit the Natural History Museum I still look at this incredible skeleton with those same smitten eyes as I did when I was 18. There is something soft, welcoming and magical about the way the head is titled ever-so-slightly to the right, which gives a strange feeling this gentle giant is urging you to come in. I felt a fluttering in my stomach when I heard that after the Blue Whale is up, Dippy may well go on tour. The old fella is not out yet. I do not doubt that the incredible Blue Whale skeleton suspended from the ceiling will have just the same effect as Dippy has for over 30 years of visitors to the Natural History Museum. A new era will begin. An era where we all must take responsibility for the future of our planet.

Further info: There is an excellent account of the history of Dippy on the Natural History Museum’s website.