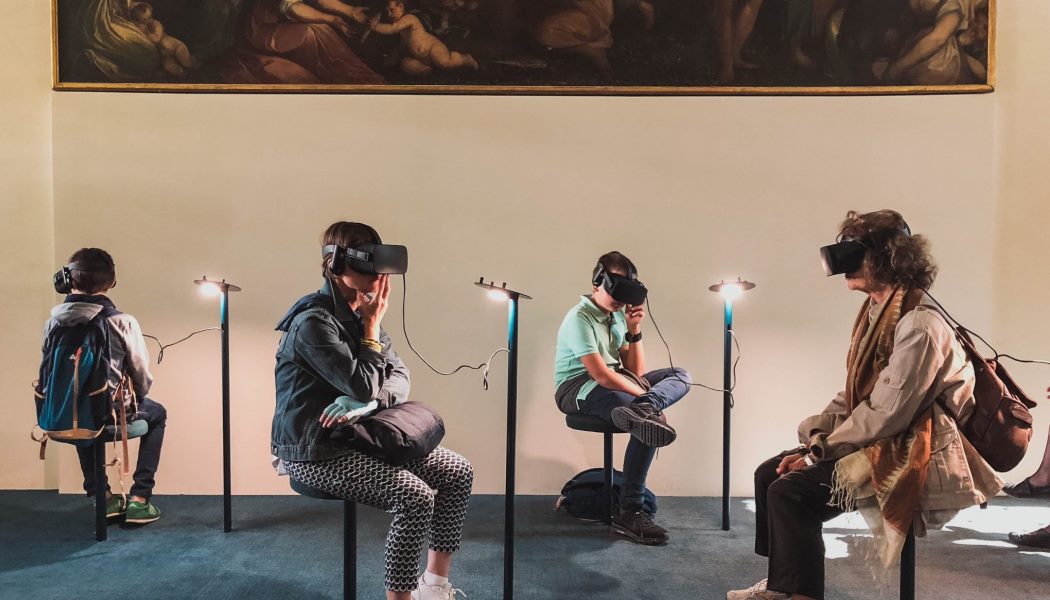 Immersive tech in the UK arts and culture sector

In the UK alone, virtual reality (VR) tech is predicted to reach £801 million by 2021. Worldwide, the entire immersive sector is expected to pull in $160 billion (£123 billion) by 2023, as more devices come online allowing more consumers than ever to easily access VR and augmented reality (AR) media.

Historically, artists and designers have been at the forefront of experimenting with new technologies, and this is certainly the case with immersive tech.

The same goes for Calvium. Our team has been leading pioneering immersive experiences for over 20 years. Most recently, we worked with the National Gallery, University of Cambridge, University of Exeter and Zubr to create Hidden Florence 3D—an AR app that lets people walk around the virtual interior of Florence’s once-famous but now-demolished San Pier Maggiore – whilst in the physical interior of the National Gallery.

As immersive technologies like VR, AR, and mixed reality change how people obtain and interact with data, let’s take a look at seven really interesting projects in this sector – including our very own Hidden Florence 3D!

In order to bring VR to people outside urban centres, the BBC ran VR events in public libraries located in small and remote areas. The initial aim was to work with only 30 libraries, but the tour quickly grew to cover more than 150 libraries across the UK.

The BBC ran this programme across three seasons in 2019, allowing participants to visit the overgrown jungles of Congo in the first season, step inside the TARDIS in season two’s Doctor Who: The Runaway, and get transported back in Nazi-occupied Europe in season three’s 1943 Berlin Blitz.

With 96% of participants saying they found the experience enjoyable, this project also became their springboard for learning as participants expressed intent to learn more about the subject at hand.

Although there are no new tours scheduled, you can view the first three seasons and several new stories on the BBC’s VR website.

One of the most important artists of the 20th century, Amedeo Modigliani is celebrated for his portraits and nudes that only found appreciation in the generations that followed his death. As part of Tate Modern’s Modigliani exhibition, visitors were able to virtually explore his Parisian studio, where he resided and worked before he succumbed to tubercular meningitis.

Since there were no photos of the studio, Tate Modern conducted rigorous research for five months, working with art historians and the team at Preloaded to accurately reconstruct the studio down to the last object. The result was made available through Modigliani VR: The Ochre Atelier, which eventually won a Wood Pencil at the D&D Awards.

One of Calvium’s highlights of 2019 was working with the Universities of Cambridge and Exeter, the National Gallery, and Zubr to create and launch Hidden Florence 3D. This AR-based app allows users to visit the interiors of San Pier Maggiore—one of the grandest and most famous churches of the Florentine Renaissance—with the help of their Apple devices.

Although the church was demolished in the 18th century, the team was able to recreate the entire church by looking at reliable sources, such as the Italian Painting Before 1400: Art in the Making by Professor Jill Dunkerton, site surveys, historic plans, and old city views in paintings.

You can download the app from the App Store and enjoy the AR experience inside your home or visit Room 60 at the National Gallery.

Bassins de Lumières is set to be the largest digital art centre in the world once it opens on 17 April 2020. Bordeaux’s former WWII submarine base will transform into a spot for immersive digital exhibitions, where visitors can ‘walk in’ and wander around the works of some of the biggest names in art history.

Apart from projecting thousands of digitised photos on the bunker’s massive steel and concrete architecture, the same photos will also be reflected on the waters flowing through the bunker’s enormous basins, giving the centre a new dimension to the immersive experience.

The brainchild of award-winning digital arts group Squidsoup, Submergence is a large-scale interactive light installation built with thousands of individual points of suspended light that constantly shifts colours as visitors walk through them.

First created in 2013 at The Eye, another incarnation of Submergence was installed in Millennium Square for three weeks last December.

Seattle’s Museum of History and Industry (MOHAI) created a holographic tour of Mont-Saint-Michel, a medieval French monastery situated at the top of a remote island in Normandy.

Made possible by Microsoft AI and the HoloLens 2, visitors can now virtually walk on the island, see the insides of the citadel, and view its Gothic design up close. This is the first time that this rare 17th century relief map from Musée des Plans-Reliefs is put on exhibit in North America.

Diving into one of the smallest particles in existence, Nohlab Studio created Journey—a four-minute immersive audiovisual experience that tells the story of how the human brain turns photons, the light particle, into perceivable forms. The journey begins with the formation of photons, its travel from a light source to human eyes, then to the brain, and finally, its transformation into forms and images.

Created by Culturespaces Digital to compete in the Immersive Art Festival in Paris, the exhibit used a total of 140 video projectors and 50 speakers to turn Atelier des Lumières into an immersive experience. Journey eventually won the Grand Prix, Jury Special Prize, and Best Sound Design Prize.

As with any industry that’s still in its relative infancy, the immersive tech sector is bound to hit several barriers, such as the lack of talent to meet growing demand, lack of business models, as well as device availability and penetration. That being said, I have huge optimism about the potential for this sector to massively impact the ways in which people communicate, work, and play.

Indeed, last week I spoke at an event run by the Worshipful Company of Information Technology; the theme was digital technologies to enhance museum and gallery interpretation. In evidence was a wealth of real-world examples of immersive technology being embraced by the arts and cultural heritage sector to create compelling content of all types. For instance, the Royal Opera House and Historic Royal Palaces are institutions seemingly worlds apart, but they are both harnessing immersive technologies to push the boundaries of expression.

As ever, I ask for the creative and judicious use of technology and recommend that technology doesn’t take the lead.