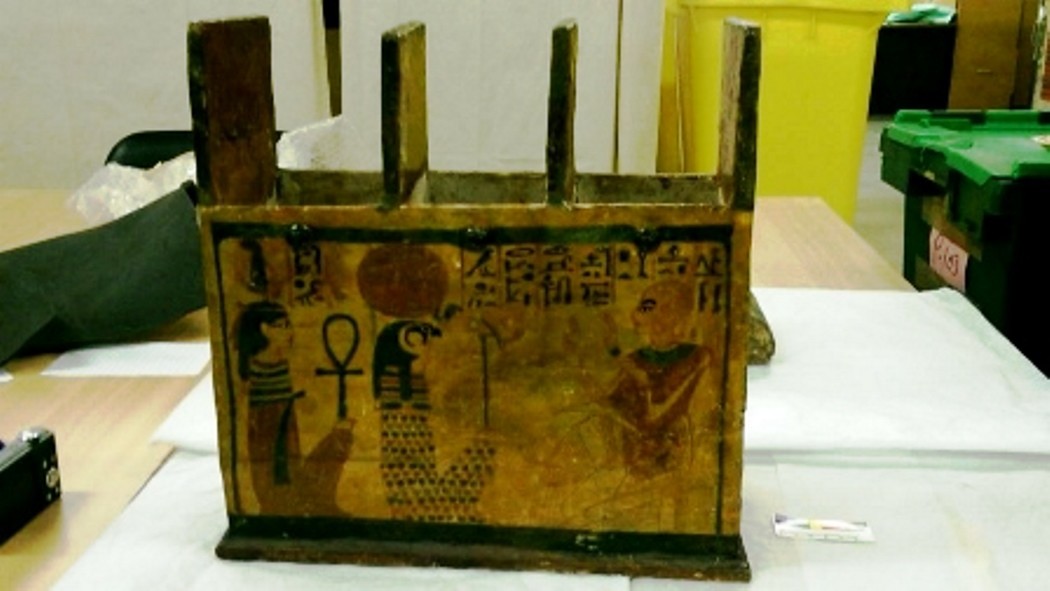 Moving up the career ladder: the hectic life of a budding curator and Egyptologist

Stacey Anne Bagdi is budding curator who is breaking through in the museums sector as a volunteer learning co-ordinator at The Pen Museum, and volunteer curatorial assistant and visitor services assistant at Birmingham Museum and Art Gallery. In October 2014 she followed her passion in Egyptology by establishing the West Midlands Egyptology Society, which she now chairs.

During my BA in Archaeology and Ancient History at University of Birmingham, from 2009 to 2012, I always knew I wanted to work in a museum with an Ancient Egyptian collection. It didn’t matter where in the world the museum was but I knew I wanted to be a curator.

Following on from gaining my MA in Egyptology from the University of Leiden and building up the academic knowledge within museums, I confirmed this career choice even more.

When I arrived back in the UK in 2013, I continued my part-time retail job (at the busiest time of year- Christmas) but I knew I had to get stuck in doing some sort of volunteering within museums to eventually move up the ladder

I had emailed Birmingham Museum and Art Gallery (BMAG) a few times about volunteering during my BA years but unfortunately had no luck (too much competition).

However, in October 2013, after completing my MA, I thought I would try my luck again and email Adam Jaffer, curator of World Cultures (including Ancient Egyptian collection) at BMAG, directly.

I have also learnt about conservation and I am currently assisting with 150 condition checks on the ‘Secret Egypt’ travelling exhibition which is set to go to Shrewsbury in January. Documentation is also important and I have created a spreadsheet to add to the current database – a site list was produced to determine which Egyptian sites were represented in the collection; this is very useful for when we get requests from researchers.

I have also passed this knowledge on by assisting with school activities based on Ancient Egypt including running an object handling session during half-term. The list could go on, I am always very busy but I am thankful to Adam, who always ensures I work hands on with the Ancient Egyptian collection in any way possible.

In November 2013, as well as volunteering with Adam at BMAG, I also met with the managers at The Pen Museum to start volunteering there as learning and events co-ordinator.

The Pen Museum is a small charitable trust museum which is run entirely by volunteers and preserves the history of the Birmingham Pen Nib Trade, which in the mid-19th century was the world centre for steel pen and steel nib manufacture with more than half the steel-nib pens manufactured made in the city.

My main roles are creating a schools programme at the museum, increasing the school groups we get in and engaging with the local community by running events and workshops to attract new visitors and age groups.

In July I organised the museum’s first Summer Fair where 200 people came through the gates and we raised £600, which is really beneficial for the museum and we are always looking for new ways to raise money as well as awareness.

This time I was successful and he accepted me as his volunteer and since then I have been volunteering solely with the Ancient Egyptian collection every Wednesday. Then in February I got a job as front of house assistant at BMAG, which meant I could finally leave my retail job of four years and actually start building up my career in museums from the bottom up.

This Christmas I am organising the museum’s first ‘Nibs by Candlelight’ event which will include carols sung by Birmingham Festival Choral Society visit www.penroom.co.uk for more details. We are also running six drop in sessions of Christmas crafts to attract more little ones into our museum as this is the age group we fail to attract otherwise.

One of the events we ran more recently to attract more children into the museum was #TakeoverDay organised by myself but developed nationally by Kids in Museums.

This was also a first for us so we were excited to be part of a nationwide event. I invited 10 students from Perry Beeches II secondary school to take part on Thursday 20th November.

I strongly believe this is the best way forward in gaining a higher position in museums, as you need to understand the overall picture of how museums operate to allow you to understand your role in whichever department you go into.

From volunteering with Adam, I have undertaken many tasks and learned many skills including object handling (this year we removed all the objects our the Ancient Egyptian gallery to allow for construction Staffordshire Hoard gallery below, which opened on October 17th) and also created a temporary display during.

They took over The Pen Museum, quite literally and took part in loads of hands-on activities from creating an exhibition case, object handling, guiding visitors around, setting up the museum’s new instagram account and creating a piece of art work using our nibs and ink. They had a fantastic time and all those months of planning was worth it.

However, working in various museums in various positions all at the same time made me stop and think that even though I am volunteering as curatorial assistant in the Ancient Egyptian department, I felt I was not making the most of studying Egyptology, my true passion aside from museums. I noticed many people came into BMAG asking specifically for the Ancient Egypt gallery, so I thought to myself ‘most cities in the UK have an Egyptological society, except Birmingham’.

One does exist at the University of Birmingham but this is not open officially to the public. Therefore I had one of my crazy ideas (again) and decided I was going to set up my own.

I met with the students from the university who pointed me to a few people who tried to set one up before. I met with them to see how we could go forward but although they gave me great advice they did not wish to head up the society.

Therefore I advertised for people to join me through Twitter and gained a new committee within a couple of weeks and I officially founded the West Midlands Egyptology Society.

With my new committee members I was able to invite speakers and draw up a schedule for 2014-2015. This did not take long, from strong advertising (and asking some friends in Egyptology) we now have a full schedule from October 2014 to June 2015. I was overwhelmed by the support.

Our first public meeting was Wednesday 22 October at The Pen Museum. More than 20 people attended the first meeting, resulting in me being speechless and overjoyed as I had only set 10 chairs out.

We had our second WMES meeting on 12 November and just under 30 people attended. Again I was speechless (quite literally – this time because I actually nearly lost my voice from being ill). Many people have thanked me for setting it up because they have been waiting for such a society for years.

The main point I wanted to get across with setting this up is that although I provide academic speakers, the society is open to anyone with an interest, no expert prior understanding is required.

It is more of a platform where people can meet other people interested in Ancient Egypt, therefore I do encourage everyone to join us at the pub after each of our talks to network (mainly because the pub we go to has an Ancient Egyptian room).

We now meet every second Wednesday of the month and our next meeting is December 10th with a talk by John Wyatt about Birds in Ancient Egypt.

For more details please check us out on our Facebook and Twitter pages and our website, www.wmegyptology.wordpress.com. I am so excited about this adventure I really hope the society continues for many years to come.

As well as this, more recently I joined The Midlands Federation Council for Museums and Galleries as events assistant.

This is something I am really excited about because it is another place where I can put my skills in events into practice, meet new people within museums and make future, life long contacts.

As I am also learning so much about museums I am very much thrilled to be on the council to attend valuable events relating to current practices.

I also try to attend workshops, events and conferences to gain further knowledge in museums (no I don’t have much of a social life).

However, because I am doing so much now, and have learnt so many new skills, I am at a loss as to which direction I actually want to take. Is it possible to do it all? Or maybe I’ll work at Cairo Museum one day? Now that would be the dream.