So it started with an idea at the beginning of the year, ‘Wouldn’t it be great to travel for a few months'? Then an agreement was reached, plans adjusted, savings cranked up and four months later flights were booked.

I was heading off on a sabbatical from work, a six month trip around Thailand and Australia – what an opportunity. Having wanted to visit the land down under for more than 10 years the excitement was palpable. My boyfriend Tim and I set off from an unexpectedly sunny UK in July and made our way on what would be the trip of a lifetime.

Keen to take a look into the cultural world overseas one of the first rules of the trip was that we would always make time to stop and look around any museums, galleries or cultural centres that we passed on our journey, which has led to some pretty interesting discoveries.

Our first stop was Bangkok and what a city! Noisy and crowded, teeming with life on every street corner, it really is an assault on all the senses.

The best way to feel instantly like a local in Bangkok is to find a restaurant on a narrow side street – that could possibly pass as a garage by day – grab a pew and enjoy whatever the chef points to. 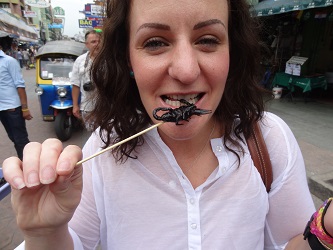 As well as taking in the cultural sights, Sara also tried out local delicacies such as scorpion on a stick

Failing that get your full tourist on in Khao San Road, buy a barbecued scorpion on a stick (yes really) and then get a massage on the street, bliss (if ever so slightly unsettling). 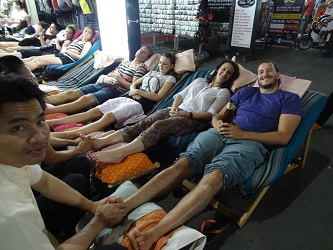 An unusual but not unwelcomed respite from the busy Bangkok

Once we had settled into life in Bangkok we let ourselves loose on the sights. Some of the greatest sights in Bangkok are the temples that adorn almost every street corner.

Their beautiful bright colours are truly stunning and in stark contrast to the high rise, ramshackle cityscape that surrounds them.

Our cultural education began at the Siriraj Medical Museum, which has the well-deserved nickname: Museum of Death.

It is actually a collection of medical museums which are both gruesome and morbidly fascinating and certainly not for the faint hearted.

In particular the exhibition of babies with birth defects in pickling jars (seeing is definitely believing in this case), the mummified body of first known serial killer in modern Thai history, Si Ouey Sae Urng, who was also a cannibal who preyed on children in the 1950. 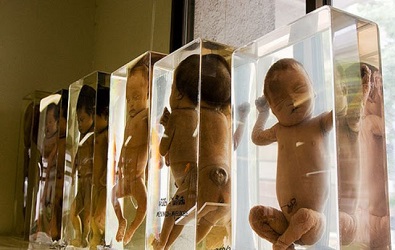 The Siriraj Medical Museum, or Museum of Death as it is otherwise known is gruesome but facinating says Sara

Then in the Forensic section there is a gallery of gruesomely graphic accident and homicide victims (often including the actual body parts).

The section that I most enjoyed at this museum, because of its emotional connection, was the temporary exhibition which explores the role of the Siriraj Hospital faculty during the 2004 tsunami that devastated the west coast of Thailand and other countries.

A video exhibit which interviews the doctors and nurses who were on the ground was a fascinating insider look at the devastating events and the aftermath.

It is a weird and wonderful collection, unfortunately sometimes lacking in English interpretation, but was absolutely one of my highlights of Bangkok. 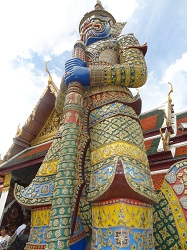 A guard stands watch outside a temple in Bangkok

Next stop was the King Prajadhipok Museum, which chronicles the last king and queen of Siam before a military coup forced them to find exile in England.

Not knowing much (if anything at all) about the monarchy of Thailand, it was a fascinating exhibition and I particularly enjoyed the focus on King Prajadhipok’s (Rama VII) wife Queen Rambhai Barni, who outlived him and dedicated her life to her country and to the education of its children.

The Museum had excellent interpretation for English visitors and this was not as intrusive as you might think and I found it certainly didn’t interfere with the storytelling.

Next cultural stop, and very different from the previous two sights, was the 31st Exhibition of Contemporary Art by Young Artists at the Art Centre, Silpakorn University.

This is a fantastic space to showcase some incredible pieces by young up and coming talent in this area.

We meandered around all floors of this exhibition for a whole afternoon and were blown away by some of the pieces. Far and away a favourite of mine was the face created out of multi-coloured straws. 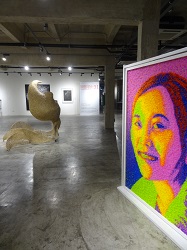 One of Sara's favourite stops in Bangkok was the Art Centre, Silpakorn University where this artwork made of straws caught her eye

The rest of our trip through Thailand was mainly spent diving, exploring the much more sedate north of the country and enjoying the weather before heading off to Australia to continue our travels … more soon …