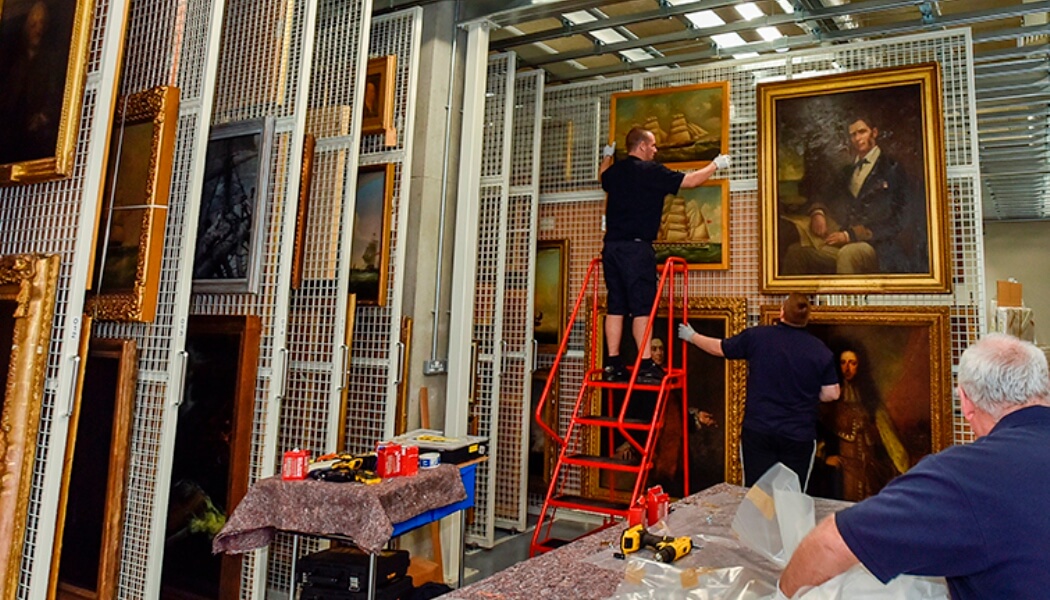 Marketing and communications at Constantine

In 2018 Constantine were asked to work on an exciting four-month museum storage project to decant the contents of the National Maritime Museum’s fine and decorative art store, and transport all objects to a newly built storage facility called the Prince Philip Maritime Collections Centre

Here is the case study of how our fine art technicians moved an incredible variety of items, including small and large-scale globes, paintings, delicate textiles, decorative ceramics and glass. Each piece had to be meticulously and carefully documented, packed and transported to the new site

We began by conducting an onsite survey. At the initial tendering stage there was only enough time to provide an overview of the collection requirements. When the project was confirmed, Ben Sparkes our Technical Manager re-visited the site on multiple occasions with the museum staff to gather extensive information on all aspects of the move.

Fortunately, no major changes to the planning process were necessary once the project began. There were occasions when the schedule needed to work alongside other contractors to allow for the de-install and re-install of existing storage furniture and racking that was being re-used in the new stores.

Evaluation of the Space

As the timescale for this entire project was relatively short, we conducted a week of preliminary soft-wrapping of paintings on the old site before the main decant began in January. Once the project commenced in full, our technicians had the physical task of preparing and transporting oversized objects to the new store. This procedure was essential so that we had a greater amount of space to work within the old facility and it provided a clear run to the loading bay shutter, which was our main point of access.

Jennifer Crothall from the Royal Museum Greenwich recalls there were many storage improvements achieved through the construction of the PPMCC. Some of the developments are outlined below:

Throughout this project some existing storage furniture was re-purposed to facilitate the move. For example, wooden plans chest drawers could also be used as transportation containers for the objects and double-handling avoided. Some simple bespoke solutions to adapt this furniture were created to ensure no damage occurred in transit.

As trollies, containers and other materials were being re-used on rotation, their availability drove much of the scheduling. Each collection was unpacked and re-shelved in the new store and resources were returned to the packing team to continue the decant. Time in-between this turnaround was occupied by packing and preparing objects from other collections. As around 70 paintings were to be permanently stored in transit frames once the moves were complete, we re-used these frames up to five times beforehand for economy and sustainability purposes.

Artworks took a large amount of time to pack and transport. There were three reasons for this. The works had:

There were approximately 250 framed works that required packing and transportation in transit frames. Some objects had to remain flat in transit so we produced four large ‘drawer’ trollies with one open side and multiple shelves within. This ensured a range of objects such as mounted prints and drawings, plan chest drawers and oversize solander boxes could be moved within these and packed for transit.

Due to their fragile nature, one collection that proved the most time-consuming to pack and move were the globes. They varied in size from pocket globes already packed in their own boxes, to globes 1.5 x 1.5m wide that required a fork-lift truck to remove them from the mezzanine floor. There were specific considerations with the handling and packing method of every individual globe. We supplied one large crate to be re-used for the four largest globes, plus various smaller lightweight crates, and trolleys to be used multiple times for different items.

The challenges of the building were predominantly the mezzanines. One unit did have a lift but it arrived over half a metre above ground level. To resolve this, we provided staging built in pieces to allow a simple loading of our vehicle direct from the lift. Where the older store had no lift to the mezzanine level, our team had to complete a vast amount of manual handling up and down the staircases. A major change we made to the move methodologies was to use a fork-lift to lower packed metre crates full of books to ground level from the library located on the mezzanine. The combined weight of this part of the archive totalled over 30 tonnes, so the physical wear and tear on our crew carrying packed crates of books down stairs would have been unacceptable.

As is common with a project of this size, we relied heavily on the experience of our technical staff to problem solve as they go. Many of the day-to-day issues were handled by our on-site team and the long-term planning of resources and preparation was completed before we moved on to a new collection.

As the core members of the teams remained the same throughout the 4 months, everyone saw the project through to completion. For the packing team at the old store, there were some opportunities to see the new site filling with the objects they had handled. The technicians slowly realised they were a major part of the re-storing of a collection in a new purpose-built facility and that the gradually emptying space of the old store would soon become obsolete.

Everyone involved felt a moment of pride when it was revealed we had successfully moved 37,000 objects and approximately 2,500 linear metres of archival materials. This was a poignant project for our team and we were privileged to have been a part of an event marking an exciting new chapter for the museum.

See how our technicians completed this ambitious project by viewing the film, here.

You can also read more about the relocation by visiting the Royal Museums Greenwich website.