The Future of the Past

Culture Coventry is the independent trust that manages four great museums in Coventry. Gary Hall was appointed as the founding Chief Executive in March last year and has made his mark as a dynamic force reinvigorating and reinventing the portfolio.

The four Culture Coventry sites are The Herbert Art Gallery and Museum, Coventry Transport Museum and The Priory Visitor Centre in the city centre and the Lunt Roman Fort to the South. The Lunt has long been the Cinderella of Culture Coventry to the Godiva of The Herbert and now the Lunt will finally get to be the star at her own ball. <photo>

Gary Hall has instigated LudiLunt, a museum hackathon, to start the revival of the Lunt Roman Fort. Museum hackathons, wikithons, unconferences and museum camps are becoming a well-practiced way to develop new ideas. I interviewed Gary Hall about LudiLunt to discover more about this event in September.

Why do you need a hackathon to revive Lunt Roman Fort?

At the end of 2013 Culture Coventry commissioned a feasibility study into the long-term development of the Lunt. The feasibility study looked at a number of options and then came up with some recommendations. These fall into two phases; the first phase is to upgrade the current museum and retail offer and tidy up the access and interpretation around the site. Phase two is rather more ambitious because we would like to build one or two more buildings on the original roman foundations and also rebuild the ramparts that are currently dilapidated.

The recommendations from the feasibility study are great but what I also want to explore is whether the public and other interested groups can come up with some innovative suggestions on how we can improve the visitor offer still further. We have therefore decided to hold a Hackathon to generate even more ideas, building on the experience and creativity of groups of interested parties.

What will set LudiLunt apart from other museum hackathons?

In many ways, LudiLunt offers a near blank canvas to work with.

As the Lunt was built from earth and wood, there are no original structures to see, but from archaeological investigations, we have a good understanding of what was probably at the site, whilst reconstructions from the 1970s offer a glimpse into what the Fort may have looked like.

With the space we have available at the Lunt, there is terrific scope for participants to develop wide-ranging ideas to bring the fort back to life for visitors of all ages.

We have no preconceived view about what successful ideas will look like. They could involve the use of technology, but they don't have to. Ideas could be small, medium or large. They could be really simple and implemented straight away or they could require significant time, effort and investment.

Through the varied skills, background and experience of the participants, we hope to see teams form around the ideas being developed over the weekend. Ideas will be thought up, bounced around, explored, built on and fleshed out.

Not only will we be able to call on help (technical and otherwise) over social media and the internet, but we are also planning to have expertise and specialist input on site and through live-streamed link-ups from around the world, including Rome and Pompeii.

Will the participants just be a bunch of geeks?

Absolutely not. By combining the ideas, skills and experiences of a diverse set of people, we hope to ensure the weekend sparks novel, interesting and exciting ideas for ways to bring the Lunt Fort and its rich history back to life, making it more accessible to a wider range of visitors.

We are therefore looking to recruit people with a range of skills, including historians, artists, hackers, gamers, coders, writers, performers, designers, engineers, social media whizzes, educational professionals and craftspeople – as well as anyone who feels that they have ideas to contribute to a weekend of innovation and creativity

Why should people participate?

In return for participants' efforts, they will have the unique opportunity to spend a weekend with other creative people at this amazing location, camping, eating and working in the grounds of the Lunt.

From an individual perspective, participants will have the chance to work with others, sharing ideas, knowledge and experiences, so LudiLunt offers an exciting forum for learning, self-development and personal challenge – and all in a fun, supportive and collaborative environment.

Many of the ideas developed during the hackathon will have relevance to other arts, culture and heritage venues so there is a great opportunity for museum professionals and volunteers both to make great new connections and to apply some of the ideas back home.

There will also be prizes for the best ideas generated over the course of the weekend, as well as the potential to be involved in the implementation of selected projects.

Where else is there the opportunity to camp in the grounds of an actual Roman fort, have fun and help preserve, protect and revive a venue of historic significance?

When will the good ideas generated by LudiLunt be given the support and backing to be realised?

The aim of the hackathon is to generate innovative ideas that can either be implemented immediately or in the medium- to long-term. Implementation will be subject to budget availability so we may need to raise funding for the big ideas. We really want to bring the Lunt back to life so the outcomes of the Hackathon and the conclusions from the feasibility study should put us in a great position to realise this ambition. 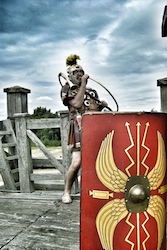 Lunt Roman Fort was constructed, rebuilt and abandoned very early in the history of Roman Britain. Unlike the more enduring forts on Hadrian's Wall or even York and Chester, Lunt was built from timber and earth, leaving no standing archaeology. Successive archaeological investigations have revealed a complex history of buildings and a wealth of finds including a marvellous charm from a horse harness.

Forty years ago, the gateway, granary and gyrus were reconstructed on the original footings by a team of Royal Engineers. They still stand sturdily today, a testament to the original Roman design and the building skills of the Sappers. The three structures are extremely impressive in size, especially since they are totally timber constructions, including the gyrus. This is the only example of a training arena within the walls of a fort anywhere in the Roman Empire. The gyrus alone shows how unique and intriguing the site is.

The granary is an excellent museum, packed with information on the history and archaeology of Lunt but it is all presented in a traditional way. All the content is ripe for representation using novel ideas and concepts generated at LudiLunt. Apart from the reconstructed buildings, Lunt is a rather blank canvas compared to sites such as Vindolanda or Wroxeter. This blank canvas could be coloured with Augmented Reality, artworks, drama or experimental archaeology. It is going to be very exciting to see Lunt blossom from seeds sewn at LudiLunt.

The timing for LudiLunt could not be better as the new national curriculum starts that very week with Boudica featuring in KS2. Techno-Boudicas of today can make their mark on Roman Britain, hopefully with sharp ideas and not blade-wheeled chariots!