In November 2014 students taking part in Kids in Museums at The Pen Museum in Birmingham’s Jewellery Quarter set up an Instagram account. Four months on, volunteer Stacey Anne Bagdi talks about how it has proved to be an exciting addition allowing the museum to connect with museums around the world

On 20 November 2014 The Pen Museum held it’s first ‘Kids in Museums’ Day with 10 students ranging from year 7-10 from the nearby Perry Beeches II school.

Kids in Museums day is nationwide event that takes place annually to promote the importance and value of young people’s opinions of museums and galleries. It’s a day when young people are given meaningful roles, working alongside staff and volunteers to participate in the life of the museum while also gaining valuable skills.

As it was the first time The Pen Museum was taking part in the event we wondered what to do with our young people. Eventually we decided to spilt the children up into pairs and put each pair in a different department of the museum with the guidance of a volunteer. We had a collections department checking for bugs, mould and the condition of our archives; a front of house department which developed our tours, guided visitors around and designed a new guide book for our volunteers; an exhibitions department which evaluated our current exhibition cases and put together their own exhibition; a design department made up of two artists who designed a piece of artwork for the museum and finally a marketing departing which helped us create promotional material for the future of the museum including posters and leaflets.

A selection of student Instagram posts from Kids in Museums Day 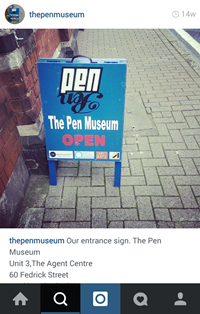 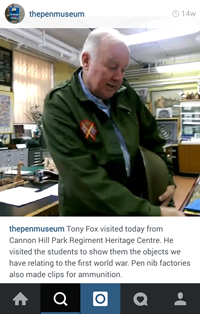 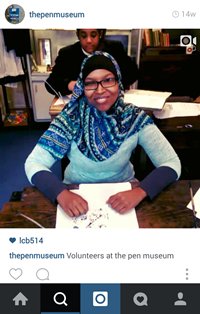 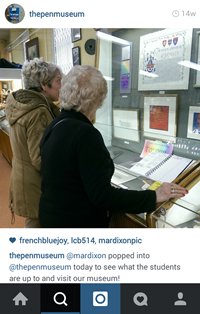 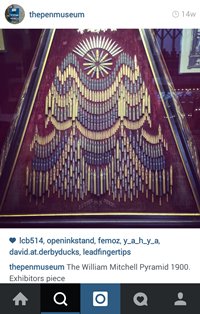 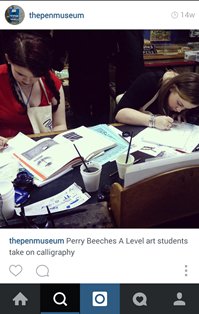 One of the challenges of working with young people is giving them tasks which would capture their imagination and keep their attention, in this case, for the entire day. We ensured there were plenty of activities going on in each department so that was not a problem. We also allowed them to be free in whatever they did. We outlined the basic task but we gave them the freedom of doing whatever they wished.

One of the really great things that came out of Kids in Museums day for us was an idea developed by the marketing department. We had set them the task of engaging with social media and it was not until we discussed it with them beforehand that we all agreed setting up an Instagram account, which was ideal us and exciting for them. The Pen Museum had never thought about such a thing before and there are very few museums within the UK that own an Instagram account. Therefore we thought why not? We handed them a phone and off they went!

Since November our Instagram is continuing to develop. We try to post a picture once a week and this is automatically linked to our Twitter account which we have a great following already. One of the most wonderful things for us was that it was only until a volunteer searched for #penmuseum that we found a bunch of other Instagrammers snapping away in our museum! From this we have discovered a whole load of new followers and made some great contacts with Instagrammers who have taken pictures of their visit at the museum, from all over the world.

Instagram is a great tool for promoting a museum in general. However, we’re just catching up, our fellow Instagrammers have already been doing it for us for a long time before we hopped on board! 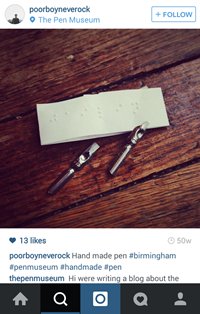 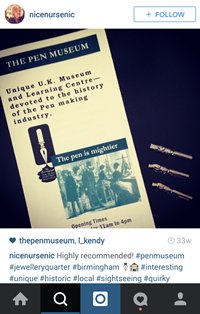 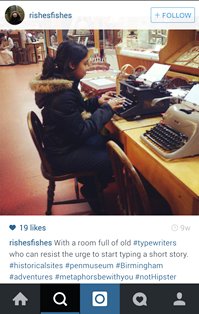 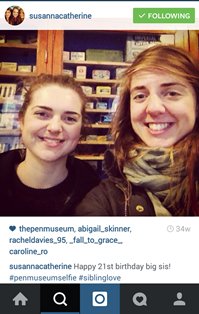 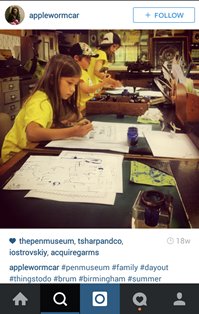 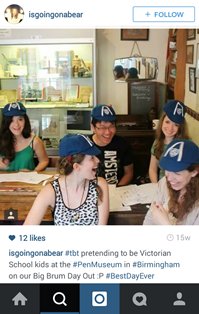 It’s been even more exciting for us to follow new people based on related hashtags such as #calligraphy, #pennib, #quill and #writing. We have found some exciting things on Instagram from pen nib earrings and jewellery, to professional calligraphers around the world, to the Museum of Islamic Art in Doha stocking our partner Manuscript’s [which has links to once prominent Birmingham pen nib company D.Leonardt & Co] pen nibs with Birmingham written on the box.

All this is very exciting for us! We really hope to get more volunteers involved with uploading more pictures on our account to spread the word of The Pen Museum and thus the importance and significance of Birmingham being at the forefront of pen nib-making throughout the 19th century.