July was a busy month in the museum world with the opening of the remodelled Imperial War Museum, a Museum Summit at the National Gallery and the announcement of this year’s Museum of the Year Award. Now that August is upon us, the schools are out and the excellent summer weather encourages people to the beach, museums and galleries offer havens of cool and calm refreshment for the soul – an escape from the hubub of the streets and airports. August also marks the start of a year-long commemoration of the First World War.

Starting at the Imperial War Museum

Your blogger was much impressed by her first visit to the Imperial War Museum for the press view, followed closely by another visit with the world and their children. Quite a lot has been written about the transformation, particularly the atrium extended downwards to the basement – now Level 0. It’s a magnificent sight as you look down from the entrance staircase and once you are down in the “well” a Harrier jet, a Spitfire and a V2 rocket hover high above suspended from a grey canopy. From the open galleries on each floor above objects poke out – sometimes surprising – a rowing boat and a wooden horse for example – joining the conversation as the curator put it. At floor level all aspects of war are represented from the wrecked car blown up in Baghdad to a dusty four by four used by the press. The staircases at either end of the atrium are painted in a heavy grey adding to the somber atmosphere. 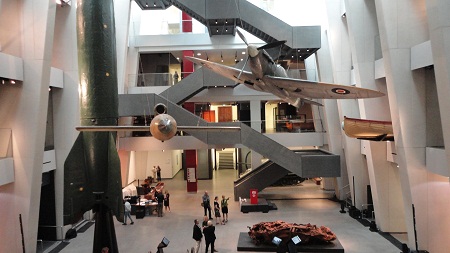 The entrance to the new First World War Galleries is on this level and takes you straight into the diplomatic action which preceded the war. On my second visit there was a long line of people queuing with timed ticketed entry (but still free) introduced at busy periods. The story takes you on a meandering path passing displays tightly packed with objects and a lot of text, some curiously on standing labels, providing interesting information but also intrusive, perhaps slowing down progress. Wall-mounted photographs create the setting for the simplest of objects – a can of meat for example – and there are voices, newspaper cuttings and film clips. I looked for the trench, having vivid memories of the Trench Experience, but as Diane Lees, Director General, pointed out that was something from an earlier era. Just getting rid of the smell was a problem! It is now a sanitised walk through a grey walled passage with a shadow play of soldiers and a Sopwith Camel plane hovering above. Perhaps more in tune with the overall interpretation but no more atmospheric than an “office foyer” as Maev Kennedy put it in the Guardian. Children looking for thrills will have to go elsewhere. 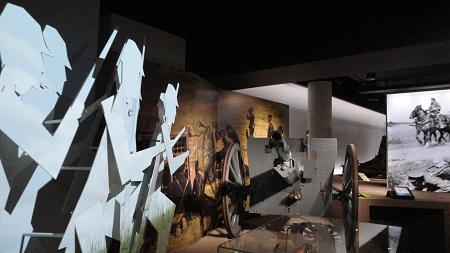 Also refurbished is the art gallery, the setting for the largest ever exhibition of paintings from the First World War. These are outstanding works and the gallery floor offers a quiet refuge on busy days and despite the subject, refreshment for the soul. Which takes us to the new, comfortable and much enlarged café – just about coping with the onslaught on a summer Monday.

At the Fitzwilliam Museum a small collection of hand-coloured lithographs tell the story of the first months of the First World War from a French perspective. These pictures were commissioned as public information or propaganda, designed to assure the public that the French were doing well and that the war would soon be over.

They are rather cartoon like in their bright colours and depict some extraordinary events such as the first recorded aerial combat in October 1914 when a Voisin biplan shot down a German Aviatik. The bombing of Rheims Cathedral is shown with two French cuirassiers on horse-back – part of the only cavalry regiment to go to war in 1914 – wearing distinctive helmets with long horsehair manes. In another print a German soldier is shown in bright red – on fire – and later the English command are having their 5 o’clock tea, while French soldiers enjoyed free wine from patriotic local farmers. It seems that the attempt to make La Grande Guerre look like a picnic ended as the war entered its second year, when the picture series ceased.

A Museum Summit in London

It was perhaps a billing that it could not possibly live up to, particularly when it was just one afternoon. But the Art Fund first attempt to place the Museum of the Year Award into a context of discussion about museum issues is to be applauded. Chris Smith, Lord Smith of Finsbury, is the new chairman of the Art Fund and declared the Horniman Museum to be his favourite! While some of the panel discussions which followed got bogged down in familiar issues such as free versus charging museums others tapped into the more current debate on London versus the rest of the country. The most interesting discussion was on museums as agents of social change.

Munira Murza, Deputy Mayor for Culture, GLA expressed her concerns about museums pursuing the benefit agenda. Maria Balshaw, Director of Manchester Art Galleries agreed, “social work” is not what we do, but we make people happy by providing enjoyment, pleasure, illustrated by art work, provoking curiosity and laughter and discussion. The panel on the whole agreed that museums should stick to their usp, take pride in their expertise, and build social relationships with their visitors, including taking works outside the museum. We are not the department of social services, as one museum director summed up.

Later also at the National Gallery, the most un-museumlike museum won the Museum of the Year Award of £100,000 – the Yorkshire Sculpture Park – well deserved!

Ylva French is a trustee of the Museum Prize Trust.