1914: When the World Changed Forever at York Castle Museum

Share
The terror of total war and its revolutionary impact on life around the world is the focus of a major exhibition on the First World War at York Castle Museum this summer. 1914: When the World Changed Forever takes visitors from the recruitment office to the horrors of the frontline - from the Zeppelin raids happening at home to the thousands of men defending countries they had never stepped foot in. We spoke to Richard Lloyd of RS Heritage, responsible for the design and build of the exhibition.

The exhibition is the central part of a £1.7 million project at the museum, with the majority of the funding from the Heritage Lottery Fund (HLF). It combines new technology with the museum’s extensive military, costume and social history collections, including many fascinating objects which have not been on public display before. As well as telling the story of the fighting the exhibition also tells of the people of York who were caught up in the war.

“The First World War changed nearly every aspect of life in Britain and it revolutionised life around the world”, says Alison Bodley, curator of history at York Museums Trust. “It was the first global war and touched the lives of those far from the front lines of battle as people back home were forced to adapt their lives to help their country or the Empire they were part of. By the time it was over eight million people had died. The war’s legacy created new opportunities as well as threats and the world map changed forever as new countries were born while empires crumbled.

“Through our fantastic collections and significant investment by HLF, we hope this major exhibition will not just be a commemoration of the war, but a more rounded and reflective look at how culture and society’s values were revolutionised.” 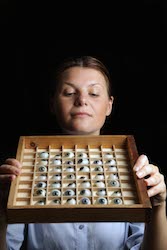 Four years in the making, the exhibition takes place in a newly created suite of exhibition spaces on the first floor of the museum. Iconic objects and personal stories are used to explore the outbreak of war and its impact on culture and society’s values. Starting by setting the scene in the golden age of peace and prosperity prior to the First World War, the exhibition explains how the complex pacts between European countries and their empires became the reason why so much of the world was brought into the war so fast.

“We started work on the project about two years ago”, says Richard Lloyd. One of the biggest challenges was working in a listed building which has long corridors and small rooms. It took a great deal of planning to make it all hang together.”

“The main corridor has been turned into a trench system where visitors walk from the English front line, over no-man’s land into the German trench and on into open woodland. We have encompassed the different aspects of the war in the trench.”

Visitors can head to the recruitment office to find out how to sign up for war before selecting one of five local people whose progress they can follow throughout the war. They then progress through a train carriage and find out what a Tommy took to war before being taken to an atmospheric recreation of a trench where they get a feel for the horrors which waited for the new recruits – from rats to foot rot, shell shock to gas warfare. Going “over the top” to the German trench visitors can see the differences between the two sides.

The exhibition also looks at the war at home in York, from the shock of the bombardment of Scarborough, to the terrifying Zeppelin raids, and the reality of learning to live with food restrictions and shortages.

“We have done a great deal of set work and scenic paintwork, says Richard. We worked very closely with the curatorial team to ensure that we were showing off their objects to their best advantage.” 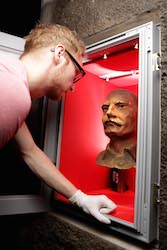 The objects on display range from the brutal to the moving. The teddy bear given to Alice Doherty by her father as he went off to war in 1914 before being captured and held as a prisoner of war, was kept by his daughter throughout her life. A papier mache ‘dummy head’ from 1916 is a very rare example of what was then a new innovation. These would be raised over the parapet to draw enemy fire and show where enemy positions were.

Richard Lloyd is particularly pleased with one of the areas towards the end of the exhibition. “We have created an area for reflection. It is very simply furnished with a small case in the centre which will have different iconic objects in it. We have surrounded the room on three sides with blackboards so that people can share their thoughts. Every day these boards are full of people’s reflections and it has been incredibly moving to read. It shows a real depth of engagement with the subject.”

Over the summer, the museum is also running a series of First World War activities for children. They can try trench food and learn about the soldiers’ diet, learn to decode messages in Morse code, try drilling sessions and undergo a ‘recruitment’ procedure.

The exhibition will be open for five years, changing to reflect the different events of the First World War throughout the period.