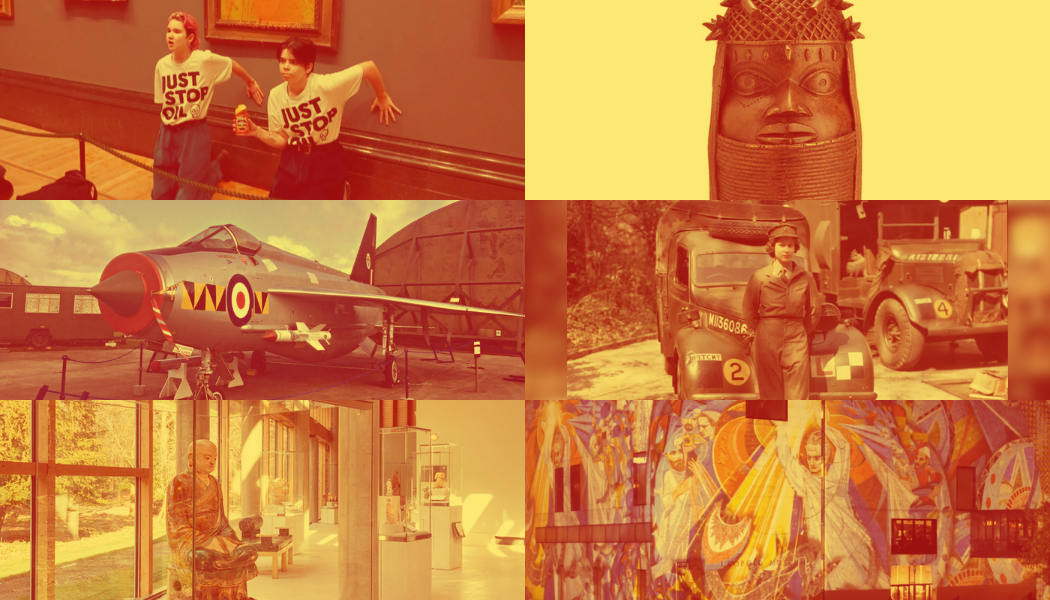 The museums and heritage sector in 2022 has been marked by a number of significant themes, and for the first time in years, the covid pandemic is not chiefly among them. A renewed focus on repatriation and climate action spread throughout the year, with major news events including the death of Queen Elizabeth, the war in Ukraine and an energy crisis leading the sector to adapt and respond.  Many of these themes have shaped the way that museums have operated and engaged with their audiences over the past year, and will continue to be important as the sector looks to the future.

The year began and ended with plans for the repatriation of Benin Bronzes. In January The Great North Museum: Hancock (GNM) revealed its plan to return what it had identified as a Benin Bronze to its country of origin, Nigeria.

The item, a brass stave with bird finial, was held in the museum’s ethnography collection and was taken from Benin City by the British military as part of the Punitive Expedition of 1897.

In April Glasgow City Council detailed plans for the largest repatriation of objects from within the city’s collections to their countries of origin. Plans for a number of artefacts from Glasgow Life Museums to be repatriated were announced, which included seventeen Bronzes from Benin, a ceremonial sword from India and belongings lifted from massacred Lakota people in America.

In May, Exeter’s Royal Albert Memorial Museum & Art was the location of a handover event which saw Chief Ouray Crowfoot and a delegation from the Siksika Nation in Canada take possession of sacred regalia. The items were taken to be redisplayed in the Blackfoot Crossing Historical Park, a museum focussing on Siksika cultural heritage and the preservation of their way of life.

Last month six objects looted from Benin City were returned to Nigeria from the Horniman Museum and Gardens in south London.

The objects – including two ‘Benin Bronze’ plaques from the royal palace – were handed to Nigerian officials in November at a ceremony marking the transfer of ownership of 72 items taken by force from Benin City in 1897.

And this month a Memorial Pole which had been on display at the National Museum of Scotland since 1930 was returned. The House of Ni’isjoohl Memorial Pole, brought to Scotland nearly a century ago, is in the process of being returned to its place of origin in what is now British Columbia, Canada.The move followed a visit from a delegation of Nisga’a representatives to Edinburgh in August, when a request for its transfer to the Nisga’a Nation was made.

2022 also marked another year in centuries of debate over the future of the Elgin, or Parthenon Marbles. The marbles, which have become talismanic of the broader repatriation debate, have this year seemed both destined to return to Greece and to remain at the British Museum.

In April, the Founder & Executive Director of Oxford-based organisation The Institute for Digital Archaeology shared with Advisor plans to meticulously recreate the marbles with robots and exhibit them. In November a replica of Selene’s horse’s head was presented at the Freud Museum in London.

In August The British Museum hinted at the formalisation of a partnership with Greece. Jonathan Williams, the museum’s deputy director, told The Sunday Times Culture magazine that a ‘Parthenon partnership’ could be arranged with Athens. But a month later, in October, former-PM Liz Truss said she did not support their return.

Earlier this month, the new Culture Secretary Michelle Donelan – appointed in September by Liz Truss and reappointed by PM Rishi Sunak in October – said the return of the marbles could signal a “slippy road” for an increase in repatriation. A 2023 decision about the marbles seems unlikely, and the debate rolls on. 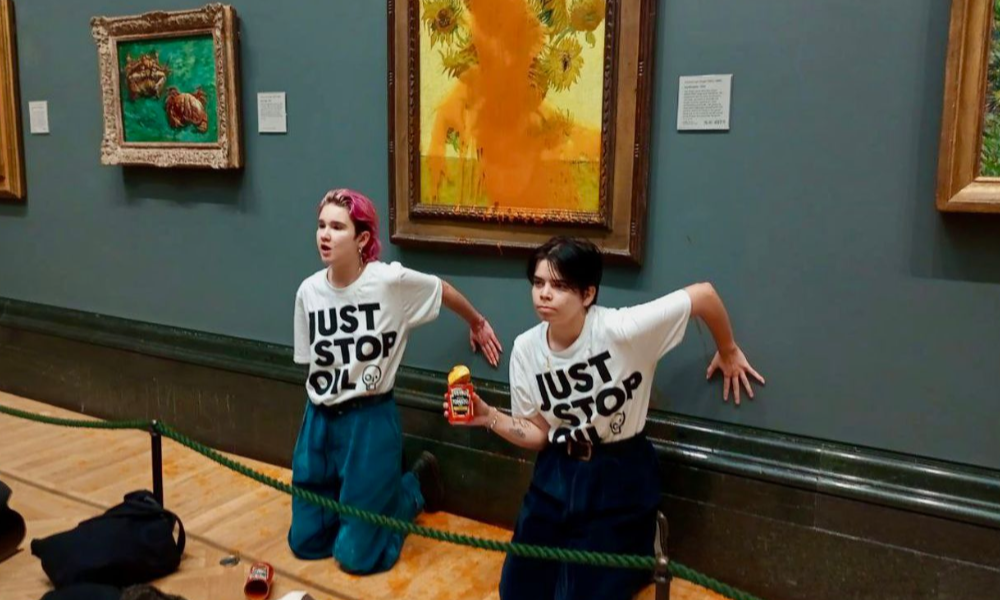 In February 2022, BP’s connections to culture continued to decrease, as the National Portrait Gallery confirmed that its partnership with the company would not extend beyond the year, when its current contract comes to an end.

In April over 300 people signed up to attend the “Make BP History” protest, organised by activist theatre group ‘BP or not BP?’, in response to news which suggests that the Director of the British Museum was seeking to renew the museum’s sponsorship deal with BP.

In July., over 400 teachers and educators wrote an open letter to The Science Museum, renewing pressure to drop its four fossil fuel sponsors and pledging not to bring students to the associated exhibition. The letter was coordinated by the Fossil Free Science Museum collective, a group of organisations in opposition to the energy company sponsorship deals made by The Science Museum Group.

In October, activists from Just Stop Oil threw tomato soup over Vincent van Gogh’s famous Sunflowers painting at the National Gallery, in one of many protests hitting not just museums but the wider world. Similar Just Stop Oil at the Kelvingrove Art Gallery and Museum in Glasgow, the Royal Academy, and Manchester Art Gallery signalled cultural organisations as a primary target.

The directors of 92 museums from across the world signed an open letter which called protests including works of art a “risky endangerment” of irreplaceable objects. 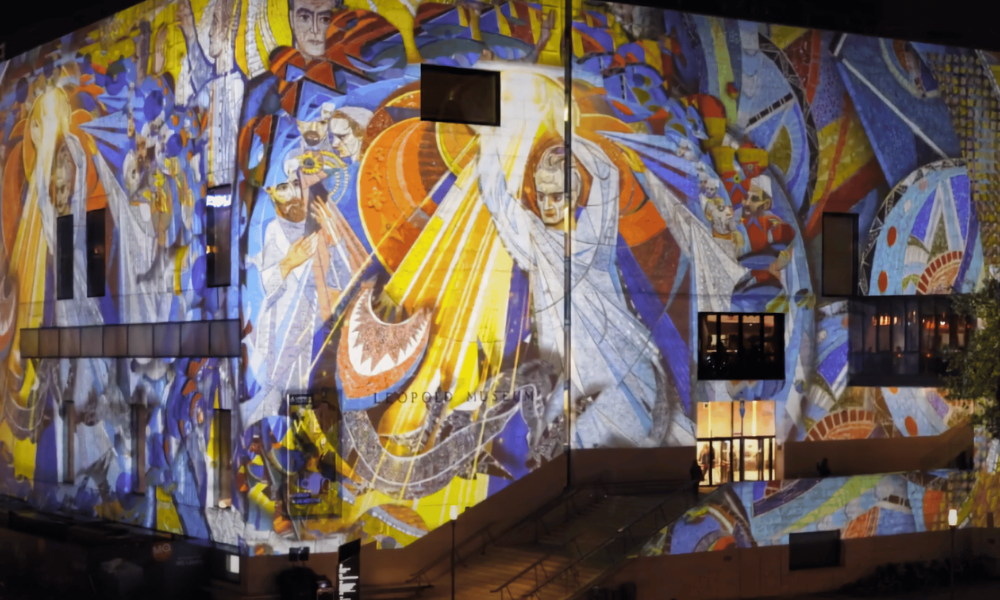 The War in Ukraine

In February the invasion of Ukraine began. The National Railway Museum was among the first of the cultural institutions to make changes to its schedule in response, cancelling its planned exhibition ‘Trans-Siberian: The World’s Longest Railway’, which was due to open in March 2022. The Science Museum Group Director Sir Ian Blatchford then handed back a Russian state decoration which was awarded to him by President Vladimir Putin in 2015.

Arts Council England (ACE) provided new guidance for museums planning to work with companies and artists from Russia and Belarus in response to the invasion of Ukraine.

Edinburgh Castle began providing audio tours in Ukrainian, as part of a wider initiative by the First Lady of Ukraine, Olena Zelenska, to have the Ukrainian language heard in prominent and famous places around the world.

By June, figures from UNESCO showed the damage caused to the country since the invasion began, with at least 12 museums among cultural sites damaged or destroyed.

In August, six months after the invasion began, new exhibitions and efforts were made by UK cultural institutions to celebrate Ukrainian art and culture. Among them was the British Museum, which set up a temporary display celebrating Ukrainian culture through the ages.

The death of the Queen

To mark what was then set to be the seventy year anniversary of the Queen’s first days in power – and the first time a British Monarch is to celebrate a Platinum Jubilee – events and exhibitions had been planned for the four-day May Bank Holiday Weekend in June.

In January, prior to her passing, the V&A, IWM and the British Museum alongside castles, cathedrals and royal grounds had revealed significant plans to celebrate the event.

Following the death of Queen Elizabeth II in September 2022, a period of National Mourning began which saw museums and heritage sites close. Tributes from across the sector poured in.

Reports in September, quoting sources close to the now King Charles, suggested that his new approach could see royal residences evolve from private spaces to public places, with Balmoral Castle potentially ‘opened up to the public’ with its first exhibition as early as next summer. 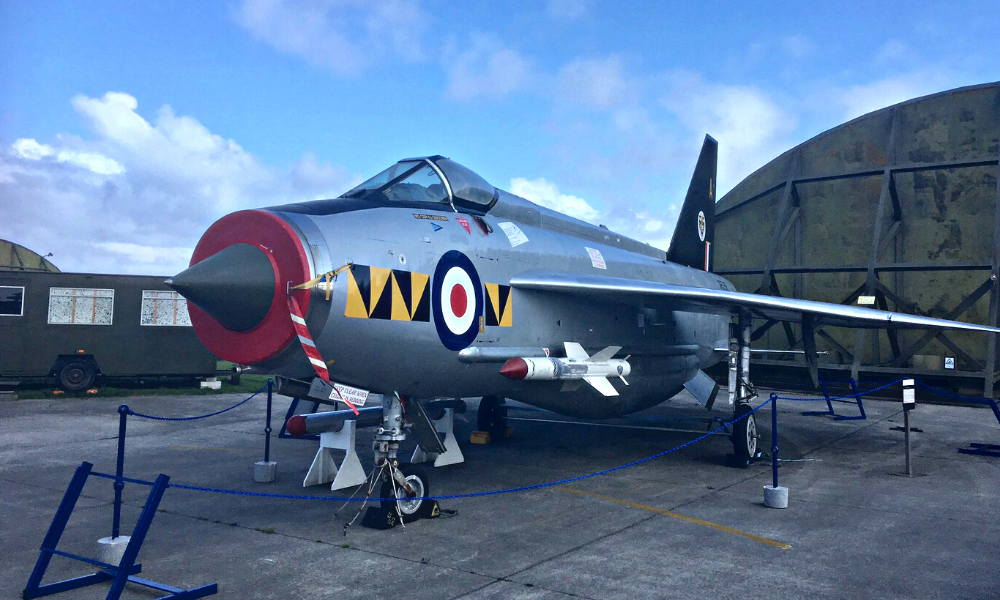 In June The Hull People’s Memorial Museum announced it was to permanently close, citing financial pressure and difficulties with its high street location. It said despite raising £200,000, the sum could not meet its financial requirements.

In the second half of the year, Cornwall Aviation Heritage Centre (CAHC) announced its closure in September, warning that its aircraft could potentially be scrapped, after its lease with Cornwall Council came to an end. The Centre is still battling to find a permanent location and a space for its aircraft, and is still collecting petition signatures.

Nottingham Castle announced its closure in November, less than two years after a £30m refit. Nottingham Castle Trust said low visitor numbers and increased costs had led to the decision, which followed the Trust going into liquidation.
Temporary closures this year included the Museum of London’s main site at London Wall, which ended in a schedule of music events and a 24-hour opening ahead ofits move to West Smithfield.

In January 2022, Art Fund announced that it would house Queer Britain in its first physical location in London. The museum, founded in 2018, is the first of its kind to in the UK to celebrate queer culture, and officially opened to the public in May.

Also in May, the completed restoration of Hay Castle in Wales saw it open publicly following a 10-year restoration and regeneration project. The 17th-century mansion was bought in 2011 by The Hay Castle Trust, and its regeneration was supported by £5million from the National Lottery Heritage Fund and £2m match funding from various trusts and individual donors.

In March The Burrell Collection reopened following £68 million, six-year refurbishment. Its inaugural exhibition, The Burrells’ Legacy: A Great Gift to Glasgow was announced in August, and was followed by a visit from King Charles in October to officially reopen the site.

Having closed in 2021, the Vagina Museum reopened at a larger Bethnal Green site in March. Through its search for a new site, the Vagina Museum connected with and secured a new location at ENTER, a collective building and creative hub for the arts.