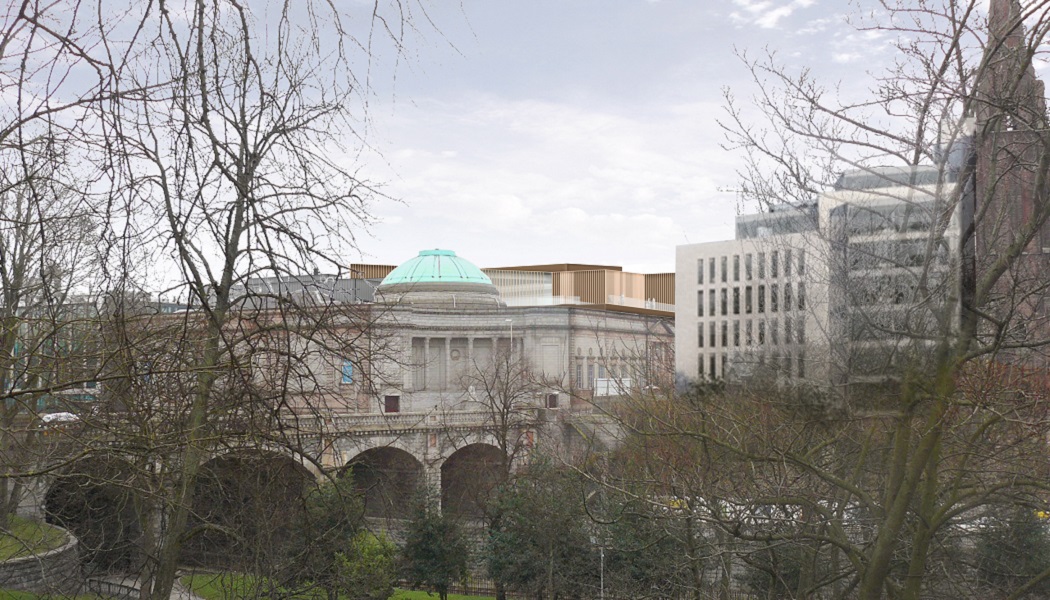 Ambitious, accessible and authentically Aberdonian: what to expect from the refurbished Aberdeen Art Gallery

Aberdeen Art Gallery is nearing the conclusion of its most significant redevelopment since first opening to the public in 1885. Undertaken as part of the wider City Centre Masterplan, the project aims to make the site one of Scotland’s most visited galleries.

We speak to Christine Rew from the gallery and Marie Boulton from the city’s council to discover how the scheme has unfolded, what the transformation will mean to Aberdeen’s cultural offering and the considerations of accepting BP sponsorship.

The doors to Aberdeen’s Art Gallery, Cowdray Hall and Remembrance Hall were closed in 2015, as a £34.6 million redesign – drawn up by Hoskins Architects and Studioarc – got under way. Four years on, the trio of conjoined cultural hubs are set to reopen.

The project has heralded alterations to the fabric of some of the Scottish city’s most iconic buildings, the installation of new exhibition and display galleries, vastly improved visitor facilities and, not to be forgotten, a refreshed activity programme in order to maximise the new surroundings.

The architects' vision of the renovated gallery, with copper rooftop extension © Hoskins Architects

The endeavour was conceived with the goal of restoring and reimagining the site, transforming Aberdeen from a city of local attractions to a global arts destination. Welcoming around a quarter of a million visitors per year is the ambitious target set by the institution and City Council; representing a large hike from the 169,000 which had previously been the norm. From the reopening on Saturday 2nd November they will discover just how feasible this aim is.

“What we wanted to do was not just update the Art Gallery but to renovate all three sites to create a really exciting visitor attraction,” Christine Rew, manager of Aberdeen Art Gallery & Museums, explained. 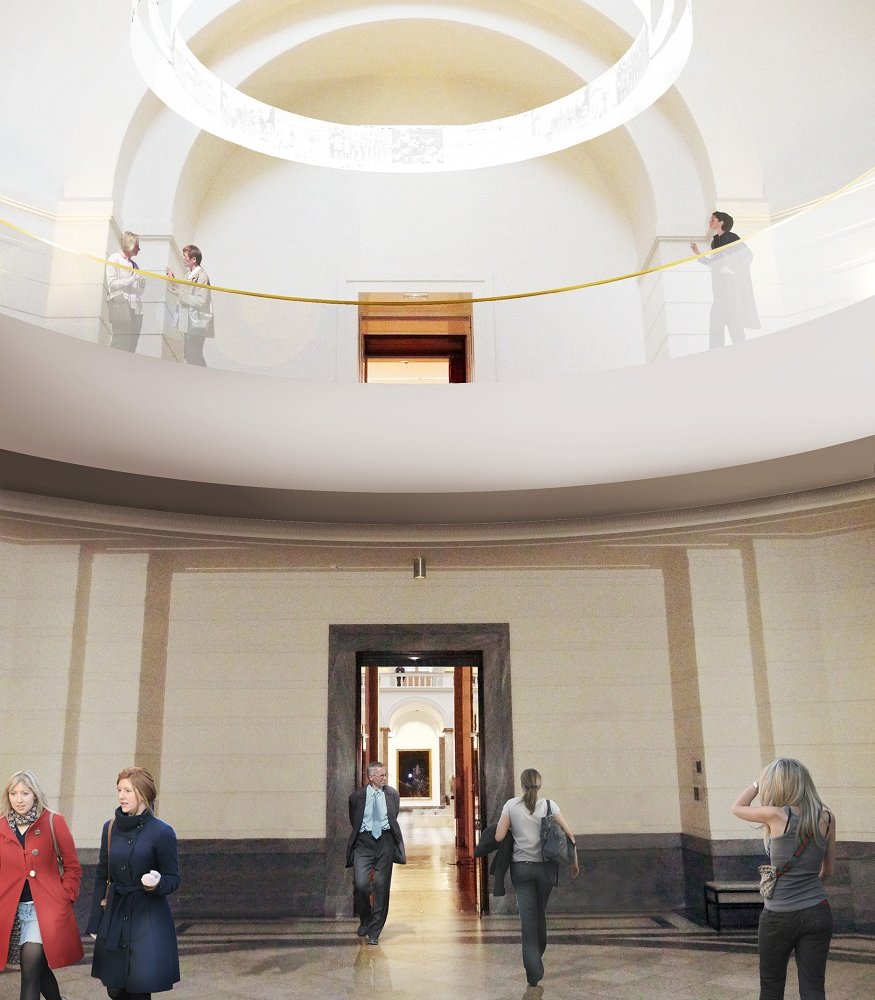 Designs for a War Memorial on the site © Hoskins Architects

Accessibility has been a pillar of the project from the outset, and this is something Rew believes has been delivered. “One of the main targets was to improve accessibility and provide level access throughout the sites. Better wayfinding for all visitors was also very important. We wanted to make it easier for visitors to navigate the buildings, be drawn into new spaces and feel invited through to areas they previously thought were closed off to them.”

Some of the new exhibition spaces have been facilitated by the addition of what Rew describes as the “backpack” added to the roof of the building. While this will house a range of services, it has also freed up other areas of the site for new uses.

This, she notes, has enabled architects to “return gallery spaces that had been only used for temporary exhibitions back to their original function of showing the collections”. The new upstairs space will also make it possible for the gallery to host larger scale exhibitions. The site had previously “never had the space to accommodate” such shows.

Alterations and improvements made throughout the project include:

While increased capacity is a real positive, it’s not always certain that a rise in footfall will follow. One person who knows the difficulties of getting local people engaged with the arts is Councillor Marie Boulton, who works on cultural and planning portfolios for Aberdeen City Council. “The numbers of people visiting the art gallery before was a small percentage [of Aberdonians] and it certainly wasn’t a cross-section of society,” she explained.

The idea of ‘culture’ being elitist alienates people, she notes. Discussing the gallery’s important role in the process of changing this, Boulton referenced the need to improve accessibility “both physically and mentally”.

While some traditionalists were initially opposed to the project, Councillor Boulton believes this resistance has waned. This, she claims, is due to changes to “a lot of the preconceptions of what was there”. An example of this was the building’s marble staircases – considered iconic and priceless by some locals – which turned out to be made of stone and wood with a thin veneer of marble. 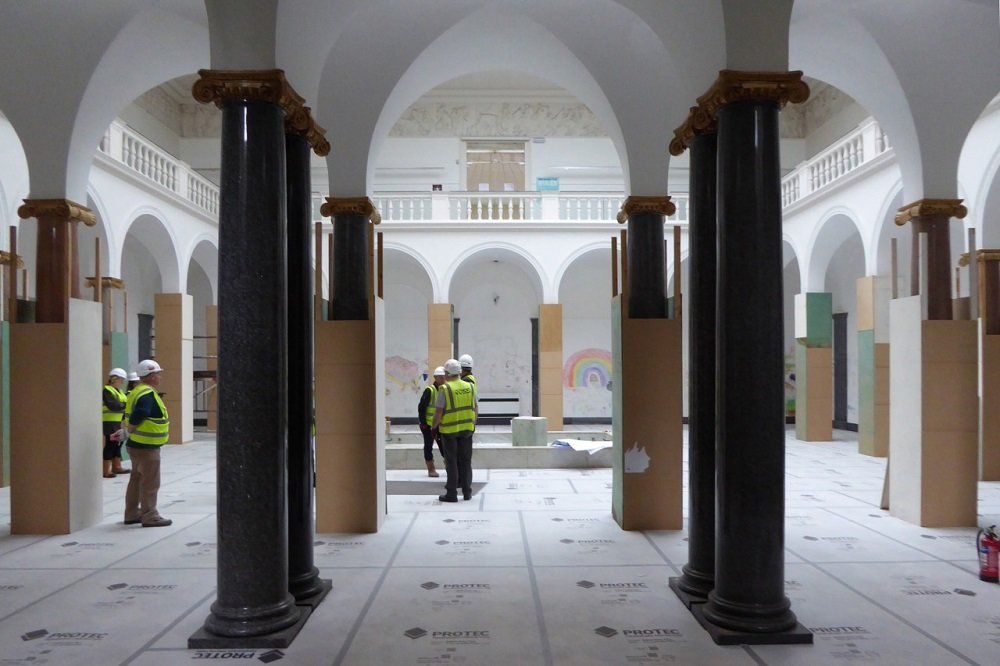 Work on the £34.6m project has taken around four years to complete © Hoskins Architects

This is probably the biggest capital investment in culture that the city will ever see.

Christine Rew has also seen a change in the attitudes of locals as the renovation has progressed. When plans were proposed for the rooftop extension, many Aberdonians were less than impressed.

Now the pre-patinated copper extension has been installed she believes the tide of opinion has turned. The “wave and a rhythm” to the structure pays homage to the sea and the city’s existing architecture, according to Rew. It is also said to reference the Cowdray Hall’s copper dome and lots of other ‘rooftop adornments’ that can be seen throughout the city.

The once polarising roof space is now home to a café which has unlocked “views that weren’t available in past, opening up new aspects of Aberdeen,” she adds.

“This year,” Councillor Boulton explains, “has been massive for the city. It’s been the culmination of lots of investment; both in culture and tourism infrastructure. Previously there wasn’t the investment in our historic buildings and the art gallery. It was being maintained but it wasn’t being developed.

“Our budgets are constantly being slashed, but we’ve recognised that culture is key to driving tourism to the area,” she told us. “This is probably the biggest capital investment in culture that the city will ever see.”

While the fiscal realities of government are not lost on Councilor Boulton, she has seen other cities receive different treatment. “The V&A was virtually built by the Scottish Government for Dundee. We haven’t seen that kind of cultural investment in Aberdeen,” she asserts.

One funding consideration that is now more paramount than ever is the ethics of accepting money from certain backers.

BP is one of the gallery’s most substantial supporters, and this will remain the case in its new era. While Christine Rew conceded that “in terms of the ethical issues, yes, we spent a long time considering it,” the pros outweighed the cons in the eyes of the Aberdeen Art Gallery team.

“BP has had a longstanding partnership with us and many of our visitors will be BP employees; it’s one of the largest employers in the city. That’s an important consideration for us. The firm also supports the annual degree show at Gray’s School of Art. They have a long tradition of supporting the arts and culture in Aberdeen.”

Rew added that while “Aberdeen and many energy companies are looking beyond oil,” she knows there will “always be divided opinions about these things”.

Demonstrating what such support can give to a gallery’s offering, one of the exhibitions coinciding with the reopening is a major retrospective of Martin Parr’s photography. Two series of his work, one focused on Scotland and the other specifically on Aberdeen, will be displayed in the new BP Galleries.

The public response to BP funding being accepted will, like the reaction to the entire renovation project, be evident in time. There is no doubting that Aberdeen Art Gallery is now a much more welcoming and exciting space than it was in 2015 when work began.

All that is left for Christine Rew, Marie Boulton and the city at large is to wait and see whether 250,000 people do indeed pass through the newly-refurbished doors in the coming twelve months.