Share
After a four-year long project, Bletchley Park has now been restored with the help of an £8 million Heritage Lottery Fund grant. The restoration has transformed the derelict wartime Codebreaking Huts into a world-class museum and visitor attraction. The task of interpreting the Bletchley Park story has been undertaken by specialist exhibition designers Event Communications. Briefed to bring Bletchley Park’s stories to life for multiple audiences, the project has involved careful restoration of the Huts and the creation of a new Introductory Exhibition. James Alexander of Event Communications spoke to Advisor.

Until the 1980s, Bletchley Park was Britain’s “best kept secret”. Work at the codebreaking centre in Buckinghamshire during WW2 broke the Germans’ codes and ciphers, including the legendary Enigma, providing the allies with information that is said to have helped shorten the war by two years.

“We were appointed 4 years ago to deliver a master plan in conjunction with the architects. This included looking at the physical fabric of Bletchley (the stately home and the war time buildings) as well as the interpretation of the site for funding applications.” 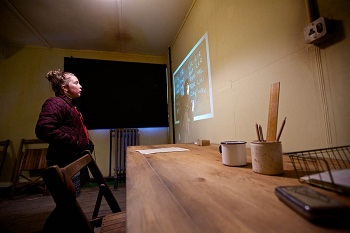 There are three key story areas; those more general stories about Enigma and WW2; secondly, stories about the place itself; and thirdly stories about the people who worked at Bletchley. “ It is this triumvirate”, says Alexander, “which is unique. The role of the people is hugely important. Bletchley Park is layered with wonderful stories and we are sharing what it contains. One of the elderly veterans told me that she had signed up as a teenager, ended up code-breaking, yet had never told her parents or her husband about her work until she started reading about Bletchley Park in the press about ten years ago. Nobody really knows about it – in fact it is only thanks to volunteers and enthusiasts that it has been saved at all.”

Codebraking through WW2 was something of a cottage industry. Once the code had been broken for Enigma, the number of messages coming through the site was vast. At this point code-breakers had to expand into huts. It is Codebreaking Huts 3 and 6, where Enigma messages were decrypted, translated and analysed which have been restored in this, the first phase of the work. “They were in a shocking state,” says Alexander. “Rather than re-making them, we have recreated the environments that would have existed, with a very light touch.” Projected images, sound and set dressing allow visitors to get a sense of the Huts as they would have been at the height of the war – handbags and coats hang on chairs, while paperwork based on the originals litter the desks as if inhabitants had just left the space.

Block C has been transformed into a Visitor Centre with a new exhibition – Secrets Revealed, Introducing Bletchley Park. Objects on public display for the first time include papers on Codebreaking techniques and Bombe blueprints.

“Bletchley needs to appeal to all levels of interest and knowledge. We have catered for those who simply want an overview, as well as those who have some knowledge and want gain a deeper understanding of the impact that the deciphering had.”

With a wealth of stories to tell, one of the biggest challenges has been deciding what to leave out. The fact that this is only the first phase of the restoration means that there will be other opportunities in the future to tell more of Bletchley Park’s hidden history.