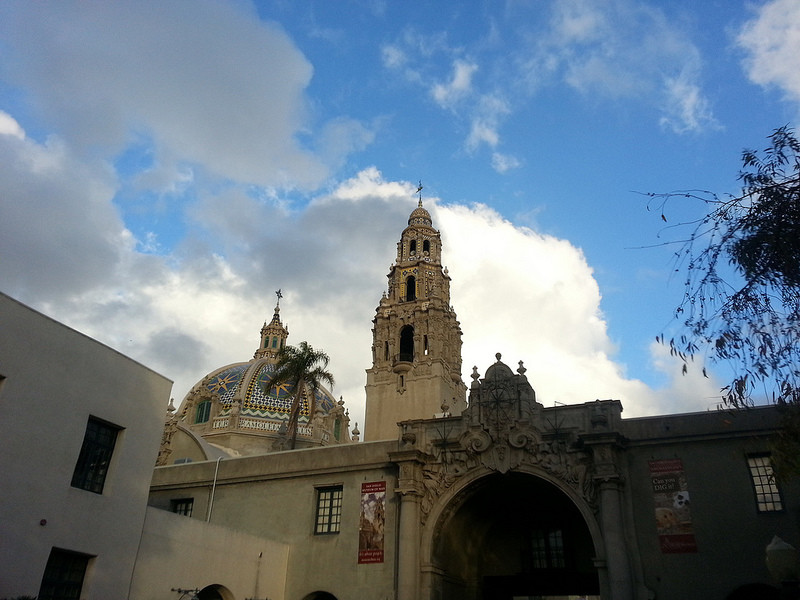 Share
The view from the California Tower at the San Diego Museum of Man is magnificent.

At your feet, is the cultural center of Balboa Park, with its museums, theaters, well-ordered gardens, and the San Diego Zoo.

To the east, are arid mountains set against perfect cornflower blue skies.

To the south, is the arc of the Coronado bridge – high enough to let masted ships pass – then Mexico.

To the southwest, are the modern glass shapes of downtown San Diego.

To the near west, is the stark white Cabrillo Bridge, then further out the dark spur of Point Loma and the twinkling Pacific Ocean.

To the north, are San Diego homes and businesses.

Peaking at 208 feet above the ground on elevated land in the city’s green jewel of a park, the California Tower and its companion the California Dome are the most recognizable architecture in San Diego.

Despite the amazing vistas, few living people have stood inside the Tower and looked out: there has been no public access to that view for more than 75 years.

That could change. Earlier this year, the San Diego City Council funded a study to examine the possibility of reopening the Tower. The staff at San Diego Museum of Man dream of offering Tower tours to the public.

Ideally, the Tower would re-open for the 2015 Centennial Celebration. This year-long festival will celebrate the 100th birthday of Balboa Park, which was created for the 1915 Panama-California Exposition that memorialized the opening of the Panama Canal.

Built as one of three permanent buildings for the exposition (along with two other structures in Balboa Park; the Cabrillo Bridge and the Spreckels Organ Pavilion), the California Tower and Dome are an amalgam of Spanish and Mexican styles. These iconic buildings, are so compelling in their design that they were used as the exterior shot of Charles Foster Kane’s Xanadu mansion in Orson Welle’s movie Citizen Kane.

Originally, the buildings housed the San Diego Museum Association, established in 1915 as a museum of anthropology.

Instead of large cast bells, the tower’s music is an electronic carillon installed in the 1946 and upgraded in the 1990s. A musician sits at a standard musical keyboard and plays the tunes, which are translated to signals for programmed bell-ringing later. The bells are small but highly amplified – real metal is hitting real metal when the tower’s tones are heard.

The dream of re-opening the Tower is not a sure thing. Many problems and concerns need to be addressed including ones of accessibility, building codes, costs, maintenance issues, and more.

To start with, the bare open spaces inside the tower must be renovated. They are spaces which seem to beg to house exhibits, though at the moment, they are mostly concrete-lined shells.

To provide “equivalent facilitation,” the museum has proposed an alternative experience at the accessible second level of the Museum, including a “Tower Cam” that relays live views from the tower to easy-to-view screens down below, perhaps with remote controlled cameras visitors can pan and zoom.

Perhaps the biggest concern is the timetable. If the tower was to open for public access, refashioning it into one of the park’s signature destinations, it would require a large, quick capital campaign, and all of the improvements and renovation would need to be finished before 2015.

The feasibility study should be complete and public in the spring of 2013.

If public access to the Tower is approved, it will be the reinvigoration of a public good, a revitalization of a civic space, and the greatest photo opportunity in all of San Diego.