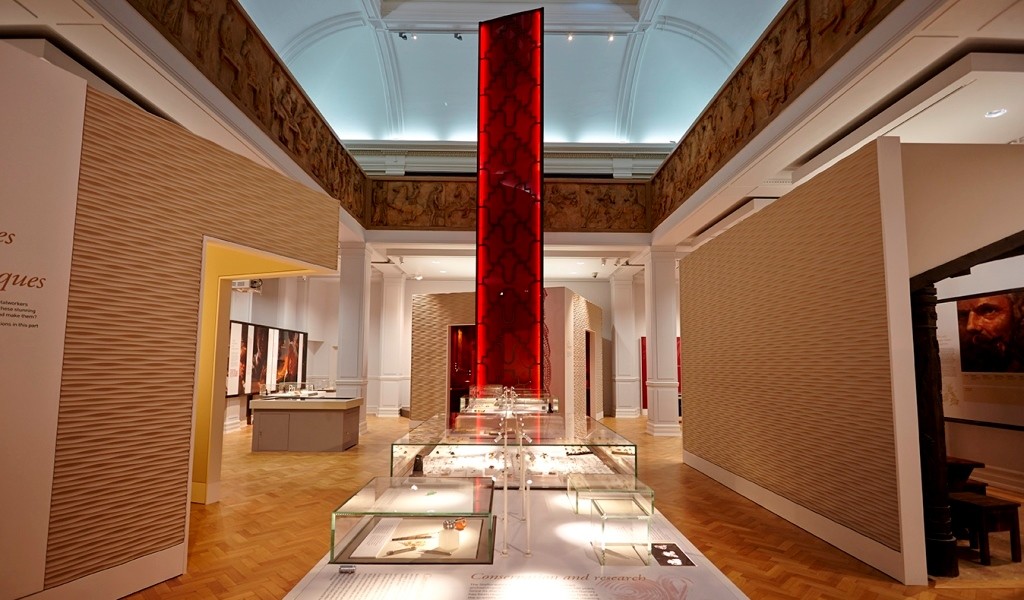 Bringing a collection of 1,400-year-old objects to the public in an exciting and informative exhibition was no easy task, with a myriad of challenges being met and overcome to produce a stunning exhibition. Here former exhibition manager at Birmingham Museum and Art Gallery (BMAG) Andy Horn goes through the design process

My role in the context of the Staffordshire Hoard Gallery was to lead the design development, content and interpretation of the gallery and I recruited Real Studios as the designers. They were new to us as designers but we felt they had the relevant experience of working with similar material such as the Afghan gold exhibition at the British Museum and they also had an interesting balance in their practice between commercial work and museum and heritage work. We also felt that as designers they had a strong balance between design and interpretation and we would work with their two directors throughout the process of design and delivery.

The Staffordshire Hoard Gallery had particular challenges which we needed to consider in developing the design and interpretation. The main challenge was that the objects were very small and you could put the entire hoard into a small bag. Our challenge was how to effectively expand this collection within a large gallery without the objects feeling lost or overshadowed. We would need to manage visitors’ perceptions from seeing it on the internet and assuming that it was larger than it was, as well as managing very different access needs for those who are physically challenged to see the hoard.

The hoard is shared with Stoke-on-Trent City Council and would be on permanent display at the Potteries Museum who were considering developing their own dedicated display/gallery in the future. In addition there were small displays at our Mercian Trail partners – Tamworth Castle and Lichfield Cathedral. We knew that we had to create a gallery were the objects would not be permanent and would be required to rotate and be replaced with other items of hoard in the near future. Our displays would need to allow as much flexibility as possible and have a minimal amount of bespoke mounts. In addition we agreed within our Mercian Trail partners which aspects of Hoard each partner would focus upon. In this context BMAG would focus upon the conservation and research which the organisation had led upon, and the international context; the Potteries Museum would focus upon the Mercian story and its archaeological context in keeping with their collections; Tamworth on the warrior and kingship story and Lichfield on the religious items and the links to St Chad from material that they owned. 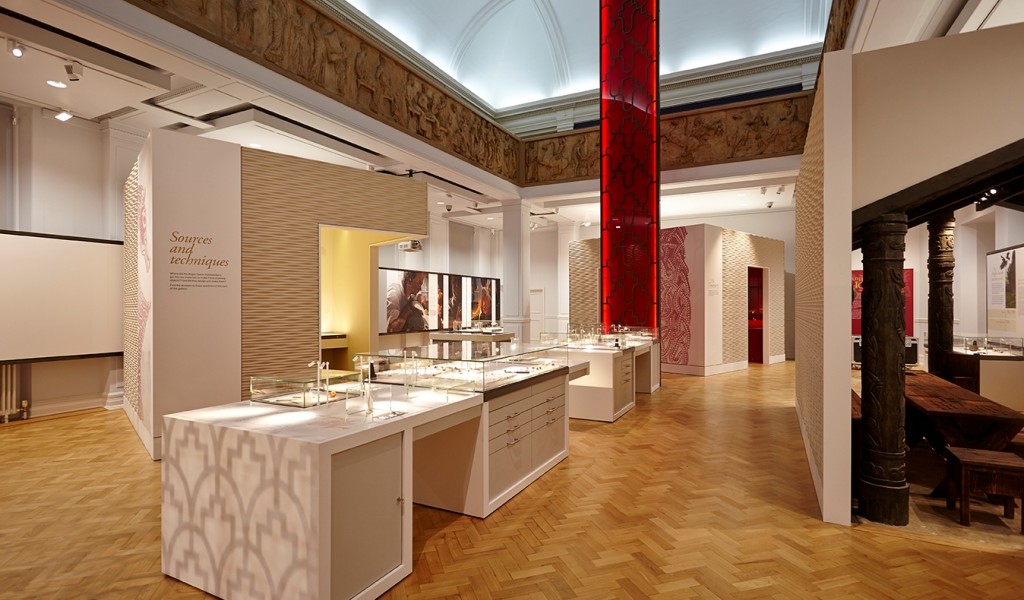 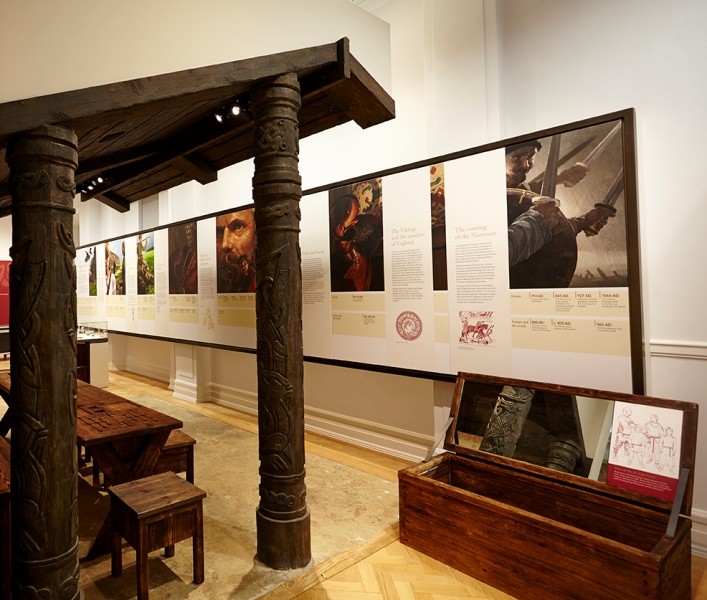 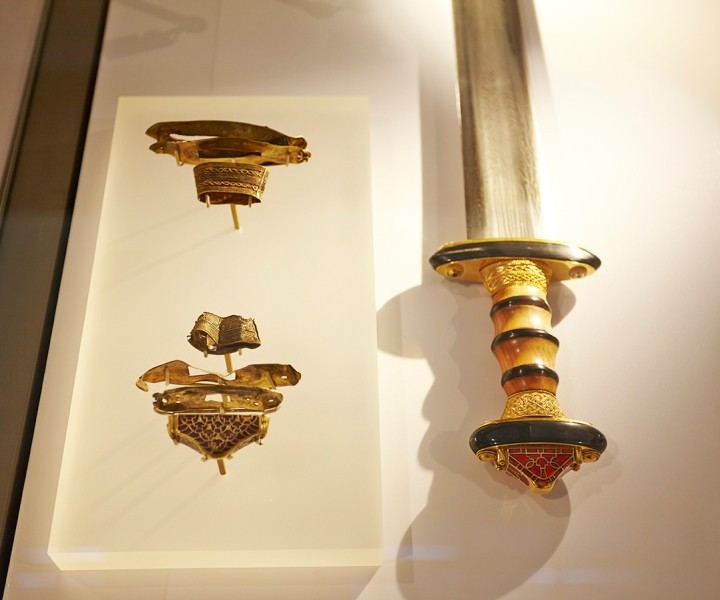 We were displaying a collection that was at the beginning of its research journey and so we realised that our knowledge of it might change in the future. In addition objects were likely to be removed for research and therefore we required flexibility within the displays. One response to this was to commission high quality replicas, particularly for the ‘Treasury’ in which the key, more permanent objects were displayed, as well as using good examples of object type, such as pommel caps, which could re-placed with similar pairs in the future without having to change the interpretation. The central cases were designed so that objects could be easily removed and we could change their displays and interpretation within the cases to allow us to showcase new research and provide a fresh offer for visitors. One of the challenges that we faced, right up until the opening of the gallery, was that new discoveries were being made, particularly through the gathering exercise by Anglo-Saxon specialist Chris Fern who pieced a number of items together to form single objects – this meant that we had to allow flexibility within the case layouts and interpretation to allow for last minute changes.

The hoard had been on continuous display at BMAG since its discovery and we had had over 500,000 visitors. This meant that we had a public that already had some knowledge of the hoard and had already seen it, particularly because it was widely represented on the internet. We were very conscious of the learning opportunities that we would need to create in order to encompass very different levels of knowledge.

The hoard as a collection has a very strong sense of public ownership because of the local story and the hugely successful fundraising campaign which attracted a high level of public contribution. As well as this there are so many mysteries surrounding the origins of the hoard that there is a real sense that everyone has a valid opinion about the major questions that experts continue to debate. This was an opportunity for us to present the story through many different voices and to put the public at the heart of the story, bringing their voices and questions into the introductory section.

We knew the story that we wanted to tell and the challenge was to keep it simple and not have too many messages. Prior to selecting the designers we undertook a number of visits to museums and galleries such as the Ashmolean, Museum of London, and the Holborne Museum to look at styles of presentation and interpretation. However, the gallery was not developed in response to any particular trends, but rather from the framework of objectives that we developed and a process of continuous interrogation. The objects have extraordinary visual and aesthetic qualities and superb craftsmanship and we wanted a design that could allow visitors to appreciate these and draw upon some of the visual language, which was used within the large-scale screens within the gallery and the use of enlarged images of the hoard placed at certain points in the space.

As an organisation, having recently delivered the Birmingham History Galleries and being brought together as a Trust with Thinktank, which has a high level of interactives, we were very conscious of our capacity to manage complex interactives. For the Hoard Gallery we wanted to limit the amount of audio visual and interactive content to avoid future maintenance challenges in both terms of budget and human resources: this was also part of our desire not to overshadow the objects. Many of the simple elements, such as the pattern matching, dressing up and playing an Anglo-Saxon game proved to be the most successful with visitors. The one exception to this low-tech approach was the inclusion of a touch table, developed through a partnership with Birmingham University. At a basic level we could use this to enable visitors to enlarge images of the objects in order to get close to the detail. The touch table also enabled the team to create some fantastic animations of damaged objects to show how they may have originally looked, as well as having the technology to develop future content, again allowing for new research to be presented.

We undertook extensive consultation with visitors through the development of the gallery and this fed into its content and presentation. This consultation included teachers, disabled adults and our community action panel with whom we worked with very closely. Their contribution was evaluated once the gallery was opened and the findings confirmed that all these groups felt that they had been listened to and their advice and contribution was taken on board.