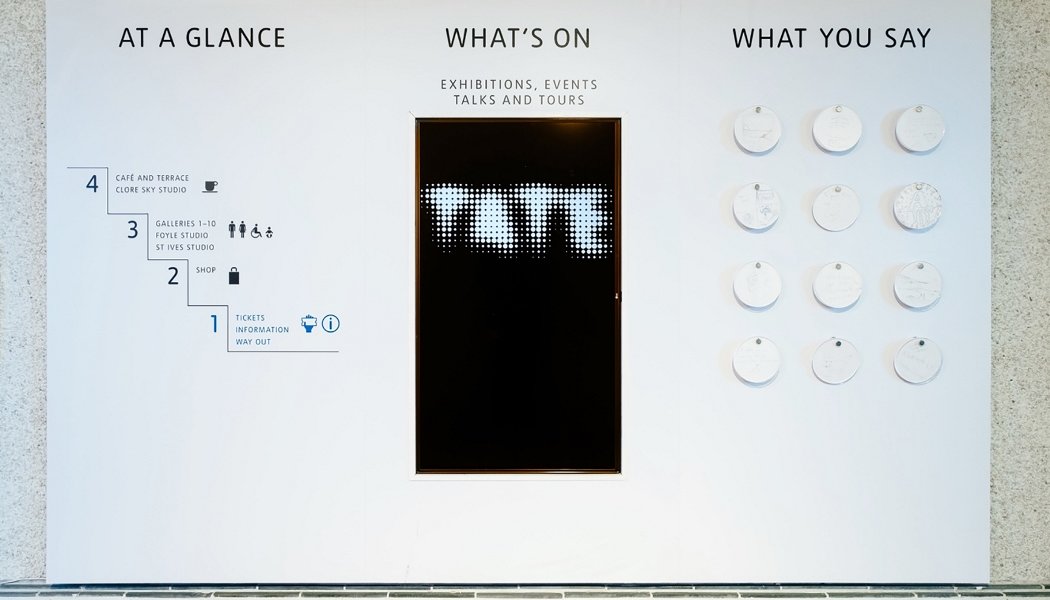 As part of the Tate St Ives Project to completely refurbish the original building and create a substantial extension, design consultancy CCD has created a new wayfinding system. CCD began the project in autumn 2016 while the gallery was still closed to the public and continued its work as the gallery part-opened in spring and ready for the full opening of the new extension in October

The new wayfinding system at Tate St Ives guides visitors into and through the restructured original building, with its improved visitor facilities and new spaces for events and exhibitions, and around the more than 600 sq metres of gallery space.

Undertaken in a number of stages, the CCD wayfinding system began with an initial research programme based on psychological principles, which questioned staff and visitors, and utilised workshops to evaluate the previous wayfinding challenges and identify how to meet the needs of the new structure. From this a temporary wayfinding system was created as the basis for further observational testing and refining so that the full system could be rolled out at the same time as the launch of the new extension. 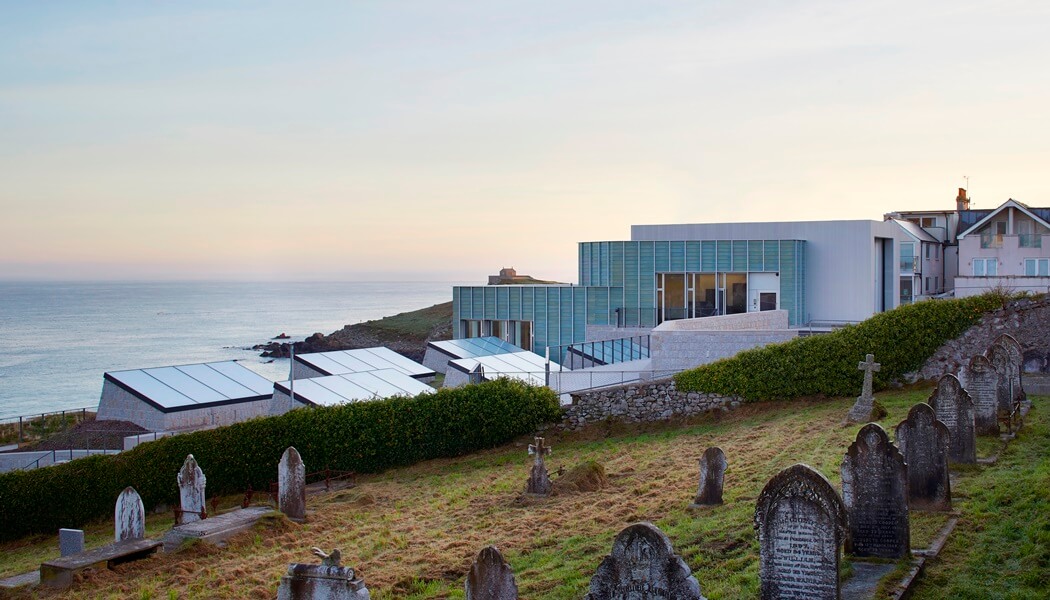 The new system has been designed to be discreet and create a sense of ‘wandering’, encouraging people to visit all of the gallery spaces. Galleries have been renumbered to make the layout more intuitive for visitors to understand their ‘journey’.  The signage evolved from the idea of a 3D circle and reflects the architecture of the gallery, as well as its origins, on the site of a gas works, and a gasometer. Signs are colour-matched to each gallery.

“I think wayfinding is key to the experience because you have both functional needs, people arrive they might need the toilet or need to eat and get a drink and then there’s the emotional side and I think we are finding we can do both and link the two,” says Chris Girling, Head of Wayfinding at CCD, “If the information is given when people need it then they don’t even think about it but if it’s not, then they will complain, get confused and they will have to go out of their way to find someone to ask. If it’s a work of art, that’s understandable but if it’s the toilets then it means the wayfinding isn’t working properly.” 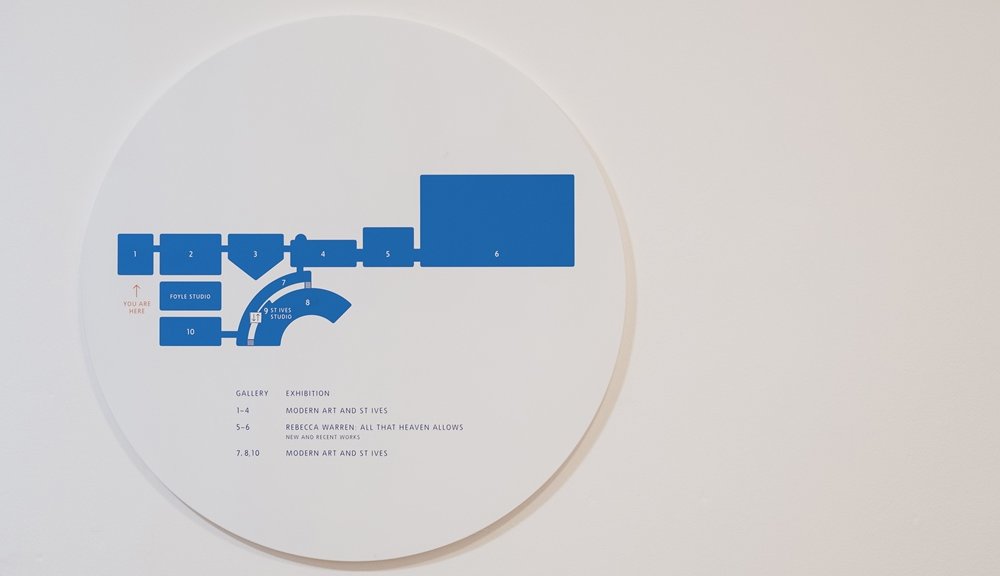 Girling says it’s okay for a visitor to get lost in the gallery within the art because then there is this sense of wandering but not lost because they need something they can’t find. He says this will affect the overall experience and might be the only thing a visitor talks about afterwards.

CCD, which says its design is driven by human behaviour, has respected Tate guidelines to ensure there is a common brand experience at all Tate galleries. However, specific to the Tate St Ives was how the galleries were numbered because the redevelopment added new galleries and so the designers created a trail of ten galleries, which it says is logical for visitors and they would know if they had missed one, which wasn’t the case previously. Girling says the new wayfinding system is best described as ‘simplicity’ for the visitor. 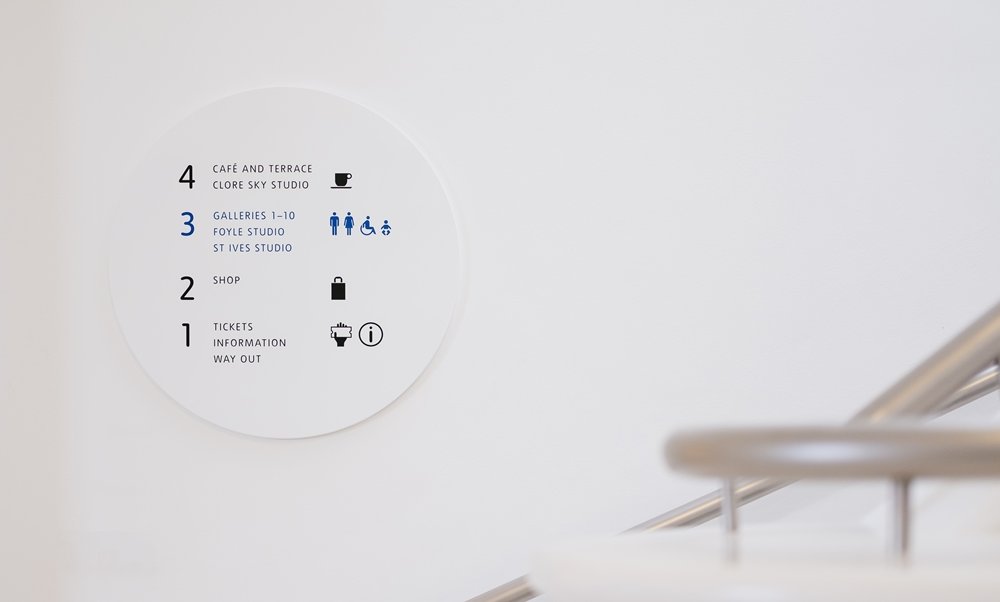 Key information is given in the wayfinding signs such as this one. For example by including the word tickets, visitors are reminded that they neeed to buy a ticket, something that wasn't apparent before the redevelopment

CCD began on the project last autumn and held workshops with all the stakeholders. They looked at the information they have been compiling over the past few years including some of the problems that visitors had shared with them. They tried to find the most common questions staff were asked to capture what they already know and that helped them get to a starting point.

“While the gallery was closed we organised stakeholder workshops and we tried to understand the space as it was,” says Darren Clarke, senior wayfinding designer at CCD. “We then we came up with pilots and with a test run and then when the gallery reopened we did the onsite observations to see if the system was working. It’s not very often you get to do that.”

Once the gallery was opened the team conducted on site research and observations such as visitor behaviour, conducted questionnaires and also used feedback cards in the café on the top floor about how visitors navigated. Clarke says they had to reinforce some information at certain points so visitors could be clear on where the entrance to the galleries were, for example. 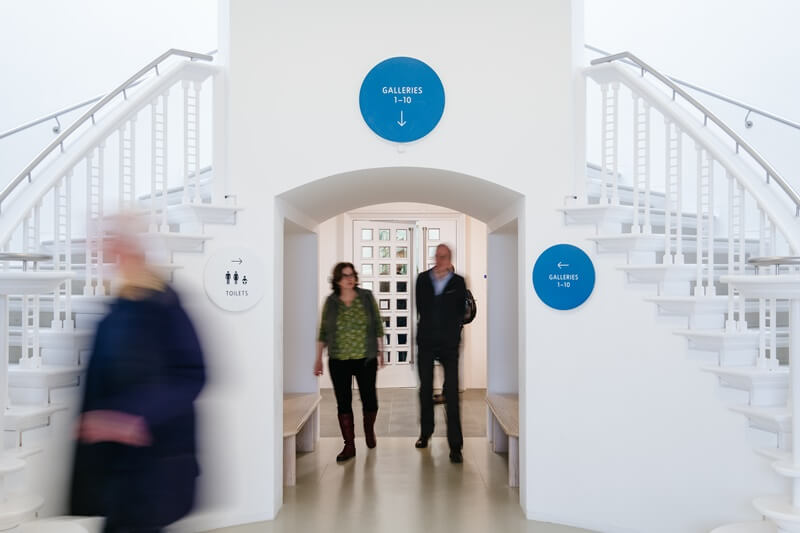 The redevelopment added a number of new galleries, which are cleary labelled throughout the space

“The problems visitors had before the refurbishment before was not being able to find the cloakroom or the lift and we definitely improved the system by having the information in the right places,” he says. “It’s very important to give people a snapshot when they enter a space and that’s what we did by creating a really simple line map, which shows how many floors and what’s on each floor.”

CCD has not included any complicated shades or colours in its design with the aim that visitors will immediately know where things are because of its clarity, which Clarke says was lacking before as visitors didn’t know if they had to pay to enter or if the café was free.

One innovation CCD included in its wayfinding system was an interactive wall that would act as a functional feature offering visitors the opportunity to give their feedback in a very participatory way. This was achieved by the creation of a very simple wall with round pieces of paper, which match the wayfinding system and the brand, and pencils for visitors to draw or write how they feel after seeing the space.

CCD wanted a way of measuring people’s experiences in a positive way, that was different to handing out questionnaires, and this seemed like a playful and friendly way to do this.  “The interactive wall is upstairs but we also wanted to show people coming in to the gallery what others have enjoyed or been impressed by,” says Lilli Larratea, senior wayfinding designer. “So the best comments are shown downstairs but upstairs there’s a sentence you have to complete: ‘For me Tate St Ives is …’ And mostly it’s people saying positive things. And if you look at the Tate building it is very minimalist and can seem a bit cold so it needed that friendly touch.” 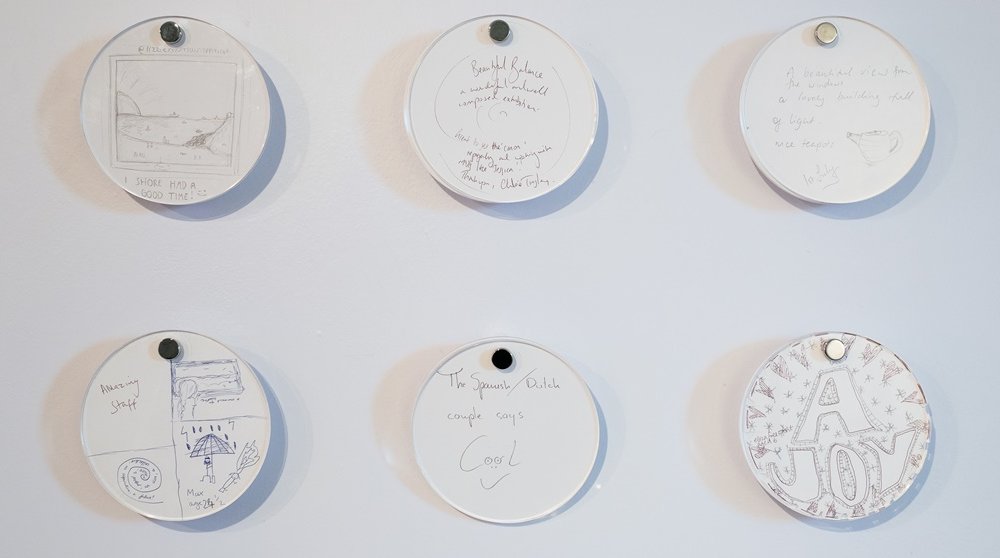 Larratea says from CCD’s experience working with museums and galleries, it knows that some people want to be told what is there in the gallery and others prefer a bit of freedom so they always try to implement a mixture of both. With the wayfinding system at Tate St Ives, CCD has created a system that is subtle enough to inform visitors from the beginning about the layout of the gallery so they can plan their visit and also detailed enough throughout the space so that those who prefer to wander can easily see where they are if they need to.