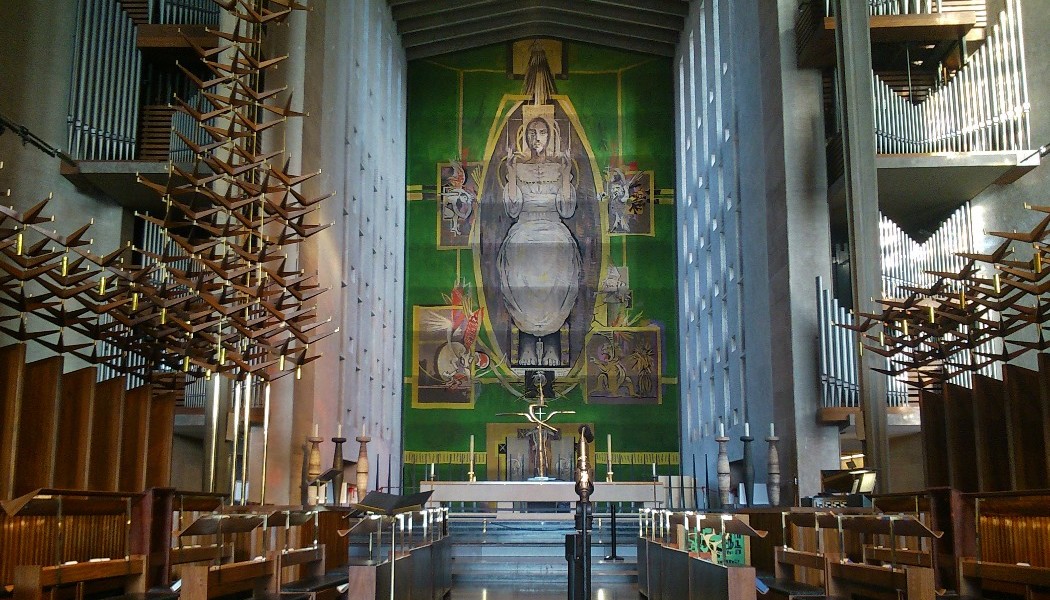 Christ in Glory: Conserving one of the world’s largest tapestries at Coventry Cathedral

In 2015 two teams of conservators joined forces to clean and assess Graham Sutherland’s Christ in Glory tapestry at Coventry Cathedral and what followed, and is ongoing, was its most complex and detailed examination in more than half a century

The “Christ in Glory in the Tetramorph” tapestry hangs against the back wall of the Lady Chapel at the north end of the cathedral church of St Michael, Coventry and commands the focus of attention for anyone entering the cathedral.

The cathedral itself has its own important story, as it was built as a replacement to the adjoining ruined cathedral of St Michael that was heavily bombed during the Second World War. It is now both a busy church and tourism attraction alongside the ruined cathedral.

The inclusion of a tapestry in the new cathedral was an integral part of the design by architect Basil Spence and Graham Sutherland was commissioned to design the tapestry in 1951. Sutherland’s design depicts the risen Christ surrounded by the symbols of the four Evangelists as described in the Book of Revelation and is believed to be the largest continuously woven tapestry in the world.

The tapestry was woven in France at the workshop of Pinton Frères of Felletin near Aubusson, and was installed in the Cathedral in March 1962 before the consecration ceremony in May. It measures 23m high by 12m wide and is made of undyed cotton warps and dyed wool wefts with a weave count of 12 warps per inch.

It is estimated to have more than 900 colours and was created by a team of 12 weavers working for two years. It was woven in one piece with the slits between the different areas of colour stitched closed at 5mm intervals.

The tapestry had been surface cleaned on several occasions, the last being in 2001, and the Cathedral wanted to look at this in the larger context and commissioned a reassessment by Textile Conservation Ltd in 2012.

On an aesthetic level, the soiling created horizontal bands and the optical illusion that it hangs in bulges; in fact this is the pattern of soiling and the tapestry hang flat 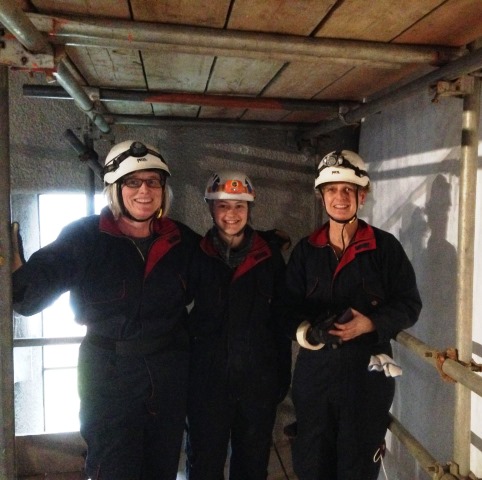 Berkouwer’s brief was to carry out surface cleaning of the tapestry in situ and then to carry out trials for further cleaning and improvements to the hanging mechanism and thirdly, to plan and set up the investigations and monitoring of the environmental conditions and soil deposition. The findings of this research are currently being used to prepare a Conservation Plan, which will be finalised later this year.

The Cathedral then commissioned the scaffolding which was needed to reach this enormous tapestry up to its full height of 23m, and an extensive health and safety plan was carried out in advance.

Helmets, body harnesses and fall-safe mechanisms were supplied for each of the four conservators. Work began in February 2015 and took four weeks to complete working with four conservators. In this time the teams carried out the surface cleaning, as well as all the trials and installation of monitoring equipment.

“From the start, part of the brief was to think ahead and to advise on the long term ongoing care, and to think ahead about the feasibility of future wet cleaning,” says Berkouwer.

The conservators found surface dust to the front and back of the tapestry as well as ingrained soiling in bands around the horizontal shelves. There were minimal distortions in the tapestry due to weave variations and hanging mechanism issues with the side hanging strips being degraded.

The tapestry is arched at the top and nailed onto heavy wooden beams. At each level of “shelves” below there is a strong, horizontal cotton strap stitched to the back of the tapestry by which it is fixed to each level. Finally, along the side edges is a continuous length of black fabric with which the tapestry is stretched sideways and stapled to vertical beams. The result, says Berkouwer, is that the tapestry hangs extremely well and evenly to this day.

The tapestry has a 0.7m deep double turned weighted hem along with lower edge which hangs approximately 0.4m off the floor. The tapestry is unlined. It is fixed onto a structure of “shelves” which act as walkways behind the tapestry. 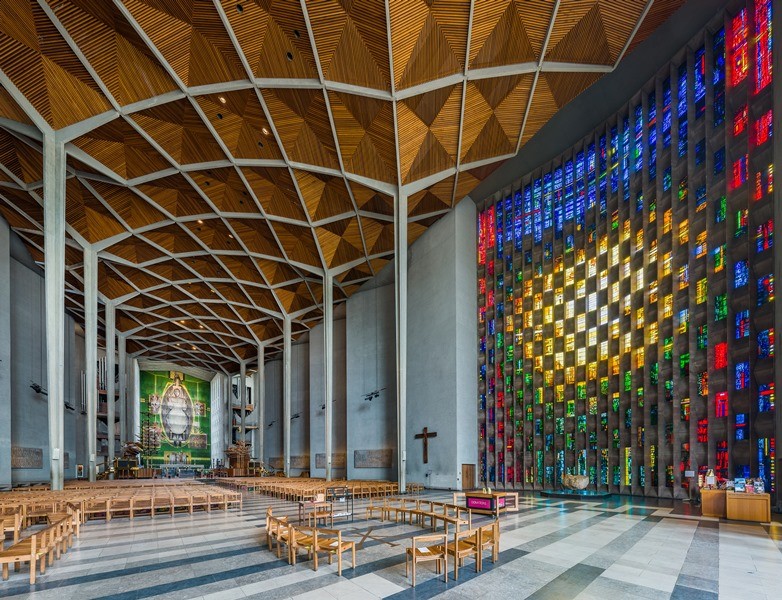 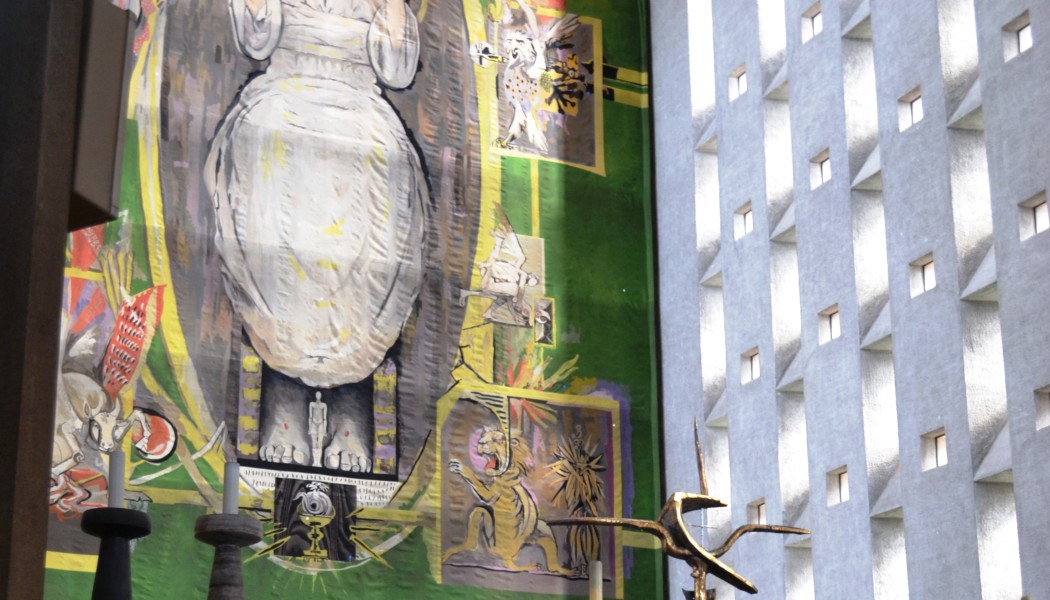 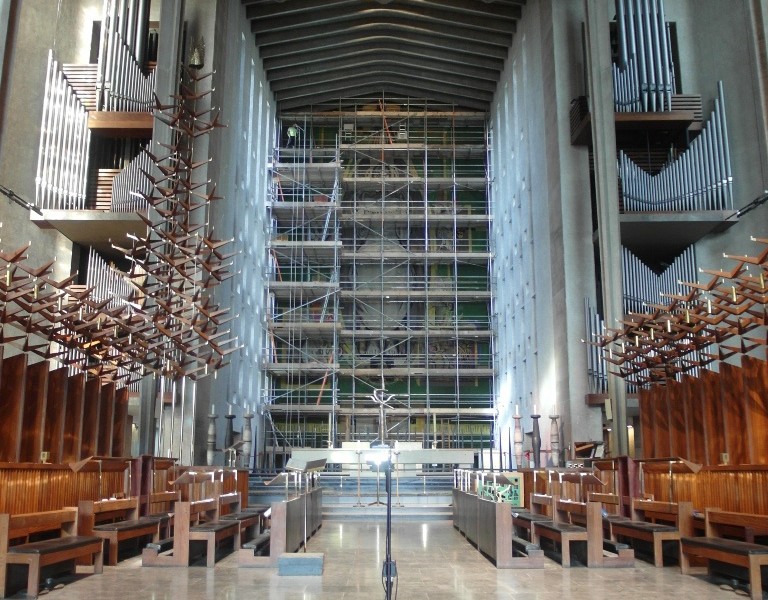 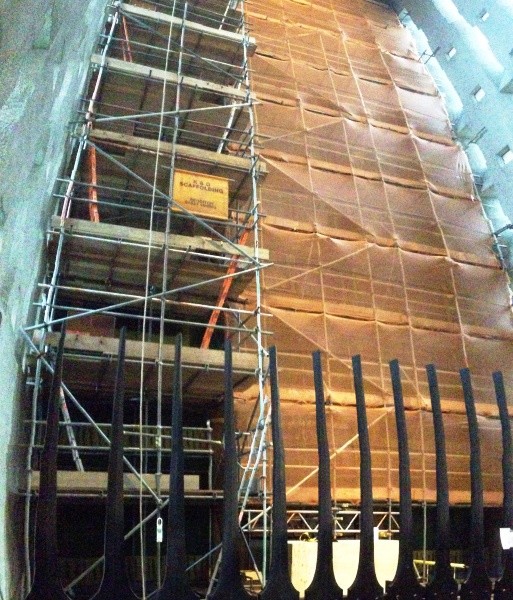 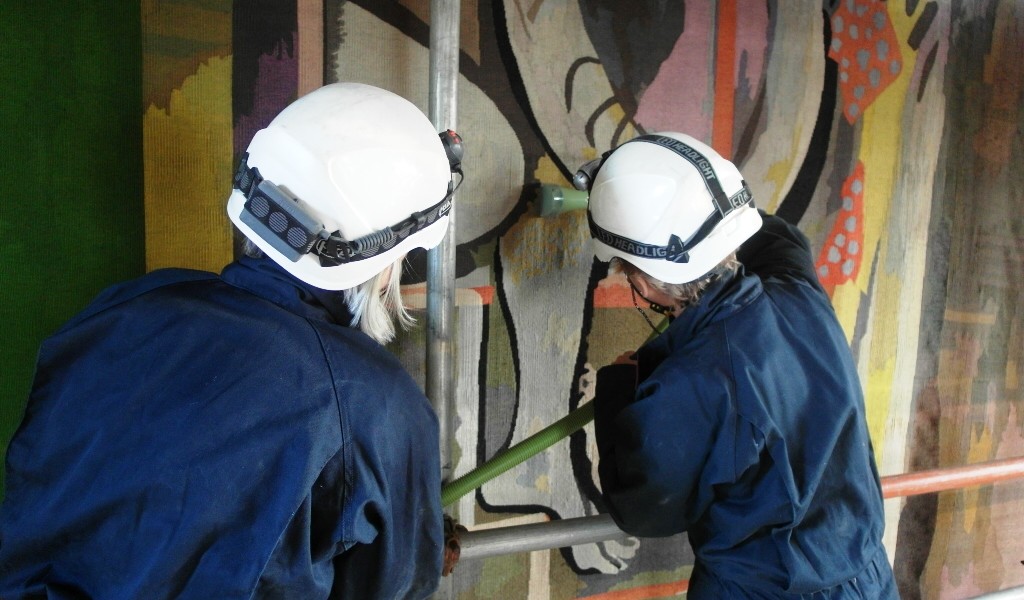 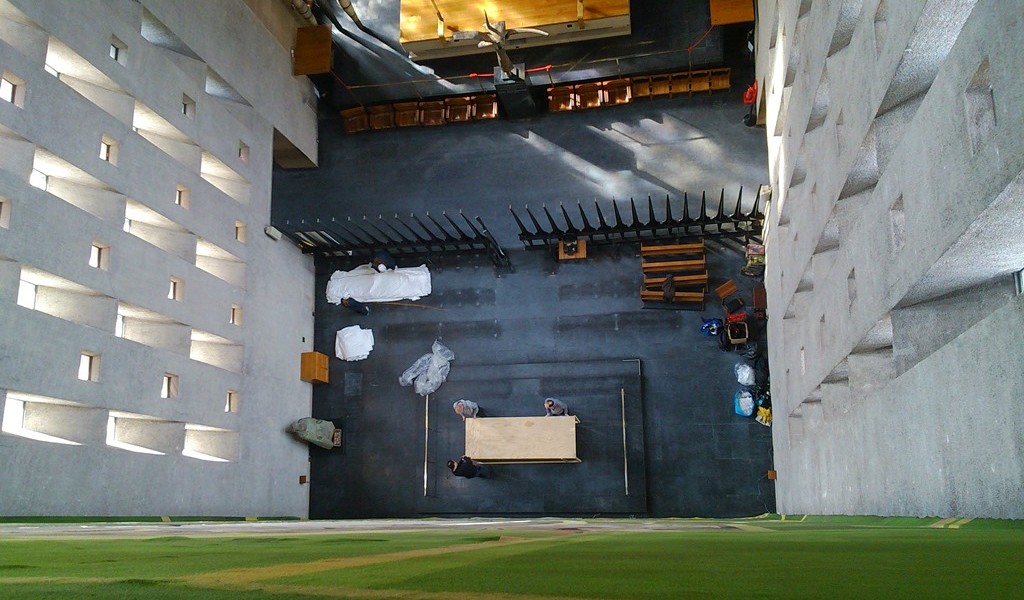 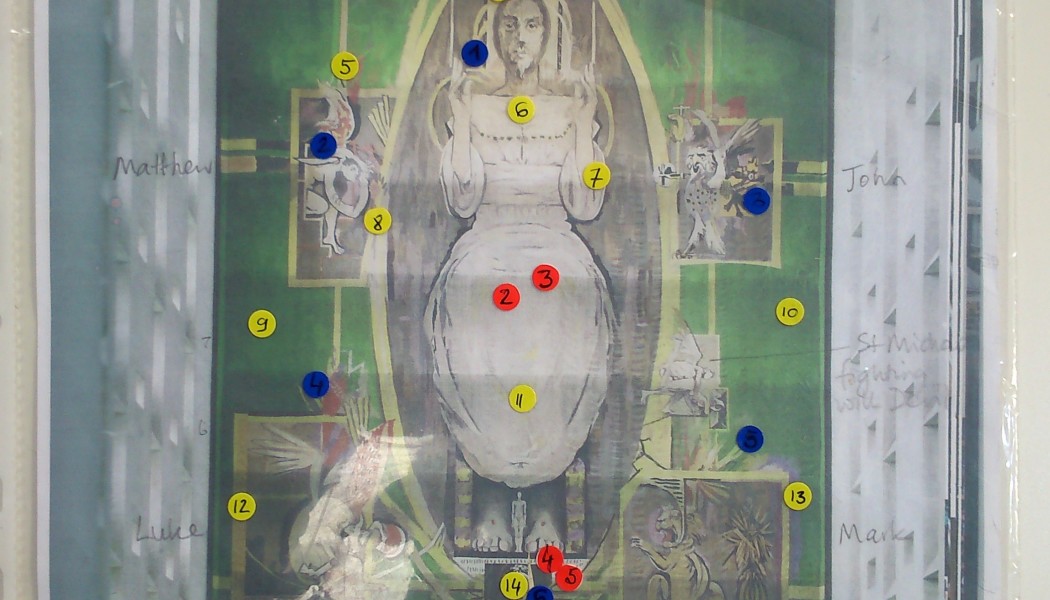 “Access to the reverse of the tapestry is by a very narrow vertical ladder which is part of the hanging mechanism of the tapestry, and this needed to be updated with safety features,” says Berkouwer.

The condition assessments and proposals for the cleaning treatment of the tapestry carried out by the two teams included a survey of the causes and effects of the large amounts of surface and embedded sooty particulate soiling that was present on both faces of the tapestry. The soiling had collected in wide bands across the tapestry, the location of which matched the position of the walkways on the scaffold.

“On an aesthetic level, the soiling created horizontal bands and the optical illusion that it hangs in bulges; in fact this is the pattern of soiling and the tapestry hang flat,” says Berkouwer. “Fluctuations in air moisture and temperature are likely to have contributed to the consolidation of the soiling, making it now impossible to fully remove.”

“On the face side we had a scaffold with 12 levels which meant we could reach right to the top safely,” she says. “However, the scaffolding and safety netting blocked some of the light needed for work.” For the reverse they needed to climb up a narrow vertical ladder with limited access to the top level in particular, made even more difficult by wearing of the H&S equipment which included a fairly heavy harness. “We also needed to attach ourselves at every level at the back which in itself restricted movement.”

Added to this were the practical issues concerning lighting, access for photography, moving equipment around, electricity supply at various levels, communication and working at heights.

The surface cleaning carried out could only lift off loose surface dust and the increasing amount of ingrained soiling would need to be removed in other ways and that was the subject of the trials. In depth cleaning and other measures are part of future planning. The assessment also revealed that the hanging mechanism of the side edges is beginning to fail and will need to be corrected imminently.

“The findings of this research will be used in the preparation of a Conservation Plan and the feasibility study aimed at identifying what conservation treatments (e.g. removal from display, immersion cleaning, stitching, full lining, and renewal of hanging mechanism) will be necessary in the future and if/how these can be applied,” she says. “The aim is to install a lining to prevent soil build up on the reverse of the tapestry.”

In collaboration with Tobit Curteis Associates LLP and the cathedral architect research is being undertaken into the relationship between the display structure, the environmental conditions and the patterns of soiling and degradation.

A better understanding of airflow within the cathedral envelope and of the transportation methods for dirt particles is essential if rates of deposition, and thus frequency of expensive and potentially damaging cleaning, are to be reduced. The impact on dirt accumulation of alternative hanging mechanisms and the addition of a lining is also being investigated.

Presentations are being made at IAQ2016 – Indoor Air Quality: Heritage Research to Conservation Practice on 3-4 March and at the Icon Conference 2016 entitled: Turn and Face the Change: Conservation in the 21st Century from 15-17 June.

Under the bonnet facts

Work was carried out to devise and install the monitoring equipment in the form of dust traps, blue wool cards for light fastness measurements and temperature sensors

These trials hope to avoid the need for full immersion wet cleaning, with its many risks on an object of this size

Results were promising, the soiling is readily removed and initial colour bleeding tests indicate that the colours are safe

The practicalities of wet cleaning has been the subject of much discussion in working out a method that will cope with the weight and size of this object particularly in a wet state, as well as all the normal considerations of problems with shrinkage and distortion