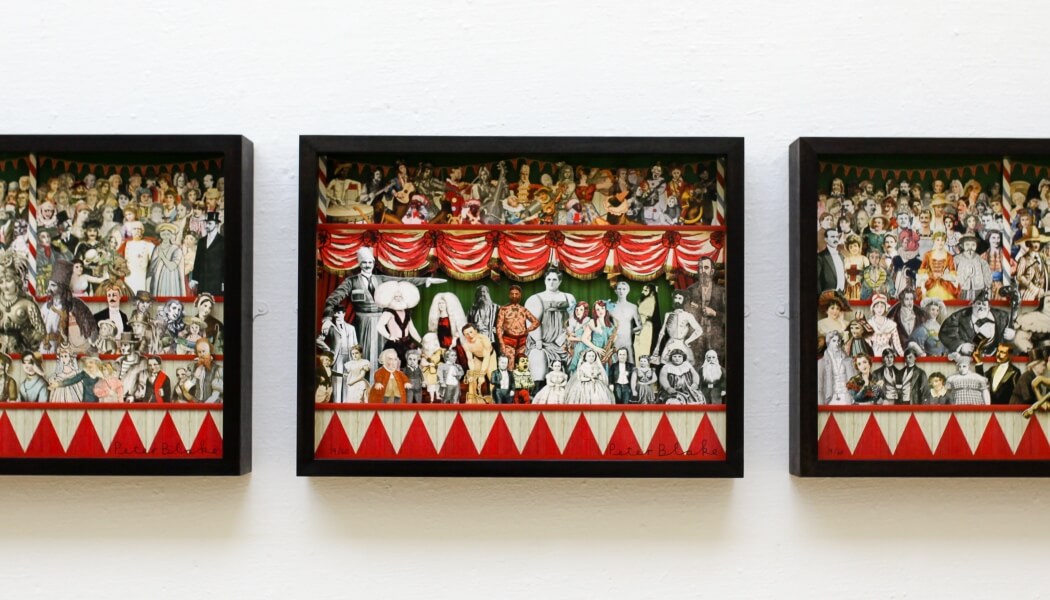 Circus250 – Museums and galleries celebrate 250 years of the modern circus

This month marks 250 years since the first modern circus was established in England and across the UK and Ireland museums, galleries, theatres and circuses are recognising the occasion with exhibitions, events and special performances

This year hundreds of circus-related exhibitions and events are taking place in towns and cities throughout the UK as part of Circus250, the umbrella organisation co-ordinating the year-long celebrations. Circus250, has been set-up by Ringmaster, Dea Birkett, founder and former creative director of Kids in Museums, to bring together the circus community and the custodians of heritage in recognising the illustrious history of the circus.

The circus is different from every other art form in that you feel every emotion when you go and see it, you laugh, you cry, you gasp, you’re afraid, you put your hands over your eyes. It’s also completely accessible and that’s why it offers so many opportunities to heritage. It stirs all our five senses as you smell it and feel it. 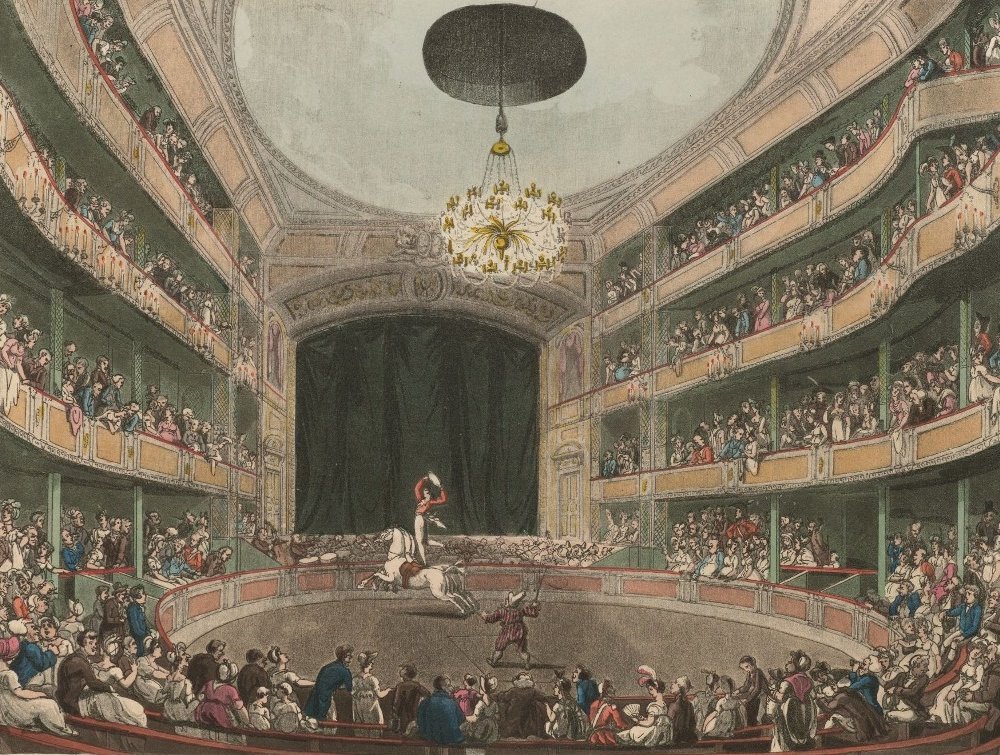 It all began in 1768 when Philip Astley, a six-foot former cavalryman (nicknamed ‘the devil in disguise’ by his schoolboy riding instructor for his daring and skill), began performing on horseback to audiences in a ring in Waterloo with his wife Patty. From this point on Astley began to incorporate more acts and came up with a formula for the perfect circus ring that would be mimicked by competitors and become a forerunner to the big tops we see today.

As part of the Circus250 celebrations six cities, each with very strong circus heritage and also contemporary circus practice, will carry the title of City of Circus. Among them is Newcastle-under-Lyme, the hometown of Astley, where the New Vic Theatre, working with a number of partners including the V&A, NoFit State Circus and Circolombia, will host a a variety of circus events – supported through the Arts Council’s Ambition for Excellence fund – including Astley’s Astounding Adventures billed as its most ambitious show ever. 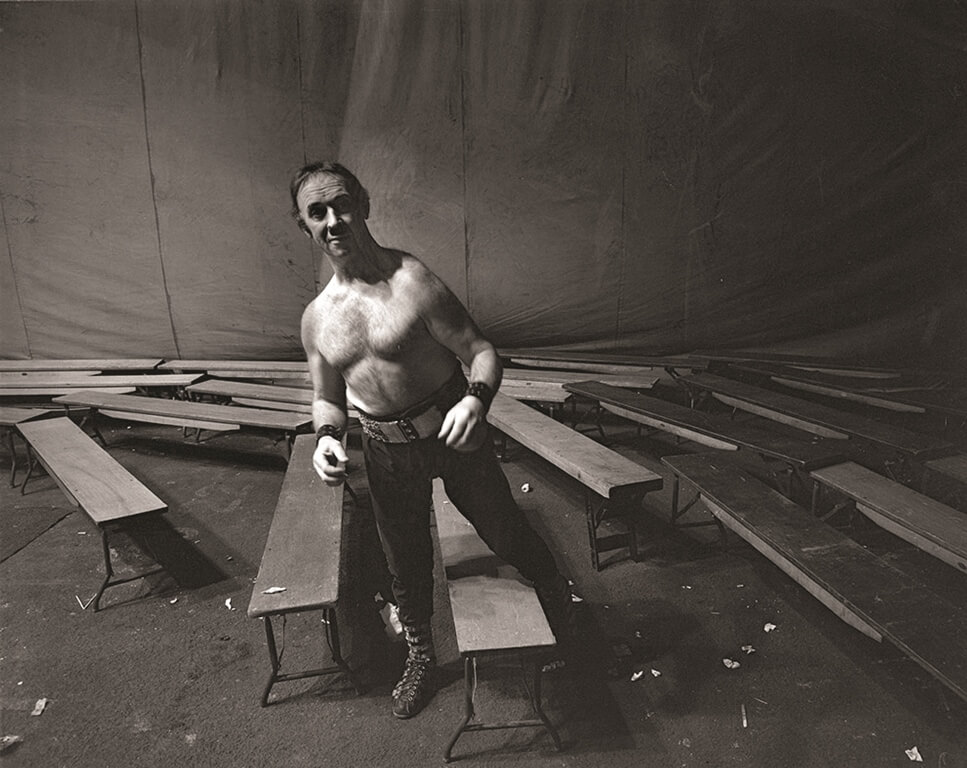 “Museums and theatres are ceasing this opportunity to bring these materials out and celebrate the 250th anniversary. It’s a great spur for people to follow heritage on their doorstep,” says Birkett. “The circus is different from every other art form in that you feel every emotion when you go and see it, you laugh, you cry, you gasp, you’re afraid, you put your hands over your eyes. It’s also completely accessible and that’s why it offers so many opportunities to heritage. It stirs all our five senses as you smell it and feel it.”

Preparations for Circus250 began about 18 months ago when Birkett, who started out as a circus artist before becoming a writer and cultural leader, wanted to use her experience and talent – epitomised by the ongoing success of Kids in Museums – to create a memorable anniversary. She met with museum and gallery directors across the country as well as circus performers to formulate a plan.

“I come from the traditional circus community and 2018 is a huge date,” she says. “1768 is widely regarded as the date of the first ever modern circus. But I realised that it would be difficult for the traditional community, with their tented touring shows, to organise a nationwide campaign and profile for 2018. And also when I went to the contemporary circus community, really none of them had heard about 1768 or the 250th anniversary but once they did know about this fabulous shared heritage they were keen to get involved.”

In Bristol, which is home to five circus organisations and once had six permanent circuses, the Royal West of England Academy will be hosting a major exhibition Sawdust and Sequins: The Art of the Circus. 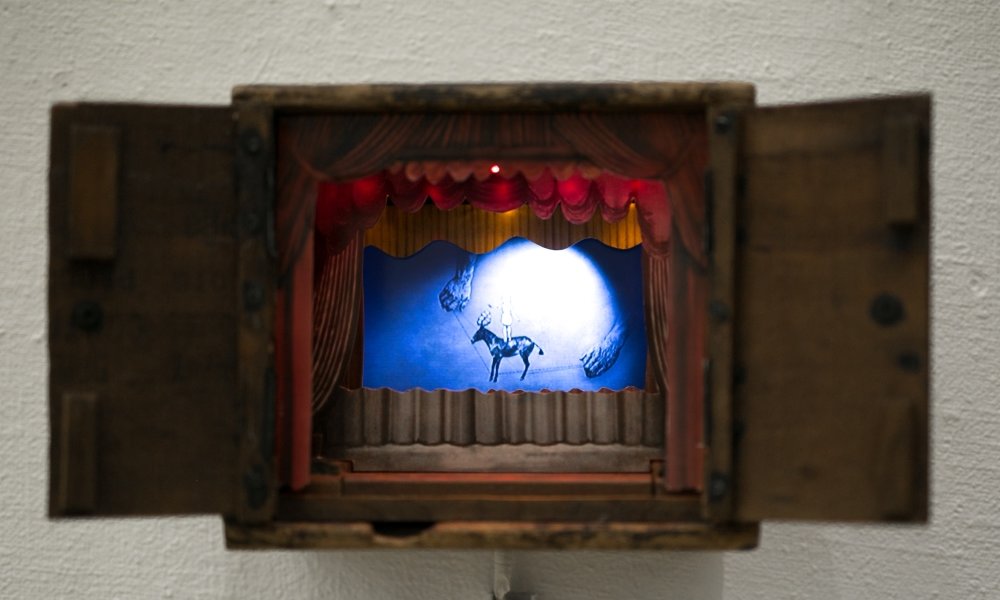 Sawdust and Sequins will explore historical depictions of familiar circus scenes to contemporary works exploring the glamour and grit and the complex, compelling nature of circus and why it still captures our imaginations. It will also feature works by contemporary artists including Sir Peter Blake RWA (Hon), who has designed the Circus250 logos, and a new commissions by artists Sadie Tierney, Katharine Jones and Abigail Lane. As well as this, an exhibition of Peter Lavery’s circus photography will accompany the exhibition. His intimate, tell-all portraits document the unseen reality of life in the circus from the 1970s to the present day. 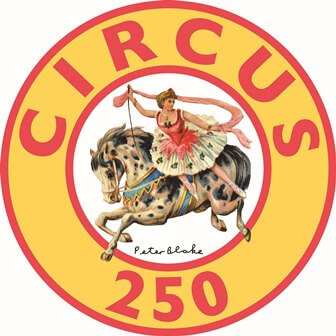 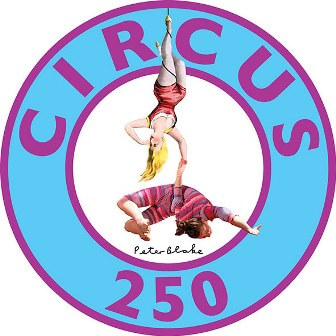 “The RWA is very proud to be hosting the only major visual art exhibition in the UK (another is being held at the National Gallery of Ireland) celebrating this landmark anniversary,” says RWA’s Director, Alison Bevan. “Bristol has a remarkable circus heritage and continues to be one of the most active centres for circus companies and the development and practice of circus skills. For the RWA, celebrating this amazing part of Bristol’s creative culture is a continuation of its role as a focal point for the region’s visual arts, bringing great works of art to the city and showing them alongside homegrown talent (including our own Academicians) and using our exhibitions to spark creativity and nurture talent for everyone.”

A selection of Lavery’s photographs will also be displayed at The Harley Gallery in Nottinghamshire where director, Lisa Gee, was asked to Chair the Circus 250 group back in 2016, after she met Birkett at the opening of the gallery’s Peter Blake Grand Tour exhibition. 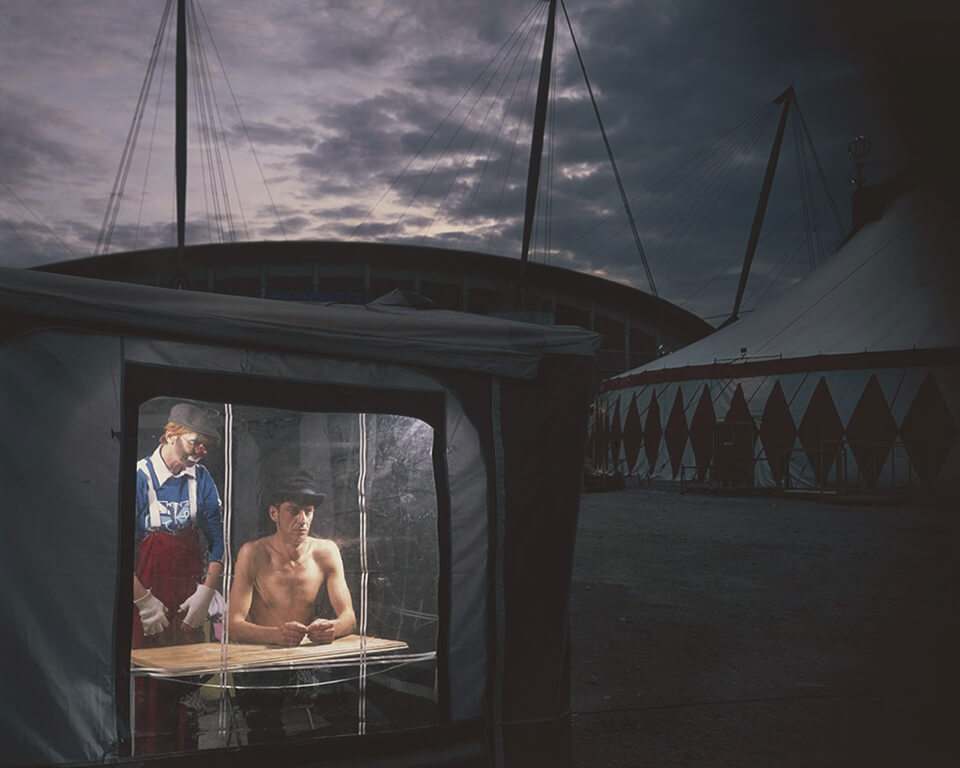 Clowns Viktoria Arabei with Zurab Skhirtladze in the car park of the City of Manchester Stadium. Copyright Peter Lavery. Courtesy of The Harley Gallery

“I was interested in finding a suitable exhibition for The Harley Gallery,” she says. “I thought that circus was one of those universal cultural experiences that people recall, either through films or stories or actual circus performances. I researched artists and designers who work with circus imagery but nothing caught my attention. I considered different ways of presenting circus performances using film and video but that didn’t work either. Then Dea introduced me to Peter’s work and I knew immediately that it was an exhibition for The Harley Gallery.”

Gee says the exhibition charts Peter Lavery’s 50-year love affair with circus and the performers and the photos are intensely moving, with the glamour of the Big Top seen alongside the mud and grime of the fields and the caravans and lorries that they work in. “None of Peter’s photographs are sentimental and all of them describe the people behind the leotards and sequins. The fact that every photograph comes with a story about the subject and what they are doing now, adds to the depth of the experience. What it shows is the grit and determination of circus performers who move from town to town, camping in often awful conditions to create these spell binding acts of physical bravery and heart-stopping illusion.” 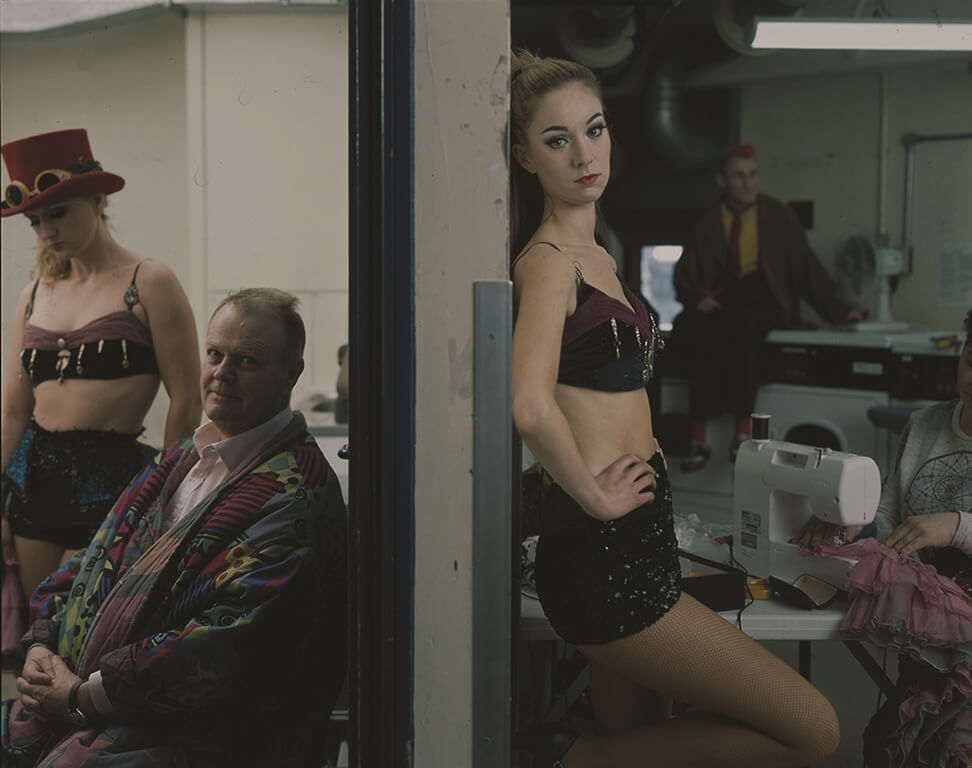 Birkett says the circus is deeply embedded in all aspects of our culture and what makes the 250th anniversary so special is that it has brought traditional and contemporary circuses together with theatre, archives, museums, libraries, film and literature festivals.

She hopes the legacy of Circus250 will be that the circus will be recognised as an influential art form throughout culture and heritage in this country and that many more people will recognise this as the place where circus was invented. It is also hoped that through the events people will feel that the circus is part of their heritage and something they can not only enjoy as an audience but actually participate in. She would also like incorporate circus into the national curriculum as a PE option in every school in Britain.

“Because the circus travels everywhere has a circus history. If you go into your local library archive, you will find circus posters, circus memories and circus photos. It’s part of the heritage. People risk their lives for you in front of your eyes, you can smell their sweat. It’s about as real as you get.”

As part of Circus250 Birkett is travelling around the UK and Ireland in the Circus250 caravan, which is an 11 ft, 1970s working caravan that she lived in when she was a circus artiste. She will be at the Swindon Literature Festival on Sunday 13 May. 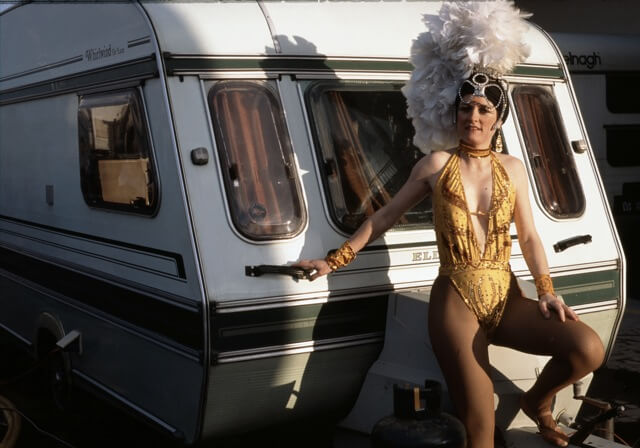 Dea Birkett, Circus250 Ringmaster in the 1970s working caravan that she lived in when she was a circus artiste

For more information on Circus250 events go to Circus Talk. And to get involved and become a partner email [email protected] to receive a newsletter and support about putting on circus-related events.

There are six dedicated Circus Cities as part of Circus250 with the following events:

In Bristol, home to more circus companies than any other British city:

The Lord Mayor’s Celebrations features a circus parade with life-sized elephant puppets winding through the streets in July and ‘Famished’, the new show by Norwich-based Lost in Translation, opens.

In Newcastle-under-Lyme, birthplace of Philip Astley:

In London, city of the very first circus by Waterloo:

CircusFest – the Roundhouse’s month-long celebration of contemporary circus – kicks off in April. The V&A is one of many major London museums joining in the celebrations with a Friday Late ‘Circus – Past, Present and Future’.

In Blackpool, home of the Tower Circus staging shows since 1894:

The town comes alive with circus celebrations, from the traditional Tower Circus to the cutting edge Grundy Gallery.

In Belfast, throughout the Troubles circus schools were places where the two communities met to create great work:

Weston Park Museum in Sheffield
Circus! 25 July to 4 November
A major new exhibition created in partnership between Museums Sheffield and The University of Sheffield’s National Fairground and Circus Archive

Across Scotland where John Bill Ricketts, the man who took circus to America, was established first at the Circus Royal in Edinburgh
– Circus of Horrors among other events