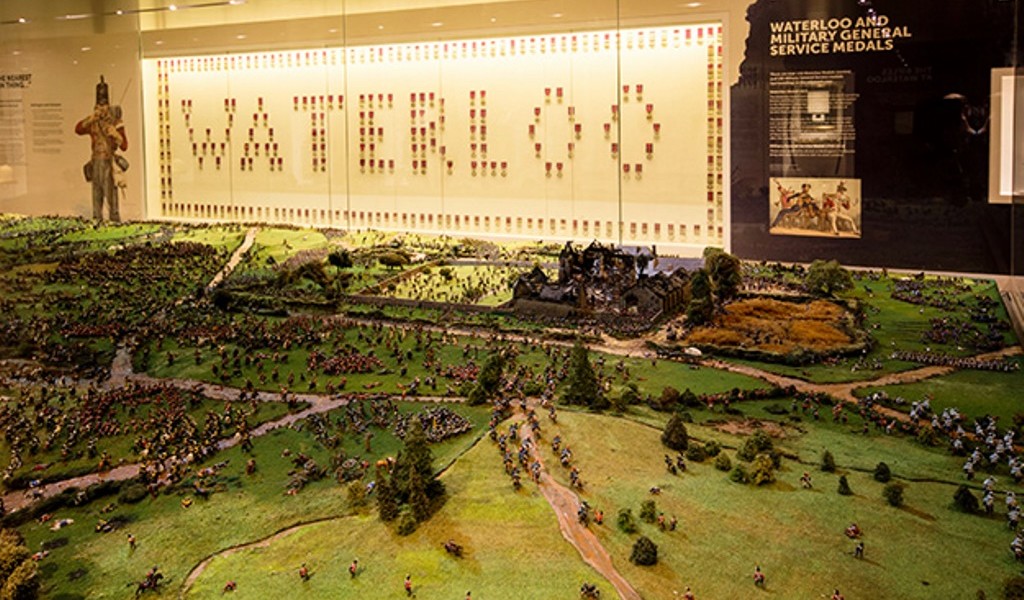 On 18 June it will have been 200 years since the Duke of Wellington defeated Napoleon in the battle of Waterloo in present day Belgium ending 22 years of continual fighting between Britain and France. Consequently the British Empire flourished in the 19th century and the battle will once again be remembered as a pivotal part of British and European history. Part of Wellington’s troops who fought in Napoleon’s defeat were two of the antecedent regiments of The Royal Green Jackets, the 52nd Light Infantry and the 95th Rifles, who with 1,000 men each played a leading role in the victory. And the Royal Green Jackets (Rifles) Museum in Winchester has recently opened a £210,000 exhibition to mark the 200th anniversary with particular emphasis placed on the roles of the 1st/52nd Light Infantry, aided by the 2nd and 3rd/95th Rifles in initiating the rout of the French Imperial Guard and the 1st/95th in defending vital ground at the Mont St Jean crossroads.

The exhibition, partly funded by a £100,000 Heritage Lottery Grant as well as donations and fundraising, has resulted in two-thirds of the display space stripped back with new displays created in its place designed by Designmap with the fit out completed by The Hub. “We wanted to tell the story of the battle of Waterloo and to emphasise the consequences of the event, while learning about the development of the Rifles regiments,” said curator Christine Pullen. “As part of the project a new multi-purpose space, primarily a learning space called the Kincaid Gallery [named after Captain Sir John Kincaid, a long-serving officer with the 95th Rifles], has been created, for school visits and talks.” The museum has the best collection in the country of artefacts from 1797 to 1815 including portraits, paintings and medals with Waterloo teeth, surgical instruments, uniform and weapons also being loaned for the exhibition. 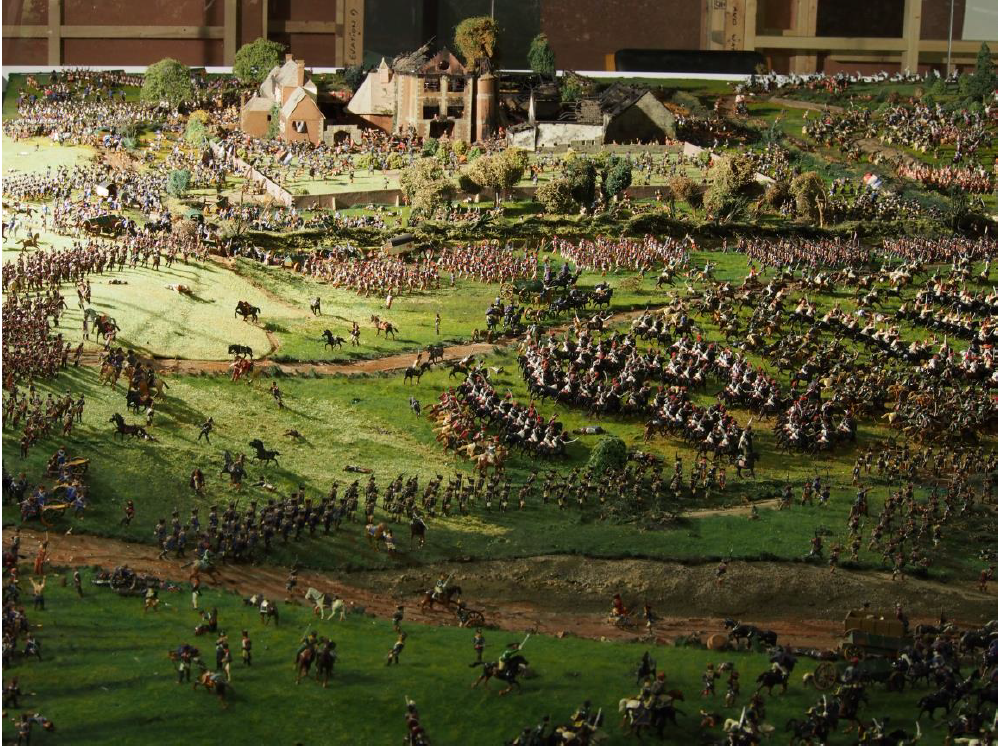 The Battle of Waterloo Diorama was conserved by Kelvin Thatcher and 30,000 figures were painstakingly, hand-cleaned during the conservation. Photograph credit Kelvin Thatcher

However, the centrepiece of the exhibition will be 24.5sq m diorama, a 1:72 scale topographical model depicting key actions of the battlefield, with 30,000 model soldiers and horses. Its conservation and new temperature-controlled display case accounted for 25 per cent of the total budget. The diorama was built by Valhalla Models between 1970 and 1984 and has been painstakingly cleaned and restored by model-maker of 40 years Kelvin Thatcher

“I had two tasks with the main aspect being to clean it and the second to restore it. It was filthy and had been collecting dust since the 1970s,” he said. “Without being in a proper showcase (it had a glass barrier around to prevent hands going in) it was grey with dust.” Thatcher faced many challenges concerning the diorama’s conservation, not least was removing the model from the museum, which meant cutting it up into 16 manageable pieces.

The process began in October and saw Thatcher and his artist wife Mary work on one panel each week. “Firstly we had to get the dust off the baize surface and we couldn’t brush it because it was bristling with soldiers. So I got a compressor and an air gun and I set up a low pressure air jet and worked on one side and my wife worked on the other side with a vacuum cleaner successfully catching the just that I was putting in the air.” They then cleaned each individual soldier, horse and building with a non-ionic detergent in distilled water by going over them with a very soft artists’ paintbrush. “Conservators will often use a cotton swab for this kind of work but that didn’t work because there were so many little sharp edges on the figures that it would have just dragged fibres of cotton off,” said Thatcher. “The model is now clean and in good condition and it’s in a proper air conditioned showcase, so there is no reason why any further changes should be needed.” 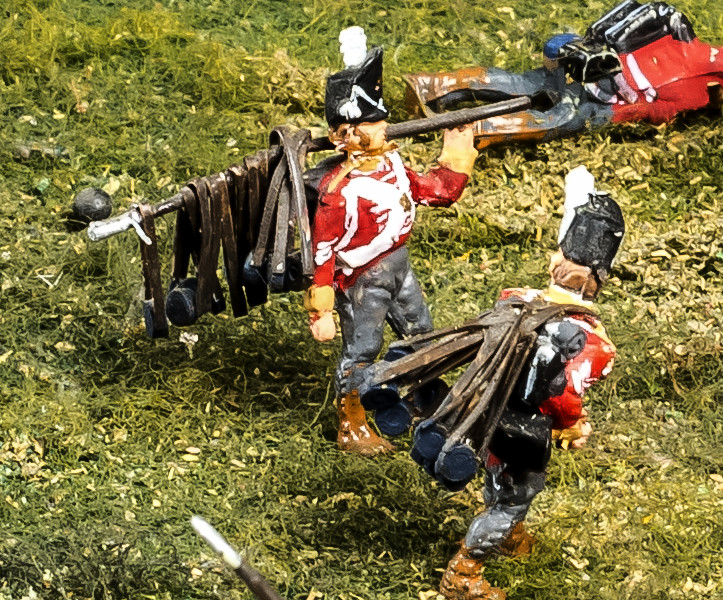 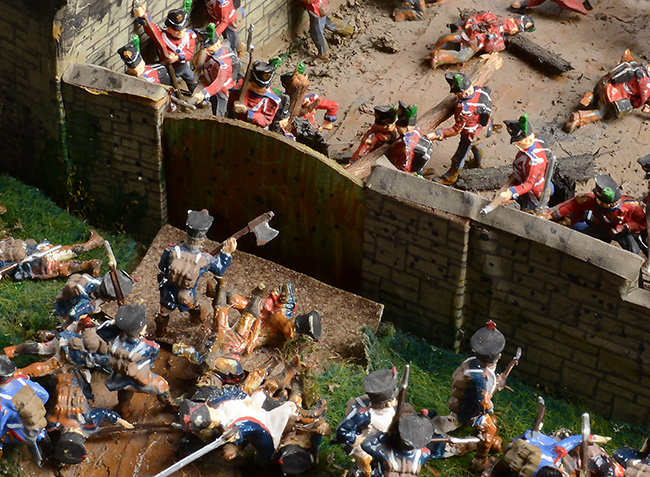 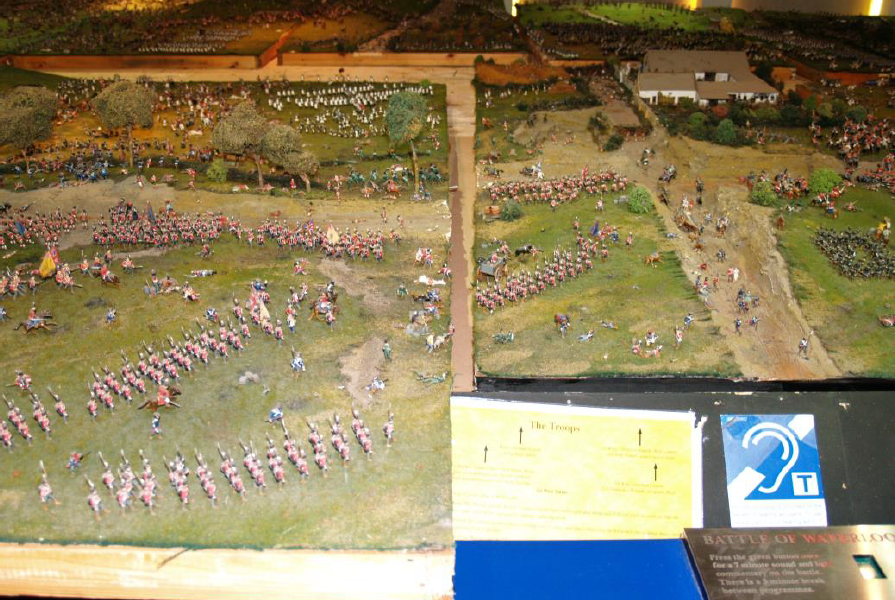 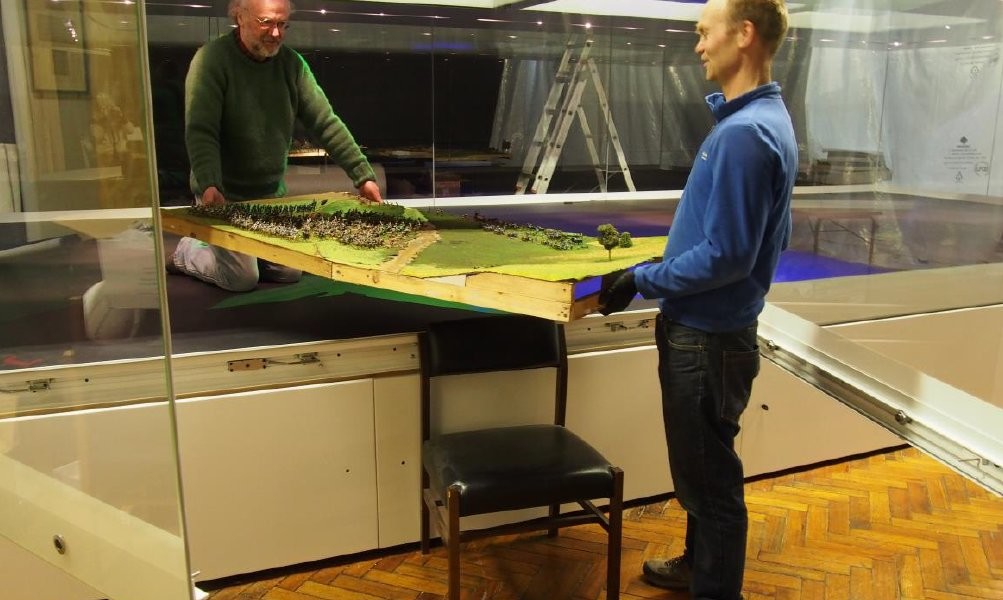 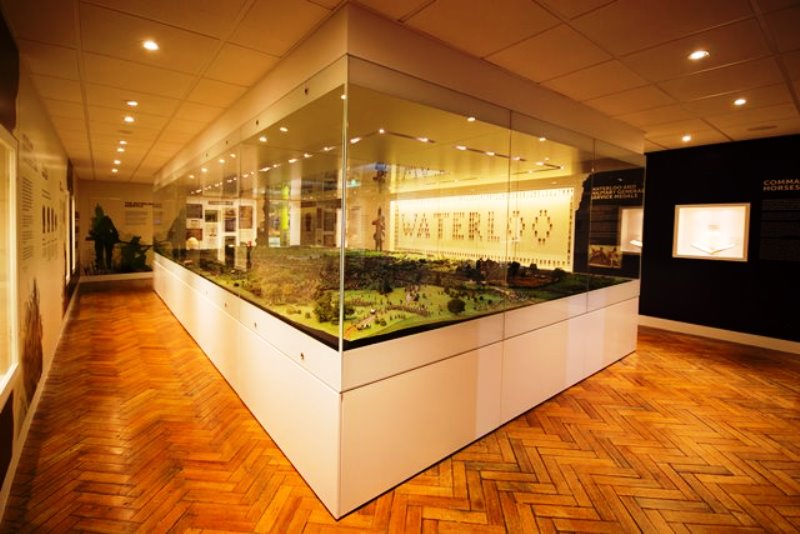 A temperature controlled diorama display case built by Click Netherfield now covers the diorama, ensuring the 30,000 figures on the model, that are susceptible to heat, remain at a constant temperature and dust free. As well as this, sound effects have been added with a commentary by journalist Kate Adie to bring the battle to life. The exhibition was opened by His Grace the Duke of Wellington on 25 March and also includes information boards, audio, maps, paintings and photographs.

The principle contractor, The Hub Ltd, was responsible for stripping out the whole space and then reinstalling the new layout, and worked closely with designers, Designmap and also with retired army officers, and at one point were joined for two days by half-a-dozen military volunteers. “It was quite exciting working with the military, a lot of whom were retired officers,” says Dominic Sore, project and business director at The Hub. “They have a very pragmatic approach to doing things, because if things don’t happen in the right sequence in the armed forces the consequences are dire. When we started on the rip out we were able to utilise some army personnel and had six privates, who worked with our site manager, to support us in our work. That allowed us to save a bit of money on our own labour and we put that back into the exhibition.”

As the principle contractor The Hub ensured the designs put forward could be built in a way that was in keeping with the space. “We were able to add our years of experience. On this project for example, the client wanted to reuse some of the existing showcases but when we got on site and took them apart we realised that it would be better if we remade them, so we were able to rebuild the showcases within budget. This proved to be better for the objects and collection and ensured they would last longer into the future.”

The Battle of Waterloo Bicentenary exhibition runs to 30 September 2015 – this will include a series of seminars and lectures to complement the exhibition. After this point the loans will be returned and the remaining exhibition will become permanent.

Fit Out: The Hub

The Hub: reinventing the visitor experience to commemorate a literary icon