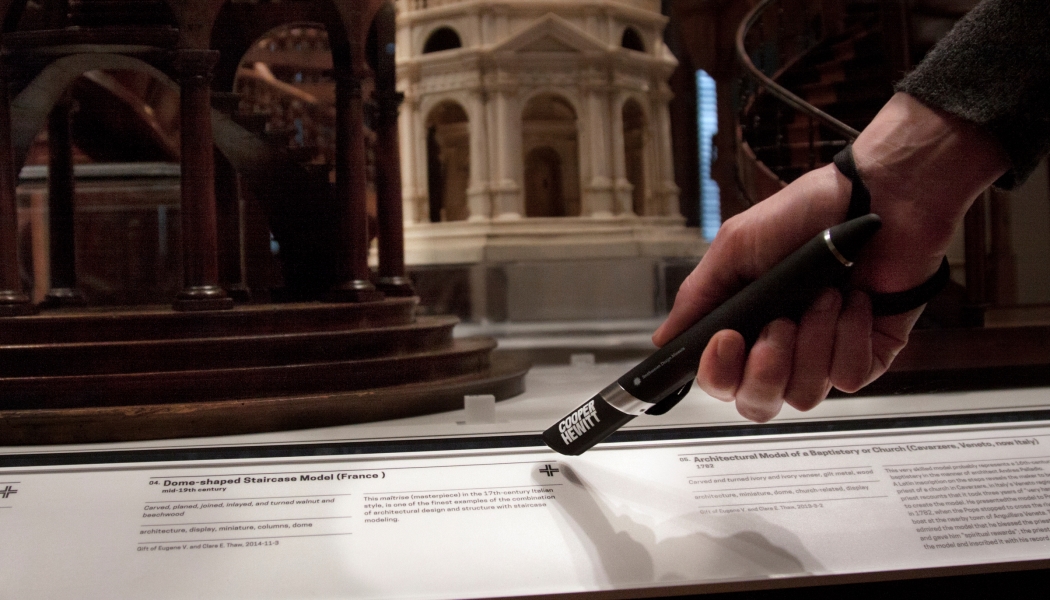 In March 2015, four months after a huge redevelopment project was completed, the Cooper Hewitt Smithsonian Design Museum in New York introduced the Pen, a new piece of technology that would enable visitors to collect objects and interact with its collection

When the Cooper Hewitt Museum reopened at the end of 2014 visitors were introduced to a full range of new interactive capabilities thanks to Bloomberg Connects, Bloomberg Philanthropies’ digital engagement programme. These included the opportunity to explore the collection digitally on ultra-high-definition touch-screen tables, draw their own designs in the Immersion Room, and solve real-world design problems in the Process Lab.

But it was a newly developed Pen, exclusively designed by the museum and its collaborators, which further enhances the visitor experience through the ability to “collect” and “save” information, which was most eagerly anticipated.

A technological device that is inspired by one of the most widely used designs, the Pen is a key part of the new Cooper Hewitt experience. Given at admission, it enables every visitor to collect objects from around the galleries and create their own designs on interactive tables.

At the end of a visit the Pen is returned and all the objects collected or designed by the visitor are accessible online through a unique web address printed on every ticket. These can be shared online and stored for later use in subsequent visits.

Detailed research into how The Pen has been received by visitorS is ongoing and from March 10 to August 10 the Pen has been distributed 62,015 times, with the total number of eligible visitors at 65,935, making the take up rate in the first five months to 94.05 per cent.

“Visitors continue to surprise us. Many of the creations that are being drawn in the Immersion Room are astounding in their complexity and they remain a firm favourite on social media,” said Sebastian Chan who was the inaugural Director of Digital & Emerging Media (2011-2015) at Cooper Hewitt and is now chief experience officer at the Australian Centre for the Moving Image. “A simple look at Instagram makes it very clear that visitors love the interactivity [of The Pen] and the ability to ‘put themselves into the museum’. Popular objects, too, continue to be a balance of ‘unexpected gems’ and ‘known favourites’.”

Not everyone who takes the Pen ends up using it. Some visitors wander around with it but choose not to save anything. Those who do use the Pen, though, use it a lot

Sebastian Chan, who was the inaugural Director of Digital & Emerging Media (2011-2015) at Cooper Hewitt

The Pen was created following Cooper Hewitt’s pitch to media design firm Local Projects to come up with a visitor technology that emphasised play and spoke to the specificities of a design museum, the concept for the Pen originated.

Beyond working as a tool for drawing, The Pen would encourage visitors to engage with the works on view in the museum, rather than looking at them through the small screen of the more traditional approach of a ‘museum App’.

The Pen combines two main technologies. Firstly, its interface with the interactive tables employs the sort of conductive materials common to touchscreen styli. Secondly, its interface with the object labels employs near-field communication technology. A sensor in the end of the Pen reads the information on small NFC tags embedded in the object labels.

This information is stored in the Pen’s onboard memory and can be read at the interactive tables. Using the large, ultra-high-definition screens on tables designed by Ideum, visitors can explore and manipulate the objects they have collected, discover related objects in Cooper Hewitt’s collection, retrieve contextual information, learn more about designers, design processes and materials, watch and share videos and even sketch their own designs. 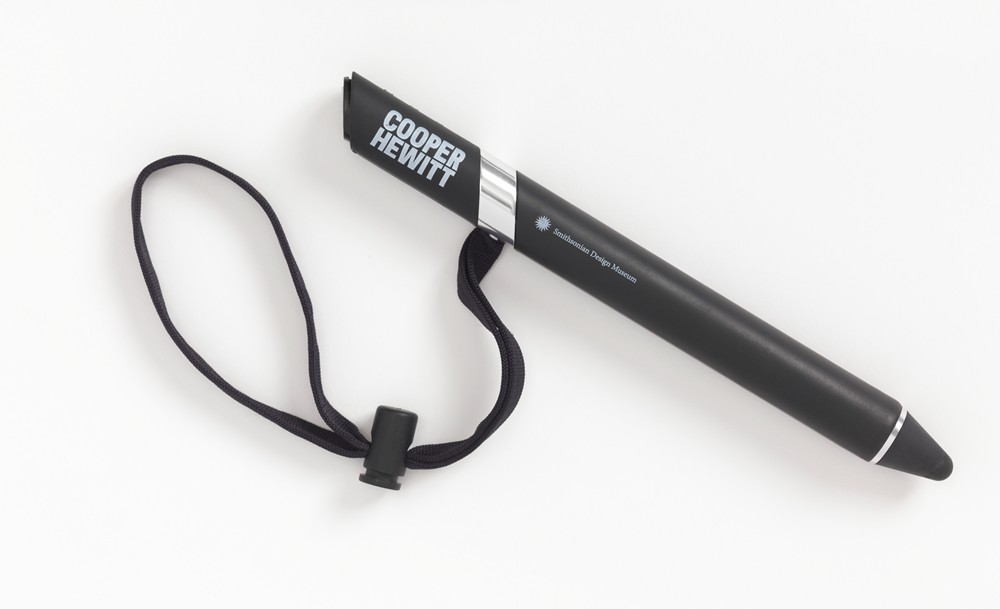 To convert the concept for The Pen into a robust piece of consumer hardware, Cooper Hewitt set to work with an international team, comprising GE; Sistelnetworks, a Spanish company that provides products and solutions for the wireless industry; and Undercurrent, a New York-based strategy and management consulting firm.

With the help of Undercurrent, Cooper Hewitt and subcontractors identified Sistelnetworks’ vWand, an inventory control device used in health care, as an existing product that met most of the technical requirements.

To re-engineer the vWand. GE’s industrial and interaction designers developed a sleek new form, while Sistelnetworks extensively modified the internal circuits and electronics to support new functionality. Undercurrent and MakeSimply, a New York-based sourcing and manufacturing management company, converted GE’s designs into prototypes, then took the final designs to their global partners for manufacturing.

Meanwhile, Cooper Hewitt’s own digital team was working on integrating the Pen into the museum environment. Tellart, an experience design firm in Rhode Island, was engaged to create custom electronics to pair visitors’ tickets with their Pens, and the museum went through multiple rounds of testing with different approaches to the operational logistics,

“The result is a device that embodies the very ideas that Cooper Hewitt conveys to visitors. Like so many of the objects in the museum’s galleries, it is the product of a collaborative, international industrial design process, exemplifying how designers solve real-world problems,” the museum says.

It also provides the museum with a unique insight into visitors’ behaviour, not only in the museum, but whether they continue to engage with the museum when they get home. 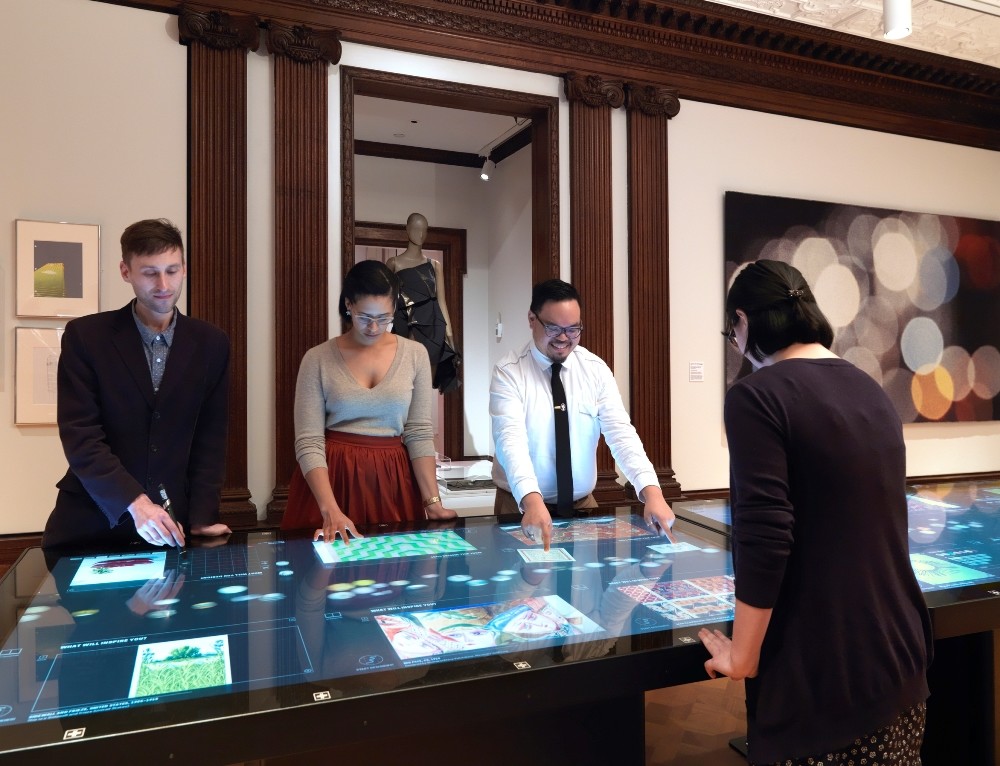 “Each ticket that is paired with a Pen contains a unique URL which allows a visitor to login after their visit to see what they collected and designed,” says Chan. “For well over 20 years this has been seen, perhaps misguidedly, as the holy grail of museum experiences – ‘they came to the museum and they enjoyed themselves so much, they went back to the website for more afterwards’. Falk & Dierking, amongst others, have emphasised that visitors recall their museum visits as an amalgam of experiences and often not in the categories or strict differentiations of specific exhibitions, programs, or objects that museum professionals expect.”

The museum is constantly coming up with solutions to technical problems or decreases in usage. For example, the first four months the percentage of visitors retrieving their visit data from the unique URL on their ticket was flat at 35 per cent. In July the museum started to see this drop to 30.65 per cent.

The museum believed that this dip may be have been related to the Pen box at the exit operating in a less-staffed mode (previously every Pen was collected by a front-of-house staff member who would verbally remind the visitor to check out their visit using the URL on their ticket as they left the museum).

This resulted in a slightly redesigned ticket with a simpler, clearer call-to-action and URL, as well as better exit signage as a reminder. However, the figures for post-visit access are vastly better than most other known initiatives in the museum sector where post-visit web use is usually well under 10 per cent according to Chan.

The museum also worked on improving the post-visit experience online with tweaks that will made it easier to navigate, explore, and export what visitors collected on their visit.

“Not everyone who takes the Pen ends up using it,” says Chan “Some visitors wander around with it but choose not to save anything. Those who do use the Pen, though, use it a lot.”

This ongoing research has revealed that from March 10 to August 10 the total objects collected was 1,394,030, the total visitor-made designs saved was 54,029 and the mean zero collection rate was 26.7 per cent.