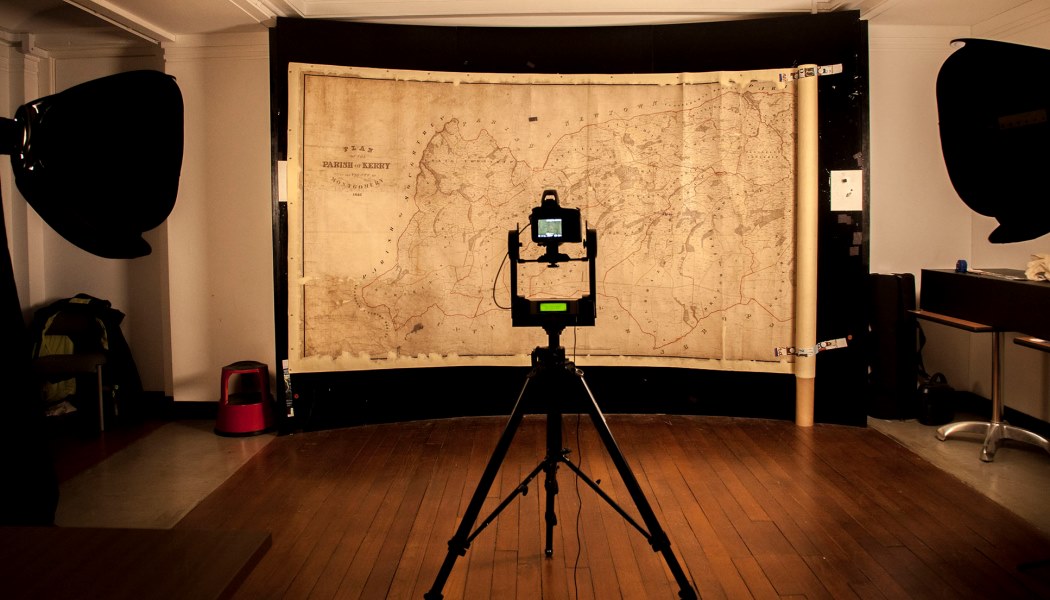 The Cynefin project is a three year project launched in October 2013 and set for completion this autumn, which involves digitising more than 1,000 tithe maps, includes substantial conservation work on the majority of them. There are also 27,000 pages of documents associated with the maps listing landowners, tithe payers, field names, land use, and tithes payable.

The project is run by Archives Wales, with the National Library of Wales as the primary partner and where most of the work is being completed. Other partners include Gwent Archives, Conwy Archive Services, People’s Collection Wales, the cooperation with many smaller archives in Wales and the National Library of Scotland. The project’s main funder is HLF with a contribution by the Welsh Government through the Museums, Archives and Libraries Division.

The conservation and digitisation work is now almost complete and the National Library of Wales team is currently in the process of working with 650 volunteers on its crowdsourcing website to get the maps georeferenced and the documents transcribed.

“Our current crowdsourcing interface is already an exciting opportunity for all those interested in transcription or georeferencing to contribute to a real project,” says Einion Gruffudd – Cynefin Project Manager, National Library of Wales. “It is already far more practical than ever before to study tithe maps across Wales, and their documents.”

This output, including a unified tithe map of Wales, will be made available to the public through the People’s Collection Wales and a geographic interface being developed at the library. The material will be searchable following transcription and is intended to be be attractive to users as well as being a foundation for more geographically indexed material.

The National Library of Wales has completed many previous digitisation projects involving images, journals, wills and newspapers, but this is the first large scale project involving maps that involves significant user involvement. “The public are a crucial part of the project, they are not only contributing on the crowdsourcing website, but also taking part in local projects held all over Wales which show in various ways how relevant tithe maps are to people’s heritage and history,” says Gruffudd. “These local projects have in turn also been a great help for us in getting more people involved.”

Once transcription is finished the interface will make it easy to search the data from the content of the documents and maps. The data will be searchable geographically without any knowledge of the locations of old parishes. The Tithe maps will be the first collection on the geographical interface and will open up the possibility for others will follow, “making it easier for users to discover material linked to locations, there will be fewer obstacles between people and their heritage”.

The smallest maps are scanned using the library’s standard A0 scanners and for the larger documents a GigaPan camera is used to shoot the maps, which are mounted on a curved magnetic wall. The team are using IIIF to load the maps to the website developed by Klokantech of Switzerland, who are using open source GIS tools. 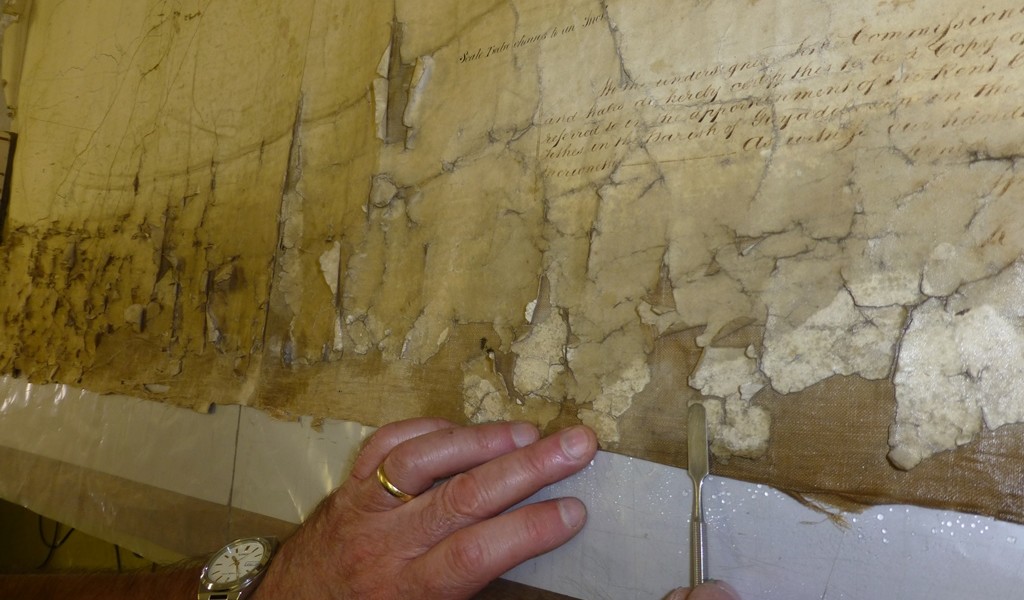 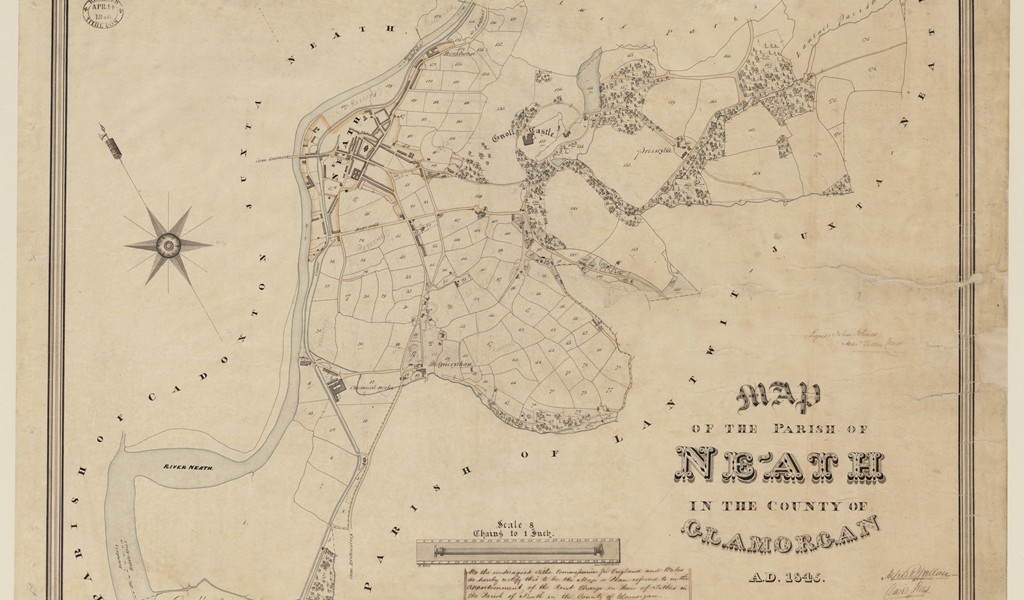 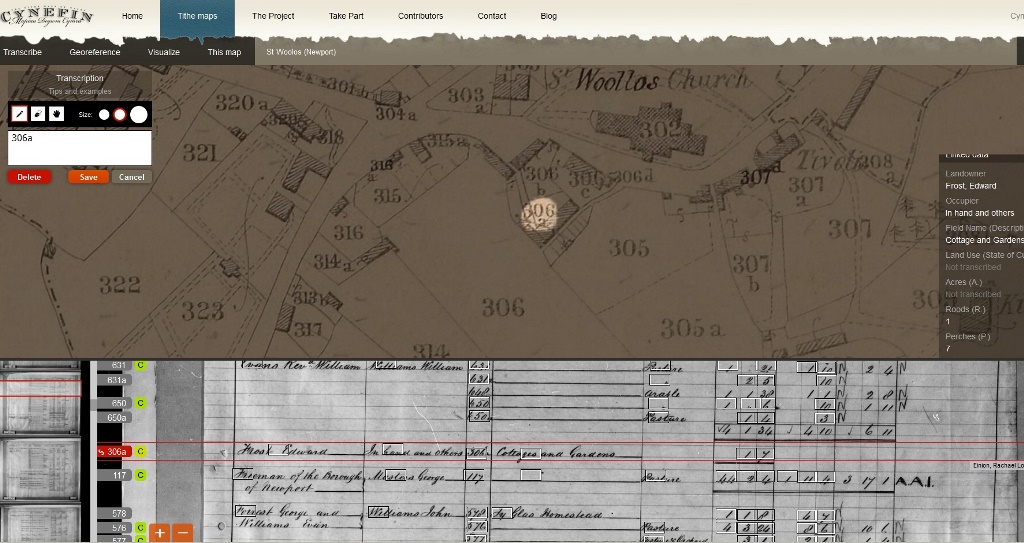 The map images are now online along with images of all the tithe apportionment documents. To obtain full value from this resource the website includes functions to crowdsource the transcription of the maps and documents, with the aim of making all the data searchable.

This complete collection of digitised tithe maps will provide a great opportunity to view Wales in the 1840s in a more holistic way than was previously practical. They are the most detailed maps of the period and cover almost 100 per cent of Wales. Examining old railway and canal networks is now possible and a wealth of information on the country’s social history is contained in the index of tithes.

“This project is crucial,” says Gruffudd. “At the National Library of Wales we are aware of our remote location, and the needs of our users, so this has naturally led us to prioritise digitisation and providing as much as possible of the collection online. This is entirely in line with the library’s mission to preserve the collection, to make it widely available, and to encourage its use. ARCW are also committed to improving online resources for archives in Wales, and for pursuing collaborative projects, of which this is one.”

Gruffudd says the Tithe maps were always a primary candidate for conservation and digitisation as they were both popular and fragile. The aim of the project from the outset was that all the maps and associated documents would be available to the public. “We are on target to achieve this,” he says. “We are also confident of georeferencing all 1,200 maps, but the transcription of over 27,000 pages of documents is ambitious and may take a little longer.”

The security of the website is also a major part of the project and has already had to tackle unwanted spammers that have proved challenging while developing the online community functions. “Security is an increasing priority as discussions among contributors about the most difficult documents and unfinished work will become more relevant as we approach the later stages of the project,” he says. “The National Library of Wales, like the Welsh Government, believes that the heritage should be available without cost for our users, a view supported by the HLF. So we apply Creative Commons Zero licences on our collection where we can, but the Tithe maps and documents are subject to agreements with third parties.”

This case study is part of an In Focus feature on Digitising Collections. Click here to see the introduction and links to three more case studies