Derby Museums Trust is showing it has the Wright stuff

Not only has Derby Museums Trust recently hosted MuseomixUK at the Silk Mill it is the first museum to take advantage of the Government’s SuperConnected cities initiative to get high speed Wifi (according to Cisco Analytics it’s the fastest museum Wifi in the world), has opened an institute dedicated world-renowned Derby painter Joseph Wright and has become an Arts Council England (ACE) Major Partnership Museum (MPM) after joining forces with Nottingham Museums and Art Galleries to receive £2,562,198 from the period 2015-18. 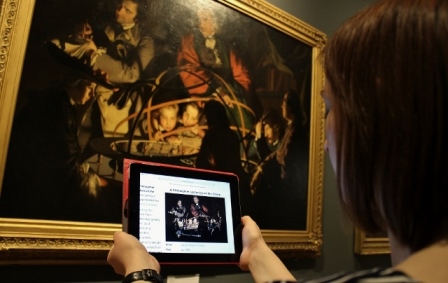 Using the superfast Wi-fi to learn more about Joseph Wright's painting, A Philospher Lecturing on the Orrery (1766). Derby Museums Trust

This all follows its move to become an independent trust in September 2012 bringing together the Museum and Art Gallery, the Silk Mill, built in the early 18th century, and Pickford’s House, and its continued collaborations within the city, with national galleries and international projects.

It is this approach to partnerships combined with its digital acumen – it has also worked closely with Wikipedia UK to improve its online information – and its facilities, which include a publicly-accessible workshop containing equipment such as a laser-cutter and a 3D printer that have led to increased opportunities and funding.

“We have basically decided there is no point hiding in our shell and worrying about lake of funding: you have to do really good stuff and partner with others to do things you wouldn’t achieve on our own,” said Jonathan Wallis, Head of Museums at Derby Museums Trust.

Since September 2013 volunteers have been invited to take part in an exciting community rebuilding project entitled Re:Make the Museum.

The project has enabled members of the public to become citizen curators, taking part in organised sessions, helping design and build new displays, furniture and fittings for the ground floor from scratch.

Having project has become so successful that the trust has spent the past 12 months travelling overseas and across the UK talking it, which is a first step towards a £17m Heritage Lottery Fund bid to turn the Silk Mill building into a centre celebrating both Derby’s rich industrial past and also inspire people to make things in both their professional and private life. 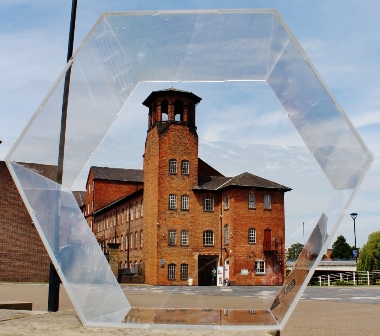 The Silk Mill, framed in a Hexpod, which is a display device designed and created by volunteers taking part in the Re:Make project. Derby Museums Trust

But before that in 2010, in further attempt to connect the community with its heritage, the trust opened a Joseph Wright of Derby gallery, followed in May this year by the Joseph Wright Institute – a combined gallery and research space dedicated to the renowned painter whose works include the famous An Experiment on a Bird in the Air Pump 1768 (National Gallery) and The Alchemist Discovering Phosphorus 1771 Derby Museum and Art Gallery. 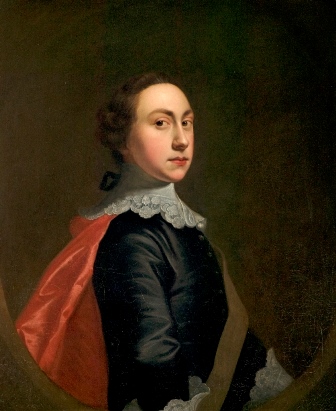 Derby-born Joseph Wright was famed for his masterpieces by candlelight. Self Portrait (1753). Derby Museums Trust

“The MuseomixUK event was a huge success not least because it proved successful the trust’s work to reinvent the Silk Mill as a cutting-edge museum,” said Wallis.

“It is a place where historical artefacts are presented alongside fully interactive visitor activities and regular group and community projects to inspire people to explore the art of making – tying in with Derby’s rich history of and its present day expertise in the art of manufacturing and engineering.

Museomix was established in France in 2011 as an annual event to encourage people from different sectors to experiment in order to find new innovative ways to develop and improve the museum visitor experience.

MuseomixUK Project Coordinator, Mar Dixon, who organises the UK leg of Museomix, which is independently run and funded from Derby Museums Trust, said the Silk Mill ticked all the event’s major boxes and was the second UK venue play host after Ironbridge Gorge last year. 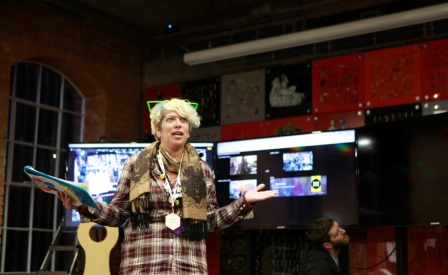 “The whole three days is a creative think tank,” she said. “Our community and the Derby community came together well and because of their experience with the Maker Faire they were able to explore different ideas and get more out of the exercises and other participants.”

During the MuseomixUK three-day event, held between 7-9 November, there were 70 delegates who applied and came from across the world including Italy, Russia, the Finland, Canada and the USA all sharing ideas and eager to make prototypes of those ideas.

“When I was scouting potential locations I saw some amazing museums but I had heard a Derby Museums Trust talk at a conference and later conducted an interview via Skype of the whole Silk Mill,” she said

“It all married up with our MuseomixUK ethos and it ticked all the really big boxes. I also heard about the Wifi which is essential to run MuseomixUK as everyone has two or three devices of their own.

“Additionally, I teamed up with Google Glass so we were using nine pairs of the wearable tech to document the teams also.” 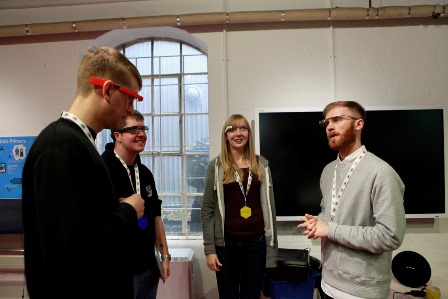 “We have to make sure a venue is good for us and they have the room, a fabrication lab (where you can fabricate items with laser cutters and 3D printers) so we can make prototypes of the ideas and designs to see if they work,” said Dixon.

The event ran alongside other Museomix events at museums in Lille, St Etienne and Arles in France, Geneva in Switzerland and the Montreal Museum of Fine Arts in Canada, with participants sharing ideas over the internet.

It followed the third Derby Mini-Maker Faire at the end of October, which attracted 2,500 visitors with the aim of inspiring the next generation of makers.

“MuseomixUK, and the Mini Maker Faire before it, proved that the Silk Mill is able to host major events that are of national and international importance and our WiFi was an integral part of its success,” said Wallis.

“During MuseomixUK, not only did we use the internet to control a robot 3,000 miles away in Museomix Montreal, at one point we had 247 different devices connected to the WiFi, moving 60MB of data a second, which is remarkable for a public building.

“MuseomixUK was another sign that the museum is now internationally important, which is a wonderful endorsement of the skills and resources that we have in Derby and in the UK as a whole.”

Among the ideas generated at the event was ‘Suck, Squeeze, Bang, Blow’ which illustrated the processes inside a jet engine by projecting a graphic on the floor beneath the engine and asking participants to mimic the forces in play to bring the graphic to life. 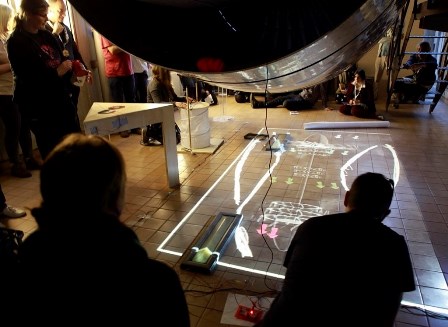 Teams at Museuomix were able to use laser cutters, 3D printing and projectors to illustrate how a jet engine worked. Derby Museums Trust

“From our point of view the links we made with participants have energised us and they have gone away singing our praises.

In the long-term we have made some friends with these participants,” said Wallis.

“They know who we are and if there are opportunities for future collaborations or work to be done together we have the contacts to help.”

Derby Museums Trust continues to work on projects revolving around Re:make and also works with corporate organisations and has worked with the Arts Science Prize at the Massachusetts Institute of Technology
in Boston.

This follows the Joseph Wright international tour at Yale Center for British Art in New Haven in 2008, where 85 artworks were loaned.

“We continue to work with organisation were we can and projects around well-being. It is very important to know about making and our manufacturing past and I think making things in Museum is going to be prominent in the future,” said Wallis.

In July ACE announced five new MPMs increasing the number from 16 to 21 with these institutions receiving extra funds and also passing on areas of expertise to other local museums.

“Ace recognised the good work we have been doing,” said Wallis.

“It’s useful to show city council and other sources of funding that we are on an international stage and have strong partnerships and, if we want to loan or collaborate, it’s easier as the understanding is there because we have done it before and we are working at a certain level.

“Of course museums will benefit in the region and we will act as mentors: it’s also about how we share what we do.”