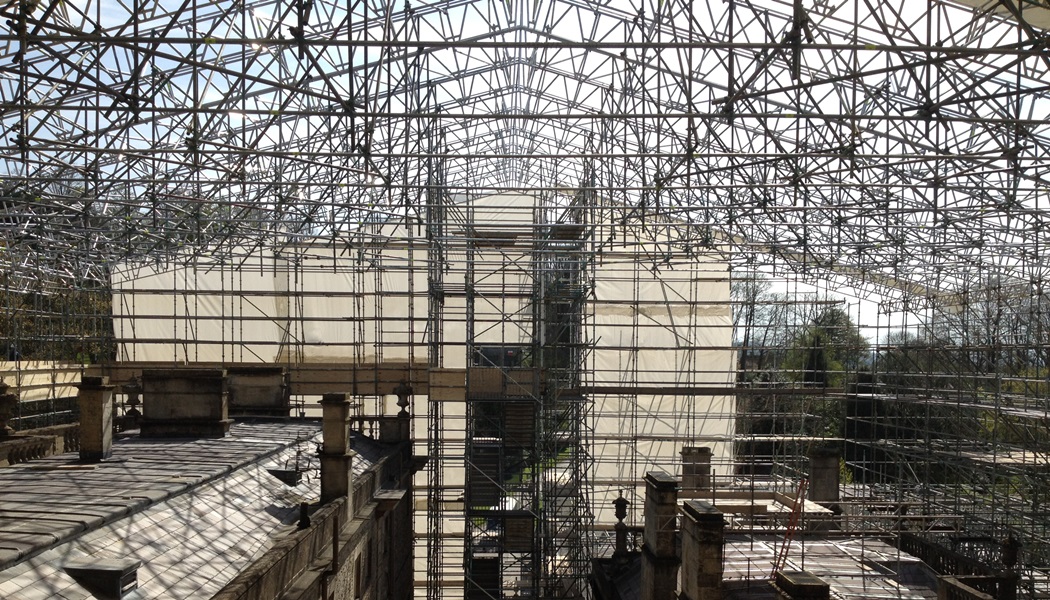 Dyrham Park gets a roof with a view during National Trust’s £3.8m conservation project

When it comes to restoring the roofs of listed mansions it is rare that the public get to see the work progressing from a viewing platform but that’s what’s happening at the Grade I listed Georgian mansion, Dyrham Park, near Bath as Purcell complete a restoration project for the National Trust

The conservation project at Dyrham Park began in January 2015 and one of the main elements are repairing and re-slating the main house roof as well as repairing stonework, providing lightning protection and upgrading the house to humidity controlled conservation heating. The greenhouse roof will also undergo repairs, wheelchair access will be improved and a new biomass boiler built. Dyrham Park is an exceptionally popular visitor destination and there was a question whether major works on the house might impede on the visitor experience. However, the National Trust in conjunction with Purcell conceived a solution enabling the house to be accessible to the public while the construction phase progresses.

As part of the big conservation project to replace the leaking roof, visitors are being given the opportunity to go up on a fully accessible scaffold walkway and view the roof work first-hand. A vast scaffold and wrap have been specified to protect the building during the construction phase. The temporary scaffold roof with vinyl cover leaves space for visitors to actually see the roof of the house and the works being carried out. A 230m long level walkway gives unprecedented views over the split level roof. Not only can they see the repairs on the roof, but also the house’s insulation, wiring and structure where slates are not in place. There are two 7.5m viewing platforms which give spectacular views across the deer park and enable visitors to appreciate the sheer scale of the house and surrounding grounds. 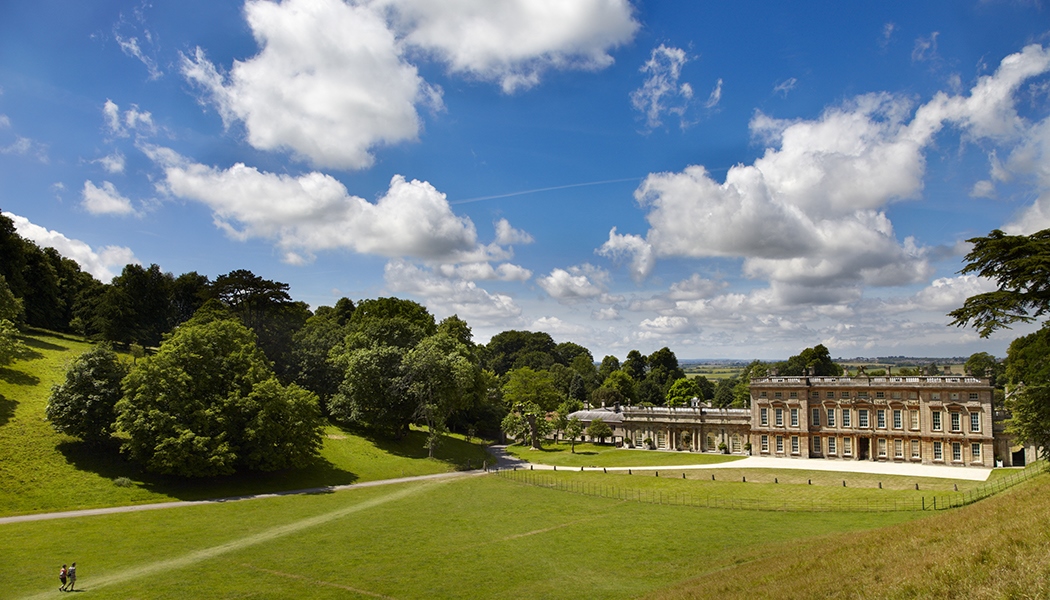 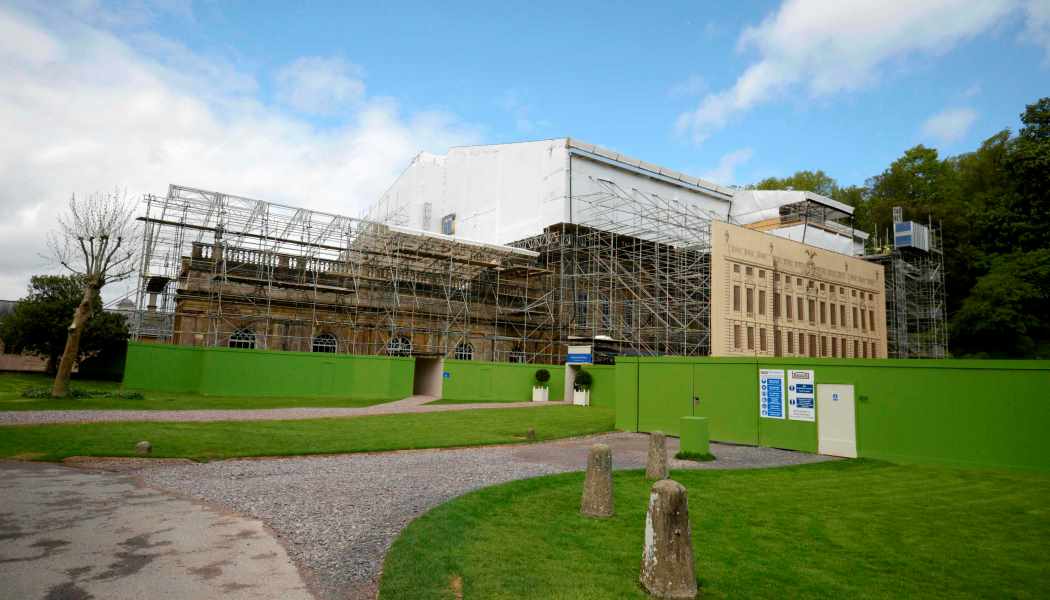 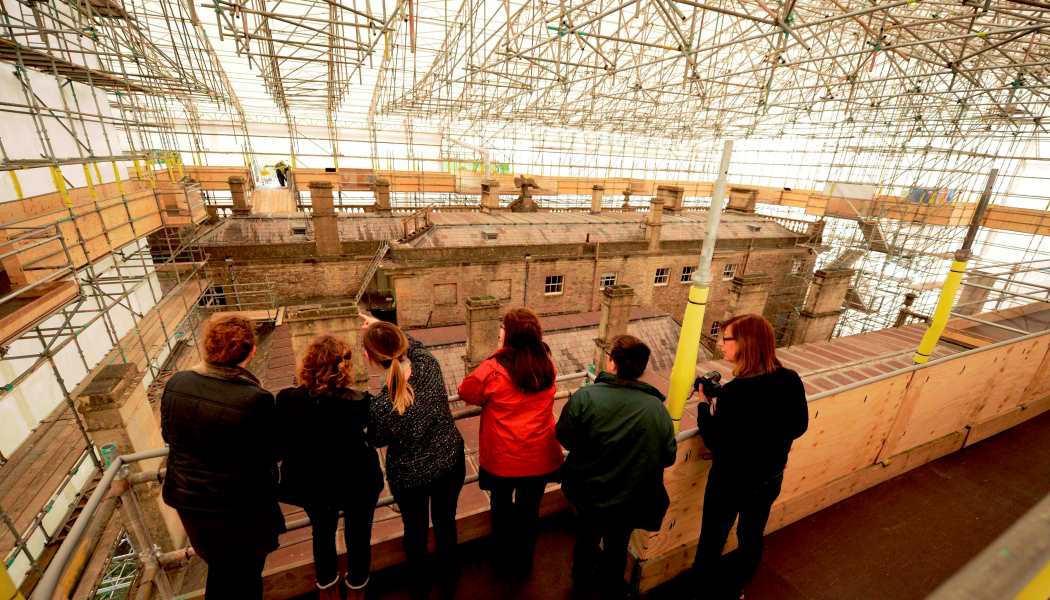 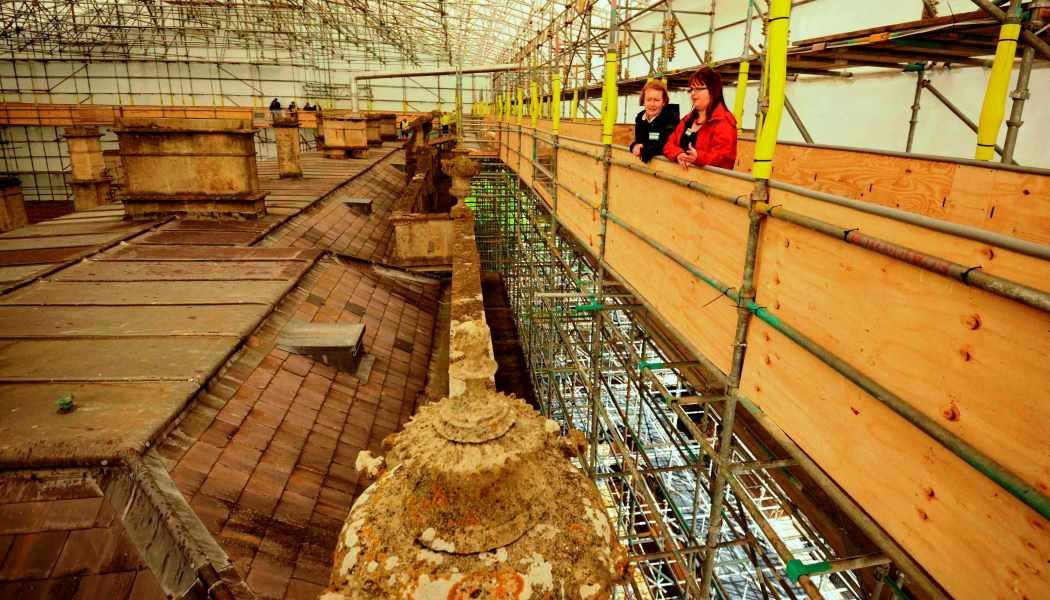 ‘The conservation work taking place on the roof of Dyrham Park right now is phenomenal and giving the public the opportunity to observe the sand-cast lead and Welsh slates being re-laid is very unique,” said Purcell’s project architect Izaak Hudson. “As the project architects, we’re proud of what this has enabled us to offer the public and achieve for the client. Ensuring that the platform is fully accessible was highly important to us and the feedback from visitors has been fantastic.”

The property was built by civil servant William Blathwayt between 1692 and 1704 and the interiors remain little altered and there still remains a superb collection of Dutch art and ceramics of the period. Prior to the repair scheme, the roof had reached the point where it was no longer economically viable or cost effective to continue to patch repair it. After the Ministry of Works acquired Dyrham House from the Blathwayt family in 1951, repairs were carried out on the roof in the 1950s, but it has been more than 150 years since its last full replacement in the 1840s. The national Trust Acquired the house and 270 acres of land in 1961.

“The building is Grade I listed and so there is little opportunity to change the roof slates or the way they are laid in order to protect its heritage and architectural significance,” says Hudson. “The lead on the top section of the roof has many defects, such as the lead bays being too wide, that have contributed to its overall poor condition. These defects have all been designed out in the latest works to eliminate this recurring in the future.”

Replacing the 9,400 slates on the roof which will take six months to lay and as part of the project, visitors have the chance to sign a Welsh slate before it is laid and leave a message for future generations. With 8,000 on offer the National Trust is hopeful that visitors and supporters of the project will take the opportunity to purchase one of the slates signing packages before works are complete and contribute to the funding.

“It’s not very often that you get a chance to be a part of a historical building, but that’s exactly what is happening at Dyrham Park this year with our Sign a slate campaign,” says its online campaign. “You could join the likes of Downton Abbey author Julian Fellowes, Bath artist Nick Cudworth and Bristol artist Luke Jerram in signing a slate, which will become a permanent part of Dyrham house.”

Works on the roof are due to complete at the end of 2015 and the scaffolding will take around two months to dismantle because of its vast size.

The last roof tours will take place before Christmas and completion of the entire project is expected to be in April 2016.

The scaffolding at Dyrham Park is so vast it will take two months to dismantle. Photograph copyright Purcell Architects