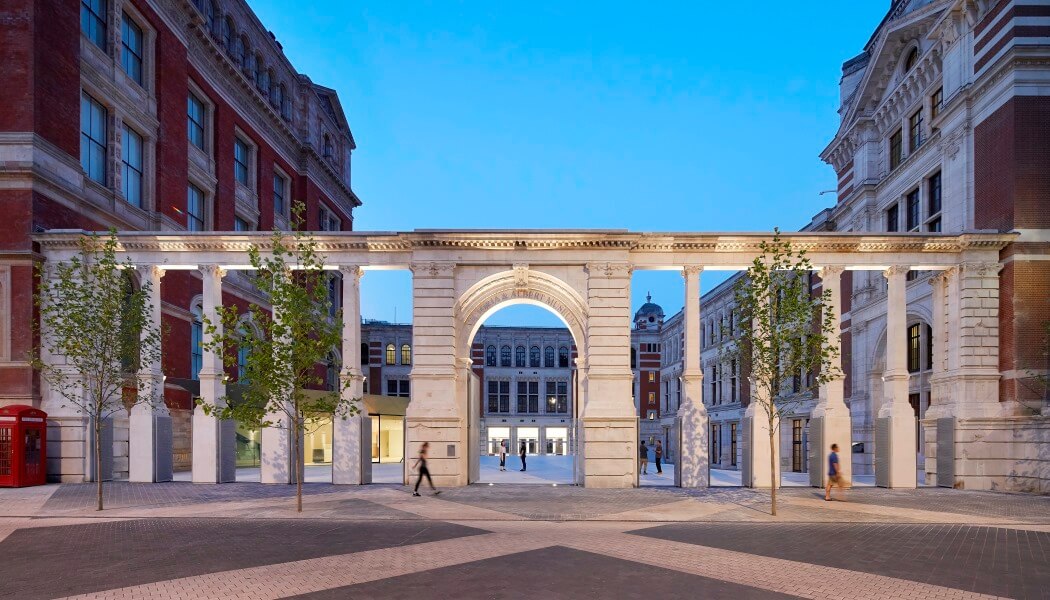 Exhibition Road Quarter – a new public entrance at the V&A

The Exhibition Road Quarter is part of the V&A’s FuturePlan programme, which has seen more than 85 per cent of the Museum’s public spaces transformed in the past 16 years. The project will have a grand opening on June 30 and reveal a new purpose-built gallery and a porcelain-tiled public courtyard and café that will be accessed through the remodelled arches of the 19th century Aston Webb screen. This will open the museum up to Exhibition Road and create new public spaces and a new relationship between the museum and the street. And, for a museum that attracted 3,022,086 visitors last year, the new entrance will create a better flow of visitors into the historic building.

“There are a few interconnected drivers for the project. The first is the Exhibition Road Quarter was quite a redundant area of the museum that was underused, certainly in recent decades,” says Tim Reeve, Deputy Director and Chief Operating Officer at the V&A. “The reason it is such an interesting space is that it gave us the opportunity to physically reconnect with Exhibition Road. Everyone is quite familiar with the big Aston Webb façade on Cromwell Road and the grand, cathedral-like entrance but the physical entrance onto exhibition road has been much more muted. We have the tunnel entrance and the more modest smaller entrance on road level but there is nothing that really gives you a sense of arrival to the V&A off Exhibition Road and of course for the V&A, along with the amazing constellation of institutions up and down the road, it’s fundamental to the idea of Albertopolis [the Victorian vision for a city of arts and sciences in South Kensington].”

Construction for the new quarter began in 2013 and the 2017 opening coincides with the V&A’s 165th anniversary. As part of the developments the Aston Webb screen was painstakingly removed and put into storage at the end of 2013, in order for the majority of the masonry to be reinstated at the end of the project. The Aston Webb Screen was part of the museum buildings designed by Webb (who won a competition to extend the building) and opened in 1909, and acted as an architectural intervention to hide the museum’s Victorian boilers. The area behind it was also used as back of house storage for the museum with no benefit to the public. Now the area will be fully accessible from the street and transformed into a creative public realm. The screen itself originally featured a solid stone wall facing Exhibition Road (on the west side of the museum), with a crested central arch, and topped by a colonnade that allowed passers-by a few discrete views of the surrounding buildings. Now the colonnade has been modified so visitors can walk through the historical structure and into the new courtyard. It will now be possible to see the previously hidden facades of Aston Webb’s original buildings, and also detailed sgraffito decoration, which will be made publicly accessible for the first time since its completion in 1873. 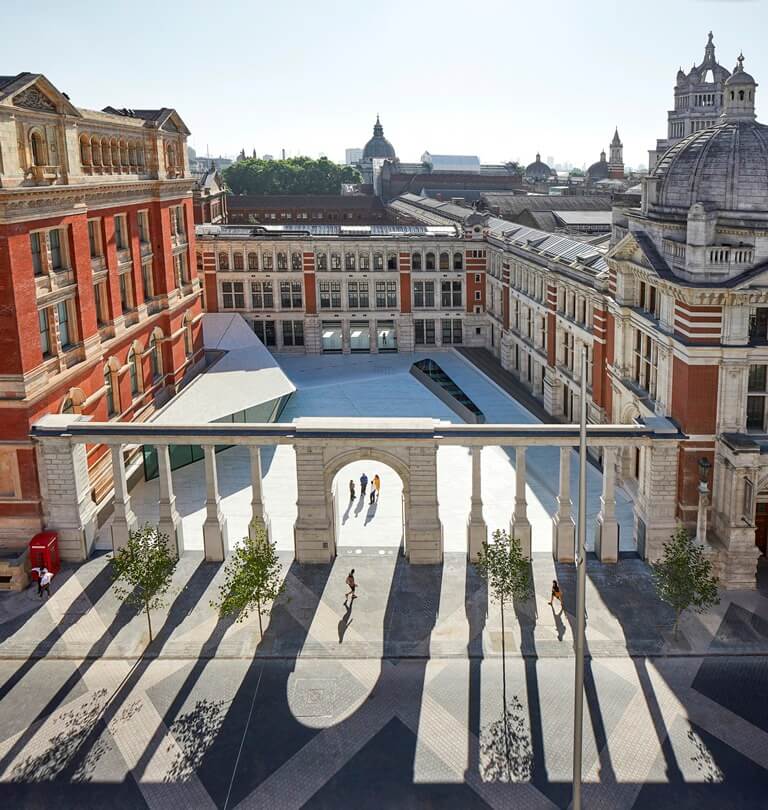 An aerial view of Exhibition Road, the Aston Webb screen and the new Exhibtion Road Quarter at the V&A. Photograph by Hufton Crow

Behind the design of the Exhibition Road Quarter is Stirling Prize-winning British architect Amanda Levete and her practice AL_A, that has also designed a new café set in the courtyard.

“It’s a fantastic open air space, it enables you to pause, it enables you to reflect and at the same time it reconnects the public with the buildings, surrounded by the Henry Cole Wing (named after the museum’s first director), that were closed off for decades and could not be appreciated from certain angles.”

Reeve says visitors will finally be able to understand the architectural developments and evolution of the V&A’s buildings and façades that have been unseen and under-appreciated for decades. “Just to be able to stand in the space in the open air and understand how this building was put together and how the courtyard fits into that I think is an opportunity we have never had before. This important architectural façade is a Grade I Listed building and has been hidden from view and I think people will really appreciate it. They will get that sense of relaxation and the feeling they can dictate the pace of their entry to the V&A. It’s a space to just breathe; just getting to the V&A for a lot of people is quite a busy experience. You’re probably going to get a train into London, if not you’ve probably been on the underground or a bus. It can be pretty hectic.”

The new entrance will offer visitors a much more seamless and less frenetic experience by having two major options of entry. “I think traditionally when you go into a major attraction or a major cultural attraction you quite quickly get the impression that somehow you are being processed and there isn’t always that opportunity to pause and to take in your surroundings and to think about what you might want to do before you actually go into the museums and start to enjoy the experience there.” 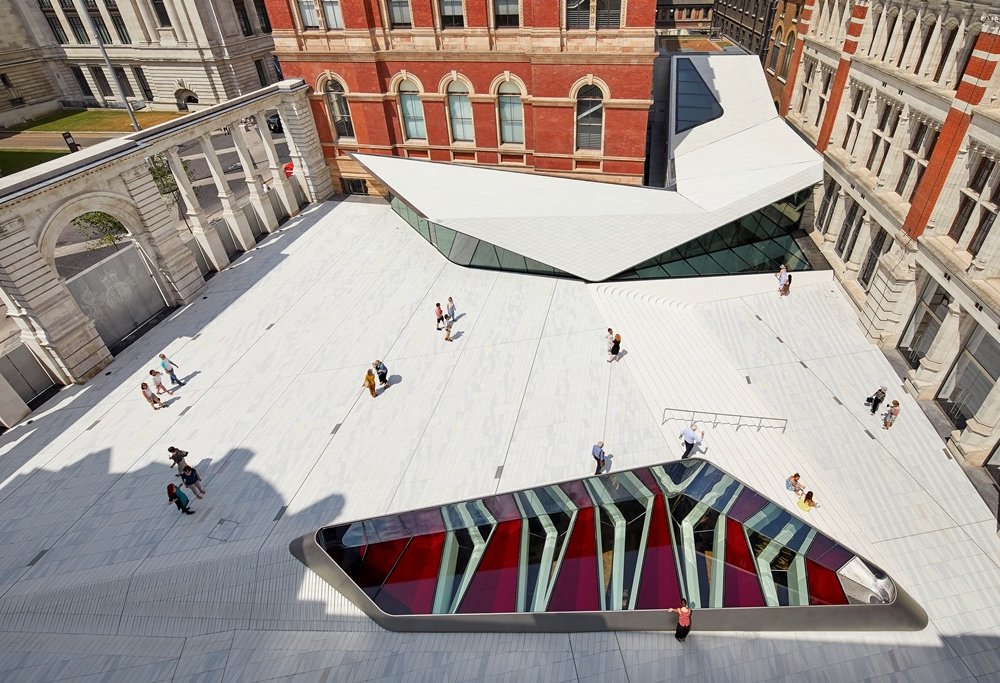 An aerial view the porcelain-tiled public courtyard and café at the V&A. Photograph by Hufton Crow

One of the major elements of the Exhibition Road Quarter is this subterranean purpose built exhibition gallery. All of the museum’s future blockbuster exhibitions, such as the current Pink Floyd show, will happen in what will be known as the Sainsbury Gallery. This means that the new entrance will be primarily, but not exclusively, catered for the big events. As Reeve himself says: “At the moment finding the exhibition galleries is not particularly straightforward. It will be very easy now for visitors who are coming to see an exhibition to find it and go straight into it.” 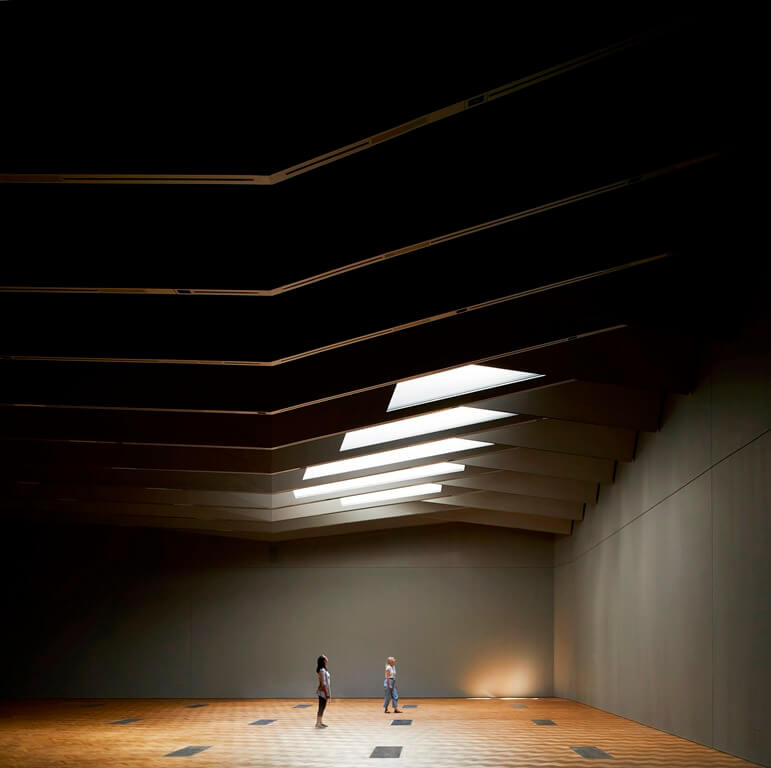 The new Sainsbury Gallery was excavated to create a huge underground space that will host all future blockbuster exhibitions at the V&A. Photograph by Hufton Crow

The Sainsbury Gallery has been essentially excavated through earth that has lay undisturbed through millennia. Working with Arup, the project has involved digging down hundreds of feet to create the exhibition gallery. The Sackler courtyard itself, the public space, sits right on top of it. Reeve says it was a conscious decision to go down rather than up with this particular building. It’s a stark contrast to previous plans for the site. The Libeskind spiral, announced in 1997 and shelved in 2004, would have risen up and protruded out into Exhibition Road and lost the public realm element of today’s Exhibition Road Quarter.

“For me the Public realm is hugely important and I draw a distinction between interior public realm and exterior public realm and I think all museums and cultural institutions have a civic responsibility, a sense of this is for you the general public to enjoy. I think there is something quite particular about external space in the middle of the city and for me it’s about the visitor being able to dictate the pace of their visit to consider what they are there for and what they want to do. To be able to relax and take in rather than you need to get a map and start going on your route. There is something really generous about well-designed public realm and public spaces, especially open air spaces, there is a freedom about them, it’s not transactional space. In the context of this public realm in and around our museum I think it’s the ability to just stand back and look at the museum and understand it as a piece of architecture rather than just a suite of galleries.” 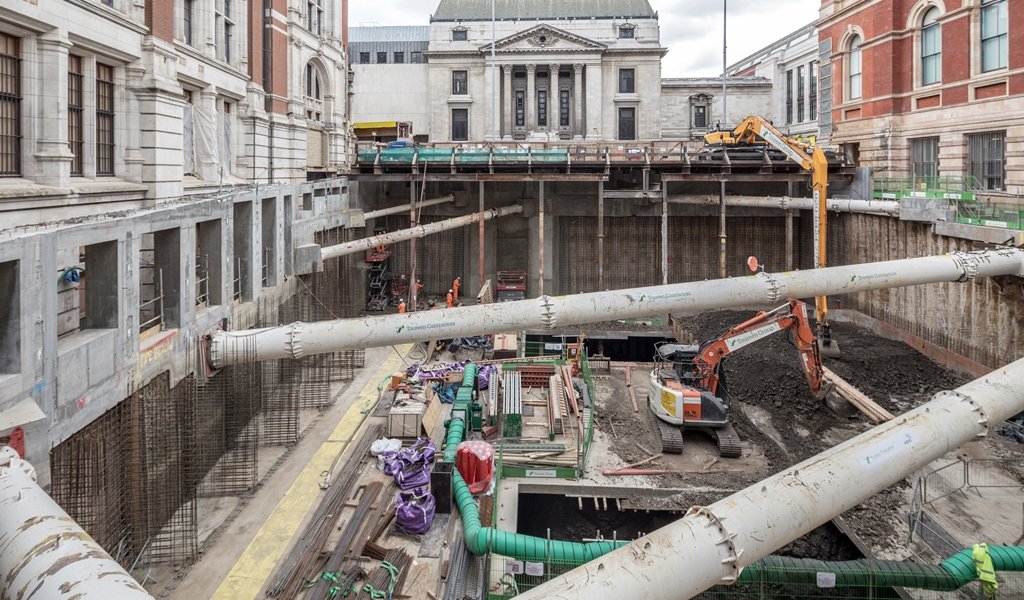 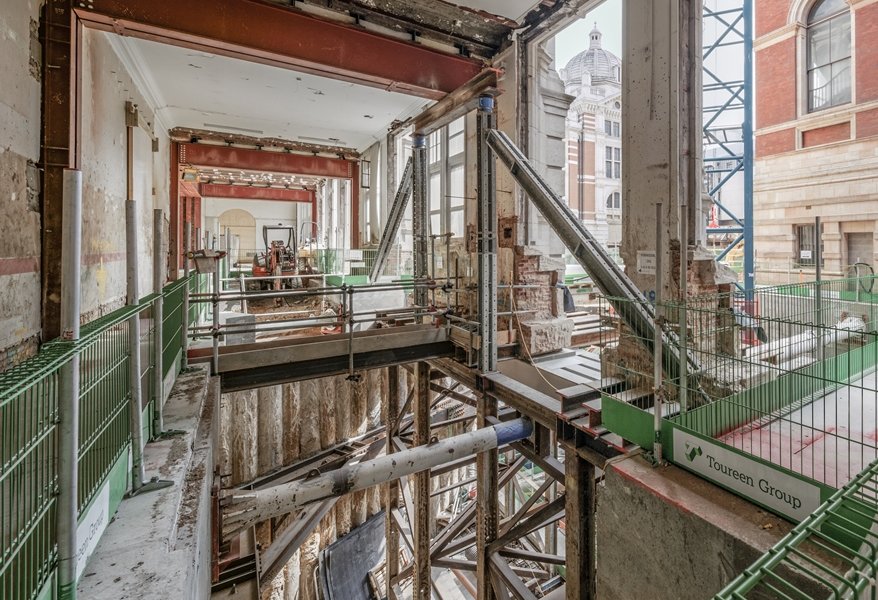 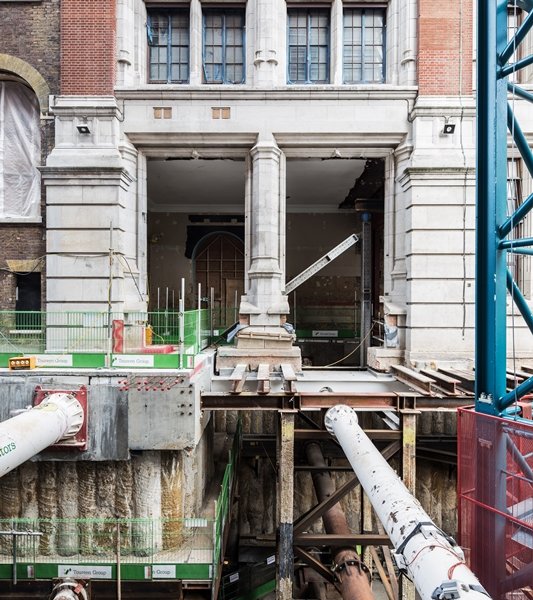 The Exhibition Road Quarter project has also opened up new opportunities for the space that the blockbuster exhibitions will vacate. It will allow the V&A to better reveal the north east quarter of the museum. Currently the galleries for major exhibitions are within what are called the north and south courts of the north east quarter and Reeve says the architecture hidden away is both architecturally and decoratively stunning.

“These galleries are a really important part of the museum’s architecture and now we will have the opportunity through developments in Exhibition Road to close down exhibitions in the north east quarter and commence this big reveal project involving permanent galleries.”

The challenges of the Exhibition Road Quarter have been engineering in a very confined space in the middle of London surrounded by Grade I listed buildings and Reeve says the digging has been very exciting but hair-raising as they have had to feel their way through a very complex process. “There were parts during the excavation where we had to prop up the original V&A while we were tunnelling underneath it. The beauty of that for the V&A is that a big part of our story is design, so the challenges we are dealing with there are an important part of what we try and understand and communicate to visitors. So it’s nice to have a project of our own that we are undertaking that really raises the profiles of those disciplines, particularly on the engineering side.”

This article is part of an In Focus feature on Public Realm in Museums, which also includes innovative projects from York Art Gallery and Hepworth Wakefield. It was edited on June 29 to include the latest images.