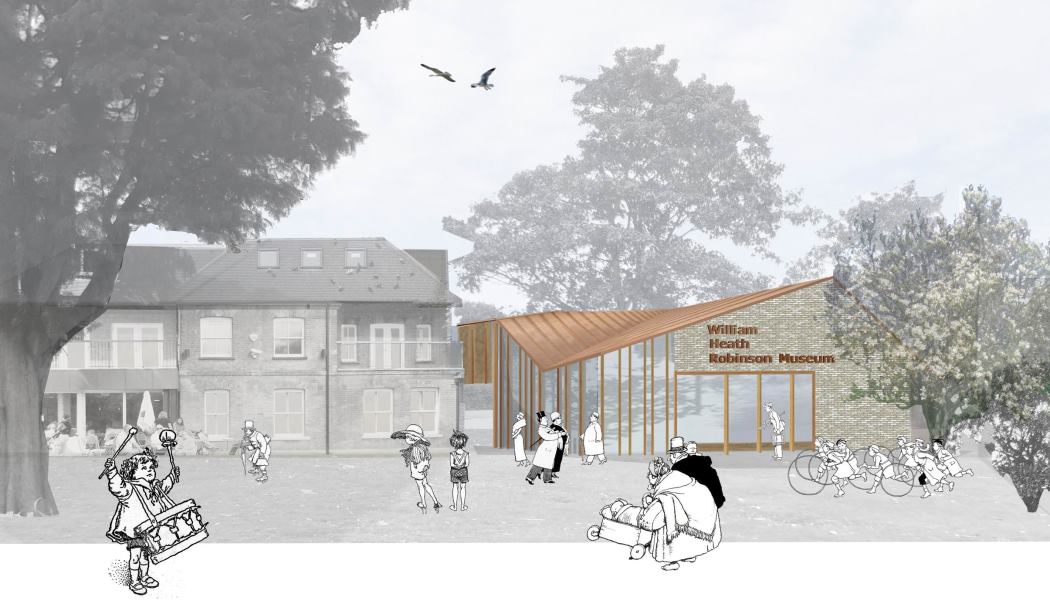 Building work has begun on a dedicated museum to the famed illustrator Heath Robinson in Pinner, in the northwest London borough of Harrow where he lived from 1908 to 1918, and produced some of his most significant work

Following an intense year fundraising to meet an increase in construction costs, The West House and Heath Robinson Museum Trust, with the William Heath Robinson Trust (which owns the collection of the artist’s original works) have finally welcomed the builders on site.

The new museum will include a Heath Robinson Gallery, special exhibition gallery, conservation and storage area, activity room and shop, and will bring to the community opportunities for learning, volunteering and engagement.

The museum’s delivery has almost been as complicated as one of Heath Robinson’s own contraptions with years of successful planning, fundraising and grant awards, including a HLF grant of £1.13m in December 2013, almost being dashed by a significant hike in the project cost just as building work was ready to commence and a contractor selected. There then followed a process known as value engineering, in which the The West House & Heath Robinson Museum Trust looked at ways of reducing the cost of the museum’s design without compromising the delivered performance of the building.

Having minimised the building costs the West House & Heath Robinson Museum Trust went back to the HLF and asked if they could be given an increase in grant in proportion to the increase in building costs. Last month the HLF agreed to increase the grant by £171,000. The Trust realised that any further delays would only result in further cost increases and last week a contract was signed with Philiam Construction Ltd, based in Bushey, Herts, to build the new museum. The company is now on site and construction has started. The forecast date for the opening of the museum is May next year.

“We are so grateful to the HLF for the additional funding,” says Cynthia Wells, trustee of The West House and Heath Robinson Museum Trust. “And we are now pressing ahead with raising the £140,000 remaining partnership funding.”

The grant increase was necessary due to the unexpected and unavoidable costs and HLF strictly assessed the request against its outcomes. 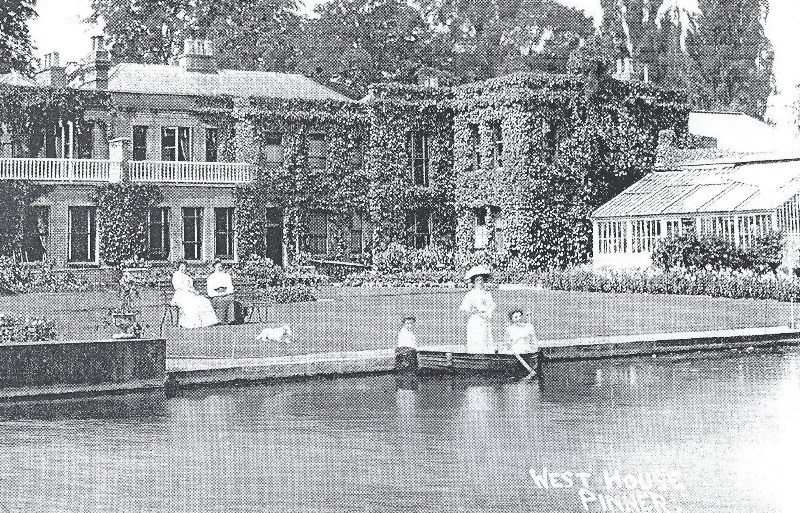 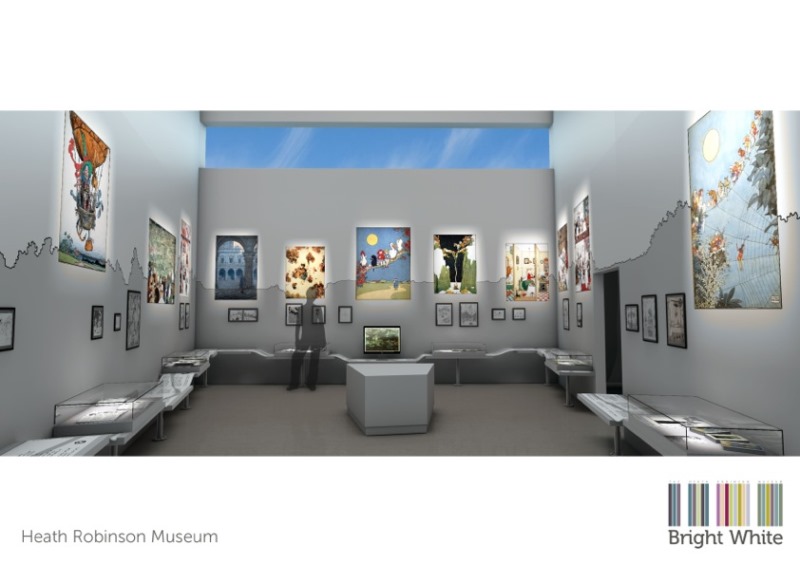 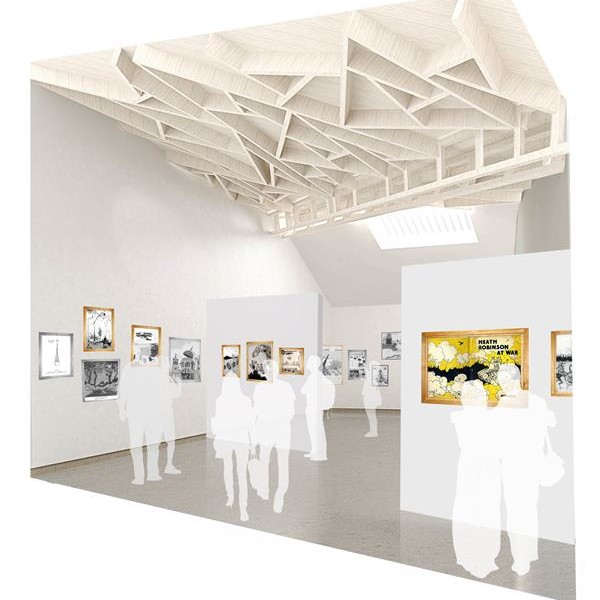 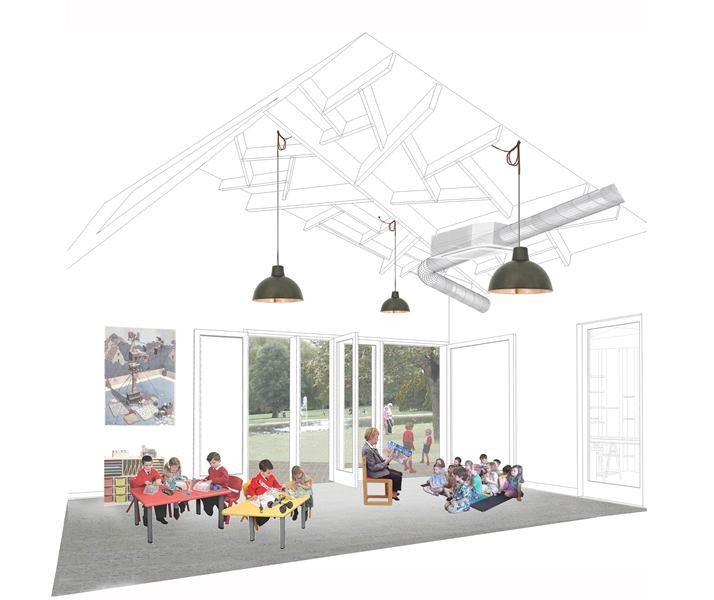 The old West House, once the home of Horatio Nelson and Lady Hamilton’s grandson, was a private house until the 1930s. The people of Pinner raised £7,800 after the Second World War to buy the house and land to turn it into a memorial for the fallen. The property was then given to the Council to hold in trust for the community and was a community hub until 1990 when the Council, because they couldn’t maintain it, closed it. Regrettably, vandals then smashed parts of the building and it was left neglected for a number of years.

“The Pinner Association were determined to save the house and, with the Council and others formed a working party to find a purpose for the house,” says Wells. “By chance the William Heath Robinson Trust contacted us in 1998; they had a collection with nowhere to show it and we had a house and were looking for an appropriate use.” Together they formed The West House and Heath Robinson Museum Trust and started to fundraise to restore West House. “We raised £1.5 million and the restored West House, complete with a small gallery for original works by Heath Robinson was opened by Michael Rosen in 2010.”

Following this the West House and Heath Robinson Museum Trust realised a larger gallery was needed and the Trustees put in a successful bid for Heritage Lottery Funding to build a gallery alongside West House.

The museum plans were boosted last year when the William Heath Robinson Trust was able to purchase a large private collection of Heath Robinson’s original artwork. The collection had been the property of Simon Heneage, a publisher and a founder of the Cartoon Museum, who died in 2011. It comprises 410 drawings and paintings and includes many of his most well-known First and Second World War cartoons. At the heart of the collection are 67 published full-page humorous drawings for magazines. Of these, about half relate to the two World Wars and many contain his popular “contraptions”.

There is also an almost complete set of drawings made for How to build a new World, a book published in 1941 which reflects the hopes and aspirations of Britain in the second year of the Second World War. The Heneage collection also includes a large number of rough sketches that Heath Robinson made to show editors new ideas for humorous subjects.

The asking price for the collection was £300,000 which was not negotiable. The immediate problem was the limited funds of the William Heath Robinson Trust and they had to raise the money in ways than would not conflict with funding for the new Museum. With the strong content of the material relating to the two World Wars the Trust received a £250,000 grant from the National Heritage Memorial Fund (NHMF) and £50,000 from the ArtFund. The purchase was completed and the pictures added to the Trust’s collection at the end of March this year.

Carole Souter, Chief Executive of NHMF, said: “These fantastically wry cartoons represent British humor at its best. With the new museum opening in 2016 and the country marking the centenary of the First World War, there’s a renewed interest in Heath Robinson’s work and we felt that it was important to keep this collection together for the nation to rediscover and enjoy.” The William Heath Robinson Trust also received a small grant from the Association of Independent Museums to begin the necessary conservation. A selection of works from the collection are currently on display at West House.

In the long-term the acquisition of the Heneage collection will greatly enhance the William Heath Robinson Trust’s ability to present a rich and varied range of exhibitions in the new museum and will reduce the costs of putting on those exhibitions. For example, the first exhibition in the new Heath Robinson Museum, planned to coincide with the 100th anniversary of the battle of the Somme from July 2016, will be “Heath Robinson at War” for which the current Trust collection would have had to be supplemented with a large number of printed items and loans.

As work commences on the new museum The West House & Heath Robinson Museum Trust is making further approaches to outside Trusts and Foundations and is seeking commercial sponsorship – particularly for exhibitions and other events – to meet the £140,000 shortfall in its partnership funding and is continuing to encourage individual donations on its website.

Heath Robinson was one of the leading illustrators of his day. Well-known for his drawings of complicated contraptions, the term ‘Heath Robinson’ first entered the language in 1912 as a synonym for ‘absurdly ingenious devices’.

During both the World Wars, his ironic and bizarre depictions of both sides in the conflicts and gentle satire of public figures proved extremely popular.

Numerous artists ranging from Wallace and Gromit creator Nick Park to Olympic Cauldron designer Thomas Heatherwick have cited Robinson as an influence on their own work.

£3.55m to save heritage Weston-super-Mare pier from total collapse