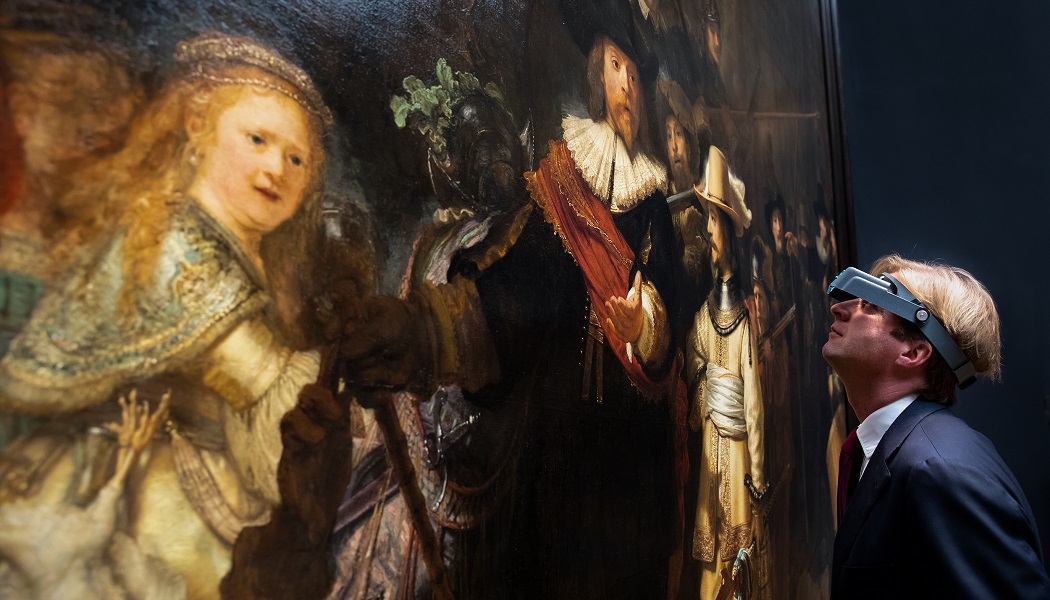 Modern conservation and restoration practices are underpinned by cutting edge technologies. An increasing number of cultural institutions are also leveraging the latest audio-visual and social media innovations to boost engagement with the processes safeguarding priceless artworks and artefacts.

In a sector ever-hungry to reach new audiences, 2019 has seen Notre Dame’s recovery from fire damage stimulate global debate over the role of restoration and the Rijksmuseum turn conservation into a must-watch event.

If anyone was in any doubt about the intricacies, considerations and trials which face a large-scale restoration project then they need look no further than Notre Dame Cathedral.

In the two weeks immediately after April’s fire which ravaged the iconic Parisian site, more than €750 million was pledged for the cathedral’s reconstruction. The fire which destroyed vast swathes of the ecclesiastical structure engendered a global discussion over what arts and culture means to societies. This highlighted the strength of feeling towards globally significant heritage sites; it also led some to question whether a disproportionate amount was donated given some of the other pressing issues facing modern societies. 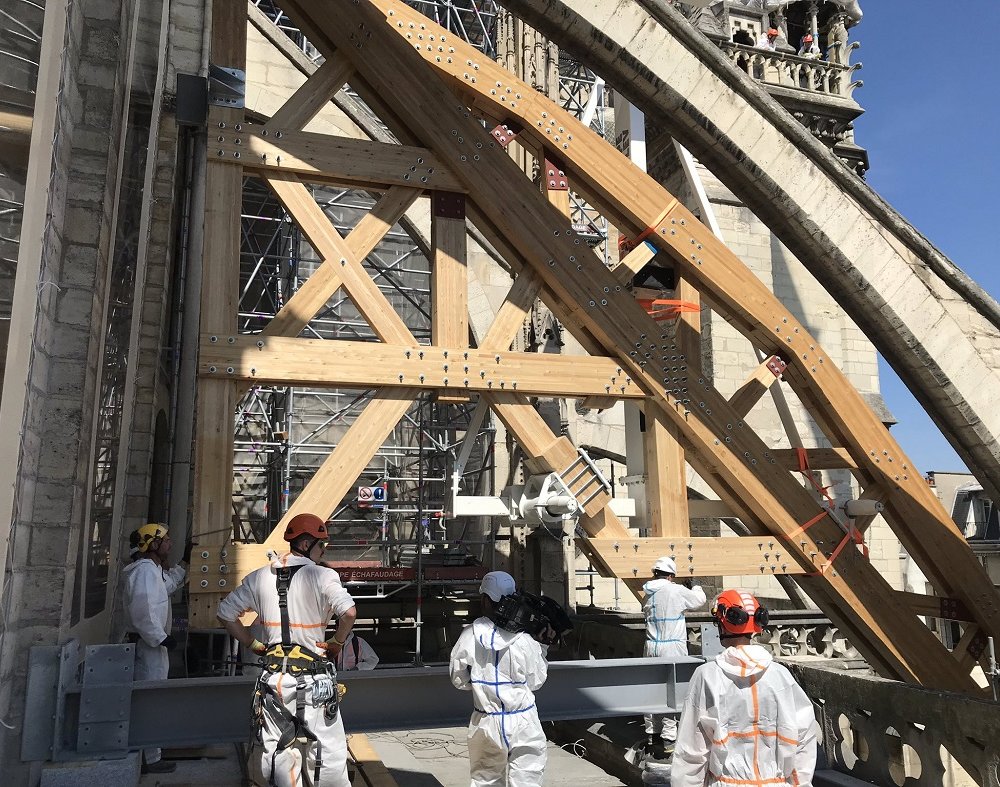 It has also posed the question of quite how the historic building can be successfully restored. The answer to this seems to be dependent on any given person’s definition of what makes a restoration successful.

Debate rages over whether restoration should aim to return the building to its prior state or utilise some creative license and modernise the damaged elements. This division of opinion continues to engulf the Notre Dame project, and threatens to further delay proceedings.

Feelings have run so strong about this that tempers even flared in a recent public meeting when President Macron’s special representative for the cathedral’s reconstruction told the project’s chief architect to “shut his mouth” and allow the assembled team to make conclusive design choices.

While consensus would help the scheme progress more speedily, the differences in opinions from parties around the globe demonstrate that passion for heritage – both within the sector and the wider public – remains undimmed. Attracting new audiences, particularly those with fervent opinions, to engage with the global heritage sector can only be a positive for all historic sites concerned with dwindling visitor numbers. 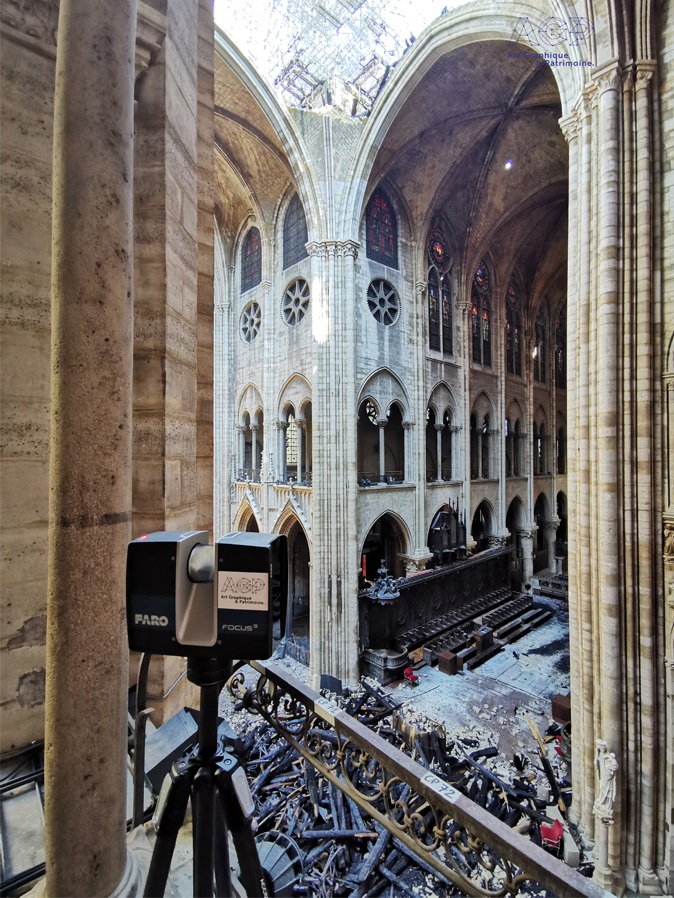 Scans were taken throughout Notre Dame, both before and after the blaze © Art Graphique et Patrimoine

The rebuild is expected by experts to take over a decade; a timeframe which doesn’t sit well with Macron who is pushing for its reopening in time for the 2024 Paris Olympics. The president is believed to favour a modern interpretation – with some claiming this is less motivated by the best interests of the site than his wishes to leave his stamp on the world famous building.

Regardless of the final style selected, one of the key players in the project will be 3D digitisation and modelling specialist Art Graphique et Patrimoine. This may not have been a role the company expected, however. In the years before the blaze AGP has been scanning the Notre Dame site to build 3D renderings of every aspect of the medieval construction – work that was conducted with no intention of informing future reconstruction. 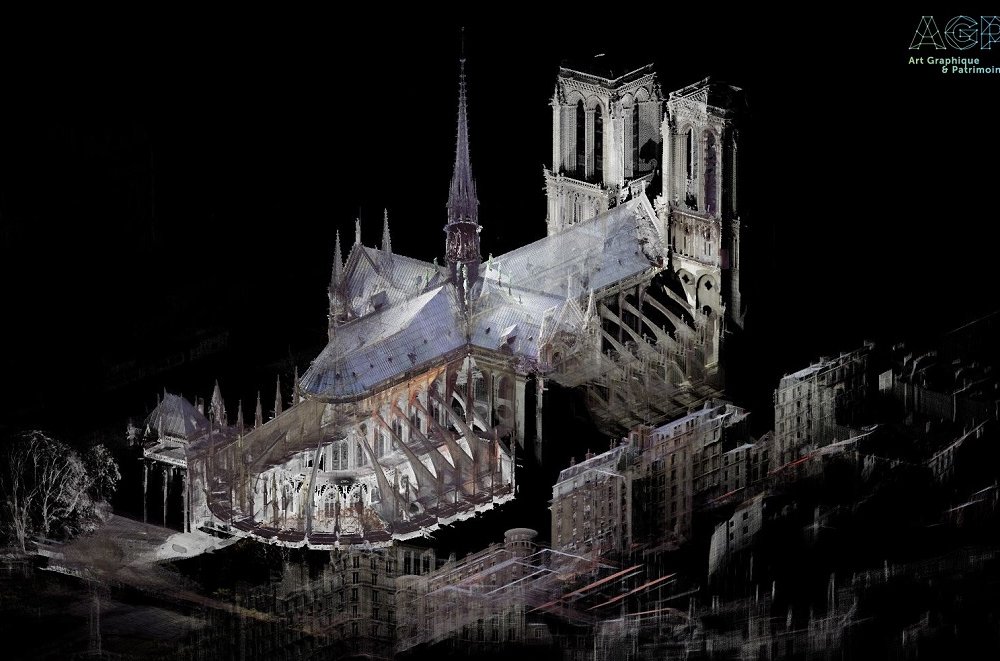 The level of detail in AGP’s Notre Dame data set is staggering. Around 50 billion individual points have been digitally plotted on 3D maps of the cathedral, meaning that there are one or two points for every square millimetre of the vast structure. These resources have been invaluable to charting the extent of damage done.

Without these digital images there would have been no hope of restoring the damaged areas to anything like an accurate replication.

While repairs to the damaged masonry are painstakingly pondered, one conservation effort that was undertaken speedily after the inferno was that of an early 19th century tapestry which had been housed in the cathedral. The 25 metre rug had only been on display twice over the previous thirty years, and was donated to the site by King Louis-Philippe of France in 1841.

When firefighters emerged from the blaze dragging the water-logged and blackened tapestry it was feared that it may be beyond repair, but a wind tunnel was used to dry the fabric prior to freezing it to remove any microorganisms that could have inflicted subsequent damage. For some artefacts the fire has merely added another chapter to its history at the world-famous cathedral. The more people discussing these stories, the brighter the sector’s future.

The summer of 2019 saw conservation transition from a behind-the-scenes undertaking into a must-see global event. While many projects allow visitors a peek at proceedings, Rijksmuseum’s ‘Operation Nightwatch’ was established to give international audiences an unparalleled insight into one of Rembrandt’s most iconic works, The Night Watch. 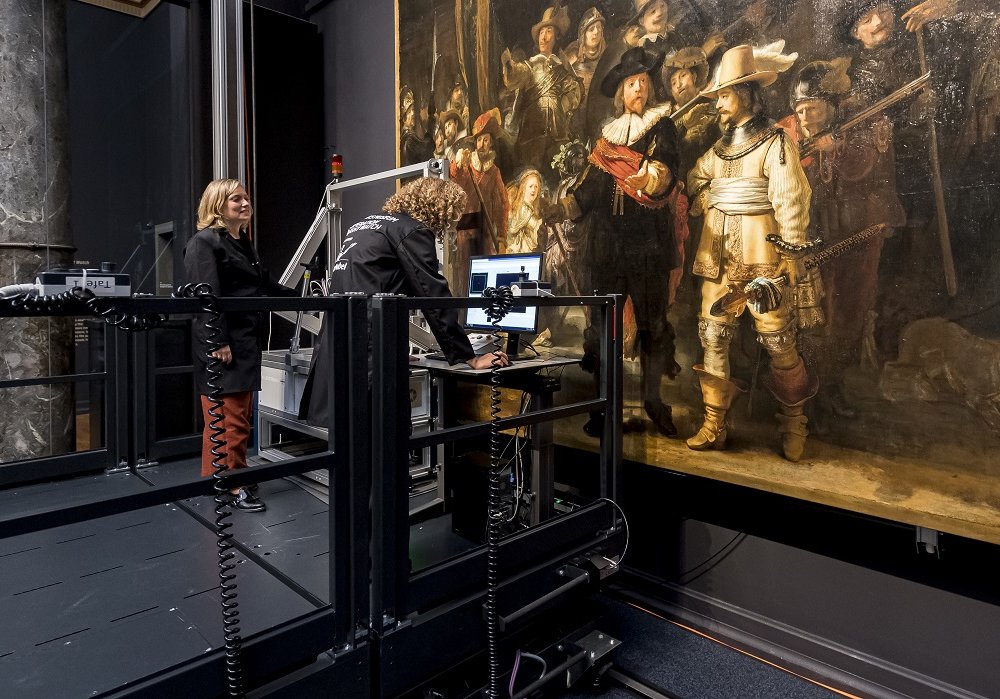 Operation Nightwatch gets under way © Rijksmuseum

In situ at the Rijksmuseum The Night Watch is ordinarily seen by around two million visitors annually; figures which the huge interest in the livestream project will help eclipse for 2019.

Located within an ultra-transparent glass chamber designed by the French architect Jean Michel Wilmotte during the conservation, the artwork was seen by thousands of visitors in person and many more online.

The project opened the eyes of worldwide internet audiences to Rembrandt’s materials of choice and painting technique. The impact of previous treatments and later interventions on his work, along with the ageing, degradation and future of the painting were also revealed by the investigative process.

Expertise in historical and archival art research, scientific and technical research, computer science and artificial intelligence were all pooled on the project. Over 20 Rijksmuseum scientists, conservators, curators and photographers collaborated with the Dutch Cultural Heritage Agency, Delft University of Technology, University of Amsterdam, Amsterdam University Medical Centre, University of Antwerp, National Gallery of Art in Washington D.C. and several other institutions. This was no small undertaking. 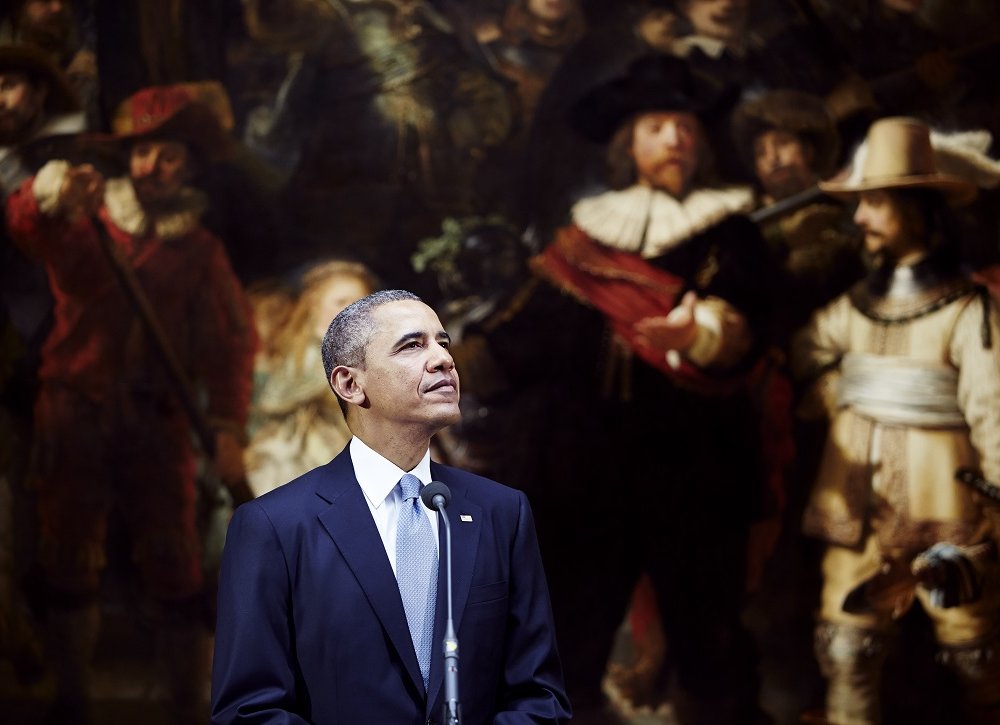 The Night Watch was the subject of millimetre-by-millimetre macro X-ray fluorescence scans, conducted by an instrument that uses X-rays to analyse the constituent chemical elements in the paint. These scans and the subsequent distribution maps revealed which pigments were used and the painting processes employed by Rembrandt. 56 scans, each one of which took 24 hours, were required to scan the painting’s entire surface.

Concurrently, 12,500 high resolution photographs were taken, ranging from 180 to 5 micrometres. This made the piece the largest painting ever photographed in such detail. Details such as pigment particles – normally invisible to the naked eye – were seen for the very first time on the 379.5cm by 454.5cm canvas.

Restoration work being open to the public is far from new at the Rijksmuseum. Things were, however, done rather differently in the 20th century. 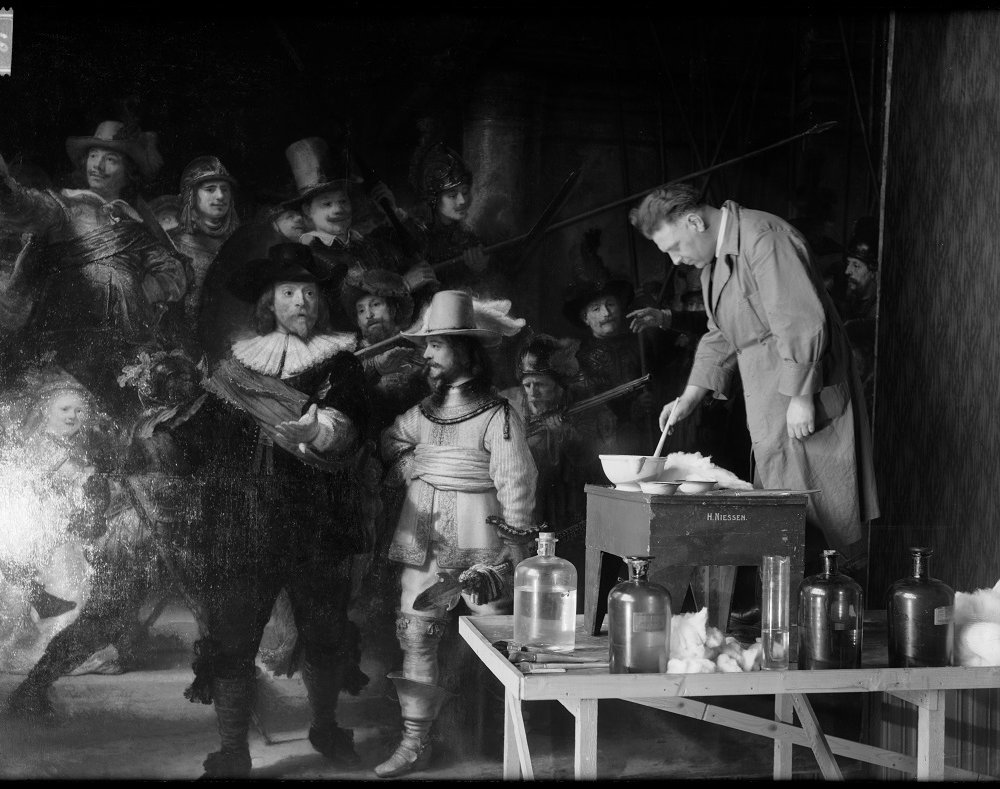 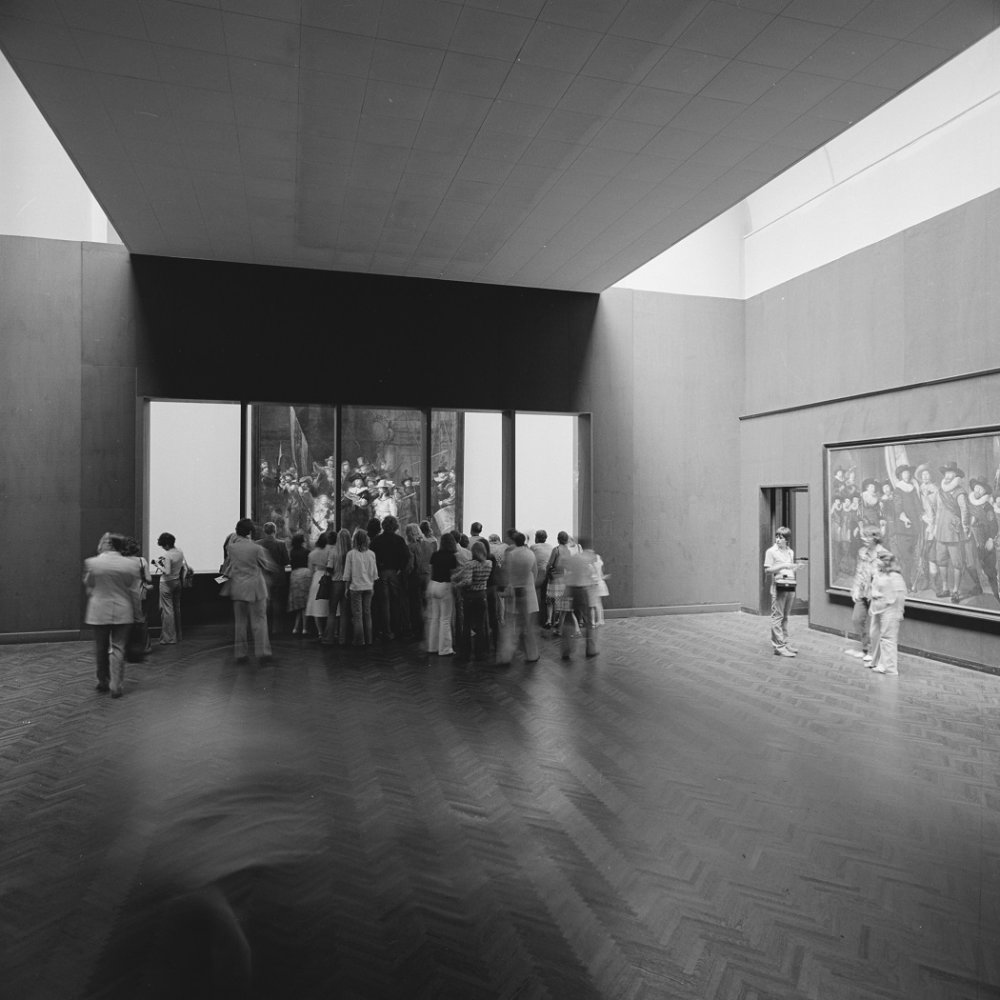 Public engagement with such a ground-breaking endeavour was understandably high. One livestream clocked up over 21,000 views on YouTube – a live audience reach that organisers of a similar 1970s  restoration initiative (pictured above) could never have comprehended. The internet can undoubtedly be a huge asset to museums in expanding reach, if leveraged in a savvy way.

In 2017, London School of Economics research estimated there were 35.6 million UK visitors to YouTube each month; a figure that will in all likelihood have now increased. Current figures from the U.S. claim 81% of American 15-25 year olds use the site, and it is often cited as younger demographics’ viewing destination rather than television.

YouTube offers the enticing prospect of attracting new, younger audiences for museums and heritage sites. If this can be achieved all that remains is the small matter of devising more and more ways to monetise increased online interest.

Have you been working on a restoration or conservation project that the industry deserves to know about? Let us know! You may well find yourself walking off stage with the Restoration or Conservation Project of the Year prize at the Museums + Heritage Awards 2020 in May.