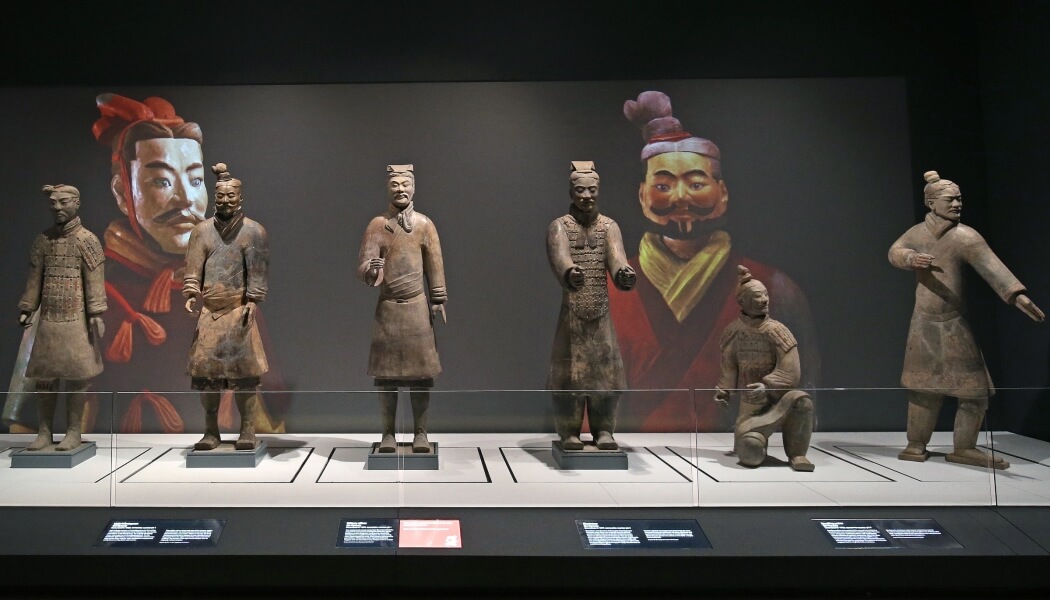 Terracotta Warriors at World Museum uses five elements of AV and AR to bring the statues and artefacts to life. Photograph by Gareth Jones
Share

When it was announced in December 2016 that part of the Terracotta Warriors collection would be exhibited at World Museum Liverpool, it led to one of the largest uses of audio visual (AV) and augmented reality (AR) in the organisation’s history

Sima Qian, Records of the Grand Historian, describing the building of the First Emperor’s mausoleum

The scale and significance of the Terracotta Warriors’ discovery in 1974 has meant that it attracts a huge amount of attention when part of it goes on tour and it is expected that China’s First Emperor and the Terracotta Warriors at Liverpool’s World Museum will attract 450,000 visitors from its opening in February until it closes in October.

However, by themselves the ten Terracotta Warriors and more than 180 artefacts from museums across Shaanxi Province in North West China would paint a very conventional display and it was decided in January 2017, as the storyline for the exhibition was being mapped out, that a more immersive approach would be taken. 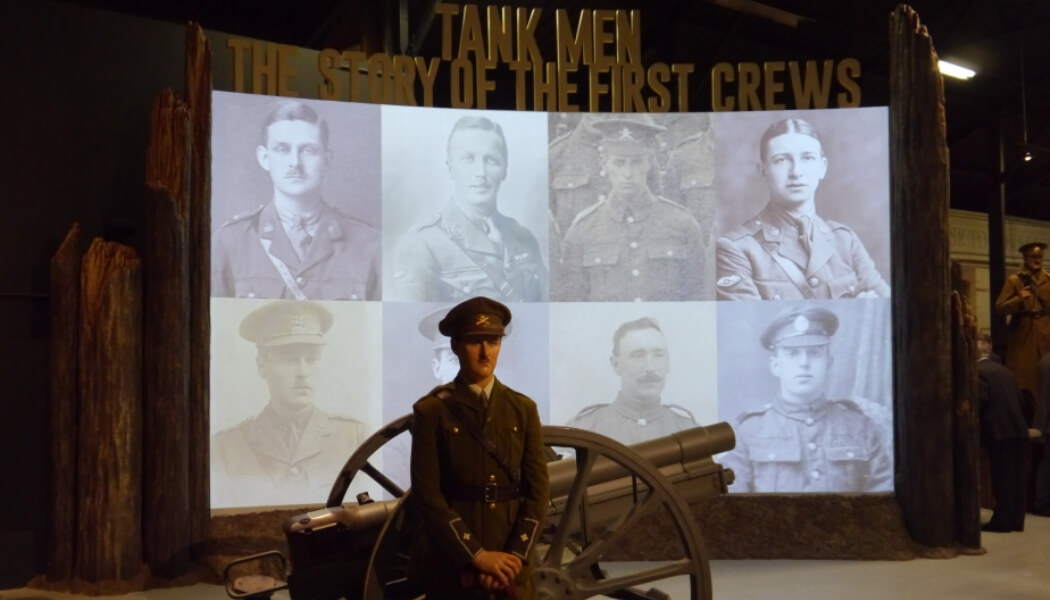 “What we wanted to do was create one of the most creative and innovative exhibitions we have staged so far and give the Terracotta Warriors a general sense of the wow factor,” says Fiona Philpott, head of exhibitions and design at National Museums Liverpool. “We wanted to create something that was engaging and memorable for visitors. The artefacts are spectacular but they are also very traditional.”

There are five large-scale AV elements to the exhibition, two of which include AR and they form the beginning and end of the story. The exhibition opens up with a dramatic 13m geometric wall that mixes video, animation, graphics and AR to tell the history of China from modern day to ancient times when the First Emperor, Qin Shi Huang (259 BC – 210) unified warring factions to become China’s first emperor.

“So we wanted to bring the world of the Warriors to life,” says Philpott. “And we thought that using new technologies could help us do that. I quite like the idea of telling a story that is 2,000 years old with 21st century technology.” 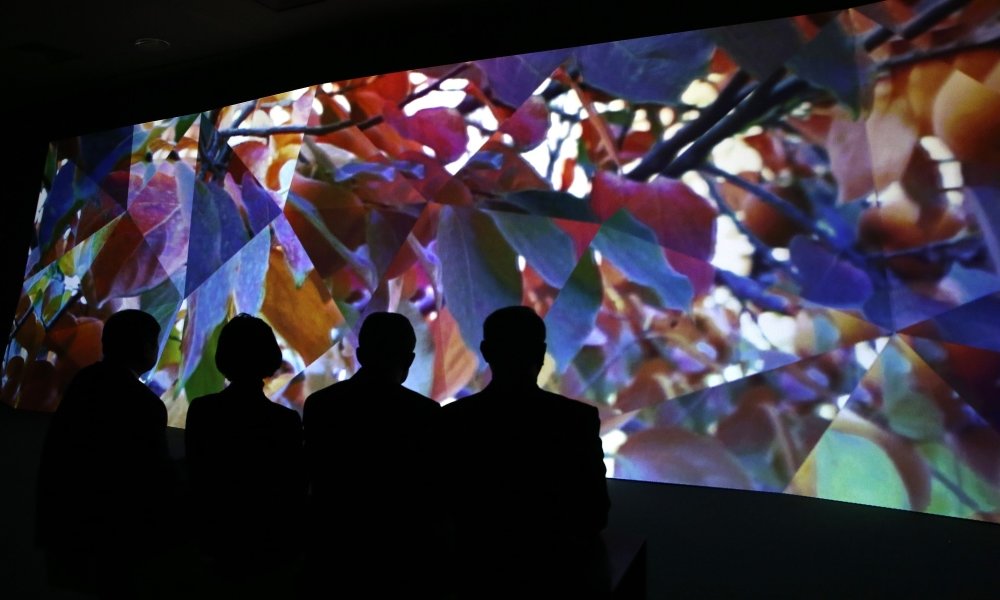 The exhibition opens up with a dramatic 13m geometric wall that mixes video, animation, graphics and AR

When the introductory display has finished the doors to the main gallery open automatically and the visitor is greeted by the spectacular view of the horse breeder and a cavalry horse from the first emperor’s burial site. Visitors are then introduced to the story through three AV displays showing images, video and illustrations all without sound so as not detract from the statues. Here there is an illustration based on Chinese ink drawings that have been transferred to computer and then animated. As visitors move to the stage where the Warriors are situated have a huge screen that contextualises the story. The penultimate AV display covers history spanning one thousand years through three distinct dynasties. This is achieved through images that connect to the burial such as shots of the excavations and shots of the figures in situ in burial pits. 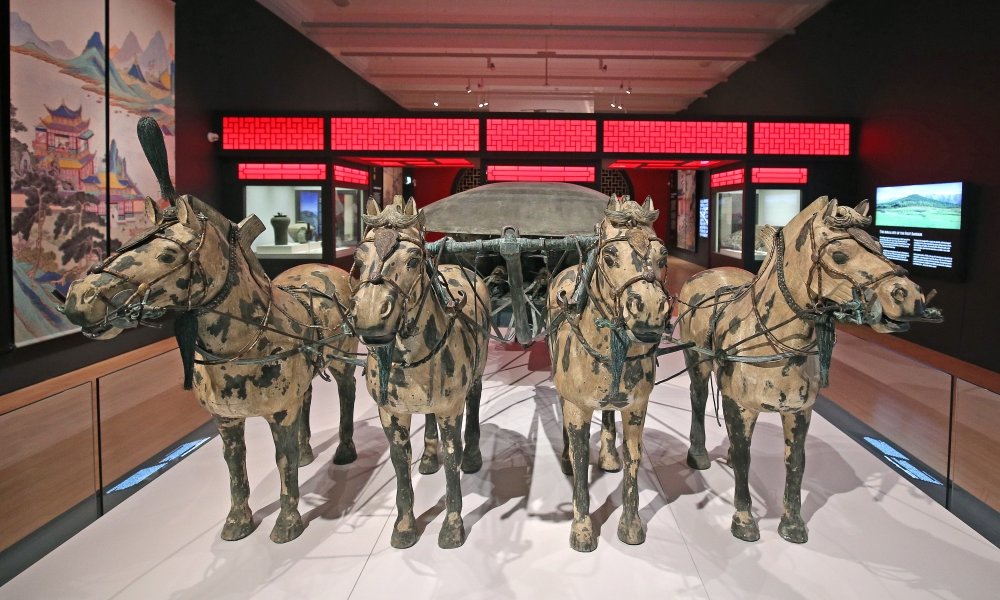 The final piece is the most ambitious element in the entire exhibition, says Philpott, and uses projected AR and VR visualisation. It has immersive sound and a combination of build as well as projection. “This is at the end of the exhibition and is in a space entirely on its own. As visitors leave the exhibition they enter a space where we try and construct the first emperor’s mausoleum. This has never been opened before and we only have a record of it written 100 years after he was buried by the Han historian Sima Qian. So we have taken that historical record and recreated the mausoleum using a degree of artistic license.”

Philpott says the use of AV and VR is about engagement with visitors and the being relevant to the broadest possible audience. She says it was a way of enhancing the museum’s storytelling.

When visitors arrive at the exhibition they are initially transported to China to familiarise them with the sights and sounds of the modern day and them take then back across time to the Shanxi Province and Xi’an where the Terracotta Warriors were discovered.

Creating a virtual Gallery to test the AV

To help with the main gallery AV, the team created a virtual gallery so head of exhibitions and design, Fiona Philpott could stand in it. This enabled her to understand sight lines and see how the gallery projections would work above the cases. She was also able to kneel down on the floor and see what it would be like for children. “It was a fantastic planning tool”, she says.

Originally the museum team planned to have a wholly immersive exhibition but the cost would have been too great, however, the final exhibition still pushed the boundaries of what’s gone before.

She says the team achieved a balance of AV and exhibits and throughout the exhibition journey the AV is interspersed evenly with the display of the artefacts.

One of the challenges the team faced was trying to explain the story of the warring states when China was divided into 148 independent kingdoms competing for power over several hundred years. Philpott say that as the artefacts are burial items they don’t necessarily relate to that time of warfare, so the team wanted to create more of an immersive feel to that part of the gallery and story. To do this they commissioned an illustration that contextualises the information to that period. “We have two armies that are moving toward each other on the battlefield with Chinese music that gives atmosphere and is appropriate to the scene. It is based on ink drawings, transferred to computer and then animated.”

For the final AV element in the main gallery the team wanted to give a sense of the thousands of figures that were discovered in the First Emperor’s burial chamber. For this they used back projection to allow them to show wide angled shots of the pits the Warriors were found in, which gives the visitor a sense of the magnitude of the site, and also enabled them to hone in on the detail of the some of the figures.

“We also used it as a device to allow us to explain to visitors that the warriors were originally painted in bright colours. We were conscious that we didn’t want the images to detract from the figures themselves. The imagery is very slow moving and at times it goes blank for visitors to take in the figures. There is no sound there, it is just video imagery.” 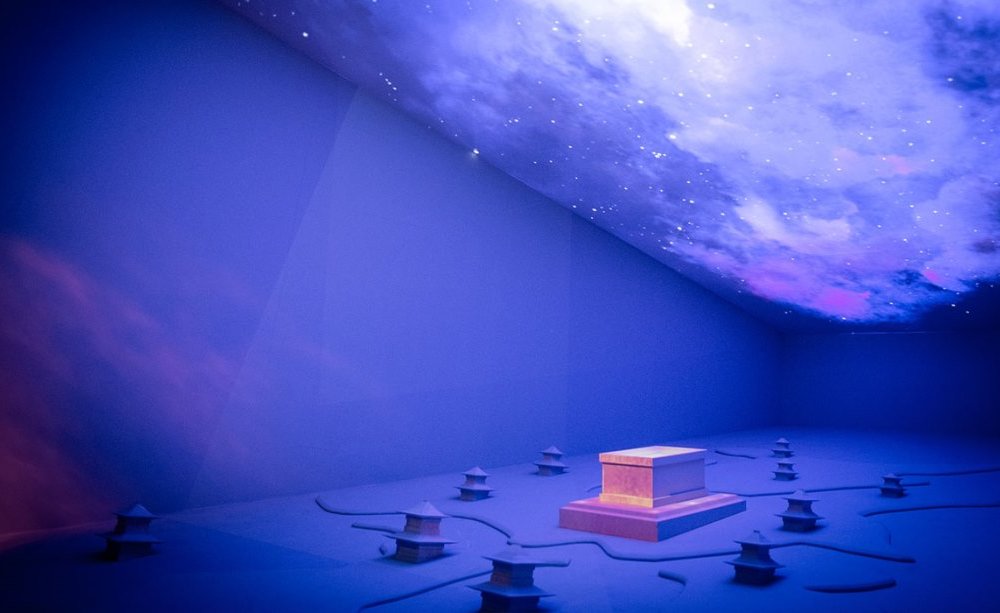 The First Emperor's mausoleum has been recreated by Draw & Code using AV and AR. Photo courtesy of Draw & Code

For the exhibition’s grand finale the team created a false perspectives of the burial chamber by building a set with wooden models and film projection. The presentation opens with smoke and music and as the smoke clears a gold and gleaming space is revealed, which has rivers of mercury flowing through the floor and hundreds of little palaces, Constellations adorn the sky above and as the visitor is soaking up the atmosphere a bird flies through the space and triggers a booby trap and arrow shoot at the visitors as if they in the midst of a great battle.

“It’s the most innovative part of the exhibition and it’s not what you would normally expect to see in a museum environment. It provides a sense of magic and spectacle. We were very keen that people had something uplifting to go away with. “

Philpott says when it comes to historic material that derives from cultures that people are unfamiliar it is always important that museums provide contextual information to enhance the interpretation. She says that AV can set the scene and helps to explain objects in more detail.

“We were nervous about using audio visual with the warriors as we didn’t want to overwhelm the experience,” she says. “I think as a tool for visitor engagement this exhibition has shown us what the potential is, certainly combined with AR and VR. Creating new experiences for visitors is really exciting.”

She says the scope for using new technologies in museums is massive, and National Museums Liverpool is really excited to have teamed up companies that make engaging exhibitions possible. She says the team looks forward to continuing the conversations and finding future opportunities to explore emerging technology and how it can be used to support the museums’ exhibitions.

“As an organisation we are beginning to have conversations about how our digital strategy and digital interpretation, not only in terms of exhibitions and galleries but also the collections and making them more accessible to our audience. And in terms of back of house operations as well and how can technology support what we do and make us more efficient and effective.”