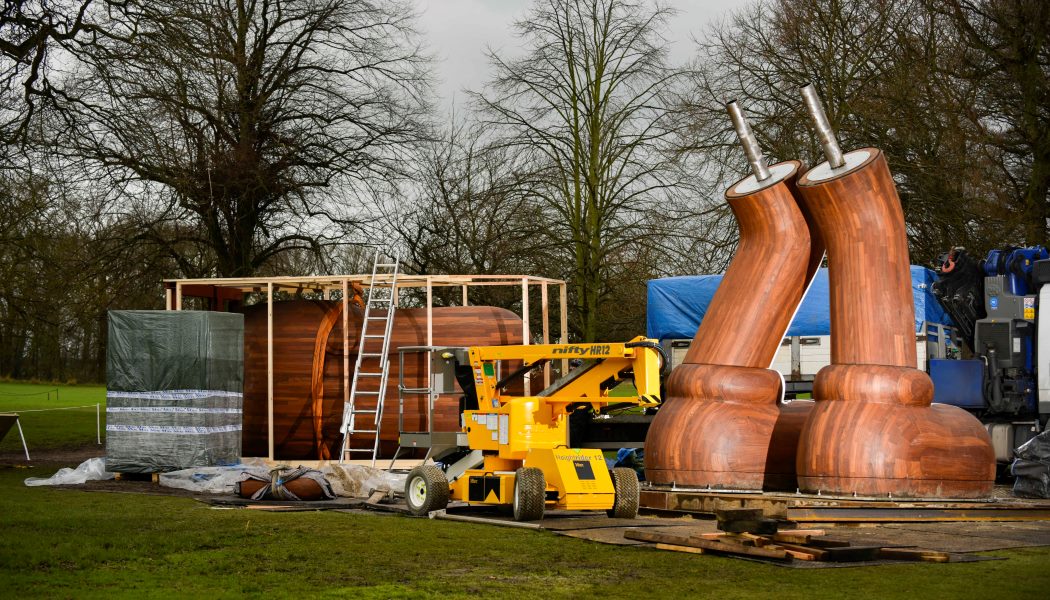 Yorkshire Sculpture Park is currently showcasing the first UK museum exhibition of American artist KAWS, which includes six outdoor sculptures up to 10m installed in inclement January weather. M+H Advisor looks at how the show was put together and how it continues a long line of sculpture enquiry from Hepworth to Gormley

The ambitious KAWS exhibition, which opened at the Yorkshire Sculpture Park (YSP) last weekend, was put together in an incredible six months’ time frame and includes both indoor and outdoor installations.

The exhibition surveys sculptures made over the last ten years by the Brooklyn-based artist and represent KAWS’ lexicon of characters – families that he’s been creating for some 20 years, including COMPANION, CHUM, and BENDY, all with the KAWS trademark head of soft skull and crossbones and crossed out eyes.

Plans for the exhibition got into full swing in August when YSP’s registrar, Nathalie Levi established communication with teams in Belgium, Los Angeles, Paris and New York to organise crating and transport.

“This was followed by making outdoor siting and pouring tonnes of concrete a month ahead of installation, organising hundreds of metres of trackway, a couple of cranes, a pneumatic glazing lifter, three teams of highly skilled technicians, and non-stop creative problem solving,” says Clare Lilley Director of Programme, Yorkshire Sculpture Park. “The six reinforced concrete and oak-edged foundations beneath each outdoor sculpture were skilfully dug-in and then landscaped – all in wet weather.”

Lilley says that mounting an exhibition of this scale was always going to have its challenges, not least installing six large-scale sculptures in the open air, in January. However, YSP has its own highly experienced technical and estates teams who work on the installation of all its exhibitions, and the ten-metre-high SMALL LIE was transported and installed by its long-standing provider, Mtec. YSP were also aided by specialist handlers, Martinspeed in the US and The Galerie Mourmans, in Belgium, who produce KAWS’ larger-scale works and also installed a number of the open-air works.

“Wet and muddy ground conditions made it very difficult for cranes and lorries to navigate the site, resulting in large amounts of tracking to minimise damage to the ground,” she says. “The installation teams also had to brave working through wind, rain, snow and ice, sometimes climbing up inside the sculptures to secure torsos and arms.”

Outdoors is a group of six sculptures in natural and black-stained afromosia wood, measuring between three and ten metres in height; the stunning GOOD INTENTIONS was also made especially for the Yorkshire show. “YSP is unique in being able to offer the opportunity for KAWS’ sculptures to be seen in such an intense group and there’s a physical and psychological dialogue going on between them as they emerge from this expansive piece of parkland.” 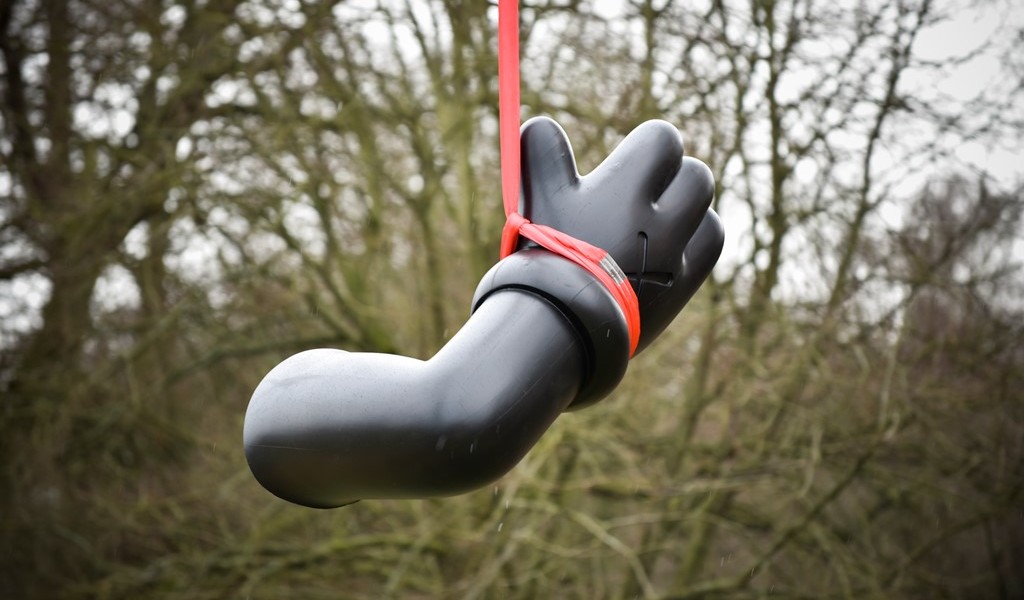 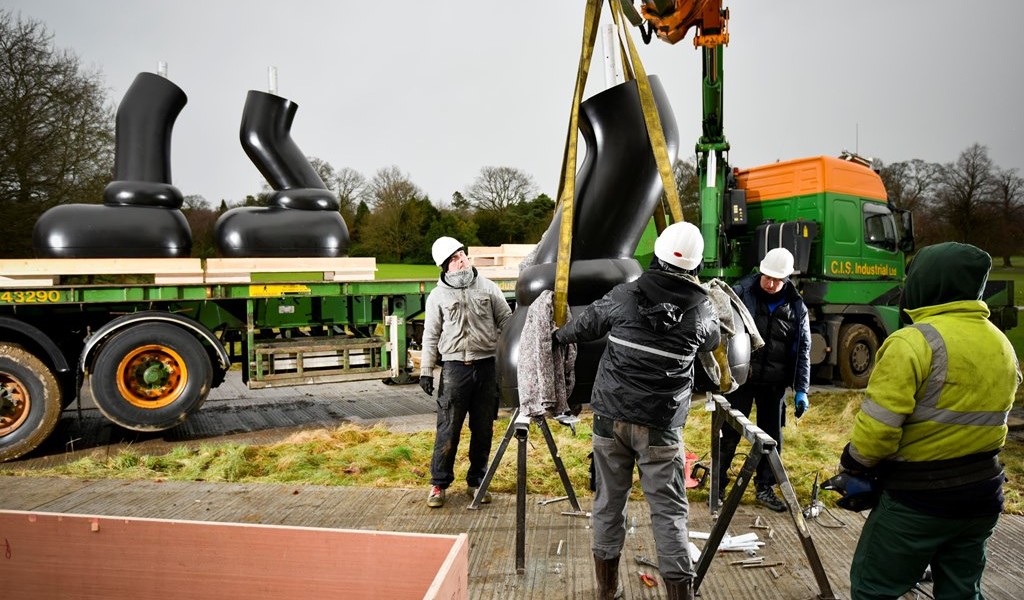 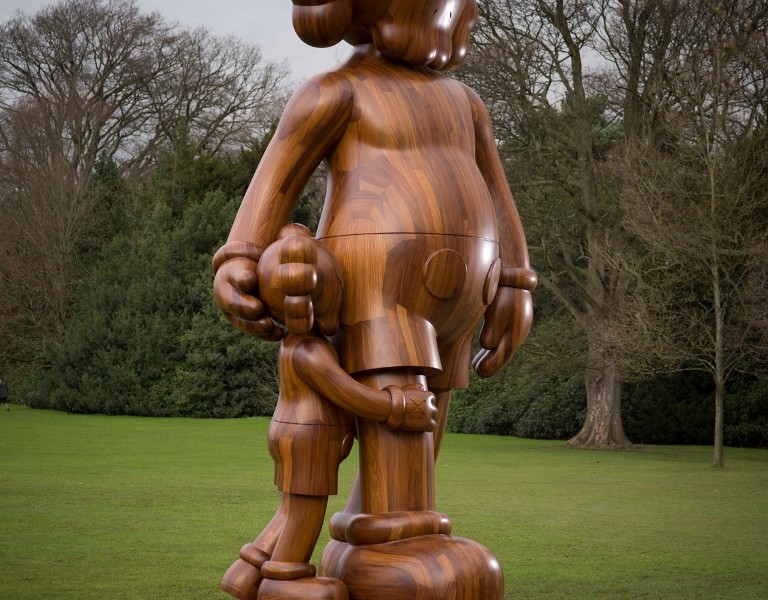 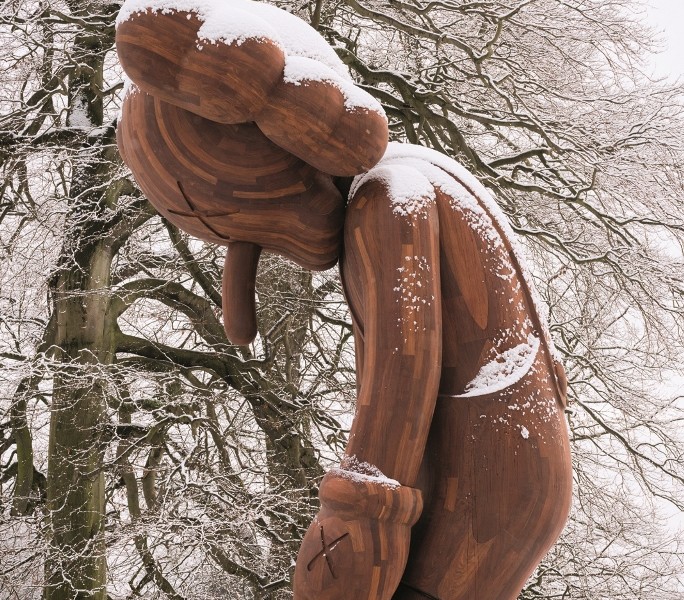 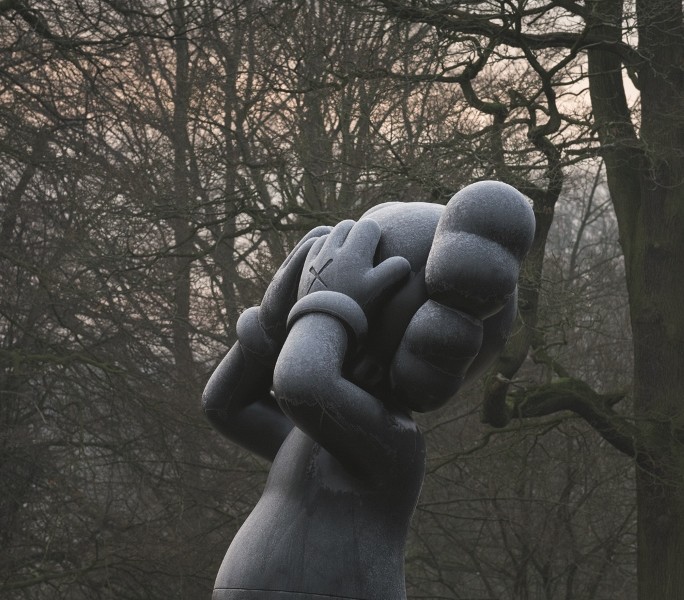 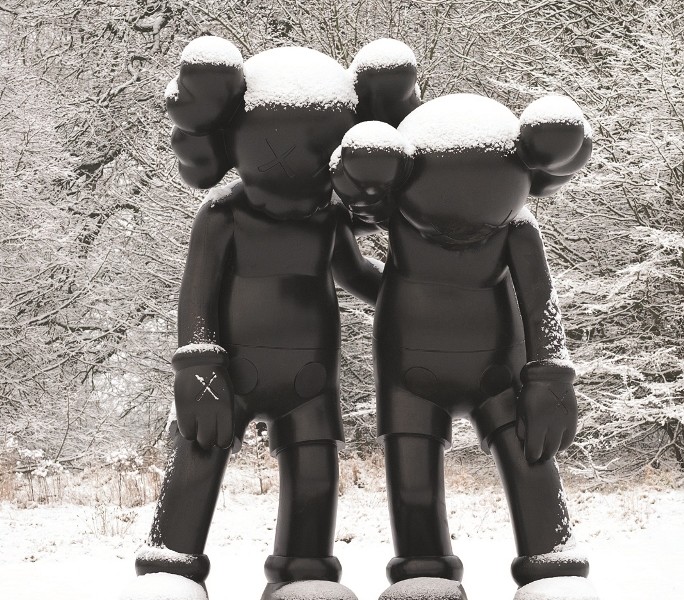 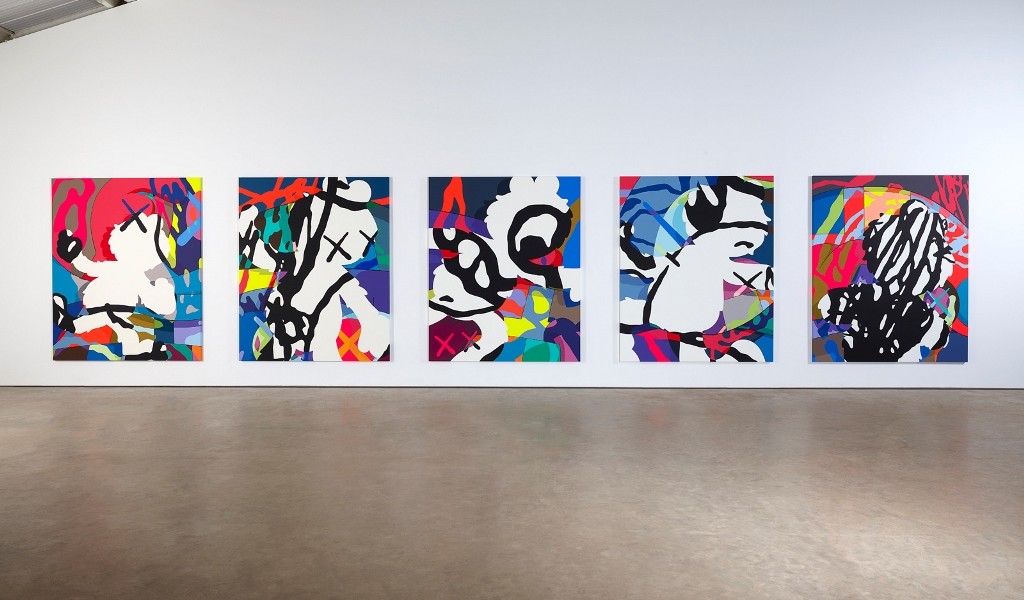 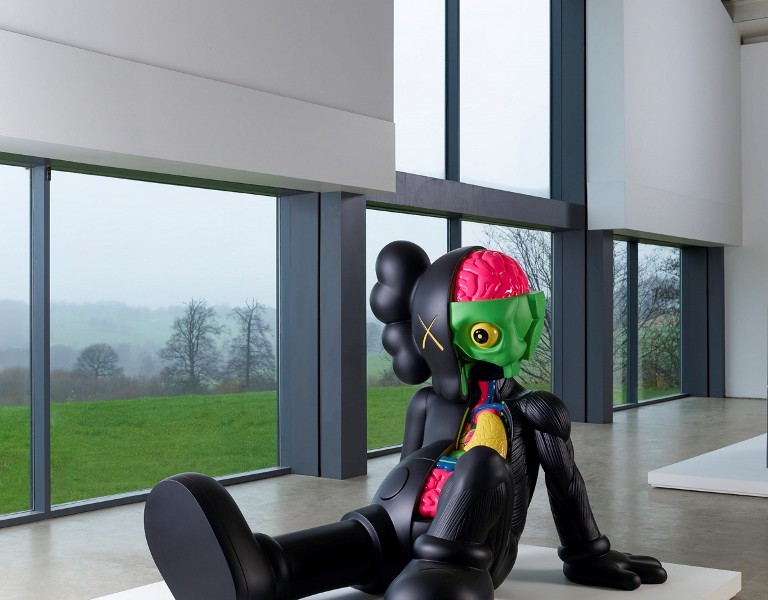 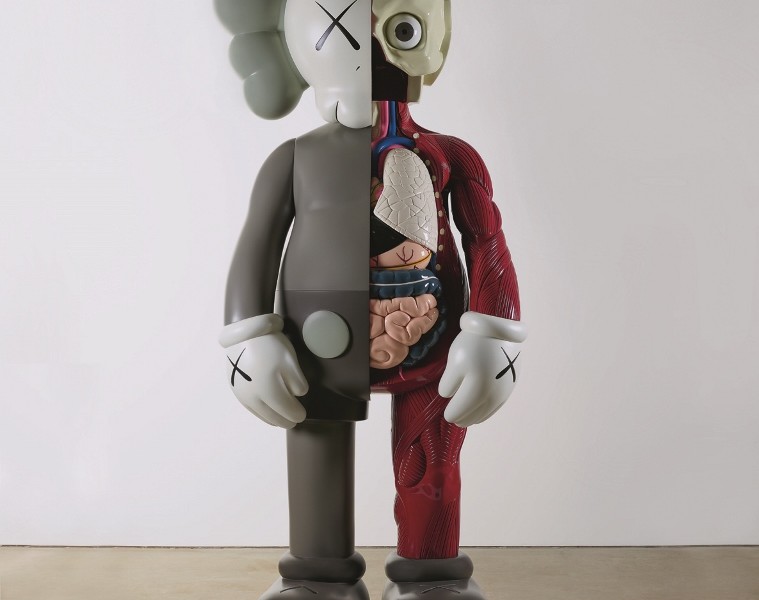 The installation of SMALL LIE – the largest of the sculptures began at the start of the year and took around a week to install. Prior to that foundations were prepared and the surrounding area landscaped, which meant all together the installation indoors and outdoors took four weeks.

The Yorkshire Sculpture Park was established in 1977 and KAWS’ work at YSP extends a long line of sculptural enquiry that ranges from Mirò, Moore, Hepworth and Frink to LeWitt, Gormley, Opie and Ai Weiwei. “Like those artists, his work reflects the time and environment in which he lives, making his form of expression very much his own,” says Lilley. “Actually, in terms of responding to popular culture, there is a shared interest with Eduardo Paolozzi’s aluminium sculptures, and like Eduardo, KAWS is successfully experimenting with material and colour. I can also imagine KAWS and Miró having robust conversations about making, material, scale, subject and life – they’d have a lot in common.”

KAWS’ practice includes painting, sculpture, printmaking and design and there is also an exhibition in the park’s Longside Gallery of commanding sculptures in bronze, fibreglass, aluminium and wood alongside large, bright canvases rendered in acrylic paint – some created especially for the exhibition.

Lilley says she was familiar with KAWS painting before she discovered his sculptures when she selected SMALL LIE for Frieze Sculpture Park in October 2014. “I was fascinated and moved by how people responded to the sculpture in Regent’s Park and realised how seriously this artist was engaging with sculpture in the public realm,” she says. “That’s when the conversation first started about making an exhibition at YSP. KAWS made his first visit in May 2015 though we didn’t properly select the show until I visited him in New York in July last year – so all pretty rapid for such an ambitious project.”

The earliest sculpture in the exhibition is OriginalFake COMPANION, which for Lilley is an essential place to begin, because that work marked the beginning of KAWS making full size sculpture; he created it for his Tokyo store in 2006. “It’s an iconic work that marks a shift in his practice and this is the first time it’s been shown outside of Tokyo,” she says. “KAWS has also made five incredible canvases for Longside Gallery, called SURVIVAL MACHINE. They introduce a new character into his vocabulary and for the first time combine monochrome and colour painting. He’s also made an utterly beautiful drawing in space-cum-sculpture, called NEW HOME, in layers of acrylic and corian.”

Set in the countryside of West Bretton the YSP is surrounded by trees, green fields, hedgerows and rolling hills and for almost forty years has has worked to attract and sustain a very diverse audience, to develop a place which offers astonishing ideas and experiences and in 2014 it won the Art Fund Museum of the Year prize.

“We wanted to work with KAWS because he’s such an exciting artist and his interest in the public realm is self-evident,” says Lilley. “We’ve done that by making projects with some of the world’s best artists, particularly those who share our desire to communicate, and KAWS does that in spades. All audiences, and especially those who are younger, are responding extremely well to the exhibition and I’m sure more will be introduced to YSP through KAWS.”

KAWS runs at the Yorkshire Sculpture Park until 12 June 2016.