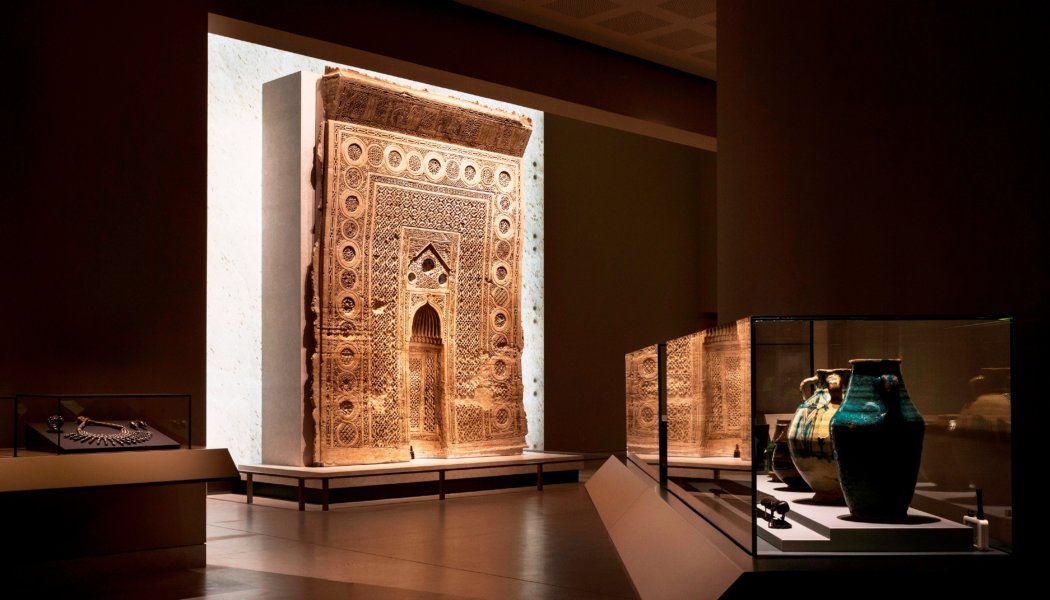 To LED or not to LED? Sutton Vane Associates light up the National Museum of Oman

Sutton Vane Associates were commissioned in 2006 to light a hugely important project to establish a national museum in Oman, which opened last summer, and half way through the decade-long projct the team had to make a monumental decision to keep up with changing lighting technology

The National Museuum of Oman in the Gulf state’s capital, Muscat covers covers 13,700 sq metres and includes 14 galleries. Exhibitions include The Land and the People Gallery, as well as galleries devoted to maritime history, Oman and the World as well as a gallery dedicated solely to temporary exhibitions.

Sutton Vane Associates was commissioned to light everything from the  galleries to education areas, snack bars, lecture theatres, offices, conservation areas and the exterior of the building as well as the surrounding landscape and parking. 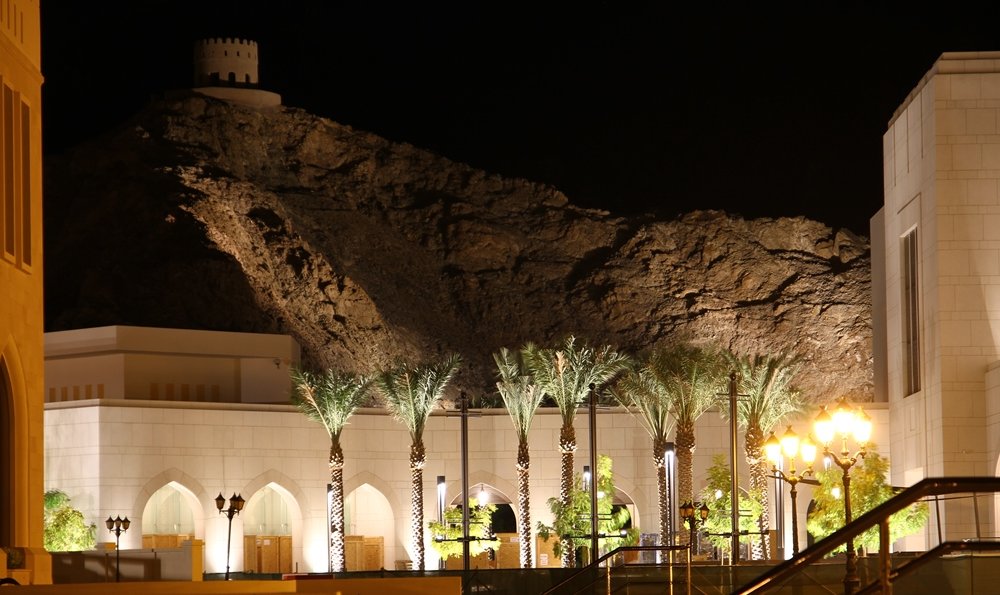 The National Museum of Oman is shadowed by the Al Hajar mountain range and as well as lighting exterior of the museum, Sutton Vane Associates also lit a path to a fort at the top of the mountain

The London-based lighting designers also designed the lighting of the museum’s special Isolation Room – a large room where new acquisitions are stored and where they can be examined for erosion or pest invasion, which means the lighting had to be suitable for activities such as spraying and gassing.

Behind the museum is Al Hajar Mountain range with an ancient defensive tower at the top. Sutton Vane were also required to light mountain from the tower down to the museum. Visually this smakes the old fort and the new museum look as if they are joined, which the museum believe shows history and continuity. 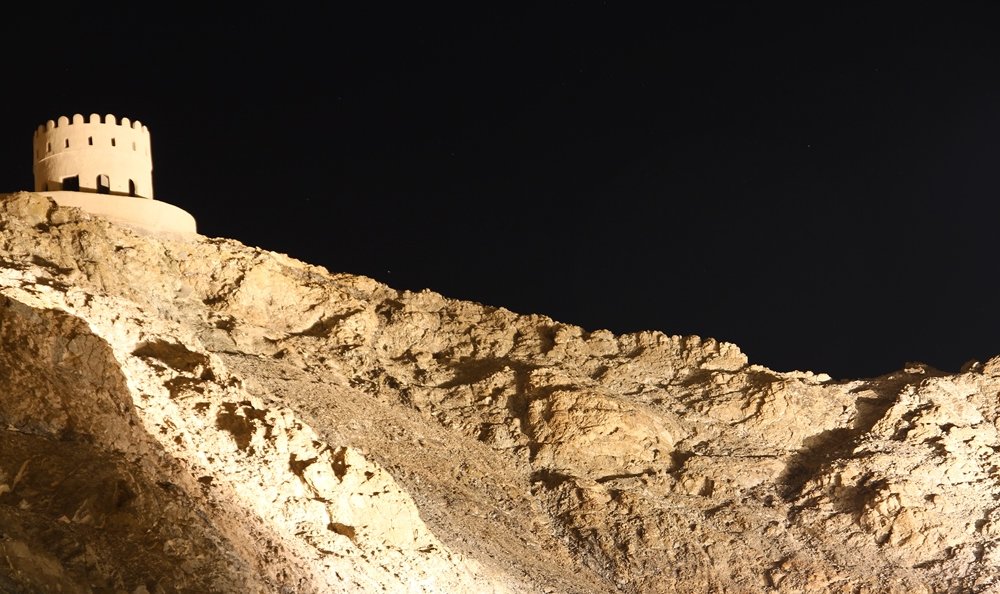 Al Hajar mountain range with a defencive fort at the top

“The lighting equipment is secretly hidden on the roofs at the back of the museum so it cannot be seen by visitors,” says Julie O’Relly, Sutton Vane’s creative director. “The front of the Museum faces a Royal Palace, so the look of the Museum had to fit in with the importance of the neighbourhood. We had many meetings and negotiations with the office of the Royal Court to make sure that they were happy with the exterior lighting of the museum and to ensure that it complied with the desires of the Royal Court. Luckily the design was deemed to be suitable for the Royal Court.”

Early on in the design O’Relly and the team had to deal with with the Omani sunlight to address the fact that people arriving in buses and cars would be walking in sunlight that can be up to 100,000 lux. Once visitors entered the museum they could be looking at delicate items which have to be lit to a maximum of only 50 lux.

This meant that Sutton Vane Associates guided the architect David Wright and the exhibition designer Jasper Jacobs to provide a route where the visitors first walk down an arcade and then pass through three spaces that Sutton Vane had designed with gradually reducing light levels, so that when the visitors reach the first light sensitive artefact, their eyes have had the time to become well adapted. “This means the 50 lux artefacts do not look dim at all. In the first and second of these three spaces the light level adjusts depending on the level of light outside, in the evening the light levels in the first and second spaces are reduced as the visitors are coming in from low levels of light outside and do not have to adapt down from the high levels of daylight.”

The design of the project spanned seven years and originally the project was designed with tungsten halogen lighting, then half way through Mark Sutton Vane, founder of the practice decided to switch to LED as the technology was starting to move into the mainstream

“It would have been embarrasing to open a new national museum with old, inefficient and short life technology lighting,” he says. “Someone would have updated it all soon after the opening, so it was better we updated it to get the kind of lighting we wanted for the project.”

This saw a redesign of the scheme to adapt to high quality LED spotlights. Concord’s Beacon Muse spotlights are used throughout the museum and their flexibility made the aiming and focussing very efficient. “Changing to LED that late in the project was a challenge as by that time the control system and all the electrical infra structure had been installed,” says Sutton Vane. 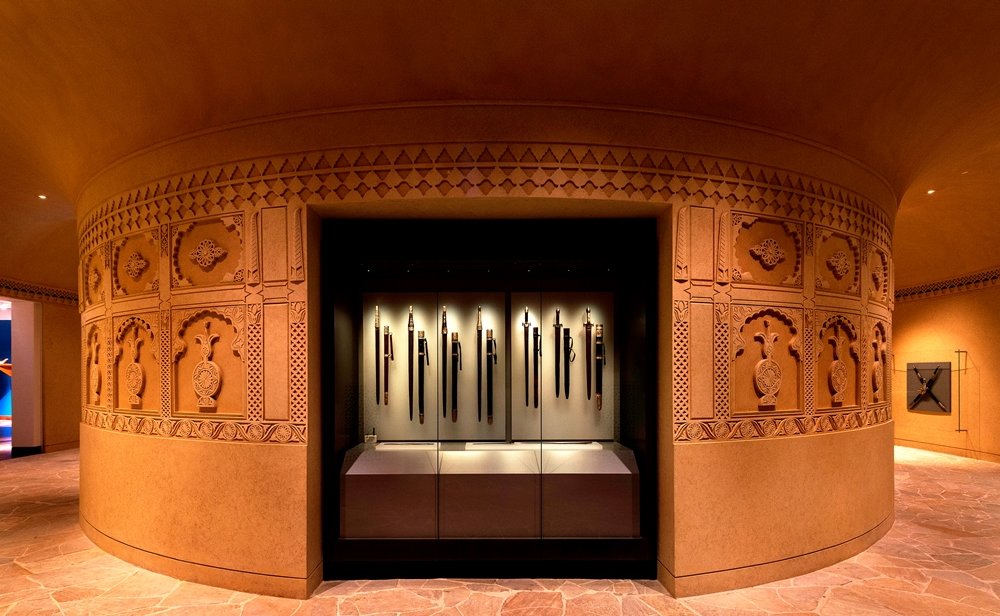 A sword room inside a replica fort

Some of the museum’s highlights include a dramatic circular space based on a historic Omani fort. The walls are all covered in wonderful carved plaster patterns, which Sutton Vane Associates lit to show off the detail. Set into this curving wall are openings for displays of weapons. There is also a large carved doorway, mounted on an enormous area of Alabaster. The alabaster is back lit during the day with daylight to give the feeling of the outside environment where this piece had originally been. At night concealed lights take over and make the alabaster glow.

The Land and the People gallery features some of the tallest museum showcases in the world bulit by case manufacturers Click Netherfield with concealed lighting supplied by UFO.

Also in that gallery the skylights are lit with artificial light which can mimic daylight so the skylights look like daylight. There are also decorative grilles or Mashrabiya which are back lit with different colours of light and are sometimes lit with blending mixtures of reds and blues which adds some unexpected fun into a serious space. 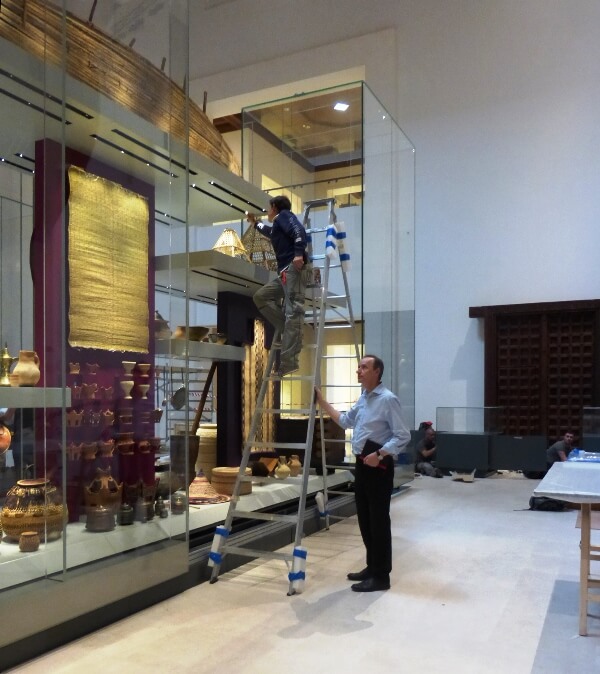 The Land and People gallery, which has some of the world's tallest display cases

“There were many challenges, one of which was to light the conservation workshop where visitors can see preservation in action,” says O’Reilly. “This has to be lit for working, viewing and drama to make the preservation look interesting. An intersting feature of the lighting design is the large number of lanterns based on Omani designs which not only link traditional Omani designs with modern life but also provide functional lighting. Some of the lanterns are huge, many metres tall. There are lanterns outside which deliberately cast shadows of Arabic patterns onto the floor, they had to be designed so that they could withstand the sand deposits from the sand storms.” 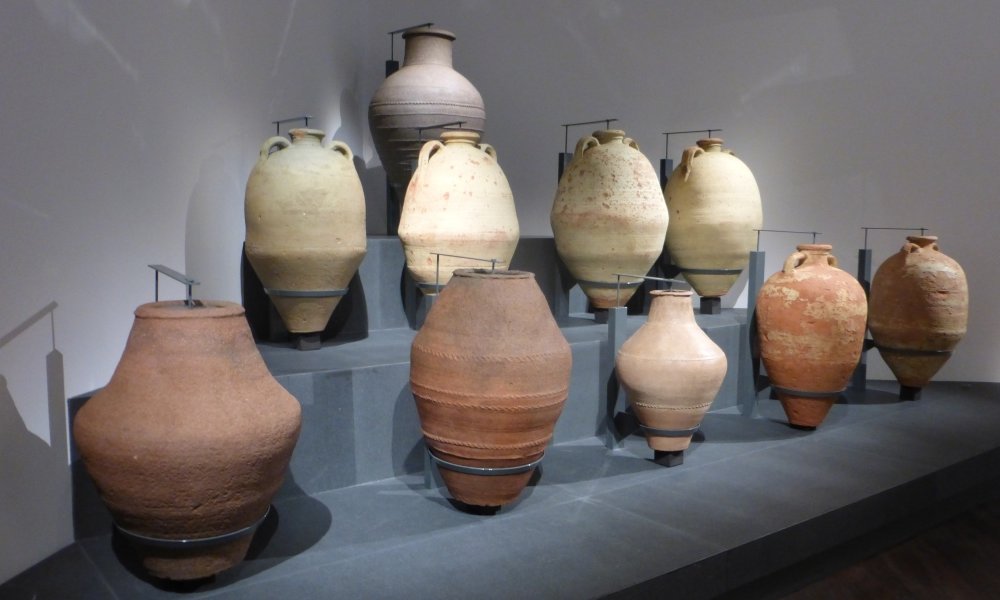 “The project was the combined work of a wonderful team of creative people. The exhibition designer Jasper Jacob, the architect David Wright of Arts Architecture and the fit out contractor Acciona. The project was about the Art of displaying the treasures of Oman and showing its wonderful seafaring traditions.”

For their work on this project Sutton Vane Associates won the Public Lighting Project of the Year at the Light Middle East Award 2017.