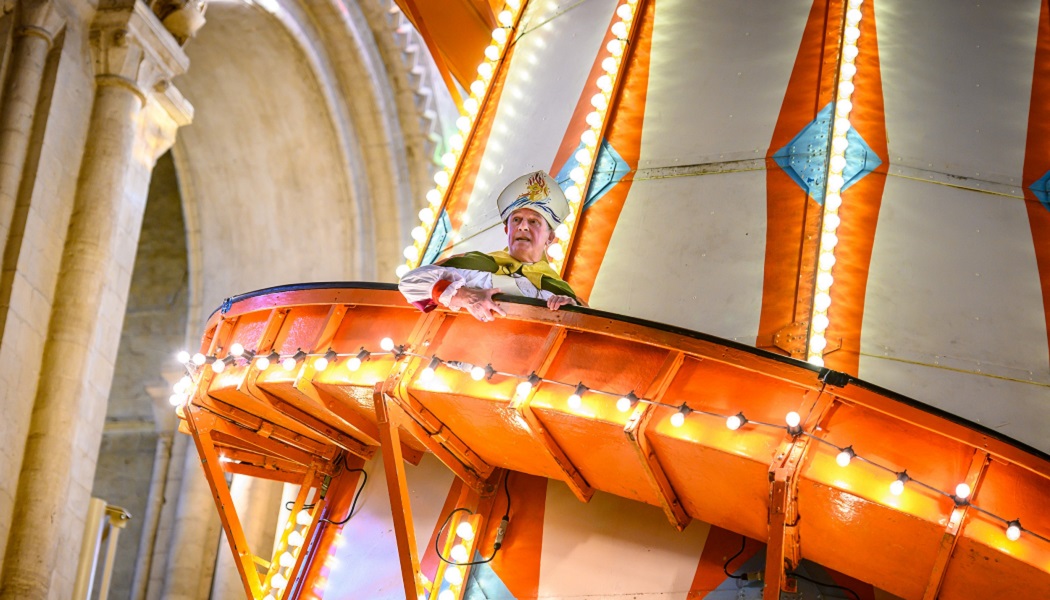 Moonwalking priests: Will 2019 prove a landmark year for visitor engagement with cathedrals?

What does a helter skelter in Norwich have in common with the moon’s surface in Lichfield and a crazy golf course in Rochester? The short answer: during this year’s school holidays they’ve made cathedrals cool.

Record numbers of people from broad-ranging places and backgrounds have visited English cathedrals this summer. We take a look at how several of these institutions have masterminded rises of between 70% and 100% in visitor numbers and, crucially, whether it can be sustained.

Cathedrals are peaceful, contemplative places where children will be bored and restless, aren’t they? A hardy band of English cathedrals have been working flat out to blow that theory completely out of the water, and they have undoubtedly succeeded.

Aside from a temporary leap in social media interest around clergymen when Phoebe Waller-Bridge’s Fleabag injected some unexpected sex appeal into the church, England’s ecclesiastical institutions have often struggled to compete with the hype surrounding other, younger UK visitor attractions. The summer of 2019 has, however, been a cornerstone moment.

A campaign united by the hashtag #WishYouWereHere has seen the nation’s cathedrals draw in swathes of new audiences through welcoming bats, crazy golf, pottery exhibitions, a lunar landscape, Lego building, a helter skelter, and high-brow art installations inside their historic chambers. English cathedrals have emerged from the chrysalis of tradition to attract hordes of new visitors.

One of this group of forward-thinking religious sites is Norwich Cathedral, situated in the heart of Norfolk’s largest city.

“Fun and faith aren’t separate things,” Reverend Canon Andy Bryant told Advisor during an interview at Norwich Cathedral, which has attracted huge amounts of publicity since installing its now famous helter skelter. Japanese television news crews and Czech radio journalists are just some of the international media to have visited the site in recent weeks. 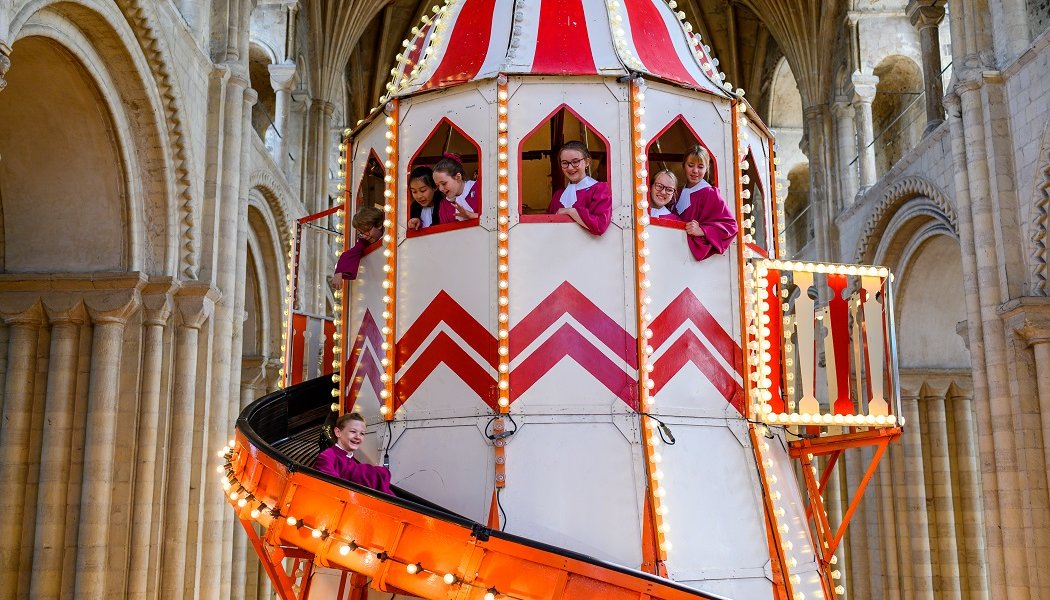 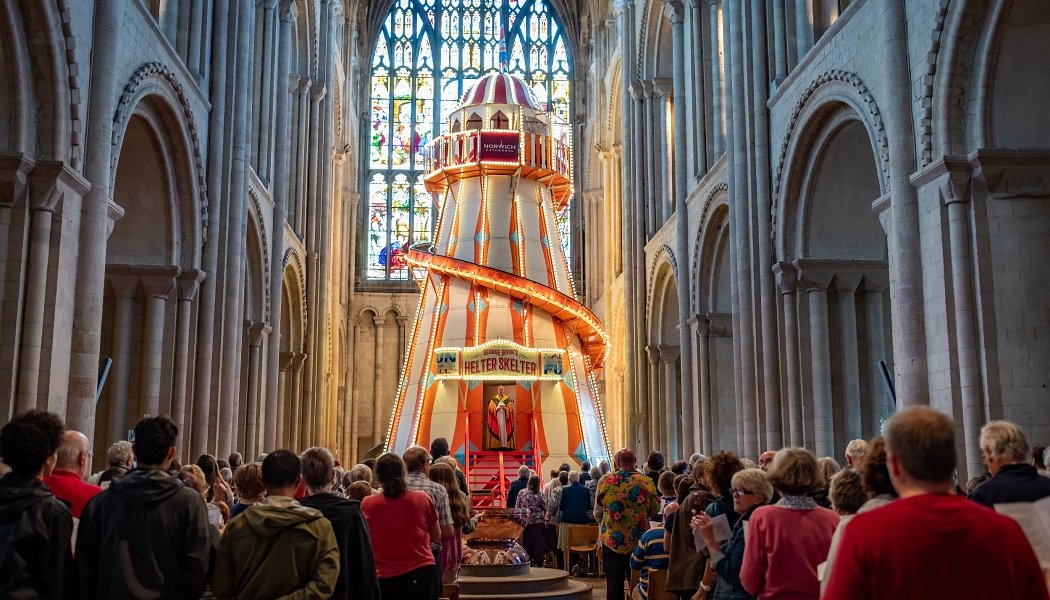 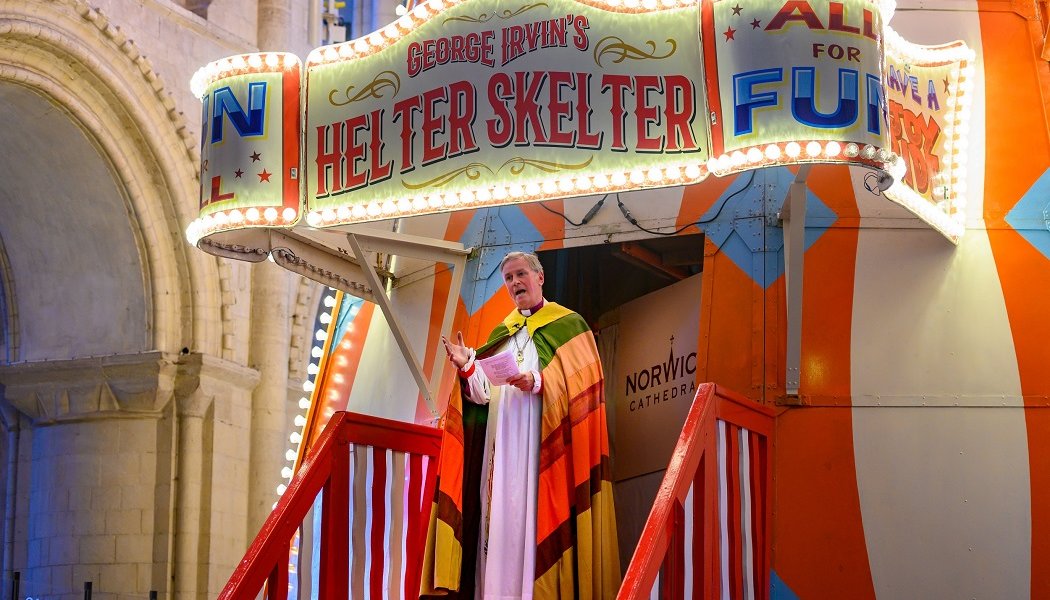 “It’s very much like the change in museums,” he explained. “People used to think museums were all about being quiet, with everything kept behind a glass case. Museums are increasingly doing more to interest and engage visitors; that’s what’s made museums and galleries come alive. We’re part of that movement.”

There is far more to the installation of a fairground ride than simply as a gimmick for the school holidays. “Often you do just need to help people over the threshold,” Bryant noted. He and his colleagues toyed with the ideas of a ferris wheel or ropewalk to help visitors better appreciate the cathedral’s unique roof bosses, but the necessity of either an articulated lorry entering the building or scaffolding and bracing wires put pay to those. The helter skelter won out in the end, and it has certainly won the cathedral a plethora of new admirers. 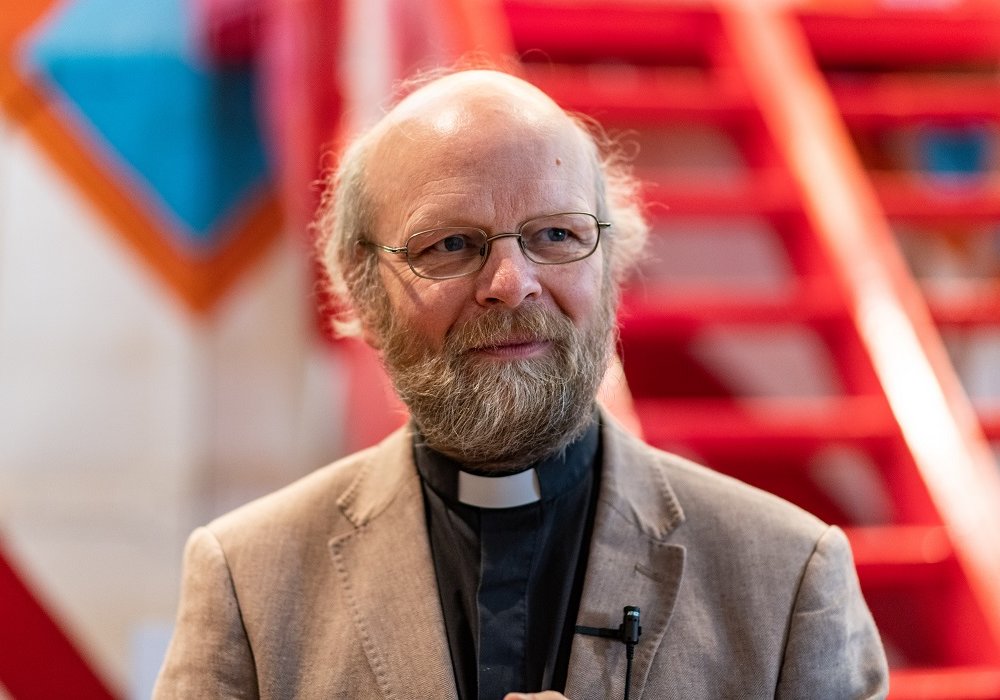 “It’s never been about visitor numbers,” the Canon insisted, despite the plainly evident jump in footfall. “It was always about engagement with visitors; an entirely different ballgame. It has been about helping visitors engage with the building differently, and particularly to engage with our medieval roof bosses. They’re one of the finest collections of roof bosses in Northern Europe.

“Obviously we are busier than normal. That said, our overall visitor number are steadily climbing and partly that’s because we have lots of interesting things on, such as family fun days and science events.”

While there has been huge excitement around the helter skelter, there has also been some consternation from members of the wider Christian community. As media interest exploded in the summer exploits of cathedrals, the BBC reported that Dr. Gavin Ashenden, Missionary Bishop for the Christian Episcopal Church, described the decision made by Norwich Cathedral as “unprofessional” and that its staff were “making a mistake about what a cathedral is good for”.

The public disagreed. Queues of visitors which stretched well beyond the cathedral’s front doors and out into the street were a mixture of people specifically there to see the much-discussed attraction and those who also took the opportunity to lie down and gaze up at the building’s unique medieval roof bosses. No matter what their motivation for joining the ever-growing line of people waiting to enter, their attendance in one way or another was supporting the cathedral.

For those who speak out against such attractions, 2019 may not simply prove a hiccup in the status quo, but rather the beginning of a new era. Bryant certainly doesn’t see this summer as a flash in the pan. The trajectory, he believes, is only heading one way. “English cathedrals are in very confident mode at the moment,” he confidently stated. “Membership numbers and visitor numbers are growing. Cathedrals have invested heavily in new facilities; book shops, cafes, visitor centres. It’s all bubbling away. They are being innovative, creative, imaginative in the things they’re doing.”

Out with the old

English cathedrals that have taken a new approach to visitor engagement this summer include:

Out of this world

Lichfield Cathedral has also taken a giant leap for cathedrals, deciding to mark the 50th anniversary of the Moon Landing by bringing the lunar surface to Staffordshire. “Creative innovation is part of our mission and it’s deep within our tradition of education and understanding,” explained Adrian Dorber, Dean of Lichfield.

Dorber firmly agrees with Canon Andy Bryant’s assessment that cathedrals are becoming increasingly vibrant, enticing places to explore. “Our visitor and worshipping numbers are growing year on year, so we know there is a cathedral shaped space out there and we hope we are occupying it in bold, fresh and exciting ways,” the Dean noted. 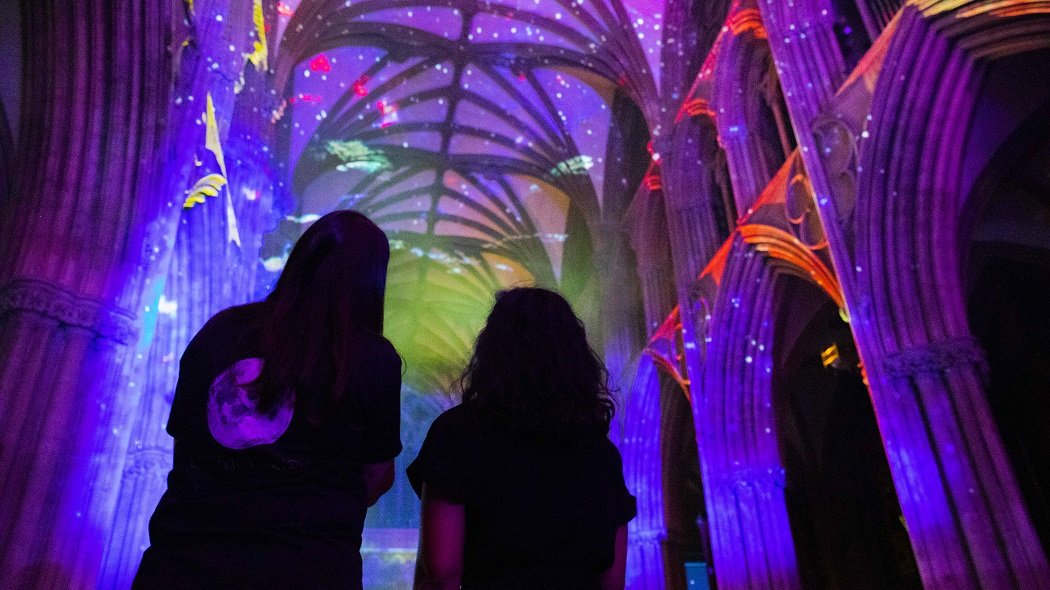 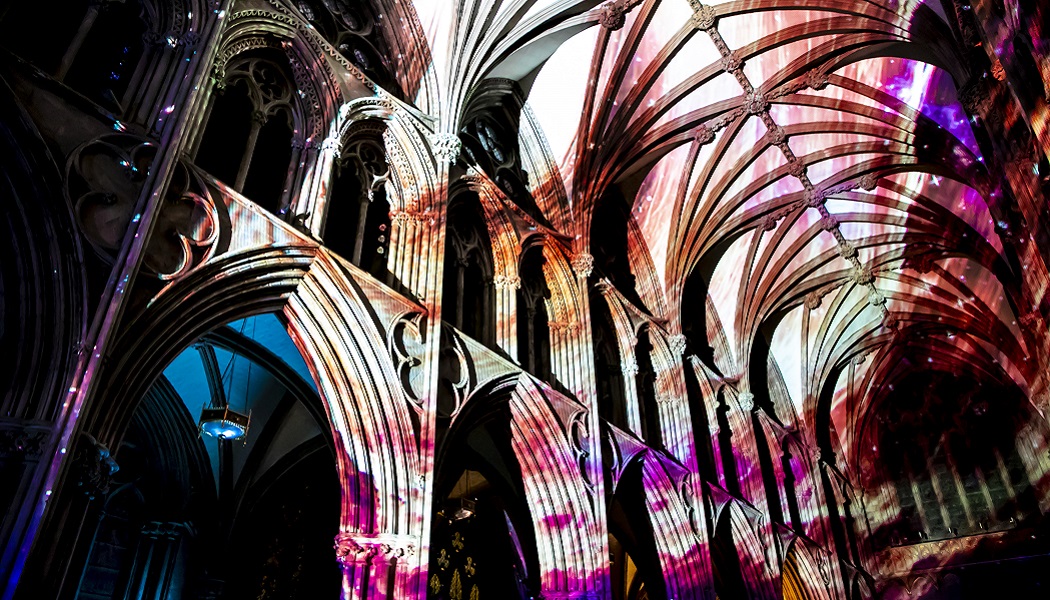 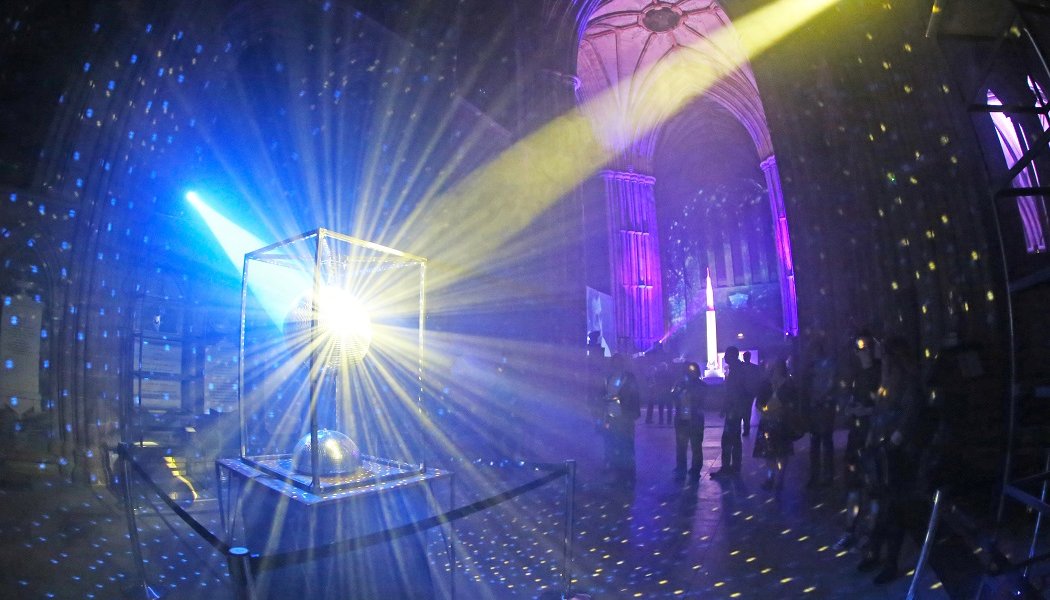 He also sees the multifaceted benefits of welcoming more and more visitors through the doors of cathedrals. “By opening up our great sacred spaces for such encounters,” he stated, “it opens up opportunities for new conversations and new dialogues on what popular opinion might sometimes judge to be no go areas.”

Lichfield is not on its own in using the Apollo 11 mission as inspiration this year. Cathedral visitors have also been afforded the chance to cycle to the moon and back at Ripon Cathedral, visit the Museum of the Moon at Derby and Gloucester Cathedrals, and experience an astronaut’s view of Earth at Peterborough Cathedral.

The changing face of the church

Innovation and creativity are recurring themes in conversations with people behind such initiatives. English cathedrals are changing.

Having swapped cassocks for crazy golf, Rochester Cathedral has received a lot of attention this summer. Much of this can be attributed to a very active and much more irreverent approach to marketing, particularly on social media, than many religious institutions have been accustomed to. 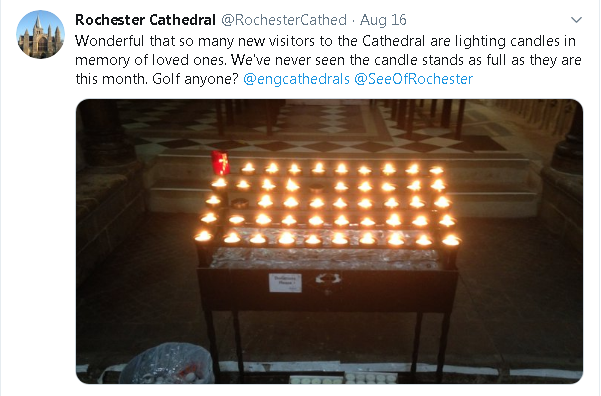 The summer of 2019 may well be remembered by those involved with English cathedrals as the time they collectively cast off the preconceptions of fustiness and ceremony. These centuries old buildings are now the places kids will be asking their parents to take them – if this type of attraction becomes a staple of the summer offering.

With Dippy, the Natural History Museum’s iconic Diplodocus skeleton, heading for Norwich next year and more lunar themed installations scheduled at various cathedrals nationally, 2020 may prove even more of a success than this remarkable summer. English cathedrals have lift off.

Dippy on Tour to be concluded at Norwich Cathedral in 2021

Cathedrals innovate once again to survive – and thrive – during lockdown