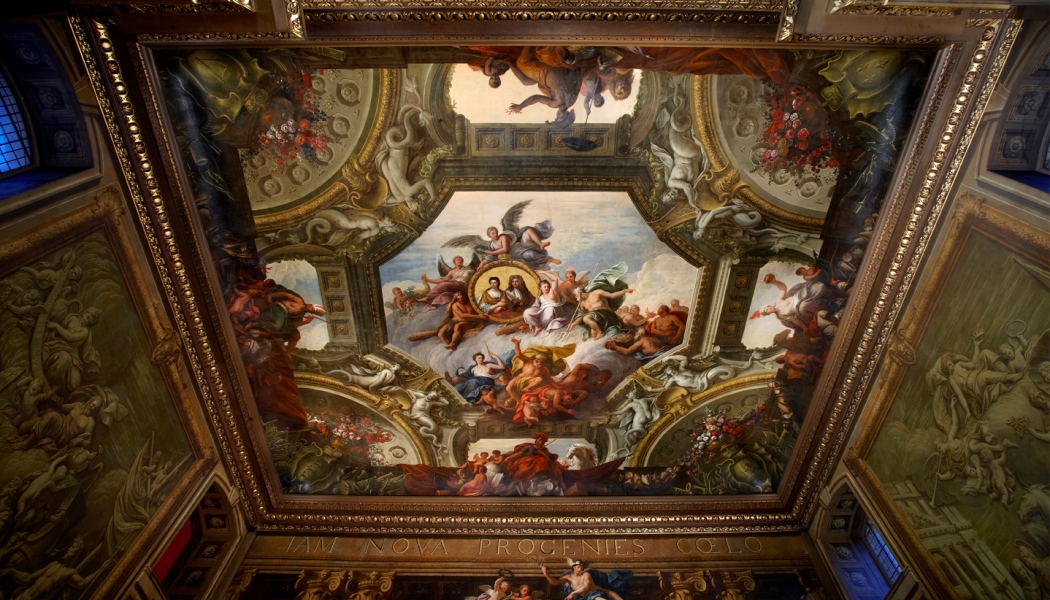 Following an initial conservation project on the famous Baroque style Painted Hall at the Old Royal Naval College (ORNC), Greenwich the magnificent paintings are about to undergo a comprehensive three-year conservation project, which will also see a new visitor entrance and interpretation

In 2013 the first phase of the conservation project saw 560 sq m of paintings in the Upper Hall cleaned and conserved, recapturing the startling vibrancy and beauty of Sir James Thornhill’s work. Following a £2.77 million pledge in November 2014 from the Heritage Lottery Fund, the ORNC is embarking on the second stage of this transformational project and has launched a £1 Million Future Fund appeal with every gift made to the fund being doubled by HLF/DCMS.

The second phase of the project aims to conserve the remaining 3,700 sq m of wall paintings including those on the Lower Hall, with its spectacular ceiling depicting the founders of the Royal Hospital for Seamen – King William III and Queen Mary II, and will also create a new visitor area in the undercroft beneath, with improved facilities and new interpretation.

This week the ORNC is creating London’s largest ever painting-by-numbers to celebrate Thornhill’s 340th anniversary and raise awareness and funds for the major conservation project. As part of the conservation project, from 27 July, visitors to the ORNC will be able to enjoy a dedicated exhibition showcasing the work being done.

“The idea is to tackle the whole Painted Hall and all the painted surfaces,” says Will Palin, director of conservation at the Old Royal Naval College in Greenwich. “We had a pilot project two years ago when we conserved paintings on the West Hall. That was very successful from the point of view of its appearance and vitality.”

One of the problems discovered in the pilot project was that the varnishing that had been put on the paintings over the centuries had reacted with the environmental conditions with microscopic cracks forming on the surface giving a whitened blanching effect. The pilot project, says Palin, was mostly straightforward cleaning bu in the rest of the hall where there is more exposure to light, heat and humidity there is a much bigger problem with the varnish. Even with the delicate nature of the conservation during the work the public were encouraged to come up on to the scaffolding and see the work in progress.

“This pilot scheme has established that this conservation can be done successfully and that there was an appetite from the public for conservation in action,” said Palin. “The next phase is a whole different ball game, just the lower hall ceiling is 3,700 sq m so there is a lot of surface to deal will.”

Preparation work is already underway to stabilise the environmental conditions with work on the conservation beginning at the end of June 2016. 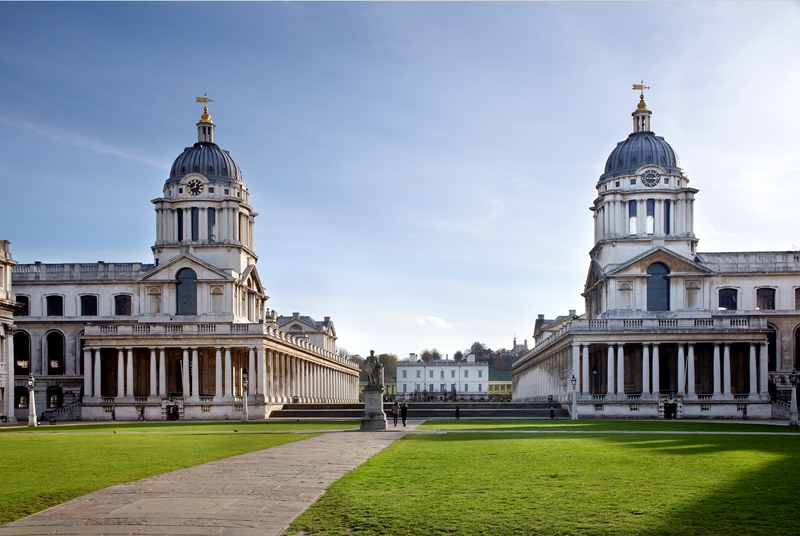 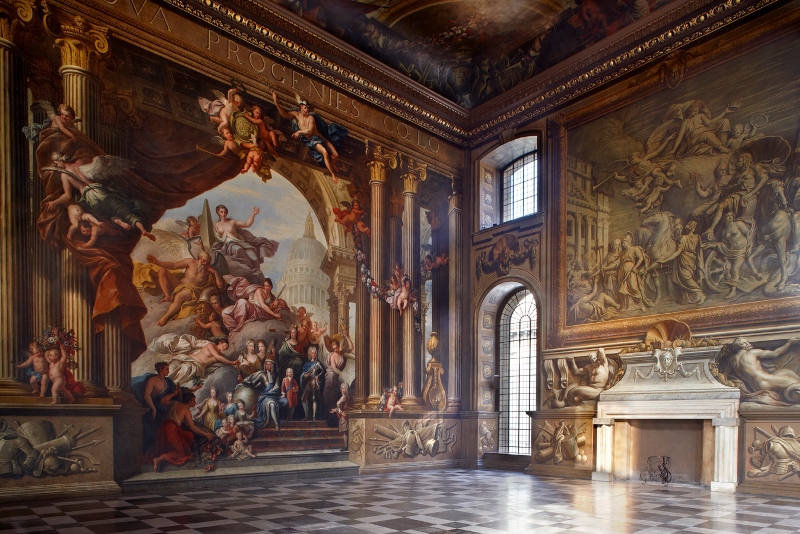 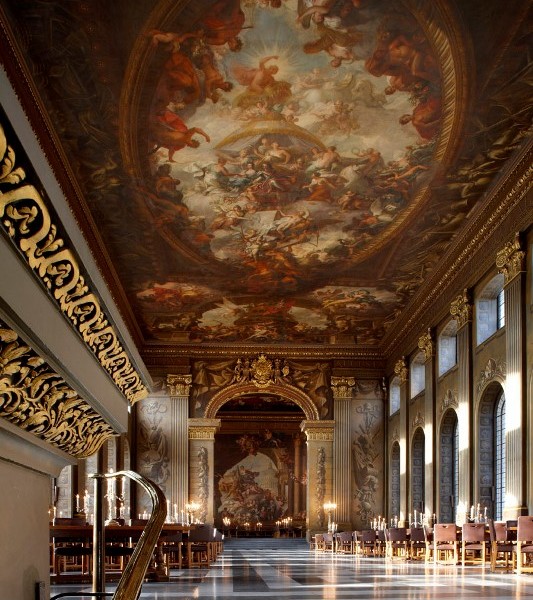 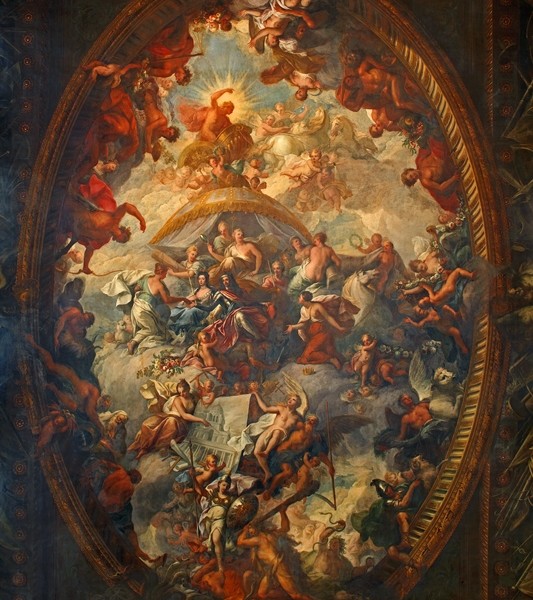 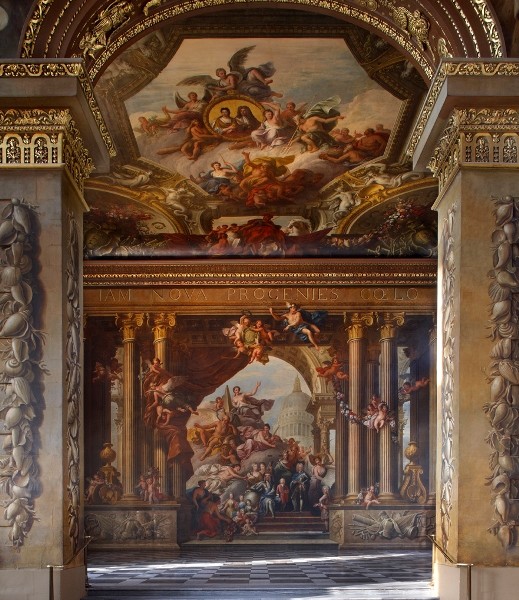 Hugh Broughton Architects will manage the complex conservation of the Painted Hall and will focus on improving the environment, enhance the presentation and interpretation of Thornhill’s paintings, as well as developing a new accessible visitor entrance and reception below. Central to the project will be Hugh Broughton’s ability to manage a large team of consultants, conservators and technical experts. The activity, education and interpretation offering at the ORNC will be fully aligned with the wider conservation project, under the leadership of Hugh Broughton’s extensive team of skilled project managers and architects.

“We have to stabilise the environment as best we can to ensure the longevity of the paintings so we don’t have to do this again for another 100 years,” says Palin. “A new system of climate control will be fitted and a new regime of monitoring will take place in the future.

Curteis and his colleagues are currently monitoring and making conditions stable ready for the massive undertaking of the treatment of the damages caused to the paintings by the environment. A network of censors have been put in place to get a better understanding of elements such as UV light and heat inside the Painted Hall. “We are now able to understand better what is going on and can now work on a theoretical model to ensure the long-term survival of the paintings by putting in place a controlled environment,” says Curteis.

Because of the unstable environment the architects tried to think of ways to minimise the impact of visitors’ coming in and out of the Painted Hall through a direct entrance. The solution was to bring them up through the undercroft, which has allowed the teams not only to regulate the environment but provide a new visitor entrance. This will for the second part of the project and will see a remodelling of the undercroft below the Painted Hall, which will become a new visitor entrance, orientation space, café retail and toilets.

“The current entrance is through the Painted Hall and with doors opening all the time the air exchange and moisture vapour has had a detrimental effect on the paintings,” says Palin. “We now want to bring people up from the undercroft via two large staircases into the vestibule of the Painted Hall. The undercroft has been subjected to unsympathetic changes over past few 100 years and we will be stripping back the modern clutter to reveal the full beauty of the undercroft.”

The new improved interpretation of the Painted Hall is currently being developed but what is clear is that ORNC want the visitor to be able to choose the interpretation that suits them whether it be print, audio or digital (possibly a downloadable app). However, one of the key interpretive elements will be face-to-face interpersonal introductions through visitor guides and volunteers.

“We want the undercroft to deliver as much back story of the Painted Hall so that the visitor gets all the basic facts, the history and a good idea of the personalities behind the art and architecture,” says Palin. “We want the Painted Hall to be an uncluttered, beautiful space where people can sit and engage with the architecture and the paintings.”

The Painted Hall’s conserved paintings and new visitor centre will open in December 2018 and throughout the project public access to the works will be extended and during a 12-month period visitors will be allowed to climb the scaffolding and see the conservation in action.

Set in the heart of Maritime Greenwich, the Painted Hall is the largest painted interior in Britain and is set within one of London’s most famous landmarks