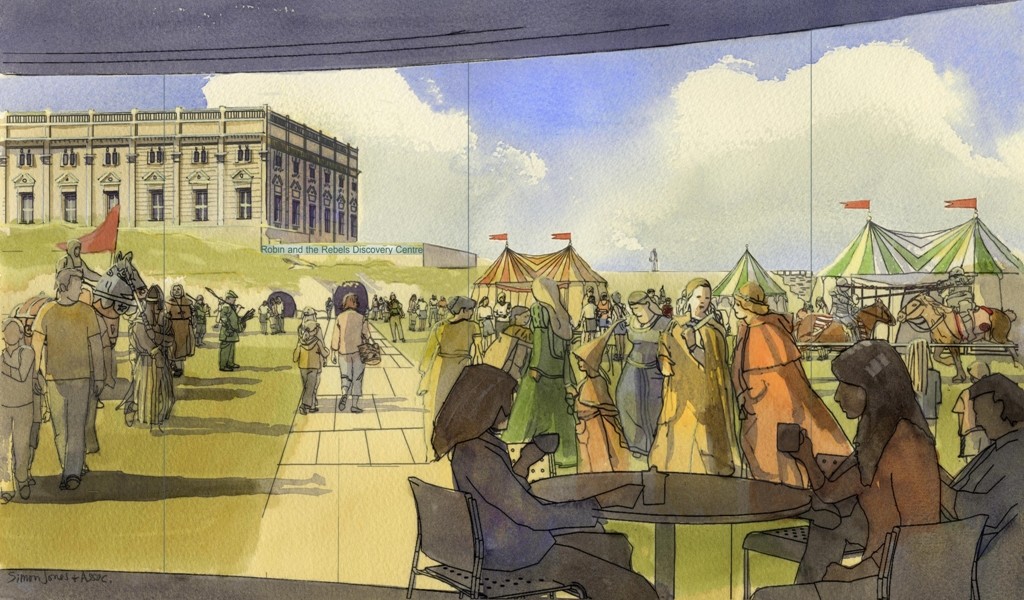 Robin Hood is mounting an ambitious bid to sneak back into Nottingham Castle.

The world-famous outlaw forms part of a £15million bid to the Heritage Lottery Fund (HLF) to support the development of Nottingham Castle Museum & Art Gallery as a world class heritage attraction.

The Castle Working Group, a business-led partnership involving Nottingham City Council and a range of Nottingham stakeholders, has developed concept plans for the improvement of the Castle, offering fun and excitement for all the family and a nationally significant centre for learning about protest and rebellion. The plans, estimated at £26m, include:

The bid is divided into the following themes:

Theme 2 – Robin and the Rebels: Protest, Rebellion and the rise of Democracy (New interactive and participative gallery)

Consultation undertaken during August and September this year revealed that “more ways to learn about Robin Hood”, “more access to the caves”, “more ways to engage and learn about the Medieval Castle” and “improved museum exhibits” were the top suggestions for improvements to Nottingham Castle Museum & Art Gallery, with 94% of visitors feeling that if improvements were made in these and other areas then they would be more likely to return to the Castle for further visits.

An Economic Impact Assessment has identified the following added value that a redevelopment of the Castle will have for Nottingham over a ten year period if the development takes place:

Nottingham City Council Portfolio Holder for Leisure, Culture and Tourism, Councillor Dave Trimble said: “This is a really exciting bid and I want to thank the Castle Working Group and also everyone who took part in the consultation for getting the plans for the Castle to this stage. Of course, there’s still a long way to go before we can turn these plans into reality but this is a really important step along the way.

“The proposals in this bid would enable us to capture the role our iconic Castle has played in rebellion and freedom over the past 1,000 years and to bring to life the story of Robin Hood in a way that will create an exciting and fun experience for all the family. I was excited to see that the caves came out particularly strongly in the public consultation and this gives us an opportunity to showcase this unique part of the city’s heritage.

“The ambition to create a world-class visitor attraction at the Castle would also bring the additional benefits of regenerating the surrounding area, bringing major investment into our city and creating and sustaining hundreds of jobs.”

The castle bid comes as the Arts Council England awards Nottingham City Council’s Museums £1.3 million over the next three years.

The funding will enable the museums to put ambitious and sustainable development plans in place to support Nottingham’s bid for national Designation status for its important machine-made lace and fine and decorative arts collections, national recognition for Wollaton Hall, the refurbishment of three new areas of the hall and a regional partnership with the Natural History Museum.

It will build on Nottingham’s existing partnerships with national galleries and universities, boosting the opportunities for national and international touring programmes. It will also develop the use of new and digital technology and media programmes to make the collections much more widely accessible.

And it will build on Nottingham’s reputation for ground-breaking community and youth involvement in the City Council’s Museum Service by delivering a range of new targeted programmes, by offering two apprenticeships for young people from a non-traditional arts background, and enabling more opportunities and for volunteers within the City’s museums.