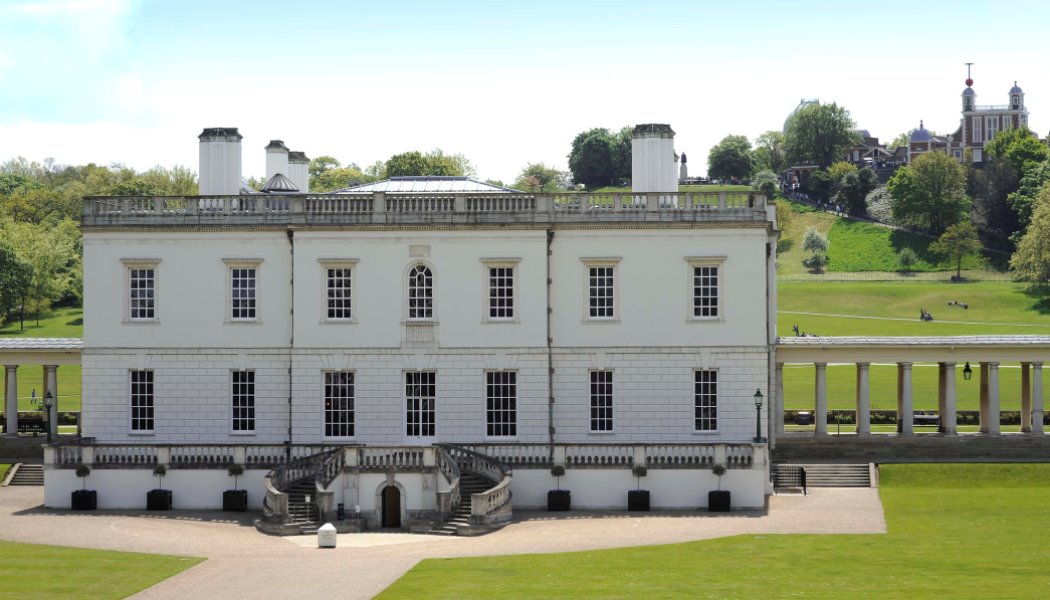 In preparation for this year’s 400th anniversary of the commissioning and design of Queen’s House, the Inigo Jones building has undergone a 15 month refurbishment and reopened today with restoration of architecture and art complete, new exhibitions and commissions unveiled and the Armada Portrait of Queen Elizabeth I, saved for the nation earlier this year, taking pride of place

Here Christine Riding, curator of Queen’s House describes the importance of the building and its history, the challenges the refurbishment posed and the achievements it has made

The Queen’s House was commissioned in 1616 by Anne of Denmark and designed by Inigo Jones, who is often described as the first great British-born architect. In creating the Queen’s House, Jones was inspired by the architecture of Ancient Rome and Renaissance Italy, and in particular the work of Andrea Palladio, whose celebrated villas, palazzi and churches in Venice, the Veneto and elsewhere, are – one might say – the Great Aunts and Uncles of the Queen’s House.

When completed and furnished in 1639, for King Charles I and Queen Henrietta Maria, the House was the physical embodiment of a highly sophisticated, cosmopolitan and international court culture, displaying fine and decorative art by artists and craftsmen from across Europe – a grand villa and a royal retreat between the Royal Park and Tudor palace of Greenwich. But more than that, as the first complete classical building in the country – focusing above all on symmetry and perspective, mathematical proportions not ornate decoration (on the exteriors at least) – the Queen’s House was nothing short of revolutionary, and in the context of Greenwich itself, must have seemed like a luminous, classical space ship landing next door to the lively skyline and warm, red brickwork of Henry VII’s palace – the contrast must have been simply astonishing. As a vision of the future, perhaps inevitably the Queen’s House outlived the Tudor palace, and is today the last remaining building of the 16th and 17th-century palace complex. 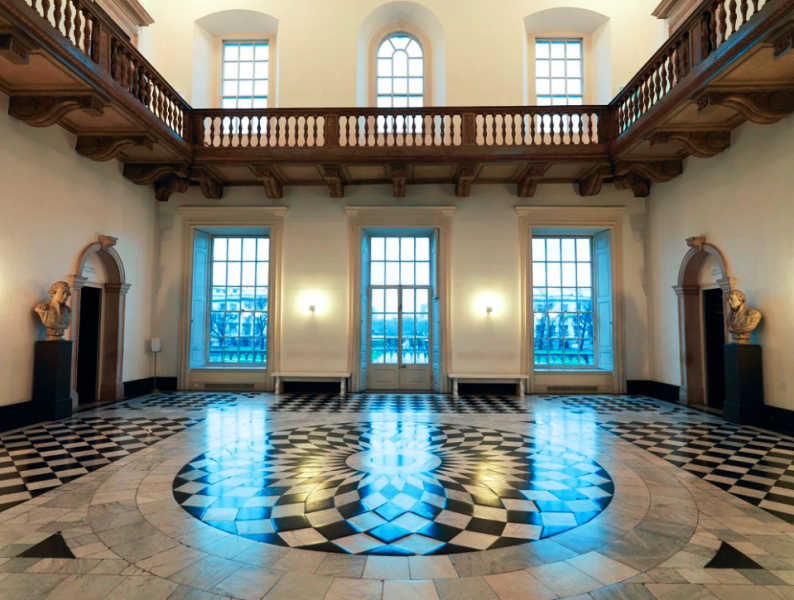 The Queen’s House is by any standards, a very special place. But the Queen’s House posed a number of challenges for those of us tasked with refurbishing and re-presenting it in the 21st century. How to do justice to its rich and complex history, how do we let it live and breathe, let it excite and inspire, as it did when it was first built?

With a focus on letting the architecture speak for itself, we re-glazed the entire house, opened up the windows that were blocked, and uncovered fireplaces and other architectural features that were concealed. In so doing we have reinstated the full glory of the spectacular views across Greenwich. The two major conservation projects, the King’s Presence Chamber and the iconic Tulip Stairs, have transformed the wonderful interiors. 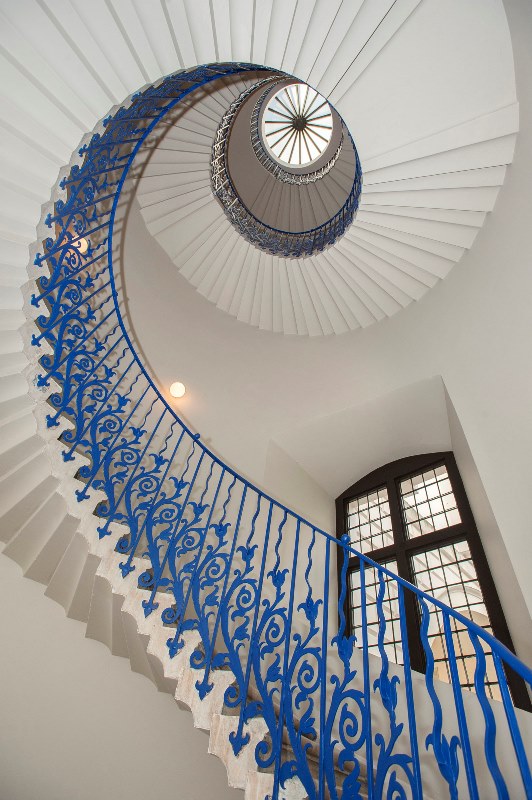 We developed a new colour palette in collaboration with Patrick Baty, an expert on historic paint and interiors – red and blue for the royal spaces, warm greys and stone colours for the rest of the galleries. New lighting throughout, including in the Great Hall, the Tulip Stair and other areas, where light fittings by the renowned designer, Michael Anastassiades, are displayed, some pearl-like, some linear, in keeping with the balance and geometry of the House. We’ve also created new graphic design, welcome and wayfinding, new richly-upholstered furniture and new display cases, and the complete redisplay of some 22 galleries.

When the Queen’s House closed last year there were about 170 works of art on display, most of which were paintings. Now there are over 450 works in the House, the vast majority from the National Maritime Museum’s permanent collections, dating from antiquity to the present day, underlining our commitment to make as accessible as possible, to all our visitors, the national collection in our care.

Quality and diversity have been the guiding principles for the displays, from what is displayed to how it is displayed. And, we have scoured the collections for female portraits and female artists, in order to address the gender imbalance of Maritime Greenwich. In this regard, the recent acquisition of the Armada portrait, as a supreme representation of female power and authority, helps our ambitions to make the Queen’s House the focus for women’s histories and narratives. 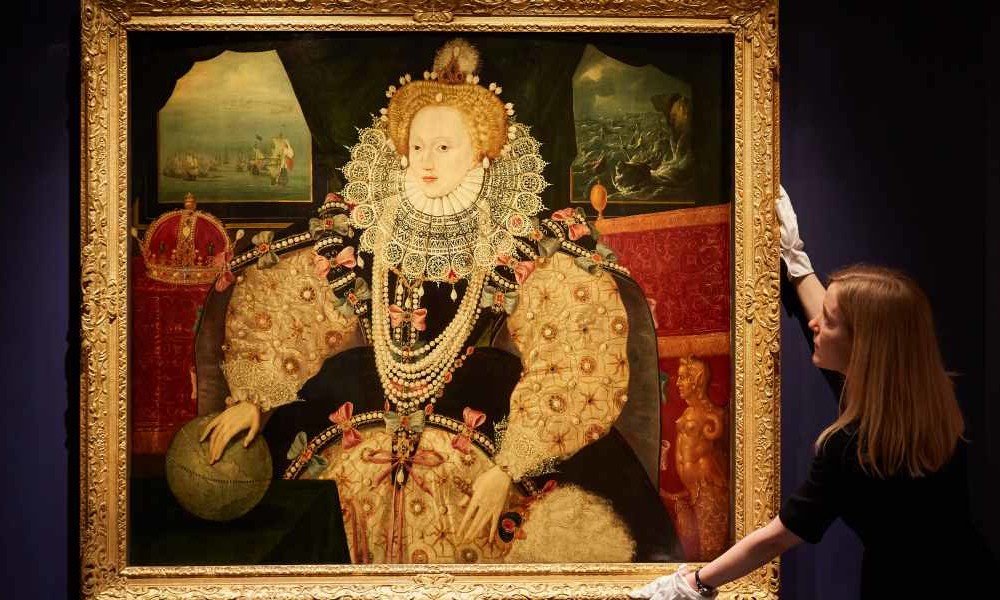 In July the Art Fund campaign to save Elizabeth I portrait succeeded through public donations and a £7.4m HLF grant

These loans have allowed us to give our visitors a richer experience, and to tell the wider story of the Queen’s House, in particular the royal and architectural stories. So now you can walk through the galleries, from royalty to navy, from navy to maritime, moving through time, through art and through history in keeping with the changing fortunes and identities of the Queen’s House.

And the centerpiece of this approach to the redisplays is the Great Hall and the new artwork by Richard Wright. The works by Orazio Gentileschi that were painted for the ceiling of this Hall have been absent from the Queen’s House for over 300 years (they are in Marlborough House to this day). 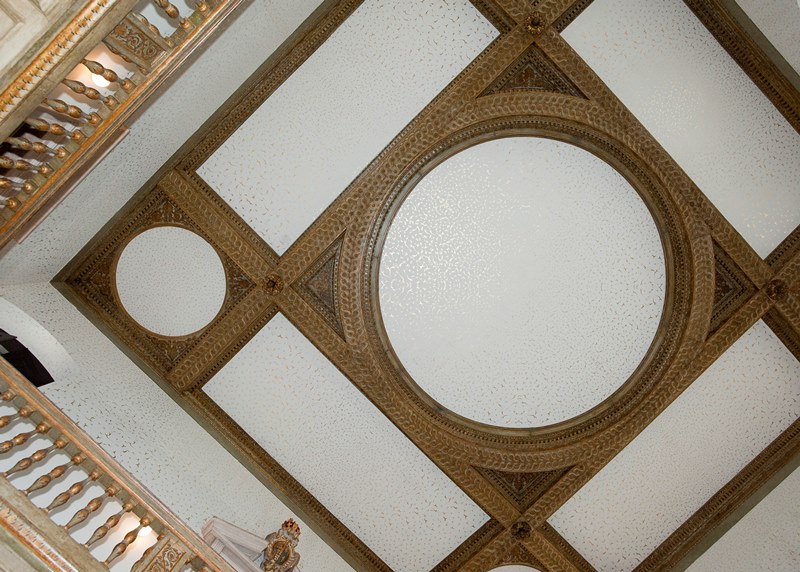 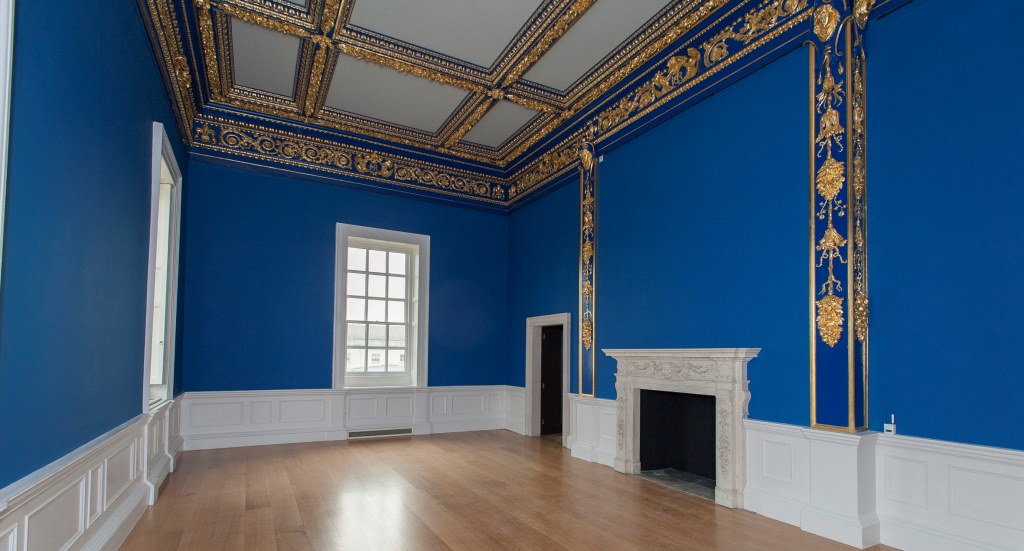 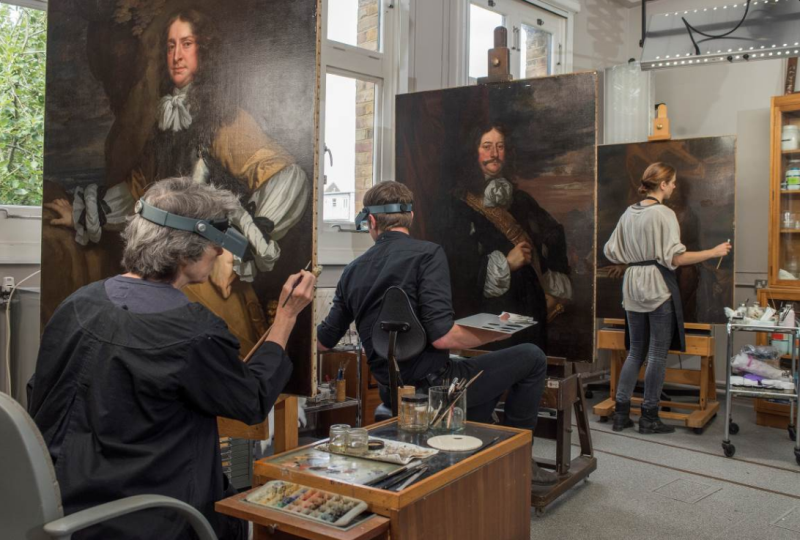 Rather than attempt to return to the 1630s, when the paintings were installed here, we decided to return to the spirit of that moment, and commission an artist to create a new, bespoke work of art that would reintroduce the kind of princely magnificence that characterized the interiors of the Queen’s House as a royal villa.

In responding to the spirit of Inigo Jones, Richard has been attentive to his work both as an architect and as the designer of court masques and entertainments, creating a work entirely in gold leaf that complements the robust, geometric structure of the ceiling and at the same time is playful, elusive and transitory, in the manner of a theatrical performance.

Bringing the past to life: Google Tango AR at Queen’s House