Share
The recent refurbishment of the OUMNH provided the perfect opportunity to carry out a major relighting project using a revolutionary bespoke lighting design. Richard Francis, of Monard Electrical talks to Advisor.

Much has been said recently about the refurbishment of the Oxford University’s Museum of Natural History, as it was greatly missed during the long months it was closed for these works. The transformation, through the extensive cleaning and fixing of the roof as well as the complete relighting, has meant that light, both natural and artificial, now illuminates the stunning interior of one of the country’s most distinctive neo-gothic buildings.

The idea to relight the Museum came about in December 2011, during a routine survey of lighting levels in the Museum. Oxford University’s Deputy Electrical Engineer, Robert Gregg, first noted that there could be an opportunity to do this during the planned £2.1m project to clean, repair and conserve the glass roof and structure. What started as a simple lighting survey soon changed and expanded into a two year journey of discovery, with an impressive end result. 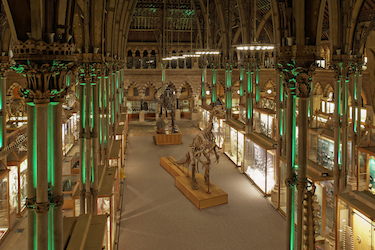 The Grade 1 listed museum building was built in 1860 and was also home to the famous Oxford Evolution Debate of the same year. The major work to the roof structure was originally to include some limited rewiring works to improve the lighting levels in visitor circulation areas. But it was clear that there was the potential to develop something unique in the history of the building. The lighting project moved from small maintenance works to a substantial re-lighting project across the museum. The end solution comprises a combination of Zumtobel, Bega and Limburg luminaires, all carefully chosen and positioned to create a superb effect, whilst minimising visual intrusion.

With a listed building, comes the responsibility to ensure the high conservation standards of all the work carried out. Typical of buildings of this period, the main structural beams of the Museum were made from cast iron, much like the train stations and other buildings of the Victorian period; drilling into these was not an option. The luminaires and cabling needed to be attached to the structure securely and discreetly, as this installation needed to not only last decades, but also ensure the safety of the hundreds of thousands of visitors to the museum each year. Richard Francis of Monard Electrical, had an idea to overcome this, which he developed with the Ashmolean Museum’s Mountmaker, David Provan. They developed bespoke magnetic brackets, all purpose-designed using magnets sourced from the aircraft industry. The use of magnets followed exhaustive testing for compatibility with the Zumtobel supplied luminaires, and for effects such as heat and degradation over time. In order to safely fix the light fittings and over 4km of cabling, in excess of 4000 brackets, which included 8 different types, were created for the project. All of these were manufactured by Oxford University’s Ashmolean museum, whose previous experience of using magnets to fix exhibits was invaluable. “Whilst there were many technical challenges to overcome there were also logistical challenges – the Ashmolean exhausted the European stock of one of the specialist grade magnets, necessitating a last minute redesign of a key bracket” recalls Francis. 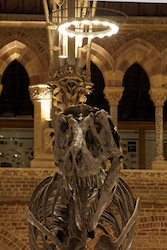 All luminaires are dimmable and are networked to a Zumtobel lighting control system, with an integrated central battery for emergency, designed in combination with Oxford based M&E consultancy CBG Consultants Ltd. Day to day operation is fully automated with daylight control by a sophisticated, roof mounted Skyscanner device that constantly monitors the amount and direction of available daylight. For events and special occasions, a choice of carefully balanced lighting scenes, including RGB colour change, is easily accessed by the museum staff, entirely wirelessly, via an iPad.

As summed up by Robert Gregg, “We couldn’t have achieved this without the obvious commitment, passion and pride in the project displayed by the whole team, and I illustrate this with just one example – 4000 wiring terminations on the project and not a single, solitary loose connection or fault – extraordinary”.

With increased awareness of the need to maintain and improve our country’s buildings, it is also important to focus on the need for sustainability, longevity and overall efficiency of lighting schemes for museums in the future. This project illustrates the ability to integrate experience with innovation across a good collaborative cross-disciplinary team. Professor Paul Smith, the Museum’s Director said that, “With Monard’s wealth of experience working in heritage environments, the team showed the sensitivity and awareness needed when working in the museum.”

The visiting public are also clearly impressed with the finished article. With an entirely refurbished roof and spectacular new lighting system, the Museum of Natural History re-opened on 15 February 2014, with a dawn-till-dusk event which attracted a record attendance of approximately 5,300 visitors and 40,000 visitors in first 2 weeks.

The Oxford University Natural History Museum is open to the public every day. See www.oum.ox.ac.uk for more details.

Richard Francis is a Partner with Monard Electrical and specialises in lighting developments in listed and heritage buildings. His previous projects include major building refurbishments and several high profile projects with the Ashmolean Museum, such as the Randolph Sculpture Gallery and Ashmolean Museum Broadway.

All images are courtesy of Redshift Photography