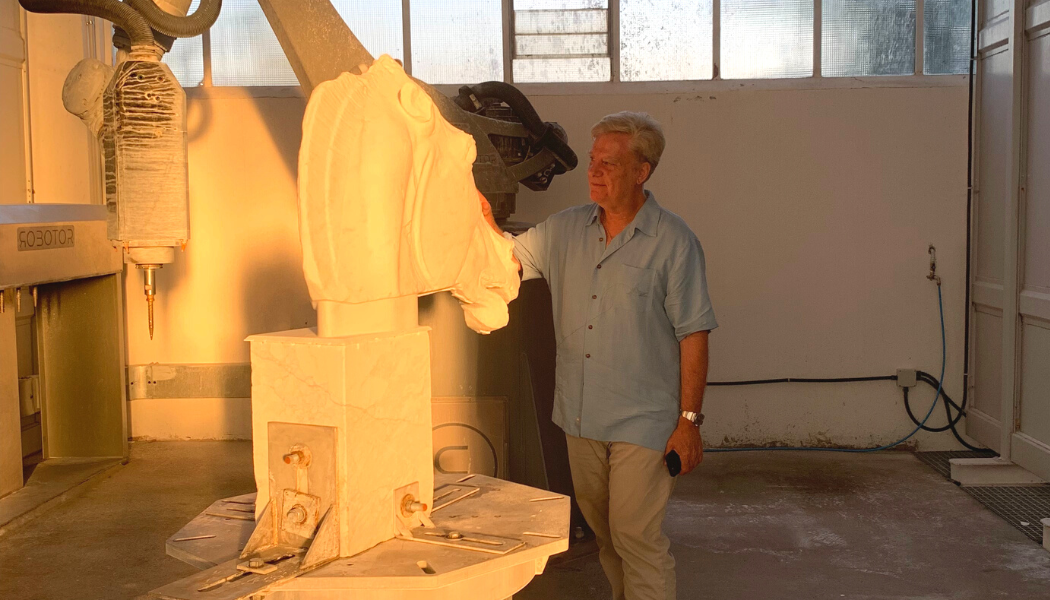 Image: Roger Michel with one of the replicas (IDA and Robotor)
Share

An exhibition from the Institute of Digital Archaeology, which created the replicas from 3D scans, hopes to challenge the British Museum in a “friendly and constructive way”.

In its latest effort to persuade the British Museum to repatriate its Parthenon Marbles to Greece, the Institute of Digital Archaeology (IDA) plans to exhibit its 3D-scanned, robot-tooled marble replicas close to the museum.

Roger Michel, Founder & Executive Director of Oxford-based IDA shared the plans with Advisor ahead of the exhibition next month.

The replicas have been created after high quality scans of the marbles were taken at the museum. These scans were then converted into 3D files and carved by a robotic arm from a Greek marble base, which were then hand finished by specialists.

The robotic arm used in the construction phase of the replicas has already caught the attention of the New York Times and The Washington Post, as has the replica’s potential implications for repatriation.

In the Carrara workshop today with Nat Geo and our first block of rare Pentelic marble.  The final carving is set to begin.  Many thanks to our friends in Greece who made this happen — let's bring the Marbles home! https://t.co/tkpQOUx3wt pic.twitter.com/XOE1VhQ6bA

The exhibit is set to feature a replica of the Horse of Selene in two versions; one as it stands in the British Museum, and a second version presented in what is believed to be its original surface colours.

Further replicas could also be part of the exhibition, but this is provisional on the objects being successfully shipped from Athens to Italy to the UK in time for the exhibition’s start in September.

The replicas and the exhibition, both funded by the IDA, are expected to be exhibited in London for a month.

The exhibition’s exact location is still to be announced. Michel told Advisor that the owner of the land on which the exhibition is to take place asked the IDA that is not disclosed ahead of its opening, for fear of picketing.

Many thanks to Greece's Ambassador Raptakis for his longtime support of our efforts to bring the marbles home. The success of our projects always depends on the close involvement of stakeholders. https://t.co/zJOiM1Iq6t pic.twitter.com/xIaGrooHUD

Michel said the exhibition’s proximity to the Museum was chosen to challenge the museum in a “friendly and constructive way”.

He hopes it will raise questions about the museum’s justification that there is educational value in the marbles now that they have lost colour and definition, and do not appear as they did when first created.

The exhibition is expected to present the replicas alongside explanatory wall panels, and videos featuring archaeologists who will describe the history of the objects on which the replicas are based.

The interpretation of the objects will not centre around the repatriation debate, said Michel, instead it will focus on the history of the objects and the painted surfaces the objects are thought to have had. Online material about the objects is set to be published simultaneously.

After the exhibition has concluded, Michel said the IDA is open to working with the British Museum to make the objects part of its gallery, but he believes this outcome is unlikely.

Instead, after growing interest in the objects and the implications of their existence in debates around repatriation they may be toured across the UK and the world, with Greece a likely stop along the way.

A “prominent UK museum” has also made an offer to display the objects, Michel said.

The exhibition comes as the British Museum’s position on the return of the marbles shows signs of changing. Earlier this month it hinted at the formalisation of a partnership with Greece. Jonathan Williams, the museum’s deputy director, told The Sunday Times Culture magazine that a ‘Parthenon partnership’ could be arranged with Athens.

Michel said the IDA did not intend for the exhibition “to be a distraction to any ongoing negotiations”.

But, he added, “it’s an affront to [Greek] national dignity that somebody else has them”.

The IDA also plans to launch a virtual rendering of the Acropolis early next year, taking inspiration from Harvard’s Digital Giza project, which will allow users to explore the location in virtual reality.