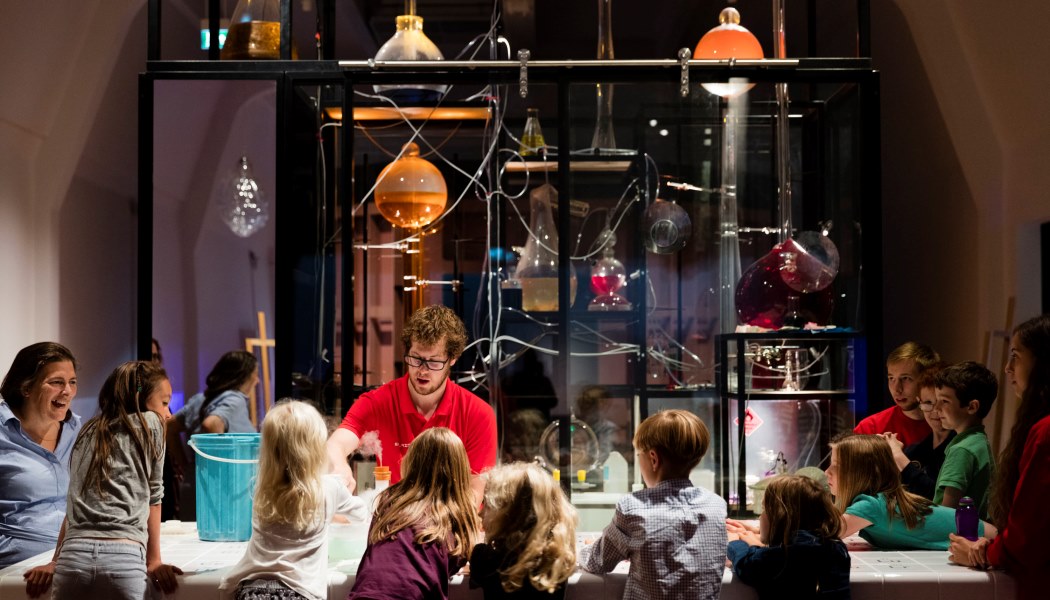 Wonderlab: The Statoil Gallery is the first of three new galleries to open at the Science Museum and its most ambitious interactive gallery to date, which it says ‘invites visitors to think like a scientist’.  The £6 million permanent gallery features unique exhibits, specially-commissioned artworks, demonstrations and immersive experiences led by the museum’s team of science communicators, known as Explainers, that it hopes will inspire visitors of all ages to wonder at the science and mathematics that shape the world around us.

Wonderlab has been designed by award-winning practice muf architecture/art, which specialises in working with artists on innovative projects celebrating the social and playful aspects of public spaces with an open-ended, process driven and experimental approach. Their current projects include: White Hart Lane in the shadow of the stadium, the design of Wellcome Collection’s Bedlam and ongoing work with the V&A.

“We set out designing Wonderlab to reveal the wonder and beauty in science and maths and to get our visitors to think like a scientist with close attention, curiosity and creativity,” said Wonderlab curator, Toby Parkin. “It’s been a real joy to work with talented architects and artists to put these ideas at the heart of everything from the most spectacular exhibits in the gallery right down to the smallest details in the furniture.” 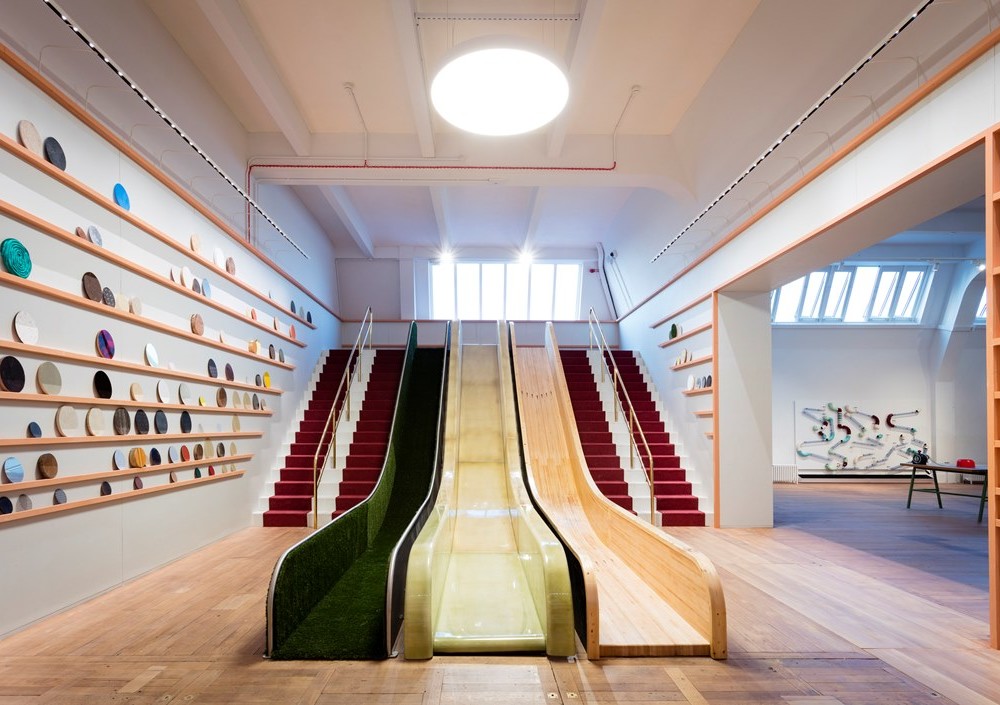 The Museum’s goal for Wonderlab is to see 200,000 young people in school groups visit the gallery for free each year (other visitors will have to buy a ticket), twice as many as the previous interactive gallery could accommodate. Since June, almost 30,000 visitors have booked on schools visits to Wonderlab, which further boosts the Science Museum’s credentials as the most visited museum in the UK for booked school groups, with 380,000 young people visiting last year. For Wonderlab, the Museum is also working with IntoUniversity, Gingerbread and Family Action to increase free access for disadvantaged young people, children and families in difficult circumstances.

Wonderlab has 50 exhibits across seven zones, with topics as diverse as sound, forces, light, electricity, maths, matter and space and is also home to three live demonstration areas and a 120-capacity showspace inspired by the Royal Institution’s world-renowned Faraday Theatre.

Science Museum Group Director, Ian Blatchford, said: “The Science Museum Group’s core purpose is to ignite curiosity in our visitors. We’re confident we will do this in spades with Wonderlab: The Statoil Gallery – a perfect mix of curatorial flair, scientific clout and joyous imagination.”

The 25,000 sq ft gallery and entrance halls were created by removing the layers of suspended ceilings and partitions of what were three separate exhibitions, to reveal the simple drama of the museum’s third floor. 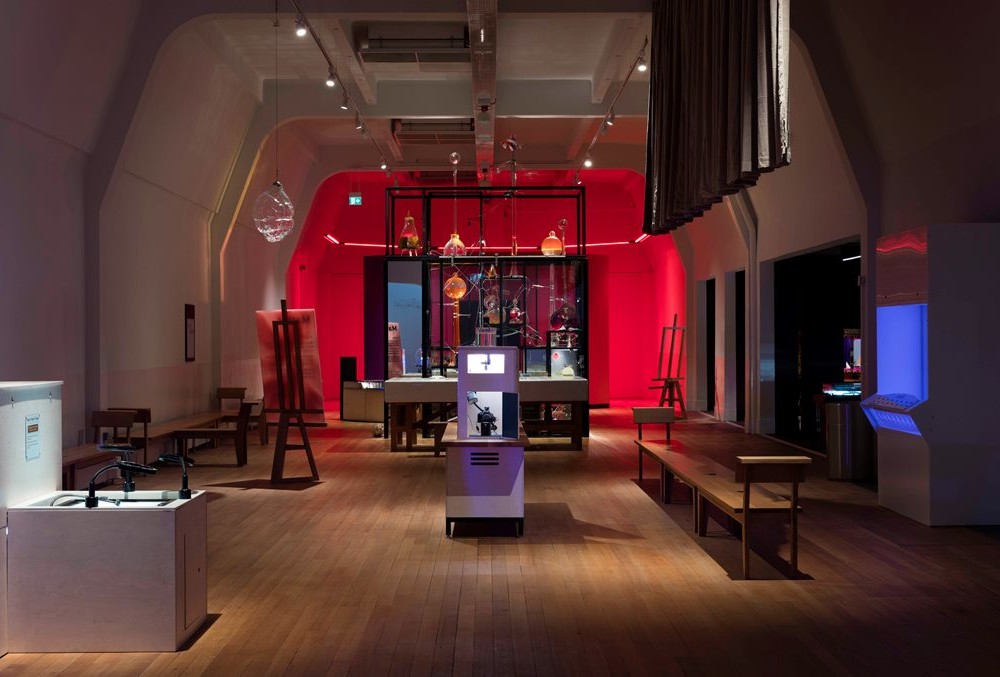 “Long vistas and a lack of rigid demarcation in the space encourage visitors to make connections between the different scientific phenomena and to move freely through the gallery,” say the architects. “Organised with a number of large-scale timber elements including: a Showspace for 120 spectators lined with silver, and its red quilted undercroft making room for two classes of children to be briefed; three playground-style slides which demonstrate properties of friction, decorated with 400 handmade oval samples of different materials and seemingly propped into a flight of stairs; a cage for a Tesla coil; and an eight-metre inhabitable revolving orrery displaying the sun, earth and moon of our solar system.”

muf’s experience of working in the public realm has equipped them to create robust, hardworking spaces which also deliver a sense of grandeur and delight – using unusual materials and specially-commissioned pieces. There is a treasure trail of 25 crystals set into timber benches; tactile waiting rails hand-carved by stone carving students from the Building Crafts College in Bow; 5m oak tree studded with magnets: “These details are a conscious reaction against the generic bright, wipe clean, panelled architecture of many schools and public spaces,” they say.

The new gallery will be followed in December by the £5m Mathematics: The Winton Gallery and then in 2019 by the £24m Medicine Galleries. 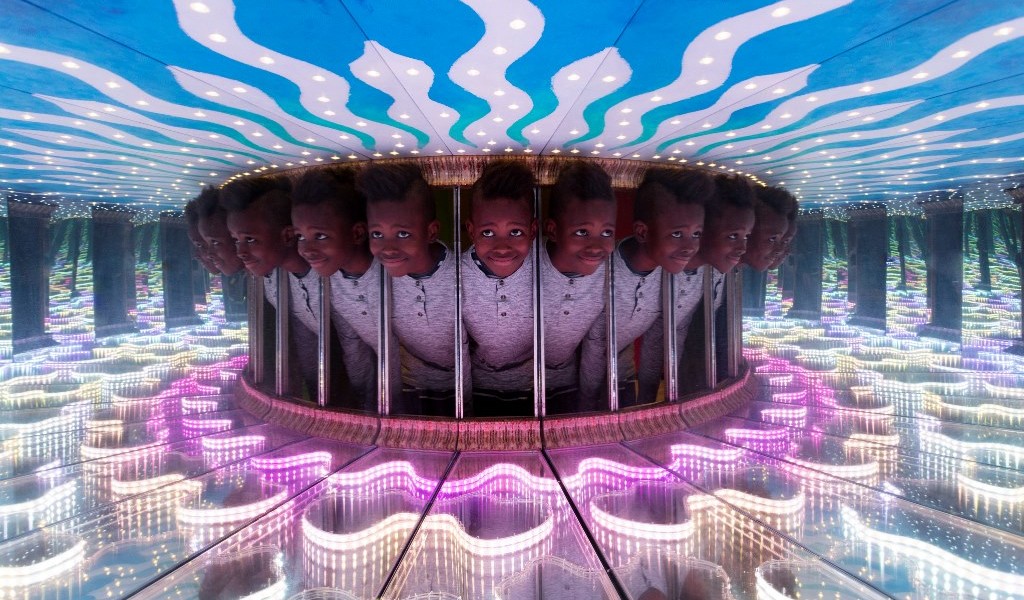 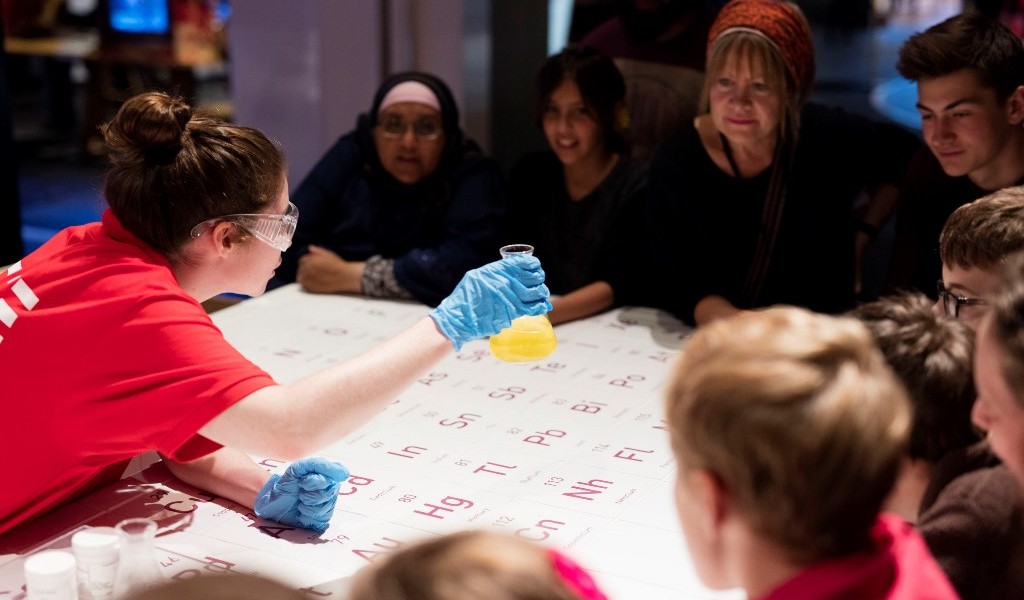 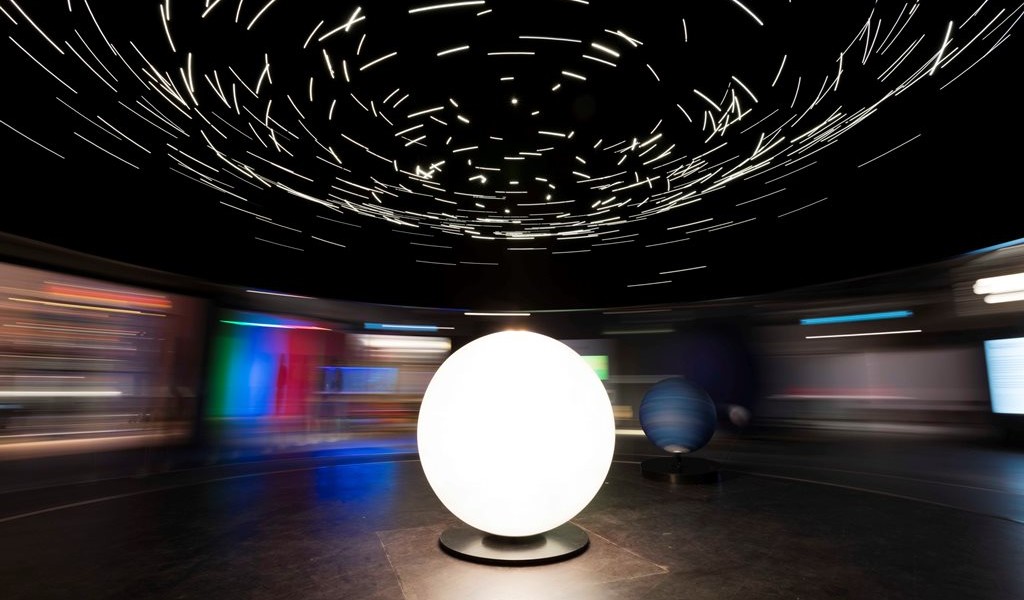 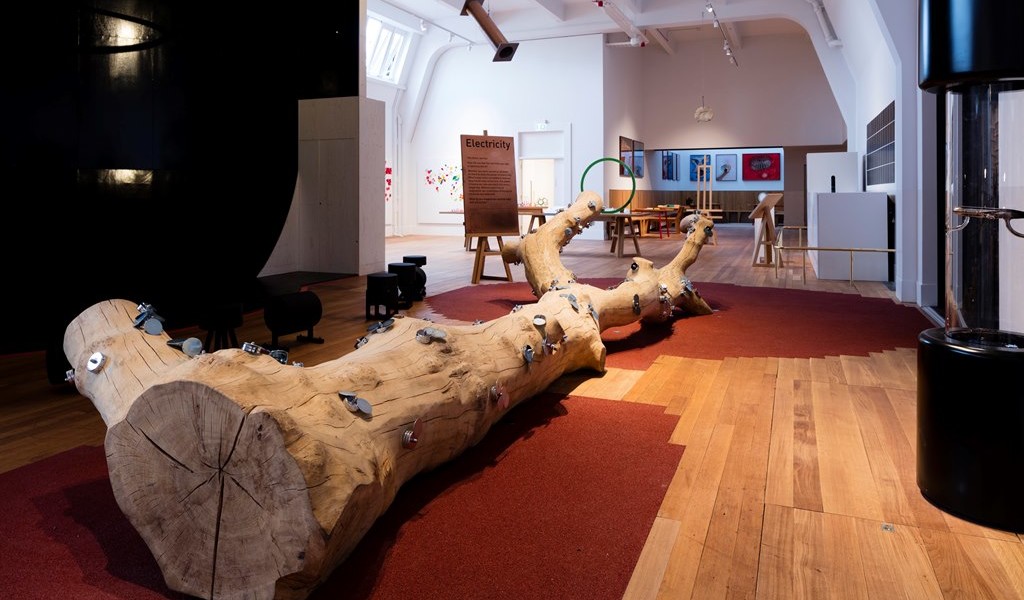 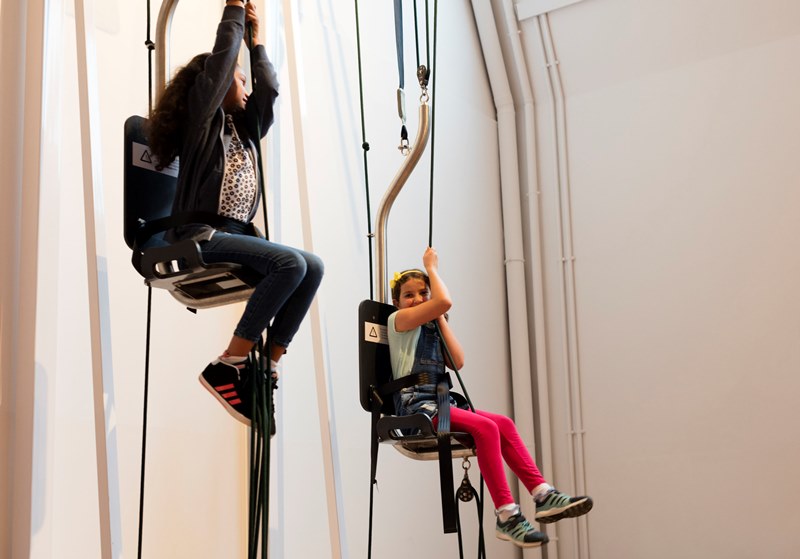 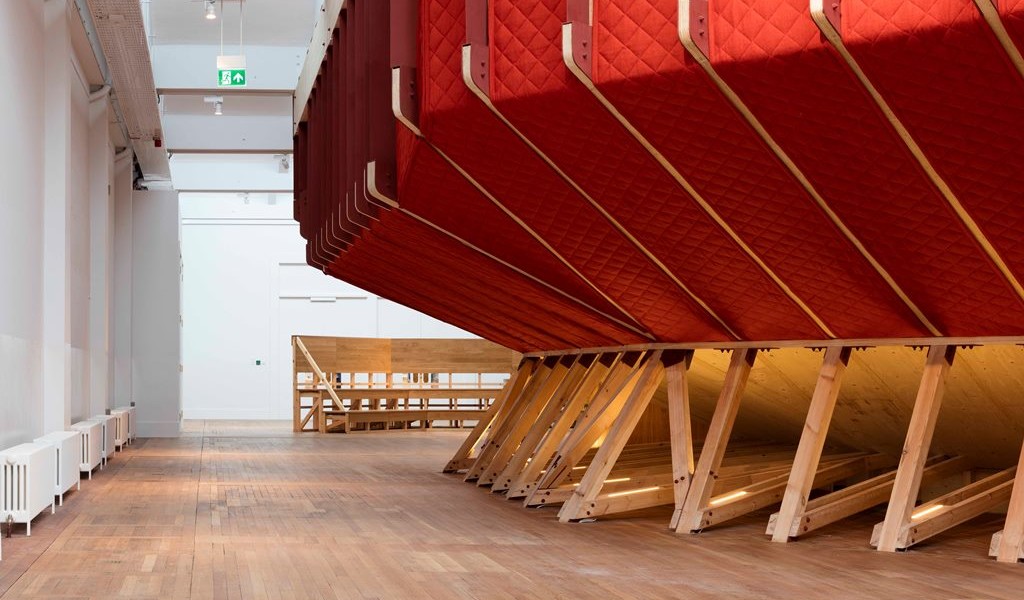 To achieve this rich detail muf worked with a variety of contractors, artists and makers: Romford car sprayer Luke Jones layered the paint finish to the rotation station; a multifaceted concave mirror was made with Will Yates-Johnson; artist Siobhan Liddell was commissioned to produce a set of 13 composite prints exposing mathematics in nature and a companion set of new tessellations; the hood of the orrery, which depicts the 500 stars nearest to earth, was developed with Swedish design practice Front; door handles by Felix de Pass and oversized glass for the Chemistry Bar by designer Arnout Visser, originally of Droog, working with Czech makers.

muf and the Science Museum collaborated with graphic designers Objectif and illustrator Andrew Rae to create the gallery’s texts which extend the open-ended, engaging design approach. Rather than plain panels, the explanatory texts for each zone have been etched, printed or cast into materials which relate to the different scientific themes. Andrew Rae’s skilful illustrations of the instructions and explanations foreground accessibility and a sense of play.

muf also drew on well-known spaces of scientific discovery and learning for the design of the interventions and exhibits – Faraday’s lecture hall can be seen in the show space, the orrery recalls George Wright of Derby’s famous painting, and a visit to the still-in-use chemistry labs in Oxford inspired the Chemistry Bar.

They have even provided dramatic day lit spaces for waiting and eating packed lunches, secret doors to enter the gallery, and throughout places to ponder as well as wonder.

Additional Support: Stavros Niarchos Foundation, the Royal Commission for the Exhibition of 1851, Simon and Kate Reid alongside a DCMS loan