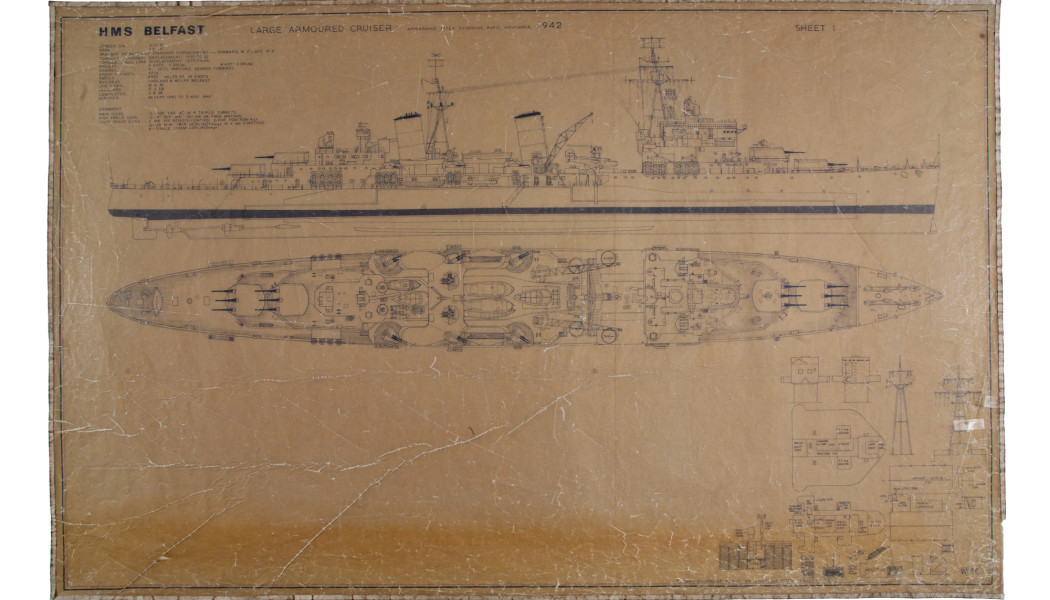 Share
There are over 67,000 items housed in the Brunel Institute at Brunel’s ss Great Britain, making one of the world’s leading maritime collections. The majority of this collection was donated by the distinguished maritime historian; David MacGregor.

David MacGregor was born in 1925. Despite no nautical or boating interest in the family MacGregor harboured a keen enthusiasm for sailing ships. On graduating from Cambridge he worked in an architect’s office in London but devoted most of his spare time to his passion of maritime research.

In 1961 MacGregor’s expertise in maritime history had developed to such an extent that he left architecture and became a full-time writer, plan supplier and painter. His books on ship design and development established him as a leading expert in the field.

These books often included plans that MacGregor had taken from extant vessels, ship models or earlier versions of plans in museum collections. This detailed technical knowledge was more widely shared when MacGregor set up a plans business, supplying plans to model makers and other enthusiasts.

David MacGregor died in 2003 but the legacy of his collection and life’s work continues to inspire, inform and educate at Brunel’s ss Great Britain.

His methodical research notes form part of the collection now in the Brunel Institute and demonstrate his almost forensic approach to detail. There are over 6,500 books and periodicals as well as a total of 7,300 ship plans.

The cataloguing of the David MacGregor ship plans, drawn by MacGregor and by other highly skilled draughtsmen, begun in November 2011, in the Brunel Institute at Brunel’s ss Great Britain, and is still ongoing today.

This project is committed to recording over 7,000 plans held in this important collection.

The plans represent technical developments in shipbuilding over 200 years and changes in hull form and rigging of sailing vessels. Additionally, in many instances, the plans held in the ss Great Britain Trust’s collection are the sole surviving documentation of a vessel. Many were long ago broken up or their hulks are rotting away and disappearing, making the Trust’s collection probably the only source of information of this important part of Britain’s maritime history.

The steps of the cataloguing process are as follows:

Going digital Over 5,500 records have been created to date. One of the key aims for the documentation project is to also make these plans available to a wide range of people.

In order to achieve this, we launched a large scale digitisation effort in March 2012.

Digitisation of the collection is vital as a method of preservation, ensuring there is minimal physical handling of the plans while continuing to provide access for the public. Images of the ship plans are made accessible online, allowing the plans to remain available as working copies for students and model makers but also to remain safe and intact.

While all visitors can currently view any of these plans on demand in the David MacGregor Library, the digitisation effort allows the Trust to offer high resolution digital copies of each plan for a fee that supports the care of the collection.

The Mobile Scanning Company was chosen to undertake this project in the Kirby Laing Room of the Brunel Institute, making the operation visible to everyone visiting the Brunel Institute. So far over 1000 people have visited the open sessions to find out what goes on behind-the-scenes.

Short bursts of digitisation activity allow the team to scan several hundred ship plans for a few days at a time and also continue with the all important sorting, documenting, re-housing and also flattening of the extensive collection of plans.

Catalogued plans are recorded in these sessions which are held every 6 weeks. These images are then linked to the catalogue records on the collections database. With the continued support of the Trust’s committed group of Library and Collections volunteers, who have made a tremendous contribution to the project, the project is now near completion.

Together, the digitisation of the ship plan collection and the opportunity for the public to see this work in action are a vital part of how the Trust is fulfilling its commitment to an open access policy in The Brunel Institute.