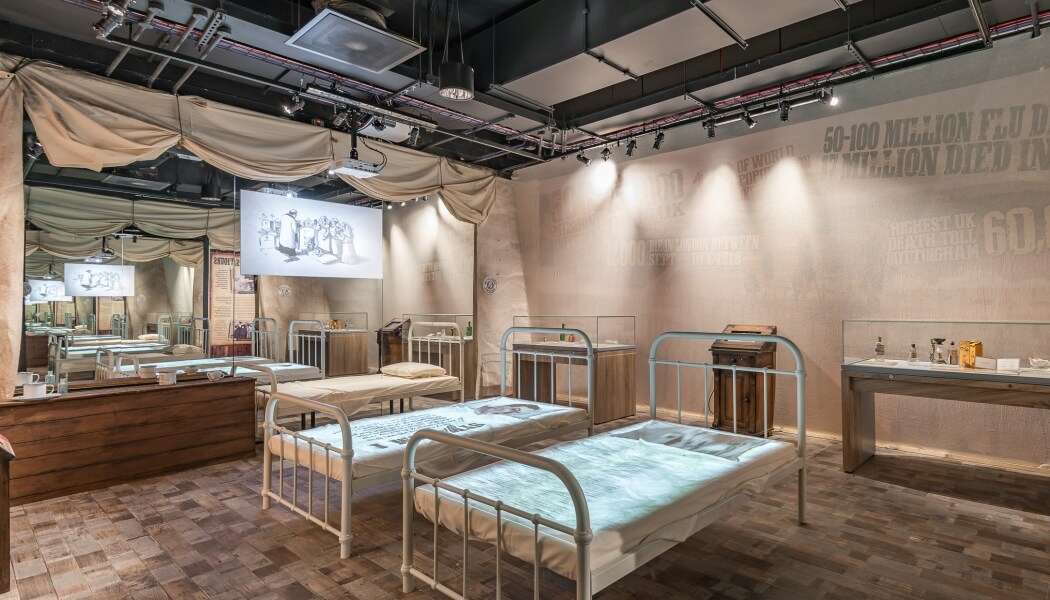 Spanish Flu: Nursing during history’s deadliest pandemic at the Florence Nightingale Museum in London marks 100 years since the global spread of a virus, long forgotten, that claimed more lives than the First World War

The Spanish Flu: Nursing during history’s deadliest pandemic exhibition explores the scale of the 1918 pandemic, which was exacerbated by large scale movement of troops at the end of the war which contributed to the rapid spread of the disease around the world. And it was a cruel twist of fate that as World War I was drawing to a close, this invisible killer became another far more deadly catastrophe than the war itself and swiftly swept across the globe, infecting half a billion people worldwide and killing 50-100 million, including 250,000 Britons.

I hope that visitors to the exhibition come away having learnt about the sheer scale of the pandemic, the devotion of those who cared for victims, and the importance of getting a flu jab

Holly Carter-Chappell, Collections Officer at the Florence Nightingale Museum and curator of the Spanish flu exhibition

Located within St Thomas’ Hospital, the museum uses its expertise, collections and knowledge of nursing to develop a dramatic exhibition using a variety of interpretation, interactives, films and object displays. The exhibition focuses on the critical role nurses played in treating victims, from nurses in the field to ordinary women looking after patients at home and in civilian hospitals. Due to the lack of treatment for the disease, the role of these women was incredibly important, and a selfless act, as many of them contracted the virus themselves.

–           The experiences of both volunteer and professional nurses during the pandemic

Holly Carter-Chappell, Collections Officer at the Florence Nightingale Museum and curator of the Spanish flu exhibition says the museum wanted to commemorate the centenary of the Spanish flu pandemic because it has largely faded from memory.

In 1918 Doctors had little idea of how to prevent or treat Spanish flu, and one of the few things which helped patients recover, she says, was good nursing. In an era before an effective influenza vaccine, antiviral drugs, or even antibiotics; all that could be done was to make patients comfortable, monitor their vital signs, and try to get them take fluids and nutrients. 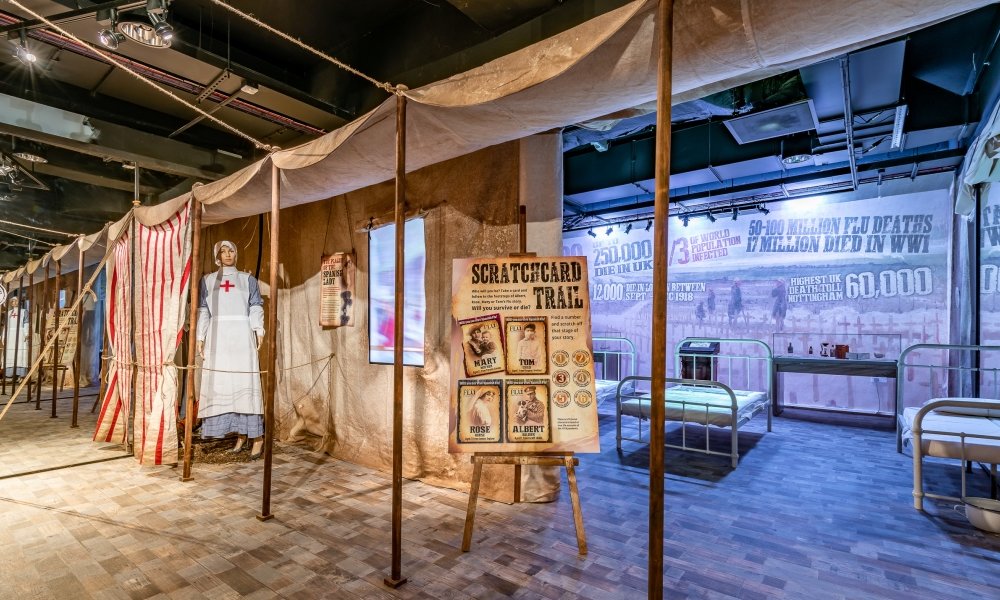 The exhibition design is inspired by the mass mobilisation of tents to cope with the huge numbers of flu cases around the world. There are also several unique exhibits on display, including a rare vial of influenza vaccine created by the Royal Army Medical College in 1919, using Spanish flu-infected lung scrapings.

Although their research has shown that some people tried any treatment they could, including eating kerosene-soaked sugar lumps and injecting themselves with strychnine, a strong poison. This has led the exhibition to also ask the question: could a similar pandemic strike again?

“This exhibition reflects on this largely forgotten historic event and showcases the important contribution of both professional nurses in hospitals and ordinary women at home, in caring for victims,” says Carter-Chappell. “Spanish flu has huge contemporary relevance to us today in 2018, we are still at risk of a devastating flu pandemic of a similar scale to 1918, and with modern air travel the virus could spread around the globe extremely rapidly. We still do not have a universal flu vaccine, so for the first six months of a pandemic, we would be reliant on antiviral drugs, which do not always work. I hope that visitors to the exhibition come away having learnt about the sheer scale of the pandemic, the devotion of those who cared for victims, and the importance of getting a flu jab!”

The museum says that the exact origin of Spanish flu is unknown, but the virus was named as such because of early reports emanating from Spain, which was neutral during World War I and therefore did not censor the press during wartime.

This pandemic was also ruthless as healthy adults, normally unaffected by seasonal flu outbreaks, were at risk with symptoms including delirium, explosive nosebleeds and distinctive blue tinged skin caused by a lack of oxygen as their lungs filled with fluid and pus.

The museum says the scale of the pandemic was so vast that essential public services broke down across the globe, hospitals were overwhelmed with patients, and a shortage of both coffins and gravediggers meant that the bodies of victims could remain unburied for weeks. 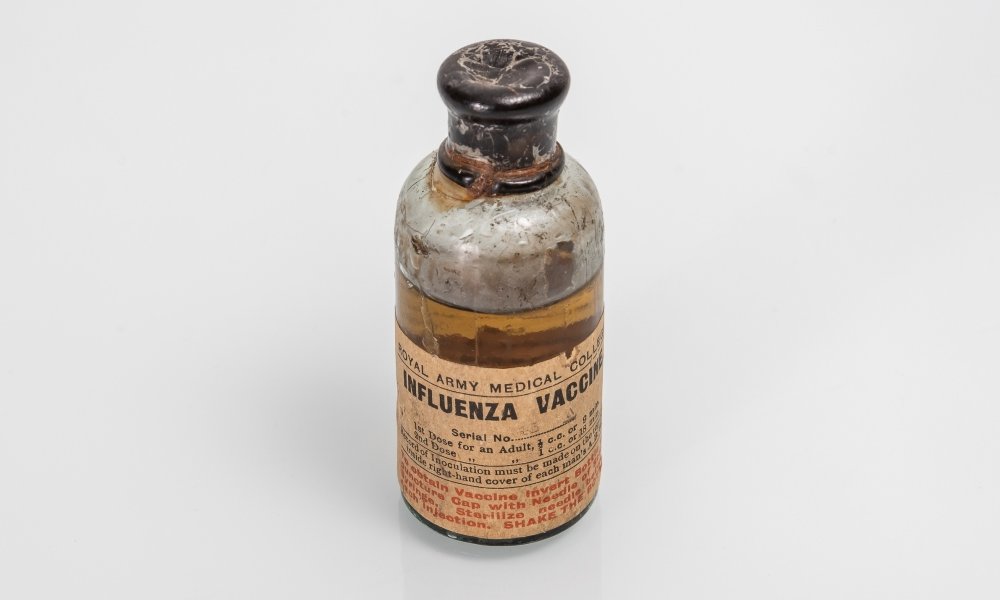 A rare vial of influenza vaccine created by the Royal Army Medical College in 1919. On loan from the Royal Pharmaceutical Society Museum. Credit Thomas Gilder

Joanne Bosanquet MBE QN, Deputy Chief Nurse, Public Health England, said the exhibition is extremely interesting and helps to remind us of the importance of being prepared.

“What this, and the 2009 flu pandemic teach us, is the unpredictable nature of influenza and the need for pandemic preparedness. The NHS and the nursing profession will be at the forefront of any pandemic response. Learning from past experiences is vital to planning and implementing effective measures to protect public health.”

Bosanquet says we know a flu pandemic is a real possibility, which is why we have robust and well-rehearsed plans in place for a number of scenarios. “This includes strategies on rapidly offering antiviral treatment to the UK population and quickly being able to implement large scale vaccination programmes to reduce the impact of the infection.”