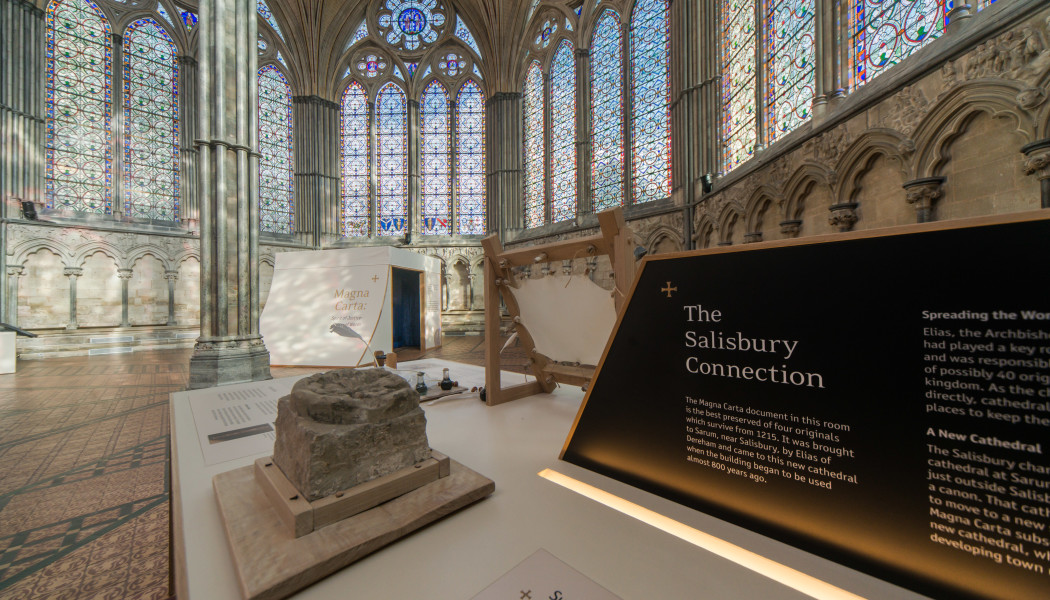 In 1215 the soon-to-be project manager of a new cathedral in Salisbury, Elias of Dereham, who was present at the sealing of Magna Carta at Runneymede, was tasked with delivering at least 10 of the 13 known original documents and brought one to Old Sarum, the precursor to Salisbury Cathedral. When relations soured between the church and the military at Old Sarum, Elias, who had become a Canon there, was tasked by the bishop, Richard Poore, with masterminding the building of the present Salisbury Cathedral (beginning in 1220) and Magna Carta came with him.

“Magna Carta guarantees the freedom of the Church, and has therefore always been very important to the Cathedral. In fact, the negotiations between the king and the barons came about thanks to Archbishop of Canterbury, Stephen Langton, who Elias was a steward to,” says Seif El Rashidi, Salisbury Cathedral’s Magna Carta Programme Manager. “The other connection is the earl of Salisbury at the time, King John’s half-brother, William Longespeé. Longespeé was also present at Runnymede and at the laying of the foundation stones of our cathedral so there is a very interesting link between our specific document, the history of the cathedral and the history of Salisbury.” Magna Carta has rarely left Salisbury since then, one exception was in February when all four surviving copies of the 1215 Magna Carta were put on show at the British Library as part of the 800th year anniversary. 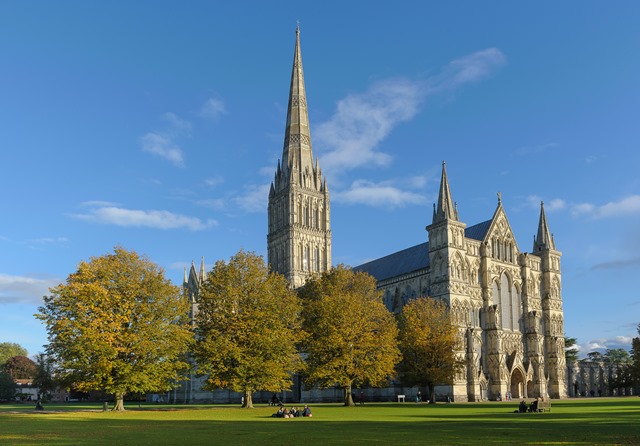 Leading up to this historic year Salisbury Cathedral was successful in its bid for a £235,000 Heritage Lottery Grant to create a permanent exhibition. As part of the preparation for the new exhibition the document itself underwent its first full condition inspection (as reported in M+H Advisor). It was also an opportunity to replace the old frame with its old glass with a new one with special glass to protect it from light. “The old frame was sandwiched between two pieces of glass and sealed in while the new frame is much more like a box and is accessible.” When conservators moved the document from one frame to another it was also a unique opportunity to take a very high resolution photograph. This is currently being turned into a zoomable image that will be installed on to an iPad in the Chapter House and launched in the summer, giving visitors the chance to see the document in minute detail: “you can even see where some of the bits of ink have chipped off and a seed pod is stuck to one of the letters,” say El Rashidi. 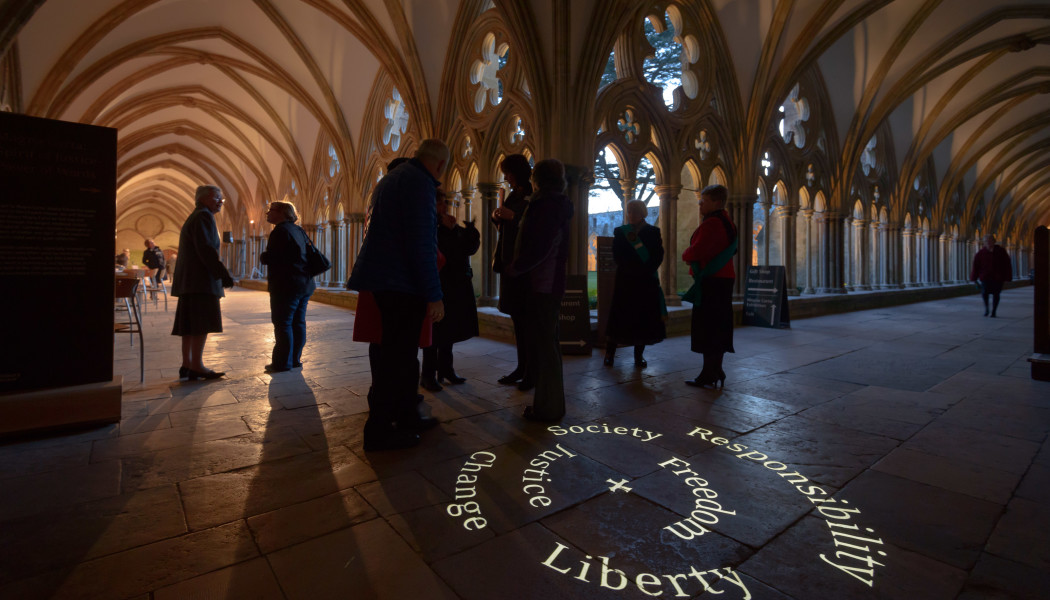 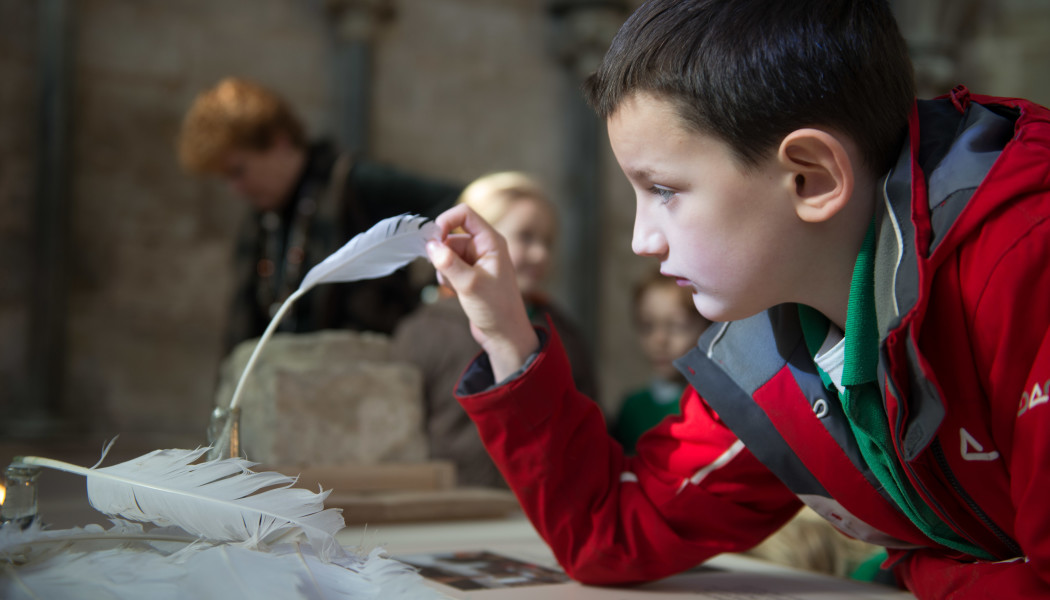 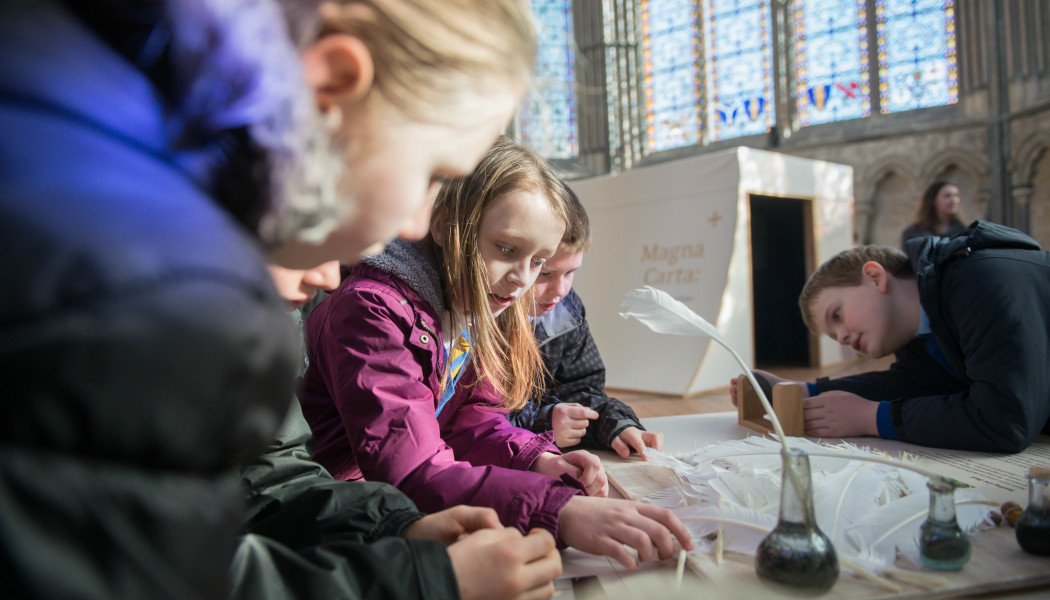 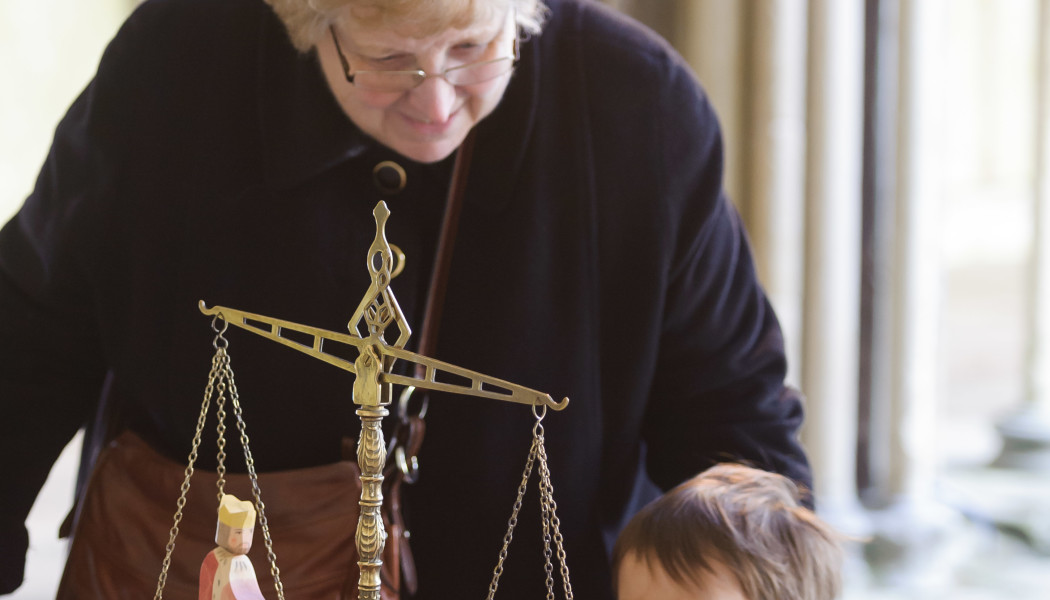 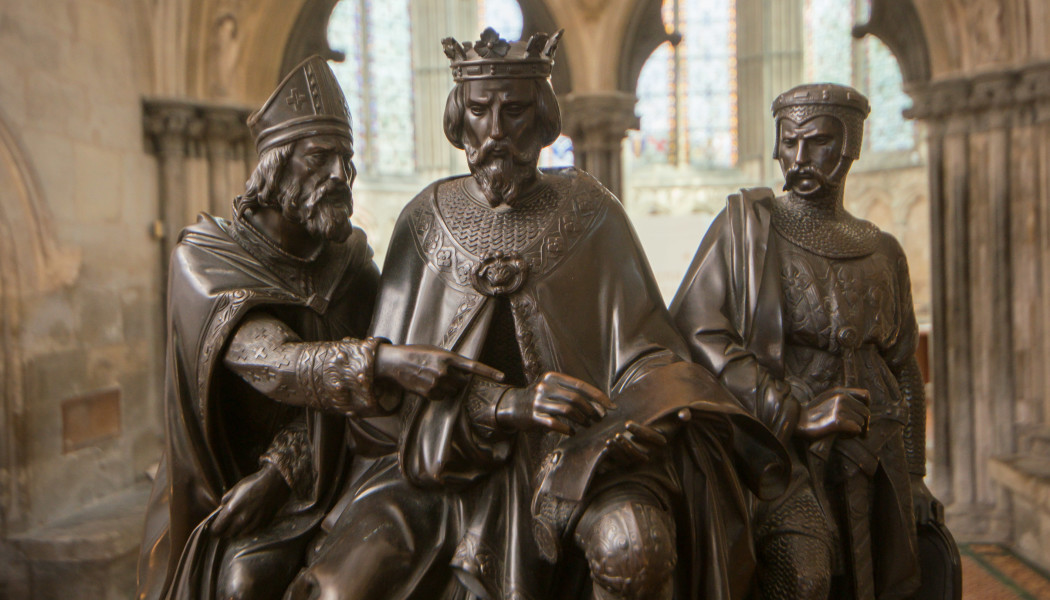 The new permanent exhibition is housed in the magnificent Chapter House within the cathedral cloisters and a special tent-like construction has been built to shield the document from the light from the huge stained glass windows. “Having this exhibition in a Cathedral is a very different experience from going to a museum or gallery, where it is more controlled. Another thing is that our audiences are very diverse. Because it’s a free exhibition, it’s open to everyone so you get people who know a lot about Magna Carta along with those who don’t. That’s quite interesting as we cater to a broad audience, some of whom have limited time but still want to see the highlights and understand what is going on.” A timed ticketing system has been implemented to make sure that in the busiest periods staff can streamline visitors and make sure they all have a pleasant experience.

“The main aim was to put in place an engaging exhibition, Magna Carta – a milestone in history, was on display before but we wanted to think about how to make what to many people is a rather dry-looking document more exciting,” says El Rashidi. “Our overarching objective was to use the document as a centrepiece of an exhibition and use the whole anniversary as an opportunity to engage with different communities and different groups of people regionally, nationally and internationally.” He says that an advantage of having Magna Carta displayed previously was that they were aware of the gaps in people’s knowledge and what they tended to ask about. Popular queries, such as ‘what did the parchment feel like?’, ‘how did they write so small? and ‘what did they write it with?’ have been answered, with the exhibition team delving into the makings of Magna Carta as a 13th century document. Visitors can now touch a piece of parchment that is stretched on a frame, and see the type of pens and ink  used at the time. 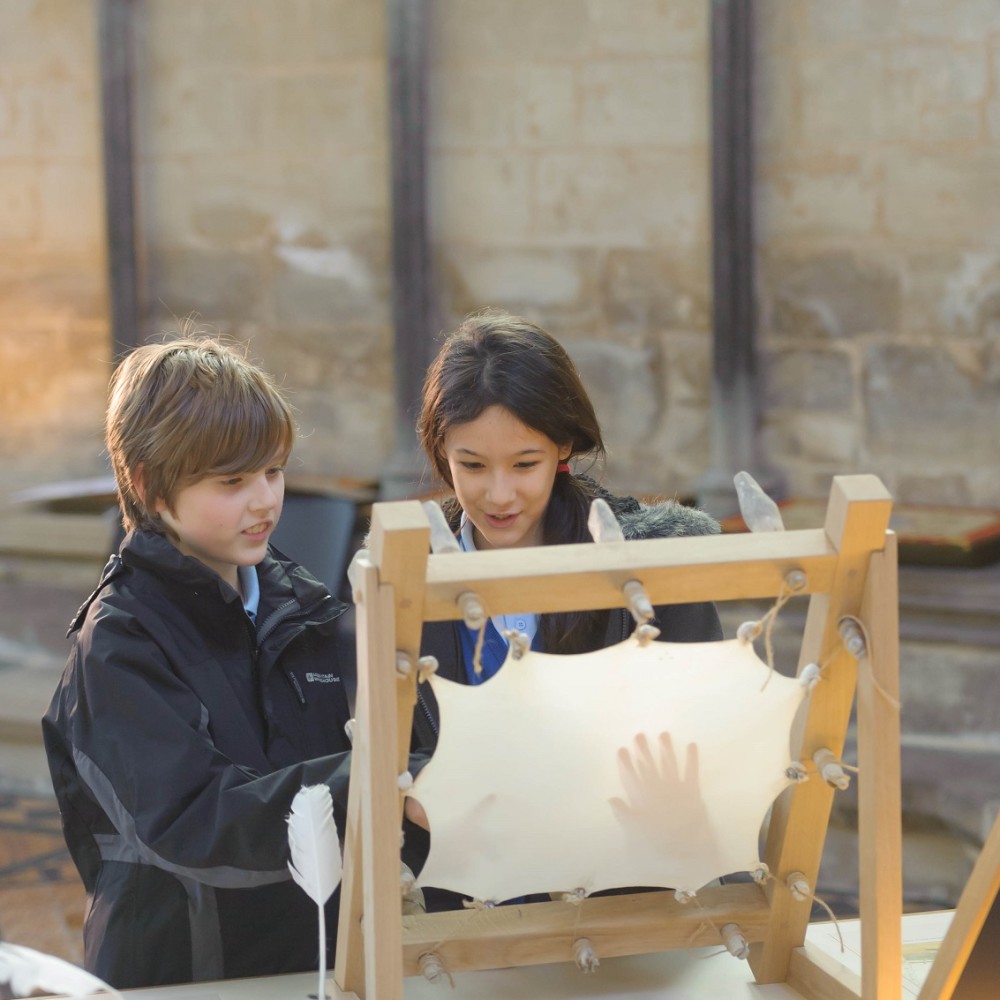 The Salisbury document has been incredibly well preserved in comparison to the other three from 1215. The cathedral also has a register into which the text of Magna Carta was copied out in the late 13th century – indicating the importance of the document to the institution. Some of the documents currently on display in the exhibition include an indulgence granted by the Archbishop of Canterbury Steven Langton offering absolution of 30 days’ worth of sin to anyone who contributed to the construction of Salisbury Cathedral. There is also a document from Edward I with the great seal on it – this is to show what Magna Carta would have looked like with a seal on it (only the British Library’s burnt Magna Carta still retains the remains of a seal – the other three charters have lost theirs).

Having the permanent exhibition in such a historic building brings with it many challenges, including creating an exhibition that has an impact without having an impact on the building itself. And then there’s the functionality of the building – the exhibition team had to install a new heating system and replace all the old heating pipes. “Before you invest in something as important as Magna Carta you want to make sure that the nuts and bolts of the space it’s in are perfectly functioning, so we reconditioned the space to make it fit for purpose,” said El Rashidi. “We had to make sure our intervention complemented rather than competed with the architecture, and that it wasn’t heavy-handed or detrimental in any way.” This included making sure all the displays were low enough so as not to obscure the medieval frieze depicting scenes from the Old Testament that encircles the Chapter House.

The Design and Build of the exhibition was overseen by Haley Sharpe Design (HSD) and given the Cathedral setting, all design components had to be approved by the Cathedral’s Fabric Advisory Committee. Perhaps the two most significant design elements were not technologies as such, but aesthetic principles. These included using display tables within the Chapter House that exposed more of the stunning architecture and enabled groups to circulate around the space more easily,” said Oriel Wilson, Project Consultant at HSD.

“Placing Magna Carta into the tented structure – The Magna Carta Chamber – has had a dual purpose. To control light levels, and to create a greater sense of drama when viewing the document.” 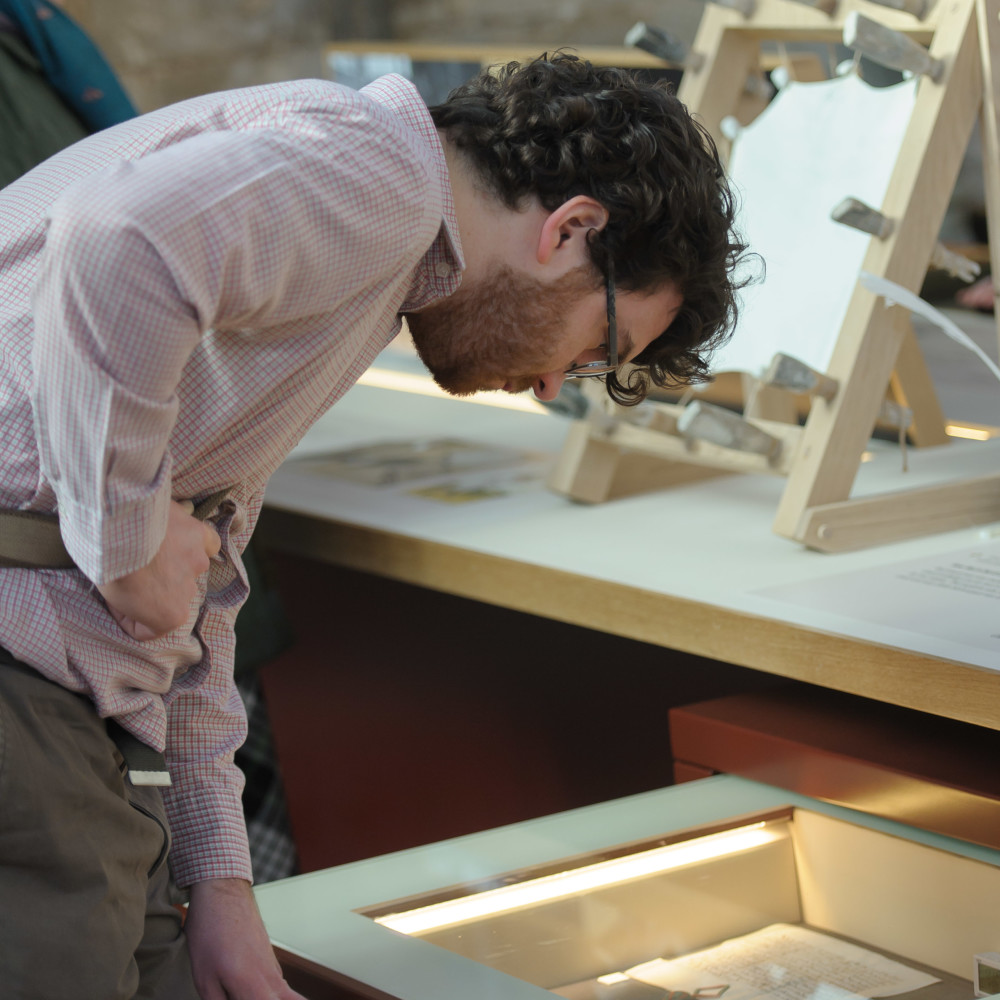 HSD substantially widened the display media used as the previous exhibition consisted of pop up graphics and a display cases only, the current one offers a greater array of interpretative devices from hands-on opportunities, to immersive AVs and digital touchscreens. They also worked with Red Balloon, Bournemouth University’s media company, who provided software design and  actively involved its students in all aspects of the media components from animations to filming, software programming to scriptwriting. Nick Stead – independent copywriter – provided the final exhibition texts, which distilled a complex and wide-ranging narrative into short, readable panels.

HSD also worked alongside activity planners, learning teams and the Cathedral guides to shape design proposals which capture the attention and engagement of the Cathedral’s diverse visitors. “As well as the obvious conservation and interpretation considerations to effectively display Magna Carta, we also needed to think about practical logistics of managing high volumes of visitors within the Chapter House, and providing points of interest around the medieval Cloisters,” says Wilson. “Our approach was to build anticipation through carefully placed exhibit components, around the Cathedral, Cloisters and Chapter House, effectively taking visitors on a journey.”

To complement the new exhibition space and celebrate the 800th anniversary of the signing of Magna Carta the Cathedral has also organised a host of events including a Gala Concert on 13 June, a community pageant, contemporary art installations, theatrical performances, and a week-long flower festival (15-20 September 2015).

Levy Restaurants champions our heritage through its tearooms at historic locations