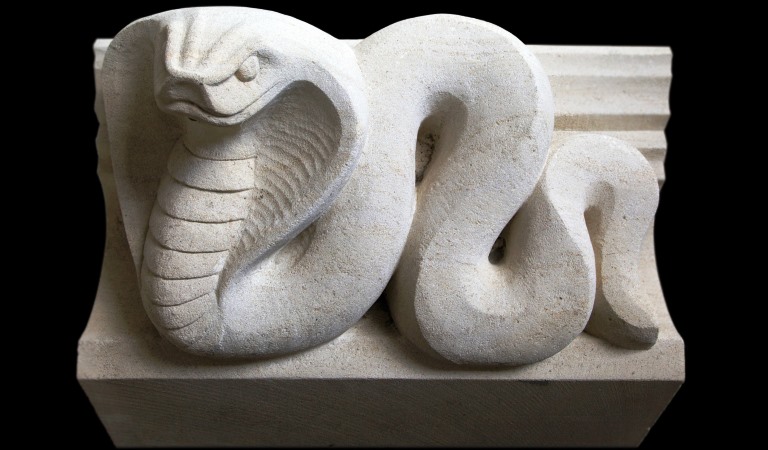 The Queen’s Free Chapel of St George in Windsor Castle is the spiritual home of the Order of the Garter, which was founded by Edward III in 1348 writes Martin Ashley LVO Surveyor of the Fabric at St George’s Chapel and Principal at Martin Ashley Architects

Millions of people are familiar with today’s St George’s Chapel, which was begun by Edward IV in 1475 and completed under Henry VIII in 1528.

Yet, rather than being preserved in aspic, the building continues to evolve under the careful ownership of the College of St George – the religious body established to serve the chivalrous order. A newly installed series of imaginative grotesque sculptures is a wonderful showcase of contemporary stone carving and design, and an excellent example of the Dean and Canons of Windsor’s far-sighted approach to their stewardship of this remarkable building.

Protecting St George’s programme of worship and prayer, is a striking series of stone grotesque sculptures on the building exterior. Because of their elevated and exposed positions, they are vulnerable to weathering and have been replaced over the centuries, most significantly during the 19th century. Numbers of Victorian replicas of the medieval originals have in turn become badly damaged or decayed. 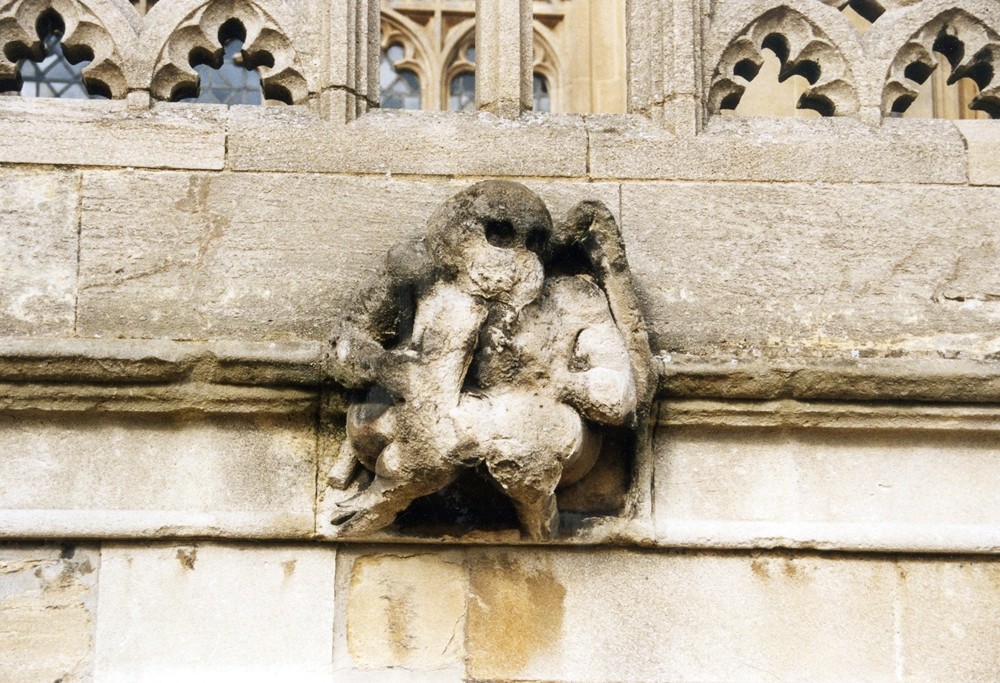 In a courageous and inspired move, the Dean and Canons commissioned the students of the City and Guilds of London Art School to supply new grotesques. And in doing so they initiated a programme that, rather than attempting to re-create replicas of Victorian grotesques which are themselves replicas, instead continues a 650-year old sculpting tradition at the Chapel through an ‘Imaginative Carving Programme’ of contemporary sculpture. Just as importantly, the project is an opportunity to develop the skills and expertise of a new young generation of carvers, and to help ensure the survival of exemplary sculpting skills and techniques for the future.

“An early stage in the process for each annual intake of students is an introduction to the medieval carving tradition and its liturgical context at St George’s Chapel. From the outset of the carving programme, the St George’s Chapel Fabric Advisory Committee advised the Dean and Canons that producing imitations or interpretations of the Chapel’s existing Victorian grotesques would not produce sculpture to a standard matching the outstanding medieval carving tradition within St George’s.

For this reason the Dean and Canons have encouraged the students to stretch their imaginative muscles – and their skills – to produce sculptures that are spirited, and unmistakably contemporary. Just as the original carvings within the chapel are bold, audacious and full of life, so should their replacements be lively pieces that continue the spirit of the stone carving tradition at St George’s Chapel. 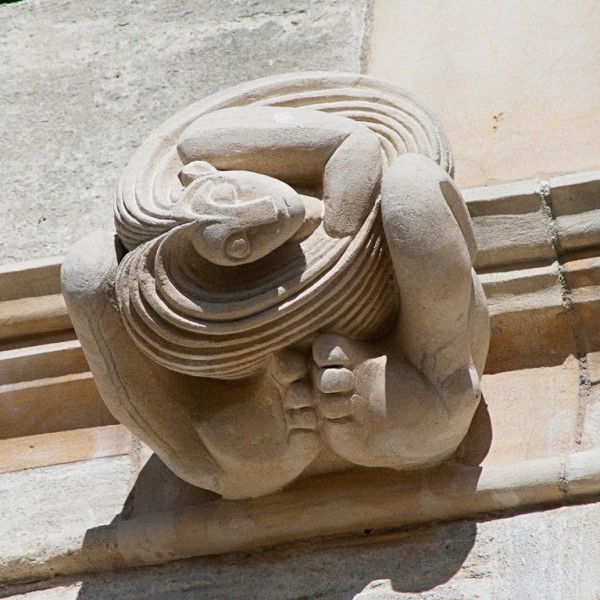 This instruction from the College was not without its risks – St George’s Chapel is recognised as being one of Europe’s outstanding examples of late perpendicular architecture, and is therefore afforded the highest degree of protection as both a Grade I listed building and being part of the Windsor Castle Scheduled Ancient Monument. However, thanks to the enlightened approach from the Dean and Canons, members of the St George’s Chapel Fabric Advisory Committee, and the Principle and tutors of the City and Guilds of Art School, the results that are being produced are remarkable.

Freed from the constraints of historic reproduction, the students have instead brought much of themselves and their diverse backgrounds to the work. The School’s multicultural student profile has brought designers from across the world to the project. The medieval bestiary of contorted beasts has given way to a rich 21st century menagerie including a cobra, phoenix, pelicans and an octopus. Even a lab rat – carrying an artificial human ear – is represented here. Beasts such as a lion or chameleon are re-imagined with a cubist twist. A menacing behemoth devours part of the building, and an impish face peers out from a parted cornice. 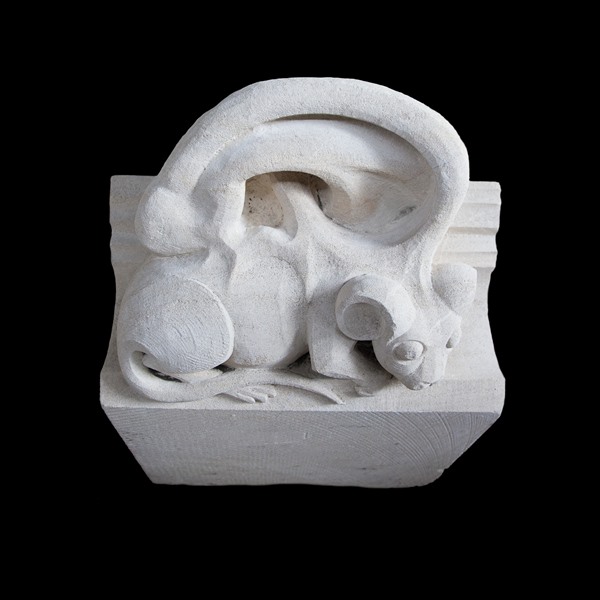 Nature has inspired other gentler carvings, for instance a clutch of mushrooms and a horse chestnut branch, which are beautifully and tenderly executed with the same skill and eye for detail as the 15th century natural forms found carved inside the Chapel. Elsewhere the building has demanded a pair of grotesques clasping a pilaster, and so to one side we find a Pied Piper, and to the other side, a choir of rats.

The first three new imaginative sculptures were presented to the Dean and Canons of Windsor in 2006 and installed on the Chapel that year. Since then, the City and Guilds Art School has produced nearly forty new grotesques. These are gradually being installed as the external stone conservation programme progresses and funding is made available to replace carvings which are so decayed that they no longer serve their original liturgical purpose of defending the sacred space within, against the tribulations and chaos of the secular world without.

Nineteen new sculptures have been installed on the Chapel so far, with thirteen inserted on the South Front last year. The carving programme continues, and it is thanks to the generous support of benefactors inspired by the imaginative carving initiative that the Dean and Canons have been able to promote this wonderful programme in partnership with the City and Guilds of London Art School and under the leadership of Canon Steward. 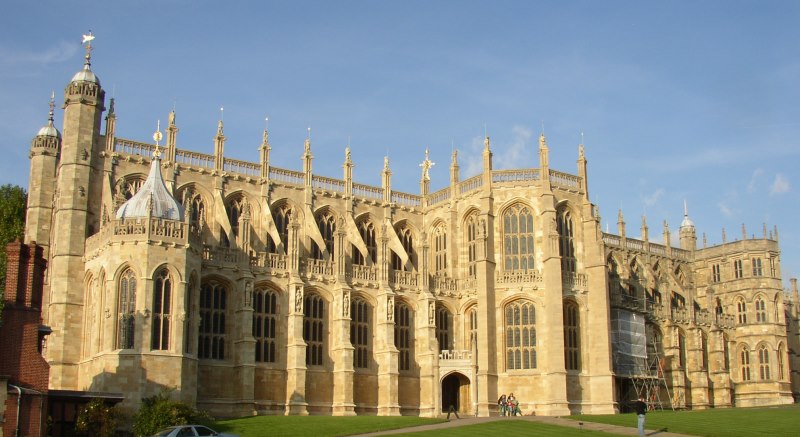 As Surveyor of the Fabric to St George’s Chapel and the College of St George, it is my privilege to assist the Dean and Canons of Windsor in this initiative, and work alongside a highly talented team of advisors and craftspeople.

I have long known that to act responsibly in the context of remarkable buildings such as St George’s Chapel, it is essential to look into the past to understand the spirit of their genesis, and how they have evolved to come to us as they are now, and also to look into the future to consider how our work now will endure and be regarded by those in generations to come.

This project, and through it the ability to help develop perception, skills and imagination in a new generation of craftspeople, is a fine example of the patronage crucial towards the ongoing benefit of buildings such as St George’s Chapel.