Staffordshire Hoard: The making of an exhibition

How do you display one of the most important finds of Anglo Saxon treasure ever discovered when that treasure is all in small, broken fragments?

This was the key dilemma facing Real Studios in the creation of a permanent display for a large proportion of the 4,000 item Staffordshire Hoard collection for Birmingham Museum and Art Gallery.

The Staffordshire Hoard, discovered in a field near Litchfield by amateur metal detector Terry Herbert in 2009, is a stunning collection of fragments of fine gold and silver decorative metalwork apparently ripped from swords, shields and helmets and then buried during the rule of the Mercian kingdom over Southern England, between AD 650 and 670. 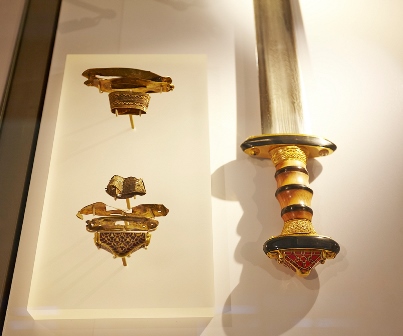 Real Studios director Yvonne Golds said the collection, valued at £3.29m made people have the expectation of seeing treasure but the pieces are tiny.

“What we have done is focus on the mass of the find and place the conservation story central to the space,” she said.

Set within an elegant parquet-floored listed gallery in the Birmingham Museum and Art Gallery, the centrepiece is a large white ‘conservation table’ where fragments are laid out in abundance.

The table frames the drama of this extraordinary find within the context of the extensive scientific and archaeological research that went into revealing its secrets – an investigation that will continue for years to come. 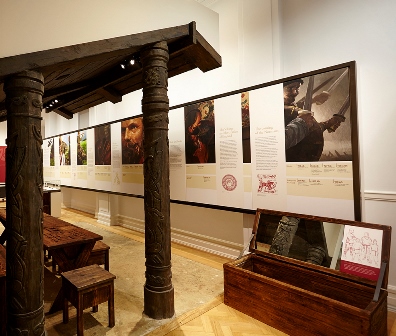 Exhibits are grouped according to their materials (whether gold, silver or horn), the life and likely usage of the objects, and their careful analysis and categorisation by conservators.

Interactives allow visitors to explore a database of pieces and their decoration, while captions relate the elaborate and painstaking cleaning, logging and categorisation process following their discovery.

Key hoard pieces are placed alongside whole replicas, together with a real Anglo Saxon sword loaned from the British Museum.

Around this table, as well as within it, Real Studios has organised a rhythm and variety to the displays to assist with pacing and clarity, allowing visitors to zoom out or in on each aspect of the story, as they wish.

For example, the exploration of larger narratives on Anglo Saxon life and culture are displayed along a large stretch of wall, accompanied by vivid illustrations and A/Vs.

Then three freestanding enclosures act as microscopes, immersing the visitor in detailed and specific elements of the story. 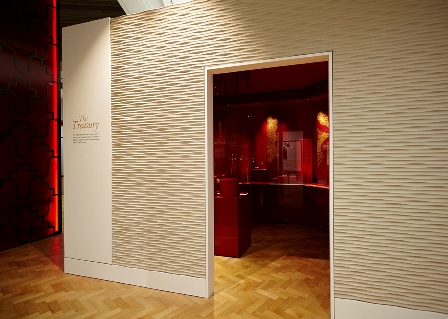 There’s a ‘jewellery box’ structure, which hones in on the magnificence of the best pieces against a garnet backdrop and the fine craftsmanship used to create these pieces is revealed in another enclosure.

With staged models demonstrating craft techniques such as filigree metalwork; a replica of a Mead Hall reveals where the aristocracy of the time would have feasted and displayed their wealth.

Complete with sound (allowing visitors to hear ancient English as it would have been spoken) and the luxurious textures of two replica wall hangings created by local members of the Embroiderers Guild, especially for this exhibition.

Without interfering with the structure of this listed gallery, Real Studios has enhanced the period atmosphere with decorative motifs taken from the objects themselves and used as graphic icons around the space.

A large, illuminated light box stretches up from the end of the conservation table and extends through the gallery, featuring cloisonné patterns which reproduce the elaborate decoration found on some of the hoard pieces, against a glowing red backdrop.

An elegant screen at the entrance features a fretcut metal pattern inspired by one of the garnet pieces.

In all, the exhibition creates a fitting home for a find that has been hailed by heritage experts as of equivalent importance to the discovery of the Lindisfarne Gospels or the Book of Kells. It is set to become a major destination on the region’s historic ‘Mercian Trail’.

Andy Horn, exhibitions manager at Birmingham Museums praised Real Studios’ ‘flair, attention to detail and exceptional commitment to the process,’ in the design and installation of this ‘stunning gallery’. 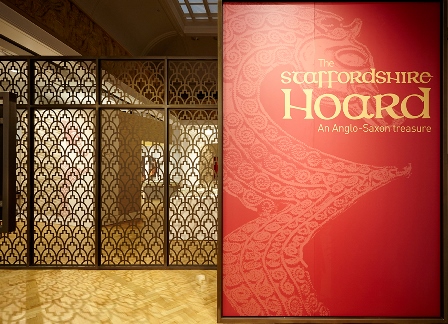 He said: “The Staffordshire Hoard Gallery enables us to engage visitors of all ages in telling the unique story of the hoard, and it has found a fitting home.”

The Staffordshire Hoard exhibition is free to view.