The Brunel Institute – a national institution

After an extraordinarily long working life as a Victorian passenger ship, her final journey was in 1937 when she was abandoned in a remote, windswept bay called Sparrow Cove and scuttled to the shallow sea bed. Although the future of the ss Great Britain looked bleak, naval architect – Ewan Corlett – made it his mission to organise a rescue that would return the ship to the UK. After an incredible journey across the Atlantic towed on a pontoon (Mulus II), she was brought home to her original birthplace in Bristol and to the dry dock that Isambard Kingdom Brunel had originally built for her construction, on July 19 1970, exactly 127 years since her launch.

Brunel’s ss Great Britain is a now an award winning visitor attraction and museum, and the ship has been conserved for the enjoyment and education of all. Alongside Brunel’s engineering masterpiece is the Brunel Institute, which opened in November 2010 and houses one the UK’s finest maritime collections.

Visitors to the Brunel Institute can access objects held in the Vault and use the specialist David MacGregor Library free of charge. This includes the collection of distinguished maritime expert David MacGregor, plus the National Brunel Collection – a collaboration with the University of Bristol. It is also the centre for the ss Great Britain Trust educational programmes.

The Trust collections have developed and continue to be enriched through several acquisition methods, mainly donations and purchases but also loans.

The 67,000 objects in the collection represent the story of the ss Great Britain as well as the life and work of Isambard Kingdom Brunel. Collections have been significantly enhanced by donations, with noted bequests from those of the distinguished maritime historian David MacGregor and maritime author Sir Robert Wall. The MacGregor and Wall material alongside existing holdings cover an impressive range of maritime subjects, ranging from deep sea sailing ships through passenger liners to coastal craft, and including shipbuilding, the shipping business, seamanship and marine engineering. Naval history, architecture and shipbuilding are also included, as well as maritime archaeology.

In the two years since the opening of the Brunel Institute, the Trust has welcomed some true treasures from members of the public who have generously entrusted it to care for research, and make available original objects and documents.

The Trust actively monitors and pursues acquisition of items that may come on sale on the internet or at auction houses whenever possible. Competition can be fierce; external grant aid has allowed it to acquire unique material which enhances the collection such as the 1812 drawing of a rocking horse by a six year old Isambard Kingdom Brunel. 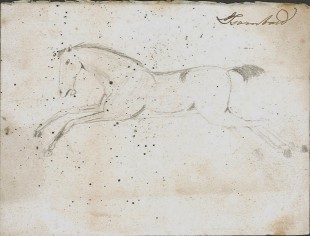 Two examples of such donations are the magnificent Great Eastern Nautilus Shell, and also letters and documents of 1852 passenger William Rance.

One of the most significant long term deposits is that of the University of Bristol Brunel Papers. The Collection comprises over 8,000 individual items and it is the most important collection of Brunel-related material in the world, and includes letters, sketch books, large-scale plans, diaries, calculation books, drawings and drawing instruments.

When material cannot be permanently offered to the Trust, loans allow us to further enhance our understanding of the ss Great Britain and Brunel. It also means we can offer the general public access to objects and documents – quite often for the first time.

We have launched two initiatives which open up the archive and conservation process to the general public. Archive in Five has been augmented with the ‘Conservation in Action’ Friday lunchtime events where staff and volunteers show visitors how they care for objects. During these open sessions our curators and volunteers choose objects that have special significance, relating perhaps to the time of year or topical events. These informal sessions provide an introduction to the collection and have often led to new donations being made.

‘Taster tours’ also provide a fascinating glimpse into the collection. These events are offered to those interested in seeing the research and archive that goes on behind the scenes at the ss Great Britain Trust. A large part of the archive is also available online.

Leaving a legacy – education at the Brunel Institute

The ss Great Britain Trust aims to inspire a generation to learn more about the science and history of Brunel’s great ship. Current education programmes based in the Brunel Institute and Medlock Education centre include; The Future Brunels, Brunel Badge Workshops and Loan Box Scheme, The Golden Ticket and Sea Hear storytelling for pre-school children. Alongside these services a brand new Arts Council funded initiative will launch in early 2013. ‘Museums and Schools’ is a partnership between Brunel’s ss Great Britain and the Science Museum. It has been launched in order to increase engagement with culture by key stage two and key stage three students in underprivileged schools.

Another extensive project launched by the trust in 2013 will be based entirely on Brunel. Funded by the Arts Council, a strategy review will be conducted by historian and one time ss Great Britain Trustee, Dr Helen Doe, who will carry out a survey of Brunel artefacts, collections and sites across the country. This will enable us to create a picture of surviving Brunel-related objects, and establish the state of current research into the great man’s work. As well as carrying out this nationally important research, Helen will also assess our collections, uncovering any gaps in the existing records and identifying ways in which the collection might be enhanced. The results of the research will be disseminated to the wider museum, heritage and research communities.