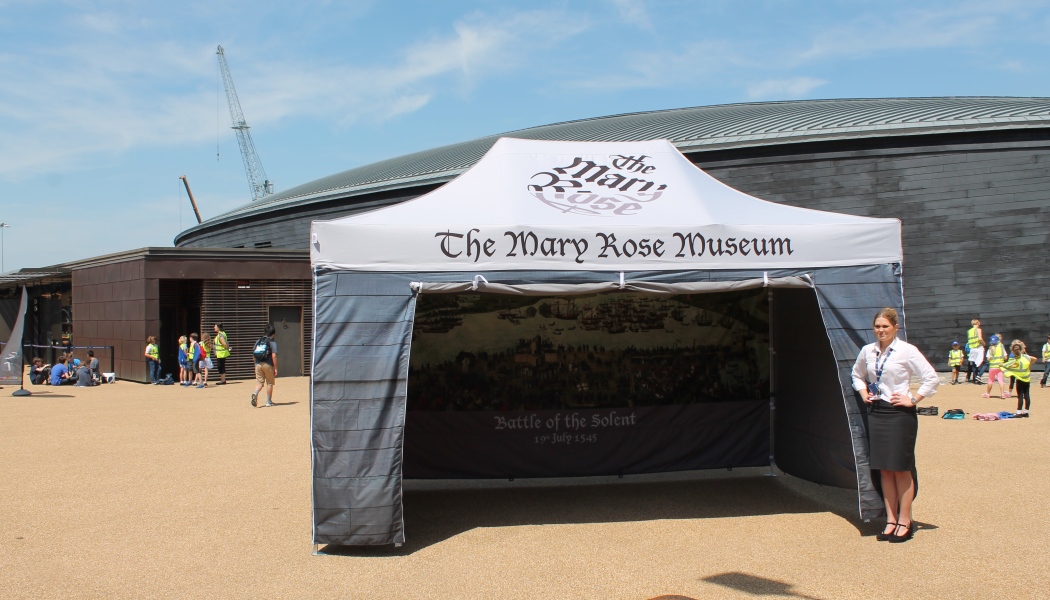 The Mary Rose Museum: Touring the UK with a pop-up museum

The Mary Rose Museum has been taking a pop-up museum around the UK, visiting festivals and historical events with real and replica artefacts, activities and even a small shop as it enters Phase 2 of its development, which will see the museum temporarily close at the end of November

Phase 2 of the Mary Rose Museum build will improve the visitor experience by providing uninterrupted views of the ship from the walkways as well as from the end galleries at all three levels, which means the main museum will close from 30 November until the summer of 2016. So the team were given the task of finding ways in which to keep the museum in people’s minds while the work is carried out. Since opening in May 2013 the museum has welcomed 980,000 visitors and the question was ‘can we keep the interest going while closed’?

“We began to discuss this in the spring time and started with a blank piece of paper and a pot of coffee and thrashed some ideas out,” said Paul Griffiths Head of Operations. “One idea was to have a tent shaped like the museum, so we could literally pop up for short periods of time and also attend festivals. So we contacted companies that made tents to design it.”

The team eventually found a manufacturer and the total cost for design and delivery was £1,600. It was funded by the Mary Rose Trading Company, which also owns a white transit van – bought for transporting items from its warehouses to the museum – which the team have been using to travel to venues. “It’s a cost neutral project as we are using our own staff and vehicle and sometimes we pay to attend a festival or event and sometimes we are being paid,” says Griffiths. “It is an exercise in brand-building and broadening the knowledge of the museum and the conservation programme, not through traditional markets, but markets and places where people have not come across us before.”

The pop-up tour was launched at Chalke Valley History Festival in June, and was followed by a stop at the Tewkesbury Medieval Festival in July and more recently the Victorious Music Festival, Southsea in August. Future plans include The International Living History Fair, Coventry in October and Stansted Christmas Fayre at Rowlands Castle in November. “The great thing about this is that we can get lots of people involved and the audiences we are reaching is demographically wide,” he says.

It also means the Mary Rose team can set up its own shop and sell its wears from the Mary Rose gift shop including books, mugs, Mary Rose Airfix kits, t-shirts, and its own bottled Mary Rose 1545 beer. “We are keeping the museum alive and meeting new people to get them inspired by what is happening in Portsmouth and get them to come and see the Mary Rose for themselves.” 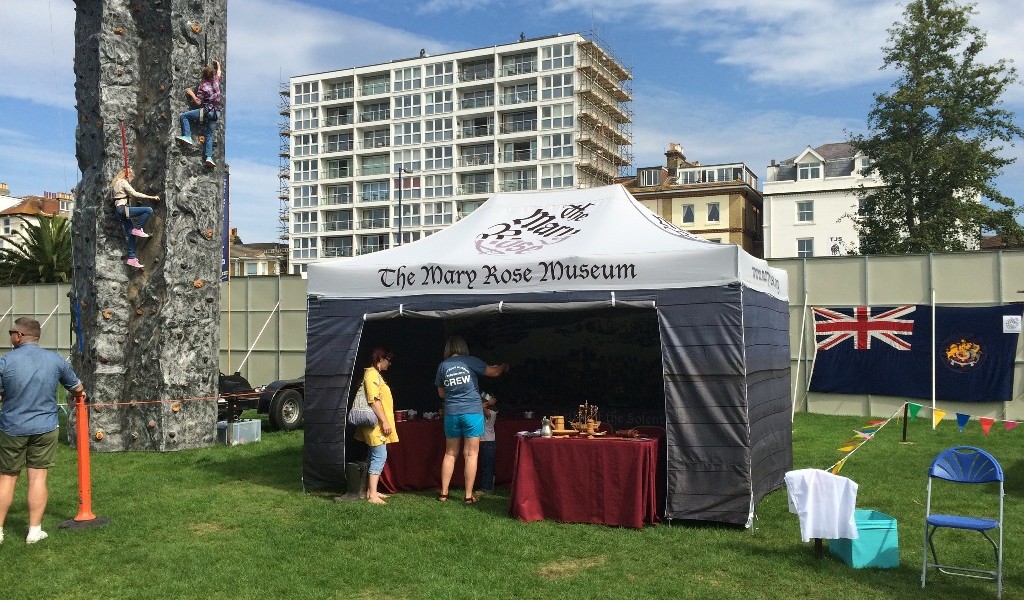 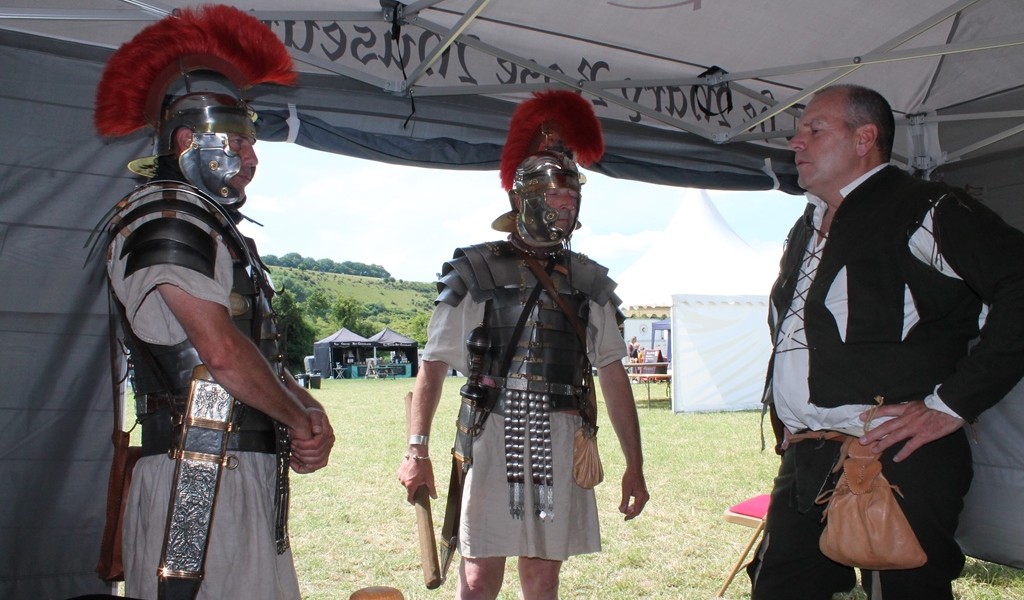 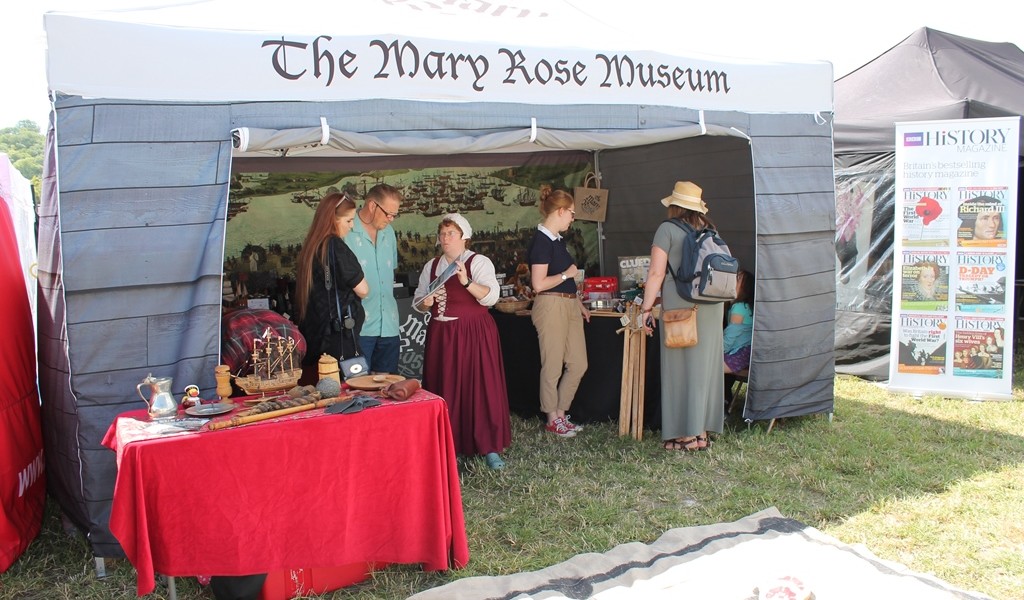 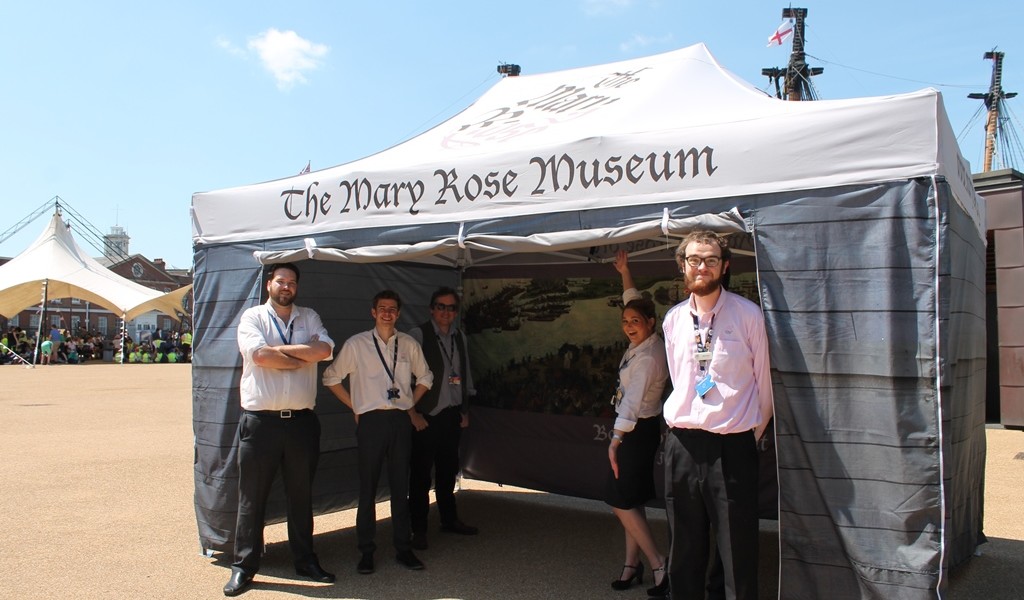 When the museum opened in 2013 the conservation team stopped spraying the Mary Rose and now it is drying, visitors can look through windows overlooking the ship, but when the drying is complete in autumn 2016 there will have been a big transformation.

The lower two decks will be fitted out with sheer glazing walls, which will allow visitors to see the ship in a new unhindered way. The upper level will have an air-locked room where up to 20 visitors at a time will be able to stand in the same environment as the ship, which will be the ‘wow’ factor of their experience.

“We have organised the pop-up museum for a specific reason and I think if we were doing this as part of a normal touring exhibition then we would never have come up with the idea. But it’s amazing how much interest we are getting, so from that perspective it’s very successful.”

This means more new and potential venues are popping up all the time and Griffiths says that one of the challenges can be to find the staff needed to manage the busy pop-up museum. A minimum of four staff are required; someone to run the shop, a person to talk to visitors about the conservation and developments, venue hire and the schools programme and another to look after the replica artefacts, where people can get a taster for the real thing at the museum. As well as this, the team have had to provide health and safety assessments for each venue and have had to reassess their driving policies to make sure that the working and driving ratio of the staff is safe.

“What has been a real boost has been to get the pop-up museum tent started with the museum still open so people can see it before its closed,” says Griffith. “Some people have told us they visited the site 20 years ago, some are very well-informed about what is going on and others just haven’t had the time to visit.”

“The main point is we are meeting new audiences and getting our message out there, the music festivals are completely different, but it’s a festival feel and both adults and children are interacting with the team.”

Griffiths said his pop up spreadsheet is constantly being updated and by the time the museum closes in December it will have welcomed a million visitors and the pop-up museum will be doing its best to entice the start of the next million.