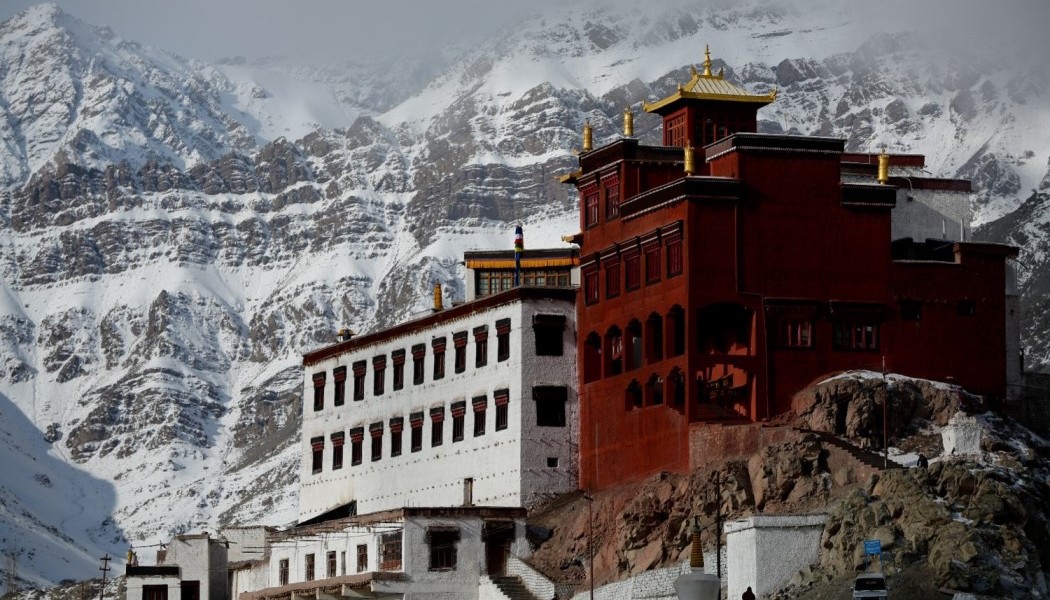 The Matho Museum Project: building a museum on the roof of the world

The Matho Museum is an under-construction museum perched 3,800m in the Himalaya mountain range in Ladakh in the Indian state of Jammu and Kashmir and is a collaboration between the Buddhist monks, local villagers and conservators and experts from Asia and the west

The Matho Museum sits alongside the Matho Monastery founded in 1410, which is home to a collection of thangkas (a Tibetan Buddhist painting on cotton, or silk appliqué, usually depicting a Buddhist deity) dating back to the 14th century. The aim of the museum project is to revive and protect the Ladakhi culture and restore and conserve the precious artworks, objects and documents and give them the security and visibility so that they can be better understood and saved for future generations.

This project was conceived in 2011 when The Matho Monastery wanted to save its collections and asked Himalayan art restoration expert Nelly Rieuf to manage the project after she had finished the restoration of mural paintings in Nepal. The €300,000 project is a collaboration between the monastery, the National Museum Institute of Indian Central Goverment, a group of foreign NGOs and volunteers from museums across the world.

As part of the museum project there has been a comprehensive documentation of the collection as well as the publication of inventories to prevent the threat of theft and illegal art sales. The team hopes that as part of the restoration of the damaged and worn artefacts a model of cultural management can be implemented for all Ladakhi institutions (monastery, monument, museum, cultural centre) for the future enhancement of their collections.

“We have built a museum, yes, but above all we have trained local restoration, conservation and management teams so they can look after the museum by themselves,” says Nelly Rieuf, project manager, a thangka restorer and graduate of the Sorbonne. “The project will be finished when the museum runs independently. After teaching the skills and knowledge comes the time when we progressively transfer the responsibilities to each team. This takes a lot of time as it is important for us and for them to keep in touch, exchange and have a regular look on what is going on.”

The project employs eight per cent of its workforce from the village including women from 21 to 41-years-old who have been working on the restoration of objects and have exclusively been tasked to manage the gardens. It is hoped the museum will also bring in a steady flow of visitors and the community will develop some touristic structures – restaurants, guest house.

“Aside from the spiritual benefits of having the collection restored, having increases the visitors to the Matho monastery should hopefully create a sustainable source of jobs, specifically in maintaining the museum, and providing amenities to visitors,” says Rieuf. “What I have experienced is the relationship between people and the monks has been reinforced while working together on the project. Also, all of them are very happy with the building, the restoration work and from a religious point of view, all these factors mean a great deal.”

The monks have been directly supporting the project materially (they donate basic construction material, and feed and lodge the volunteers) and have provided moral support to the teams by sharing their knowledge and taking part in the management.

The Matho Monastery is famous for its annual Oracle Matho Nagrang Festival, held in the spring time on the 4th and 15th days of the first month of the Tibetan calendar. “The monks are as much part of the project as we are, it is a complete cooperation. Any decision is confirmed by them. Today, they are very excited by the construction and the restoration work, especially as during the festival all the surrounding villages and villagers saw it and praised them for it.” 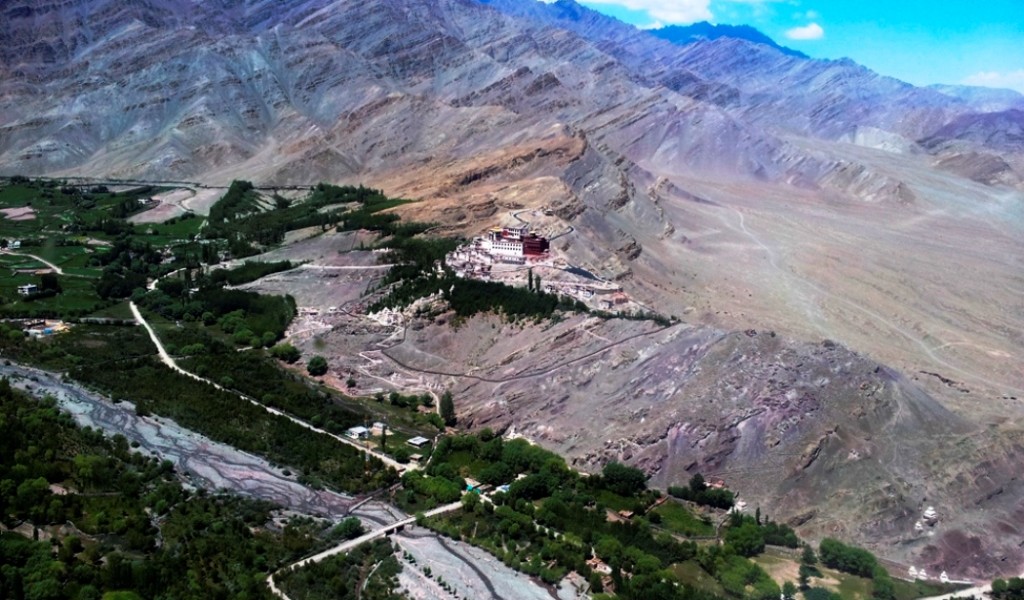 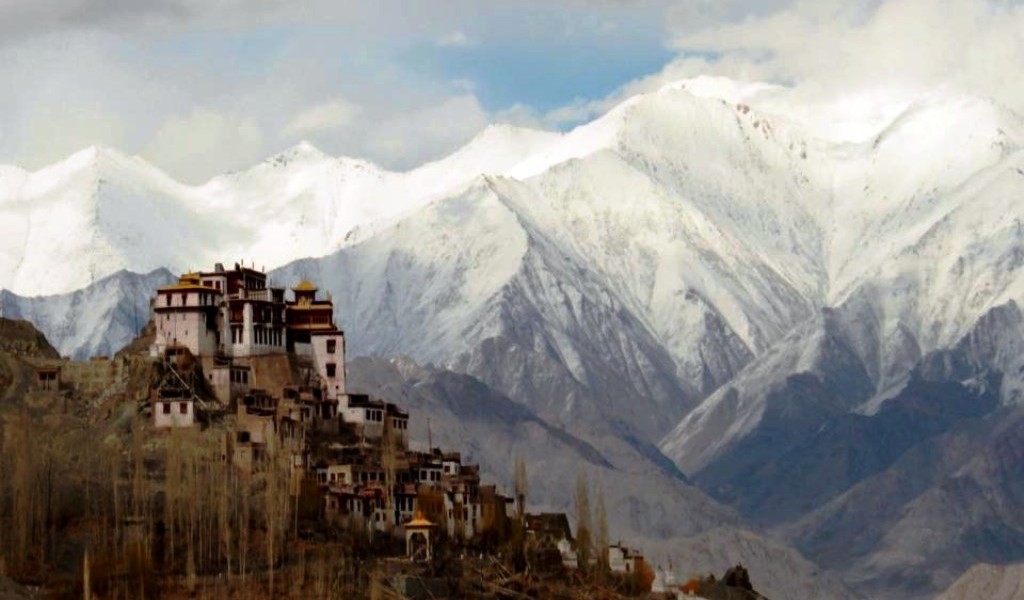 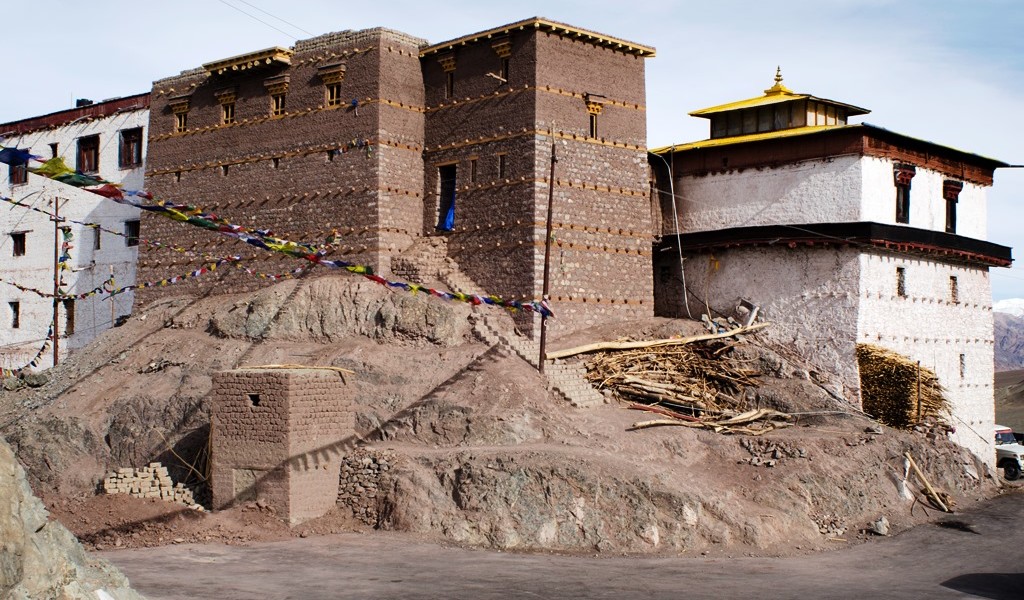 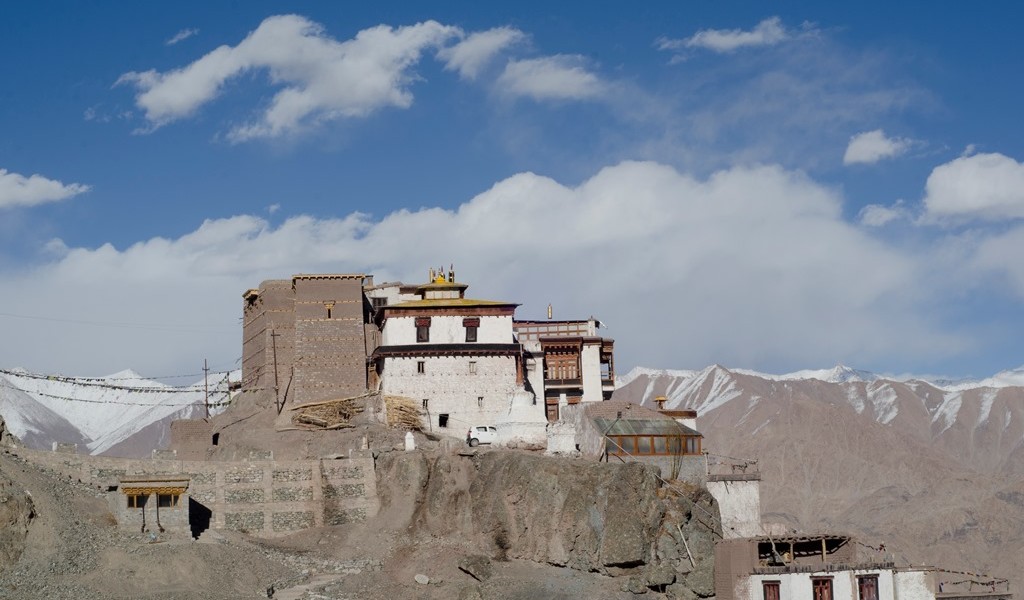 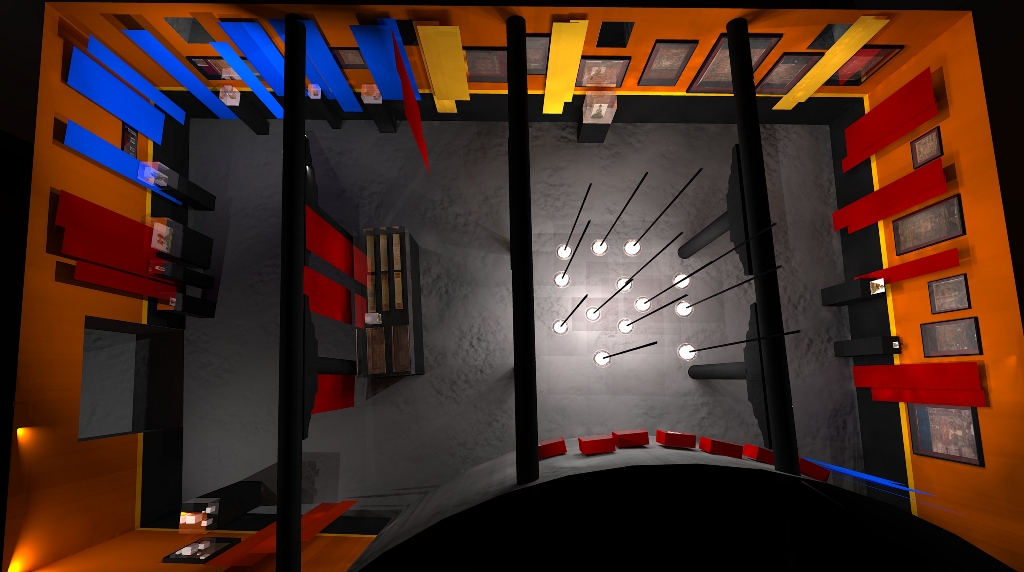 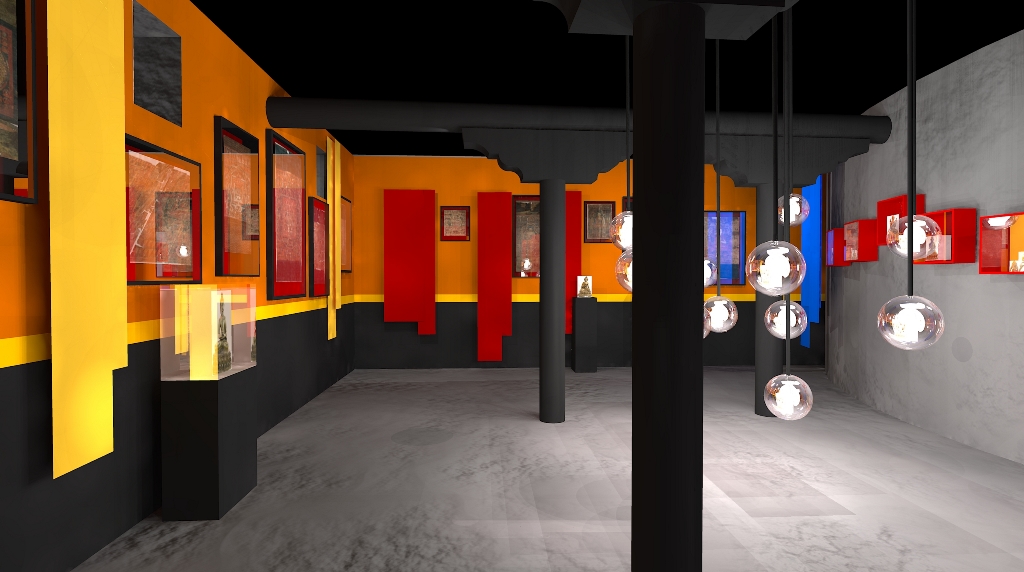 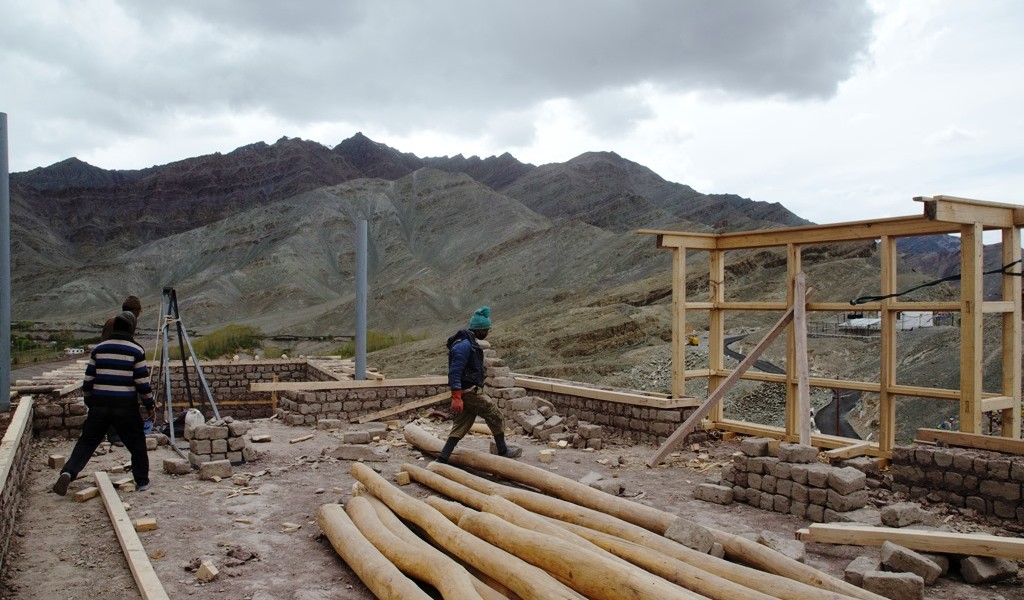 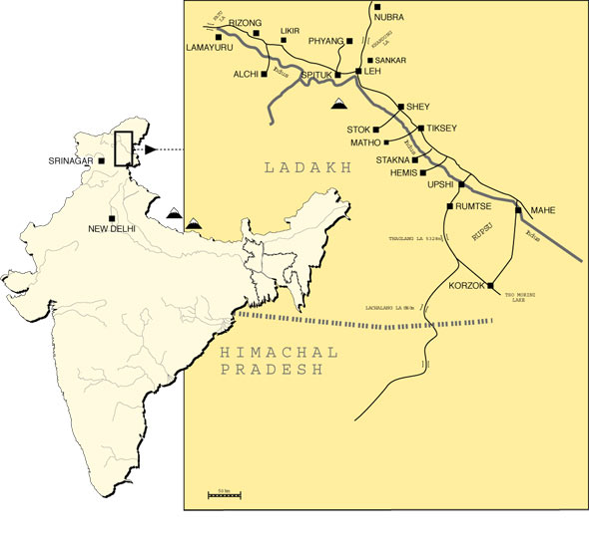 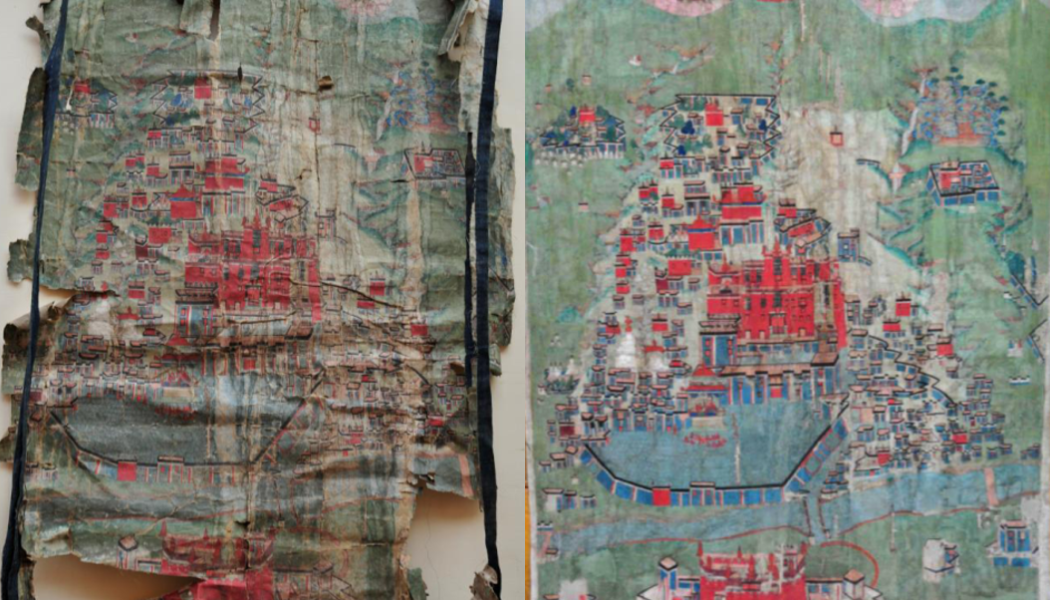 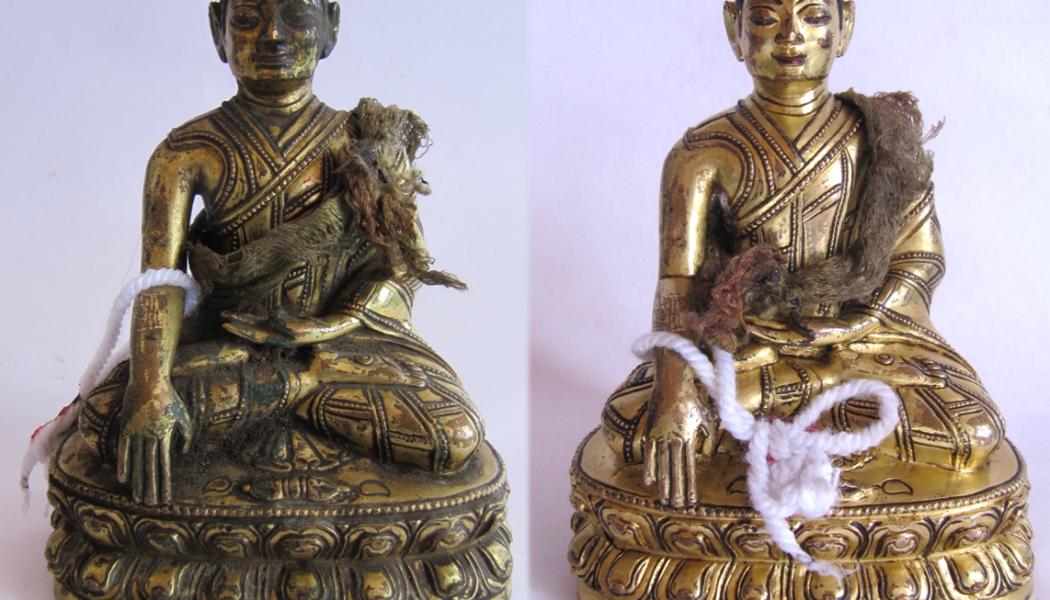 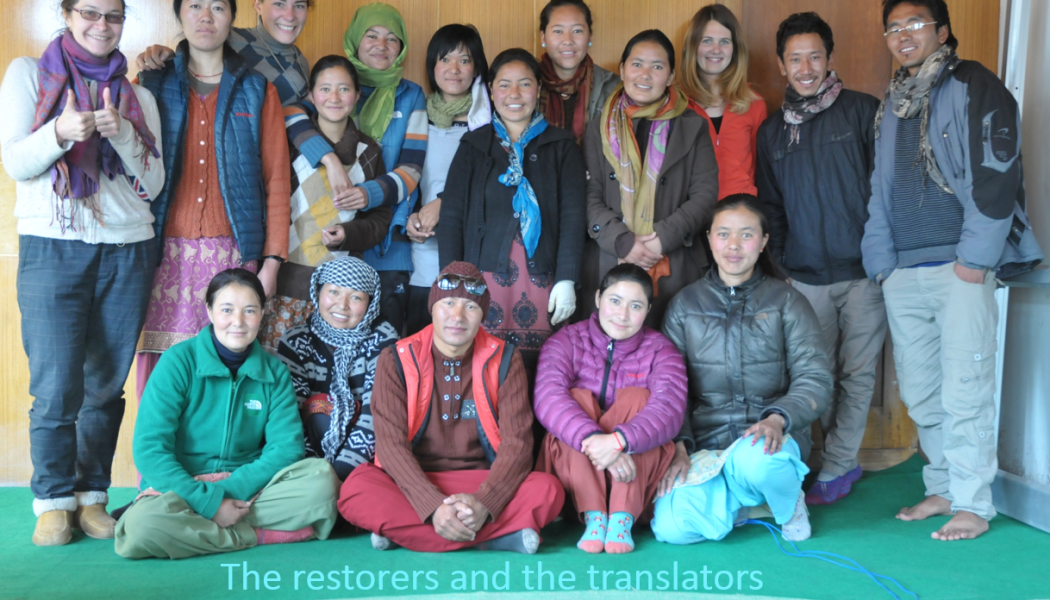 The collection of objects at Matho Monastery consists of a cross-section of Himalayan Buddhist art: 9th century Kashmiri bronzes, medieval images inspired by Nepali craftsman and modern-day Chinese-style scroll paintings. The museum will have three themes for the three exhibition floors: A time-traveller’s journey back to ancient times, highlighting the origin of styles and unsurpassed virtuosity, A Who’s Who of Buddhas, Bodhisattvas, deities, lamas and an educational ‘Buddhist philosophy 101’ and finally a tour of Matho Monastery’s history, and its monks’ rituals.

At the top of the new museum building will be a glass library were people can relax, have tea and coffee and reflect on the subjects they have just seen during their visit with a selection of corresponding books. Throughout the complex there will be four terraces with panoramic views of the Himalayas. The building itself is being constructed on a restored foundation and in a traditional way, which respects the aesthetic and the techniques of vernacular Ladakhi constructions to blend harmoniously with its adjacent buildings. The building is also environment friendly, with most of the material used – clay, wood, stones – being local and is therefore more adapted to Ladakh’s low temperatures and to the threat of earthquakes.

The design of the building will follow the ancient Sakyapa style of architecture and local craftsmen have been using traditional construction methods.  The architectural work and construction of the museum is being supervised by Suresh Sreshta, architect of several highly regarded museums in the Himalayan region and Yutaka Hirako, co-director and architect for the Tibet Heritage Fund (THF), on the plans of the late Andre Alexander, founder of the Tibet Heritage Fund and a pioneer in the efforts to preserve Old Lhasa.

“THF was involved in the primly documentation of the Matho monastery building survey and architectural documentation in 2011,” says Yutaka Hirako, Programme Director

Tibet Heritage Fund/Leh Old Town Initiative. “Through my visits to the site, I have observed Nelly’s willingness to let local Ladakhi people get involved in the restoration of museum artifacts as well as training several local staff in conservation practice. This has a positive motivation for the local people by allowing them to experience the construction and conservation and raise awareness of the importance of their own heritage.” THF has also trained two men from Matho, under its architectural conservation programme, to be directory involved in construction process.

The total cost of the project is €300,000 and the team still has €120,000 to find. The funds have come from a range of private donors, as well as the Samuel Rubin Foundation. Veda Laxmi Khulpateea, trustee of the Good Karma Trust, which has been raising funds since 2012 as it promoted culture in the region: “We got involved because the collection is a unique one in its scope and size. From a personal standpoint, the benefits to the local community, in terms of revenue, jobs, etc make the project even more interesting.”

The project has not been without its challenges, with the team having to deal with geographical and seasonal isolation, which sees the roads become inaccessible for up to six months of the year. “Material has to be imported along roads that are closed six months per year, often in a bad conditions, and then they go through quite unpredictable customs,” says Rieuf. « The team lives and works together so a big part of my job is to remove pressures that could eventually lead to tensions. Everything takes much more time and energy here as everything needs to be checked at least three times before we order.”

In May Nepal was hit by a massive earthquake with the affects being felt in Matho with parts of the mountains falling into the river that feeds a hydropower dam, which was subsequently emptied to avoid flooding, leaving the village without electricity for a week.

The size of the project has been quite monumental too, with Rieuf calling on volunteers in many different competences including architects, designers, experts in restoration of raw earth, paintings, bronzes, engineers, gardeners and researchers in all kind of areas such as Himalayan dance, Himalayan jewellery and weapons, art historians, carpenters, masons, labourers, philosophers, religion experts, translators, public relation managers, communication experts, webmasters, photographers, movie-makers, people to make the showcases and the objects supports, accountants, lawyers, museum security experts.

They come from universities including Ecole du Louvre, Sorbonne, and many others as well as museums such as the Victoria and Albert, Metropolitan Museum, Rubin, Musée Guimet and organisations including the SOAS. All of them are volunteers except for the local team and over the past three years represent around 300 people with a permanent team of approximately 50 people in Matho.

“The magic of volunteer work is that all the best experts on Himalayan artifacts work for us. No museum could afford a team like ours if they had to pay for it.”

The Matho Museum is scheduled to open in July 2016.