The Transformation of IWM London

Share
Vanessa Rayner, IWM’s Head of Planning and Strategy has been working on the transformation of the Imperial War Museum London since 2010. Here she tells Advisor about this huge project to commemorate the centenary of the First World War.

IWM was founded in 1917 while the First World War was still being fought, to ensure that the stories of those who lived, served and died from Britain and former empire were recorded and collected for future generations. The museum has continued fulfilling this remit and today is made up of five branches, with IWM London as our flagship branch.

In 2010, with the Centenary of the First World War fast approaching, we embarked on a major redevelopment project at IWM London to mark this anniversary, with the intention of building brand new First World War Galleries, reconfiguring our central Atrium space and creating new large object displays as well improving our visitor facilities. 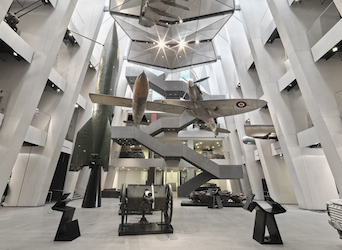 General view of the Atrium

The project to transform IWM London for the Centenary formed the first phase of an overall masterplan to regenerate IWM London over the next decade, which was developed by architects Foster + Partners. One of the constraints we face at IWM London is that any new gallery and exhibitions spaces need to be created within the footprint of the existing building, as the land surrounding the museum is managed by the London Borough of Southwark.

We therefore needed a design that would not only allow us to accommodate the higher visitor numbers we were projecting (a 30% increase) for the Centenary, we also needed a new layout which was more intuitive and easier for our visitors to navigate. From a financial perspective, we also wanted to increase opportunities to generate income through corporate event, café and retail spaces, as well as managing our costs by making the building more energy efficient.

At this time we established two small curatorial teams, with experts, historians and curators drawn from across our collections to create the narrative for and curate both the First World War Galleries and new Atrium displays.

For the new Galleries in particular, we undertook formative audience research to inform this process, and we found out that now that the war is outside of living memory we needed to create a narrative that didn’t assume prior knowledge, but wasn’t patronising. We also wanted to create an experience that was state of the art, drawing on new technologies in a way that met the expectations of our visitors.

The team started at the drawing board, taking over a large store room and creating a top line narrative using post-it notes. This was then translated through the help of our exhibition designers Casson Mann into the narrative and exhibition experience our visitors see today.

There were some key stakeholders vital to the project. Our Youth Panel, made up of 14 to 19 year olds from around London were heavily involved in the project, from advising our curatorial teams on whether the content would work with young audiences and writing the family captions for our new Galleries, to hosting and acting as spokespeople at our major launch events. The other key group was our access advisory panel, a group with a range of different experiences who helped us ensure that our new displays, and in a broader sense the architecture of the building, were compliant and sensitive to those with access needs.

After an extensive period of planning and scoping works during the first 2 years of the project, the major physical works began in September 2012 when we closed certain galleries to the public to enable us to begin to decant objects and transport them to our conservation studios and stores at IWM Duxford.

It is never an easy decision to close a museum to the public, but in both cases after evaluating the works, and assessing the impact they would have on our visitors, it was decided that we had to close to enable us to safely and securely deliver the most disruptive works for our ambitious project.

IWM London opened to the public on 19 July 2014, in time for the Centenary and with queues of visitors down the street. To date we have surpassed all of our targets with record numbers of visitors, donations and spend in our shops, and the numbers are looking promising to reach our annual target of over 1.3million visitors. The new First World War Galleries, constructed by our exhibition fit out contractors, Fraser Randall, are now a third bigger than previously with over 1,300 objects on display along with many, many more on over 60 audio-visual interactives. 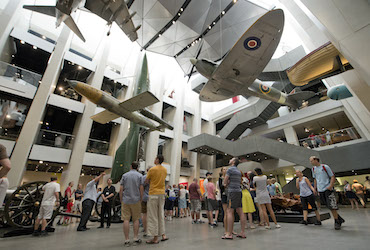 Our transformation to date has been funded thanks to the support of major donations from government and the Heritage Lottery Fund as well as trusts, foundations and individuals, corporate sponsorships, the support of the IWM Friends and the public.

There are things still to learn about how the space is used by our visitors, and as with any major redevelopment, we are now undertaking a period of snagging. We are also currently working on a major audience evaluation project to gain a greater understanding of what is working well, and what can be improved. This is a vital part of the process and will also feed in to the next stages of the masterplan to regenerate IWM London where, in the future, we are planning to create more new gallery spaces and a new ground-level entrance and landscaping at the front of the building, creating a community space which improves public access and provides a home for the iconic naval guns.