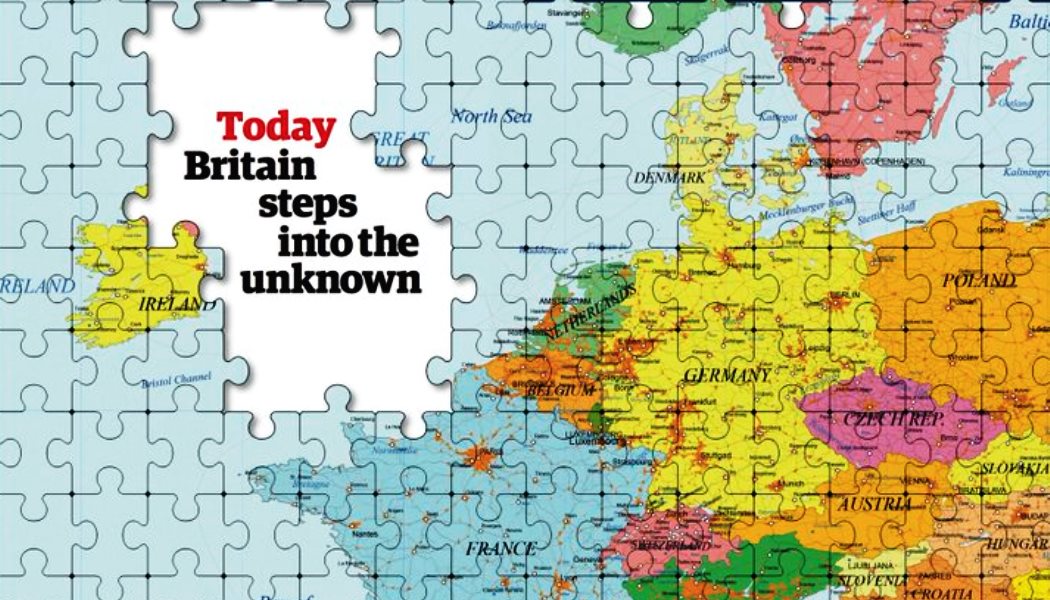 By Adrian Murphy. Main Image: a section of The Guardian's front page from Wednesday 29 March
Share

Nine months after voting to leave the EU, the UK has made the most significant step towards exit today as the prime minister, Theresa May officially triggered Article 50 of the Lisbon Treaty that notifies the EU of its wish to leave

Article 50 means that one thing is certain “there is no turning back” as May told parliament today and the UK will leave the EU. But what happens next is not so clear, which means there is a huge amount of uncertainty not just for the country but for museums as well

At ICOM-UK’s Working Internationally in a Post-Brexit World conference earlier this month, 200 museum professionals began a discussion in the Flett Theatre at the Natural History Museum (NHM) about what opportunities and challenges Brexit opens up for UK museums.

Some of the main challenges revolve around funding and free movement of people, then there’s the economy and exchange rate, retaining and recruiting the talent of EU nationals (as the rights and residency status of EU citizens in the UK and British citizens on the continent has yet to be finalised) and of course the movement of objects.

While it was difficult to see opportunities in such uncertainty, many agreed that Brexit would certainly bring change and with it new ways of thinking and new partnerships.

It was also apparent that Brexit will affect some museums more than others, with many of the direct effects of Brexit to be felt by national museums, which rely directly on Government funding. But any downturn in the economy, as a result of Brexit, would be felt by those museums who rely on local authority funding. When it comes to UK museums working with partners in the EU this could create its own obstacles as possible new rules could see increased charges on transportation of objects and visa costs that would have to be factored into the budgets of future projects.

“We need to enter this era with a positive viewpoint and find where the opportunities are,” says Michael Dixon, Director of the NHM who gave a keynote speech at the conference. “So in this organisation we have tried to think about what are the factors that are going to affect us. What are the drivers of those changes and is there anything we can do about them, or indeed can we mitigate their effects? There are three areas we are thinking about: New business models will emerge, so we ought to be looking at what are they and how we turn them to our advantage. Clearly there will be new forms of funding we need to find if we have to replace all of our EU funding. And this change could mean we do a lot more work in partnership with other institutions and we may get funds from other nations in the process.”

Dixon readily admits there are going to be ups and downs both during the Brexit negotiations and after. The fact that the pound has fallen so far against the Euro (it plummeted again as May signed Article 50 on Tuesday night) means it is cheaper to visit the UK at the moment, he says, and we are seeing record numbers of tourists in London and record numbers of visitors to the UK, which he sees as an opportunity. The flip side to this lies in the business and economic factors of a museum. “This is much more profound perhaps, for example the NHM generates quite a lot of income from European sources, which is paid in Euros,” he says. “In the last full fiscal year we had an income of €5m and if you convert those Euros to Stirling with a 20 per cent devaluation then you are receiving a significantly lower sum than might have originally been contracted.”

A similar situation could be replicated in the international movement of goods. The rules and costs of which are likely to change post-Brexit and there may well be taxes and duties on services and goods UK museums send overseas, making the process more expensive.

“We may have different rules around customs,” says Dixon. “Customs clearance, slower movement of goods – it may take longer to get anything done and perceptions of Britain are a relevant factor here.”

Managing this and the fact that the government has announced that all department should look at six per cent cuts in 2019-20 means that museums funded by the DCMS through grant in aid are having to think about a worse-case scenario.

And then there is the thorny issue future visa policies, which Dixon suspects will make little difference for visitors to the UK but for freedom of movement of employees it will be a completely different situation. “HR issues are really about freedom of movement – my assumption is that employing nationals from EU member states in the future is likely to require a visa and it is only going to get more difficult to recruit people from overseas,” he says. “Hitherto it has been quite easy to recruit from the EU and at this museum we have about 125 members of staff, about 15 per cent of our workforce, who are nationals of EU member states.”

Already NHM is encountering difficulty in recruiting senior research scientists from the European Union because they do not want to take a risk on what their future UK status might be. “Many of us contract out a range of services with blue collar jobs which are typically filled by a lot of EU member state nationals. So the cost of staffing some of these outsourced contracts I think is likely to change with an upward trajectory.”

In terms of European funding, NHM has just launched five Marie Curie fellowships funded by the European Union. But Dixon says the ability to do that in the future is likely to be compromised and he also thinks the impact of Brexit on government funding needs to be thought through.

Christoph Jankowski, head of culture for England at the Creative Europe Desk UK, which funded €40m in UK cultural projects between 2014 and 2015, wanted to reassure UK museums that they are still fully eligible to apply for funding, at least until the end of 2018, and that there was no bias on applications led or partnered by UK organisations.

“In fact UK organisations are in high demand as partners – they are the most partnered in Cooperation Projects and applications are twice as likely to be successful,” he says. “Any multi-annual project that runs over this [2018] time will be guaranteed funding by HM Treasury. The UK may wish in future to negotiate its way into this and others such as Erasmus+ and Horizon 2020.”

However, that does not allay the negative perception of the UK post-referendum, which Dixon has encountered and which he says is a risk to partnerships with other EU member states. The NHM is currently part a consortium of natural history museums in Europe that has been building up to a large bid to the Horizon 2020 programme. “The intellectual leadership of that consortium has come from this museum and it is quite likely that by the time we get to the point of making that application we will not be able to continue to lead and may not even be able to participate in that project.”

Forging new partnerships will be a key factor for many museums in the future and NHM has recently formed a global consortium of 12 natural history museums that, working in partnership, should give it access to European funds, albeit through a back door, as well as access to funds from North America.

For locally funded museums such as Derby Museums Trust partnering with local industries that in some cases are vociferous supporters of Brexit could be a catalyst for future strategic planning.

“Trying to be optimistic, Derby has three very large industries that consist of Toyota, Bombardier and Rolls Royce and just outside JCB, and they are taking a very different view to Brexit by looking at opportunities,” said Tony Butler, director of Derby Museums Trust. “A huge company like Rolls Royce will be factoring in all kinds of scenarios and they are a key partner in our Museum of Making. I had a meeting with the deputy director of JCB about two days after Brexit, (the chairman is a big supporter of Brexit) and he spent an hour talking about the opportunities of Brexit. So there are people out there in industry that run big organisations who are thinking about the positives and we as cultural organisations, even if this is outside our understanding, need to be riding their coattails.”

Butler said the landscape was changing and whereas in the past you were never far from EU funding, even if you did not receive funds directly, in the future that would not be the case. “Things like the ERDF and ESF [European Social Fund] have funded regional museums indirectly, so we will miss that. Directly I think it probably won’t make that much of a difference to our organisation in that our international partnerships look westward to the States, Southern Australia and now to the Far East. In a way UK museums took the EU for granted as we could easily work with European organisations, it was easy to exchange objects, we could exchange staff and I think we are going to miss that, too. Last year I was at Bury Art Museum, which hosted the European Network of Cultural Centres and I can’t imagine it hosting that once we are out of the EU.”

Indirectly, Butler conceded, the impact of the economy will have an effect on museums, with the bulk of Derby Museums Trust’s funding coming through local government, which has been hugely affected since austerity began in 2012. “So if the economy does not grow as much as it should do then it will have a direct impact on our museums.”

While the Brexit negotiations are hammered out over the next two years museums will also be trying to find ways of doing cultural business with their EU counterparts and as Gabriele Finaldi, director of the National Gallery says: “We have a cultural responsibility to keep the long historical cultural links blooming.” Next year is the European Year of Cultural Heritage and maybe then we will have a clearer picture of what the UK’s future with the EU will be like both culturally and politically.