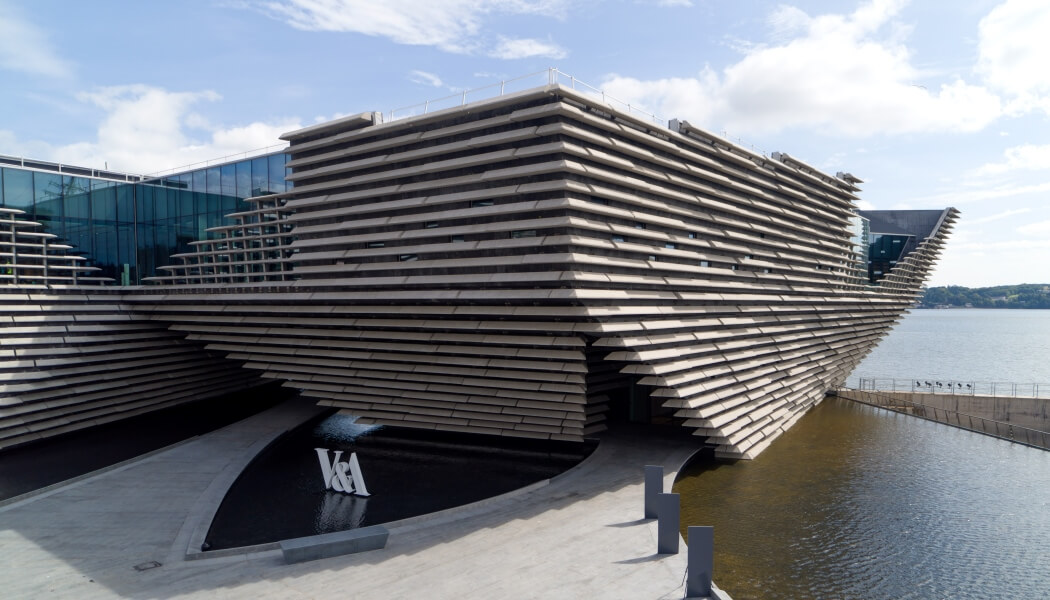 Following nearly a decade of planning and fundraising, and three years of construction the £80m V&A Dundee will open to the public tomorrow in keeping with architect Kengo Kuma’s vision of being a living room for the city

It is the ‘fire in the belly of the city’ says the 30-year-old leader of Dundee City Council, John Alexander of the free to enter V&A Dundee. He is under no illusions as to the impact the new museum along the city’s waterfront will have on the cultural aspirations of Dundee and also the economy.

The V&A Dundee expects 500,000 visitors in its first 12 months and then a sustained 350,000 visitors each year after that bringing a constant flow of new people into the city

I have never heard people speak with such passion about their city as I have done since this project began. And that to me is absolutely priceless 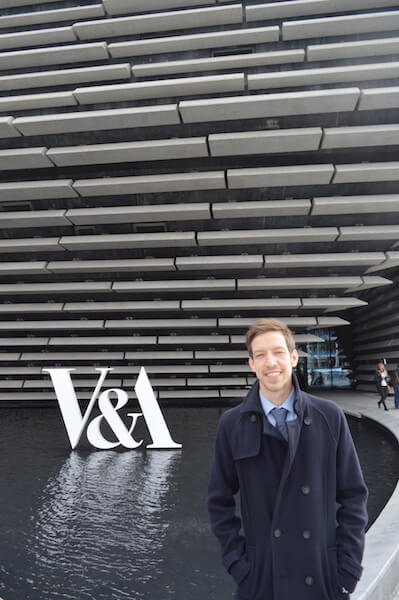 Alexander says in the six months leading up to the museum’s opening overnight stays in the city have increased by ten per cent, and during the construction phase three hotels, bringing in an investment of £60m have been built. And, just recently, two international firms have confirmed they will be setting up their European centres in Dundee. Not only that, but the new cultural institute has given Dundonians a renewed sense of confidence.

“I have never heard people speak with such passion about their city as I have done since this project began,” he says. “And that to me is absolutely priceless. No other intervention that I can think of would do something like that across every single community in the city. The tangible benefits are clearly the cultural magnitude of what this delivers and the fact that culture doesn’t see artificial boundaries. It transcends all of that and it’s a way of connecting people and has a reach that other interventions don’t necessarily have.”

The Michelin Design Gallery, an agile space in the museum, showcases work from the Scottish Design Relay, a national project lead by the learning team

He says there is clearly a challenge within local government in regard to funding culture but taking a longer-term strategic approach to planning can have a far more positive effect on a city. “We are a major funder as a local authority of all of our cultural offers and that investment and support is ongoing. We work very collaboratively and we all sit around the same table to see how we can work together because we all realise that there is a material benefit and the ripple effect it has across the city.”

The project has not been without its challenges, not least the fundraising, which has now been completely secured and even before construction began the museum’s learning team were engaging in outreach projects in all eight Dundee wards and toured the country on a mobile museum bus.

“We started to develop a local project in 2013 that would get the people of Dundee engaged with the museum and I think what was challenging about that was we didn’t have a building and we didn’t have any collection,” says learning manager, Julie Muir. 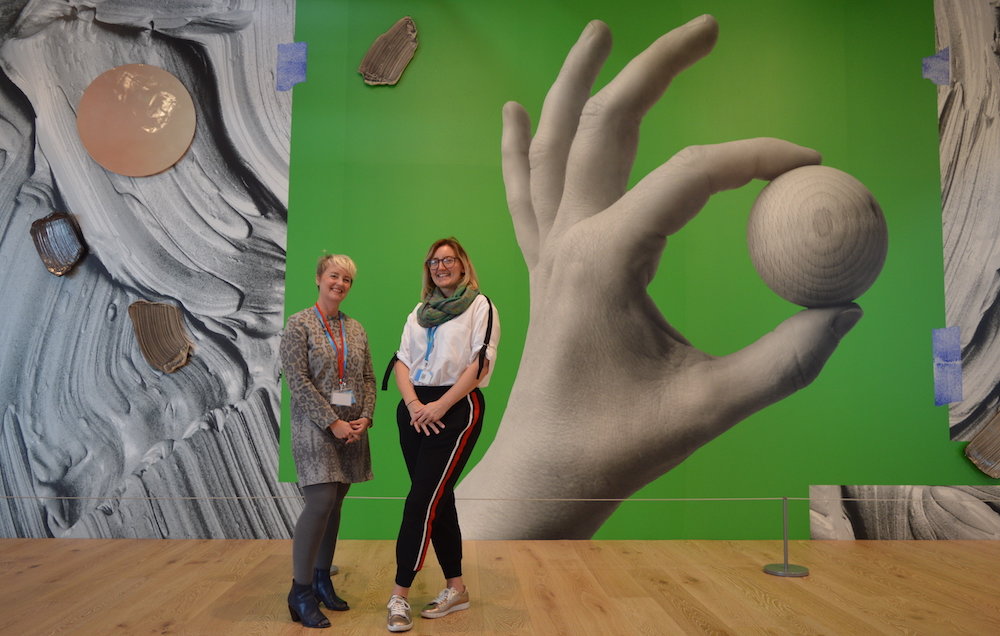 Learning manager, Julie Muir and head of learning Jo Mawdsley in front of This, Looped by Ciara Phillips. Photograph by Adrian Murphy

She says the first project took the idea of Living Room for the City out into community centres, libraries, shopping centres and church halls to engage groups in what design was and what it meant to them.

The learning team wanted these communities to feel as comfortable coming to the museum as they would their own living room and asked them to design prototype lights for their living rooms in a practical mobile workshop where everyone of all ages could get involved.

“Going back to 2014 the museum was like pie in the sky to some people almost. We would go out to a community centres in wards that were disconnected from the city centre and we were saying this is a chance for you to get involved in what we are trying to achieve.”

Muir says there were a lot of rumblings with people saying ‘I’m not doing that’ but she believes that because they were going out to the communities and bringing something quite fun, many began to appreciate that these were activities they could do with their children and were not threatening in any way. “People did take part and we had an exhibition of all the beautiful lights they had designed at Abertay University, one of our partners, and invited the people who were involved and it was an opportunity to show the kind of projects we would be doing when the museum opened.”

And that’s how they began to assemble ambassadors from various communities and groups such as Home Start, which supports families. They now have strong connections with access groups, teacher-focused groups and the museum’s own Young People’s Collective, a group of 16-24-year-olds who help inform how the museum and its programme addresses the need of young people. The collective has also helped shape the programme for the music festival which is taking place over the opening weekend. 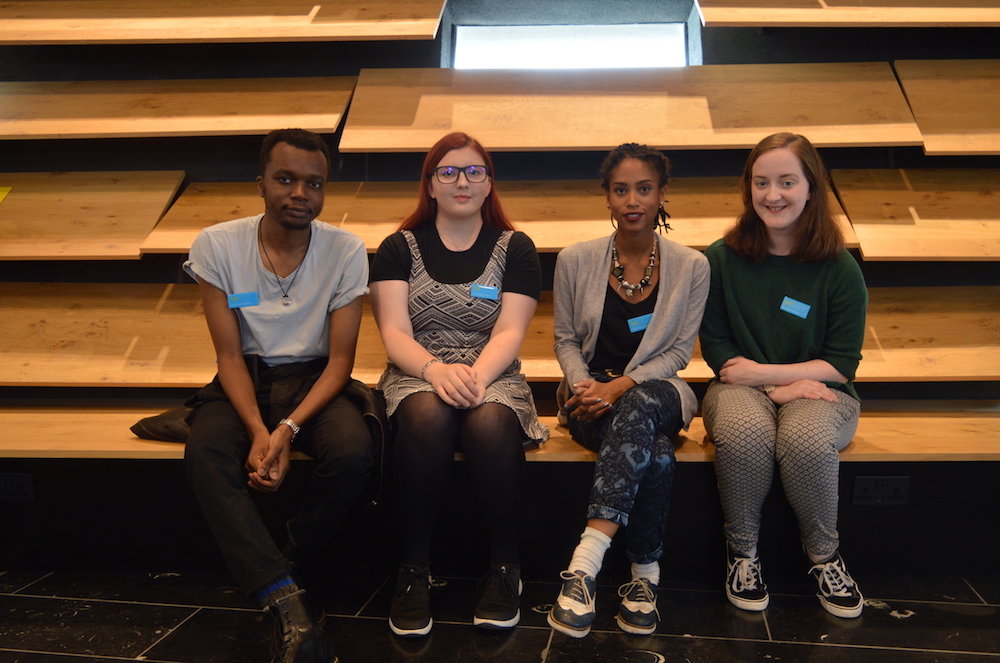 “We are relying on people to come to us now because we have built this relationship over four years and the contacts that we have mean we can ask people to come in and test ideas to do with exhibitions, guided and workshops and to get involved in activities. We hope we have given them the confidence to do that.”

The museum also has a pool of 25 freelance designers and educators to help engage with visitors and has an agreement with Dundee City Council for ten years of secondments with local teachers.

“It’s allowing people to aspire to something a bit bigger, to open their mind and be curious and also feeling proud that this international museum is in their city. It’s also about debunking learning from a formal setting and offering experiences.”

The V&A Dundee is at the centre of a £1bn redevelopment of the city’s waterfront and consists of a main hall with reception, shop and cafe with views of the River Tay, a learning centre, auditorium and a temporary exhibition space, which has opened with a V&A touring exhibition Ocean Liners: Speed and Style. Opposite this is the Scottish Design Galleries, which features the restored Charles Rennie Mackintosh Oak Room.

“The V&A Dundee is free to come into, there are no barriers from our perspective to people coming into this museum and we will continue to go out and work with communities across the city,” says V&A Dundee director, Philip Long.

“Today more than 2,000 local people have been invited to visit the museum before it opens to the public on Saturday. We want everyone to benefit from what V&A Dundee can mean to this city and we will do everything in our power to get them engaged.”

The reception area and main hall of the V&A Dundee

The V&A has been delivered by Design Dundee Limited, a new charity established by a partnership between Dundee City Council, the University of Dundee, Abertay University, Scottish Enterprise and the V&A. It has had significant financial support from the UK and Scottish governments and the Heritage Lottery Fund.

“It’s a new part of the city’s cultural offering. It shouldn’t be intimidating and I think Kengo Kuma has designed a building that is warm and welcoming and it will be a building that Dundonians and people from across the world are very proud of. It’s an amazing achievement that has been led not just by the V&A but our partners across the city.”