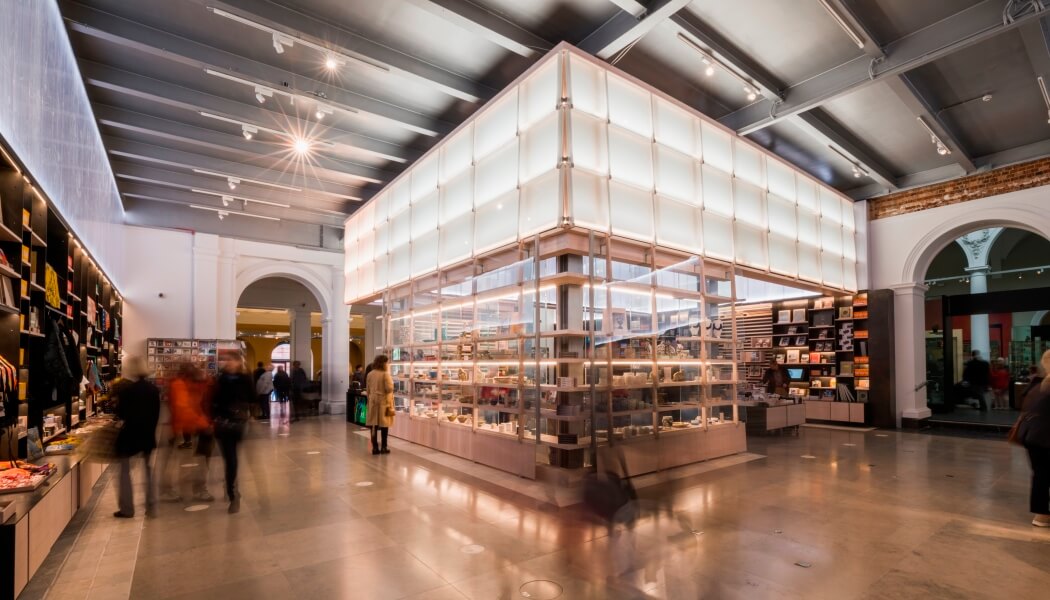 The V&A’s new shop: extending the visitor experience through retail

Part of the V&A’s mission set out in 1852 by its first director Henry Cole, was displaying the best examples of art and design and today the redesign of the museum’s shop, which was unveiled in May, hopes to do just that while also taking up another of Cole’s missions: to demonstrate exemplary design and decoration

The £2m redesign of the V&A’s shop earlier this year was its first refurbishment in 11 years and fits in with the wider FuturePlan for the museum, which has recently seen the redevelopment of the Europe Galleries 1600-1815 and a new Exhibition Road Quarter, all intended to make the museum more open and accessible.

The museum says the aim of the redesign was to reflect the ethos of craftsmanship and manufacture that has always been central to the museum since its establishment in the mid-19th century, while also creating a beautifully designed space to inspire visitors. This has meant creating a shop that is an extension of the visit that includes dwell spaces with places to sit and also areas to hold activities, talks and demonstrations.

“Two years ago our main shop was performing very well, it was a big space with almost 100 per cent traffic [of 3m visitors last year] because of the way it is positioned in the heart of the museum,” says Sarah Sevier, the V&A’s Head of Retail. “However, earlier this year it would have been 11 years old and there were some design features that were incredibly popular and on trend a decade ago which no longer work as well today. An example of this were the amount of behind glass displays – it was an awful lot of glass to give up for display and it was also challenging to shop from.”

To open those cases during a working day was almost impossible, says Sevier, making them unpractical. And there were other elements, too, that initiated the redesign such as the display units, cupboards and the space in general beginning to look tired. 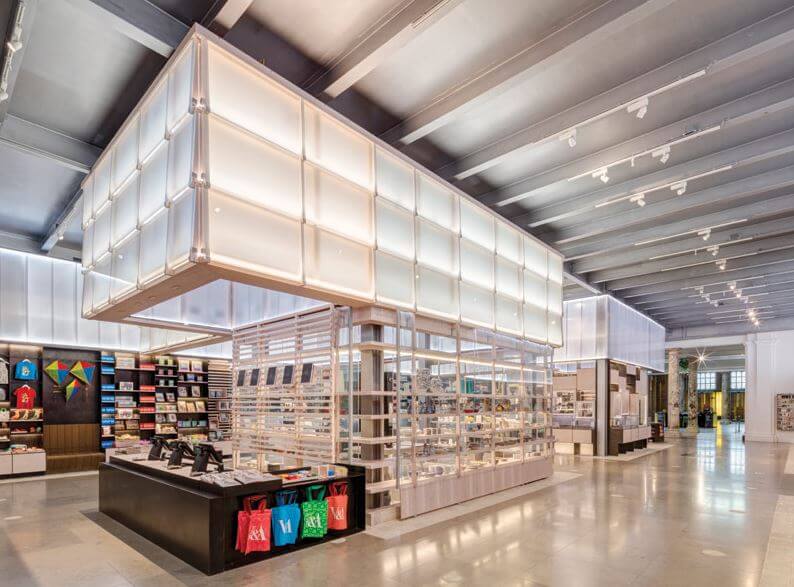 The Jewellery Pavilion within the new V&A shop

Sevier says that it was also quite difficult for visitors to enjoy the old space at busy times as the narrow aisles became congested. So a brief was put together, which went out to tender in April 2016 and by June the museum appointed architects Adrian Friend and Associates to respond to the brief in more detail. The brief was asking for more space, more on site storage and more areas of the shop that could be used by visitors for dwell time. “We were also acknowledging the fact that we would be encouraging the retail staff to engage more with visitors. We would also be looking for different ways to display merchandise, with whole areas of merchandise that we hadn’t ranged before and looking for ways to move the shop forward for the next ten years.”

The project was managed by the Future Plan Group and the retail team were consulted at every stage. They worked with the architects throughout the summer and in September, as the final stage of the planning was approaching, it was decided that the shop would close following the You Say You Want a Revolution? Records and Rebels 1966-1970 exhibition in February.

The distinguishing features of the new shop are much wider aisles and the removal of the 1970s lowered ceiling to create a more spacious retail offer while actually working within the same 5,000 sq ft area. This has been achieved in part by replacing the old perimeter units with new ones that while still using all of the perimeter, are now less deep giving a feeling of more space.

There is now more clarity to the shopping experience as well the shop now featuring a Jewellery Pavilion hosting work from artisan suppliers. This is a free-standing area where visitors can shop for jewellery in one place whereas previously, says Sevier, they were asking customers to travel around all of the shop to find different element of jewellery. There is also the introduction of a Pocket Studio, which is an open space, glazed on three sides that provides, from the outside, the glass display cases that would have been common in the previous shop but from the inside a studio space. 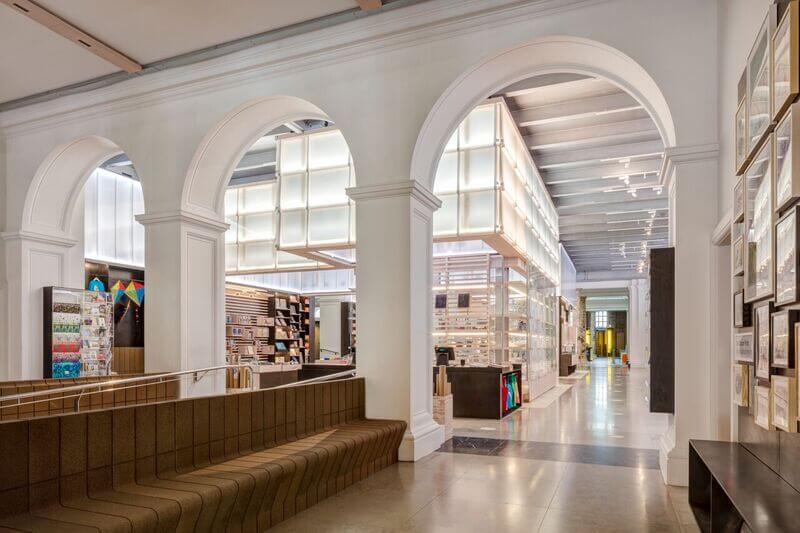 The Pocket Studio will not only be used to sell products but as an opportunity to showcase part of the collection that might not be so well visited. Every four months there will be a cycle of displays with the first focused on ceramics. Sevier says this is the museum’s chance to encourage visitors to discover the core collections as they will be telling stories about individual artisans from the UK and further afield that relate to the museum’s ceramic and textile collections, for example, by highlighting a technique or a type of material and where the visitor might go and see that in the museum. She says the sales team are very much enjoying that aspect of the new shop as it enhances the visitors’ trip to the V&A.

“I think the general feeling was to provide accessibility and engagement. Those are two areas we were very keen to further. At times the V&A is talked about as having a diverse collection but a slightly confusing layout and the sales team and front of house team can play a part in giving more information about where to find things and therefore provide a better experience for a visitor. We are acknowledging that the shop is very much about that experience. We are also giving access to more products at a very keen price with 80 per cent of our range costing from between £1 and £25.”

As part of the redesign the shop will be increasing the V&A’s branded lines and in particular products that can tell a story about the museum. This includes the introduction of four interactive screens around the new shop that can provide a little bit more interpretation and where visitors can see artisans working on the products.  “So again we’re trying to tell stories about the V&A but introduce the makers of the pieces so there’s a human story and a real artisan element behind them. These pieces may not all be V&A branded but they are definitely V&A labelled and tell a V&A story and the reason for us having those.” 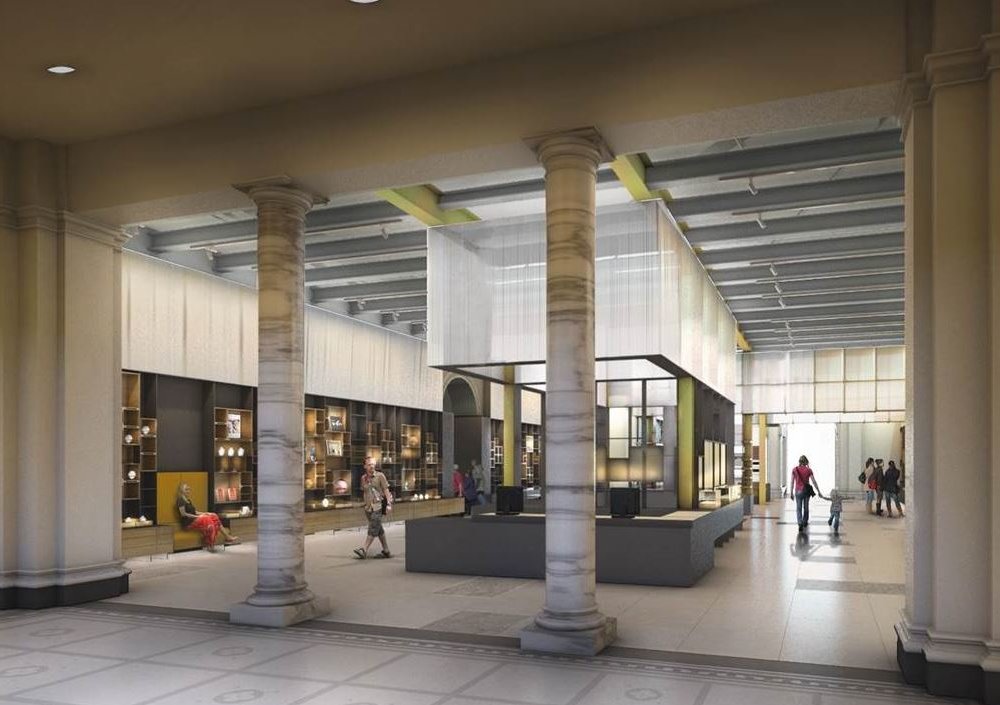 The whole process, says Sevier, is getting back to the origins of the museum to showcase designers to the public and bring design skills to people’s attention. Attention to function and practicality. This will see the shop have more interactivity and interpretation of the products on sale from this autumn and winter, as it introduces a range of products into the Pocket Studio that will be more kit-based and will be inviting a number of makers to show how they work.

“Certainly for the future it gives us the opportunity to display new stories. It could be one or two products or a whole range. It’s early days but we are very optimistic as to how the rest of the year will go. It’s all about the overall visitor experience and if you’ve been around even a couple of galleries or one of the exhibitions, it’s pretty tiring. It’s pretty full on and we want people to be able to enjoy the shopping experience and if that means they want a little rest then they can as we have added to seating areas, and if that enhances the experience then great.”

The key performance indicators of the new shop will now be how many people it can convert from a visitor to a customer and their average transaction value.

Retail in Museums: continuing the visitor experience through the museum shop

MOMA: Making retail an integral part of the museum

National Centre for Craft and Design in Sleaford: balancing national status with a local retail touch