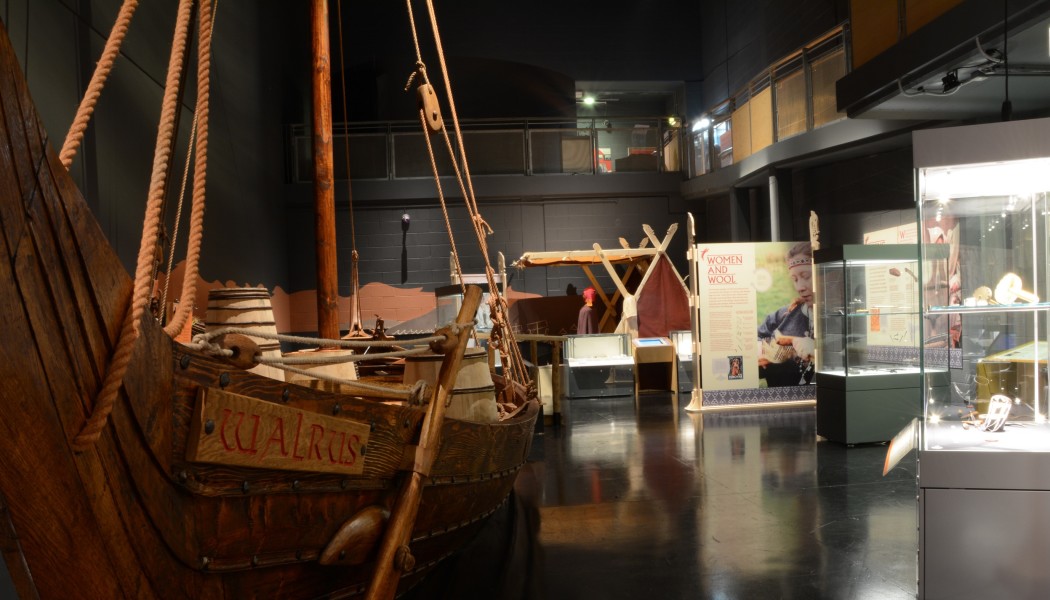 The National Maritime Museum Cornwall puts on its most ambitions exhibition to date with loans from the The British Museum, the national museums of Denmark and Ireland and Manx National Heritage and has built two of the best replicas of Viking ships outside of Scandinavia

The idea behind the two-year long Viking Voyagers exhibition was in the best traditions of the National Maritime Museum Cornwall (NMMC): the desire to show the Vikings as a maritime culture and people. Established in 2003 the NMMC is unusual as a national museum as it is also independent and receives no government funding. However, the staff at the museum, which includes its own boat restoration team, wanted to put on a show that was of exemplary standards even for a major a city. “It is definitely the most expensive exhibition undertaken and the most extensive in terms of objects and loans,” says Dr Tehmina Goskar, Exhibitions Registrar. “Although we are national in name we are an independent museum so we have to raise all our own funds to undertake these kinds of projects. We received grants from the heritage lottery fund and several other generous trusts and funds. Dr Goskar says one of the most costly segments of the exhibition was the transportation, with the added cost of getting them to Falmouth, and the insurance of objects.”

The key linchpin of the exhibition was guest curator Dr Gareth Williams from the British Museum and much of the early discussions of what Viking Voyagers should be and what subjects it should cover came from his knowledge as a world-leading expert in Viking studies. Dr Williams was instrumental in curating Vikings: Life and Legend the huge international three-museum show that was in London last spring and previous to that in Copenhagen National Museum of Denmark and then afterwards State Museum in Berlin.

This meant that it was decided early on not just to focus on the Vikings as warriors but to bring everything back to their boats and seafaring prowess so the exhibition could document their trading activity with the centrepiece being a one-to-one replica of a cargo ship that the NMMC’s boat team built and which people can walk on and touch.

“It’s an extraordinary thing really to have a full-scale replica of a ship side by side with artefacts that are more than 1,000 years old,” says Dr Goskar.

Andy Wyke, boat restoration manager at NMMC oversaw the building of a 6m Norwegian Faering, built by students at Falmouth Marine School and a 14m coastal cargo Viking ship, built by the NMMC team, based on boat plans obtained in Norway. Wyke visited Oslo and studied the Gokstad Ship and decided that it would be perfect to build a replica 6m faering and on his return commissioned the Falmouth Marine School to build it. With help from expert Soren Nielsen of the Viking Ship Museum, Roskilde who built the stem and stern, the students completed the boat and sailed it up the river for the Exhibition opening in March. “It’s one of the best examples of its kind,” says Wyke. The faering is situated in a workshop environment within the museum with traditional tools to give visitors an idea of how it was built. The second boat was based on a vessel excavated in the 1960s called the Roarege, which was part of a collection scuttled by the Vikings a 1,00o years ago. “We chose this boat as it was a good size at 14m and quite wide so quite a few people can get on and experience it,” says Wyke. “It’s as close to a Viking boat as we can get to.” 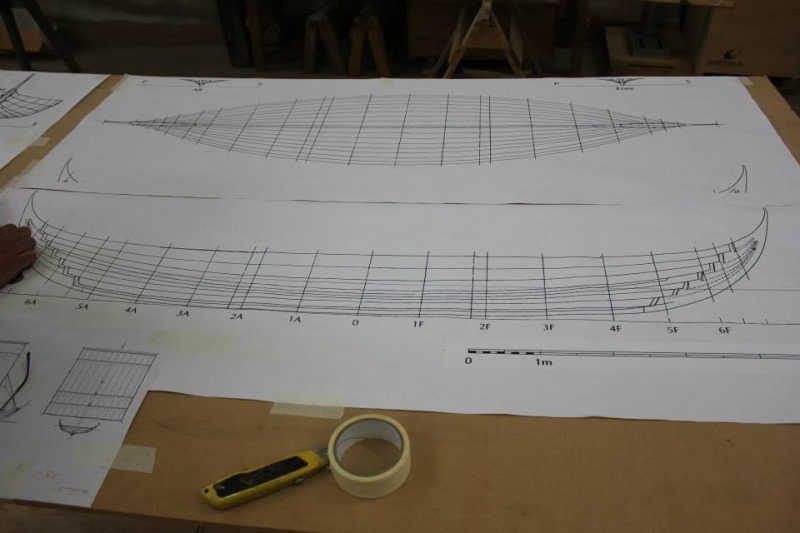 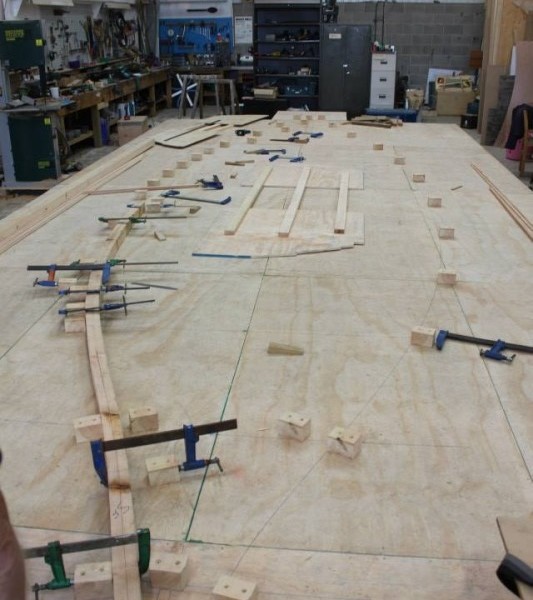 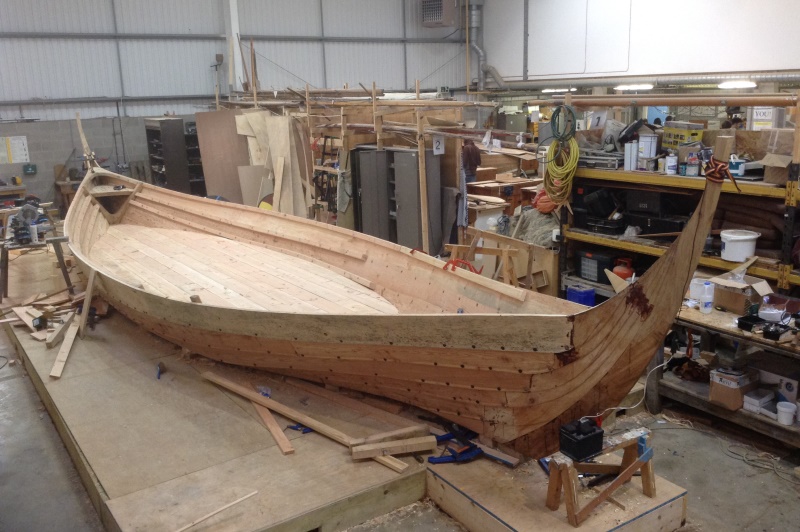 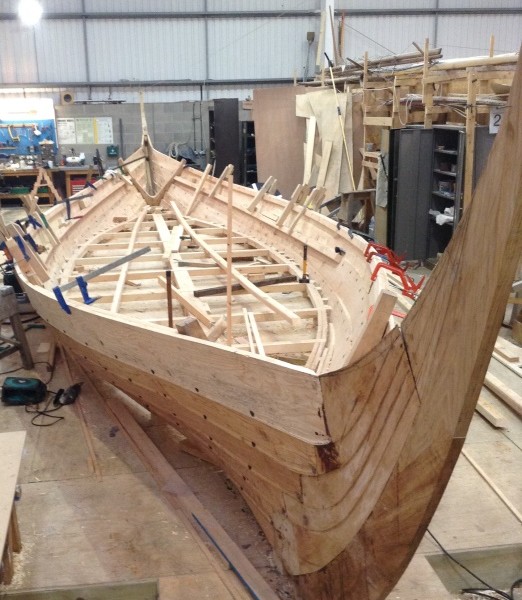 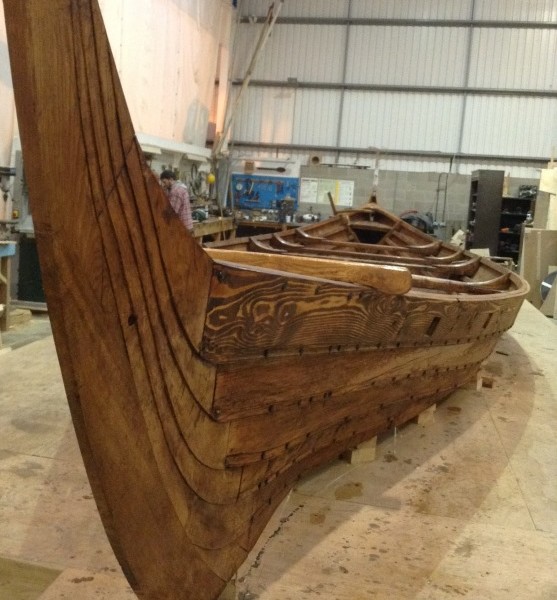 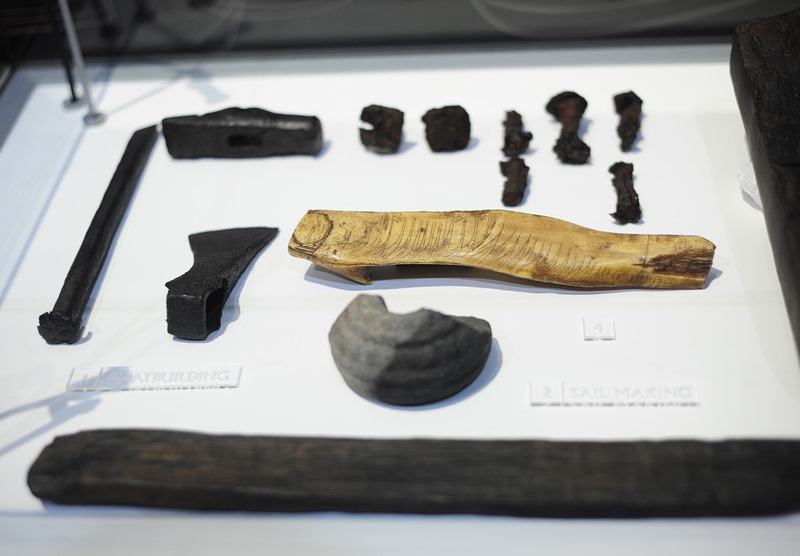 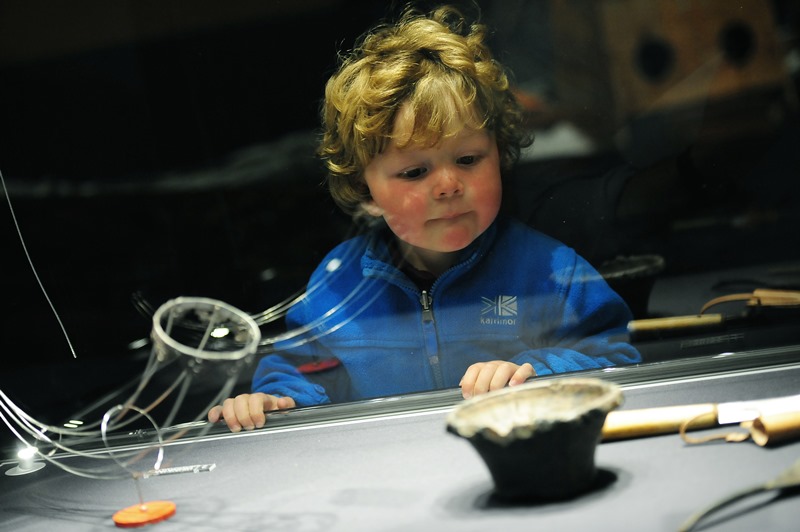 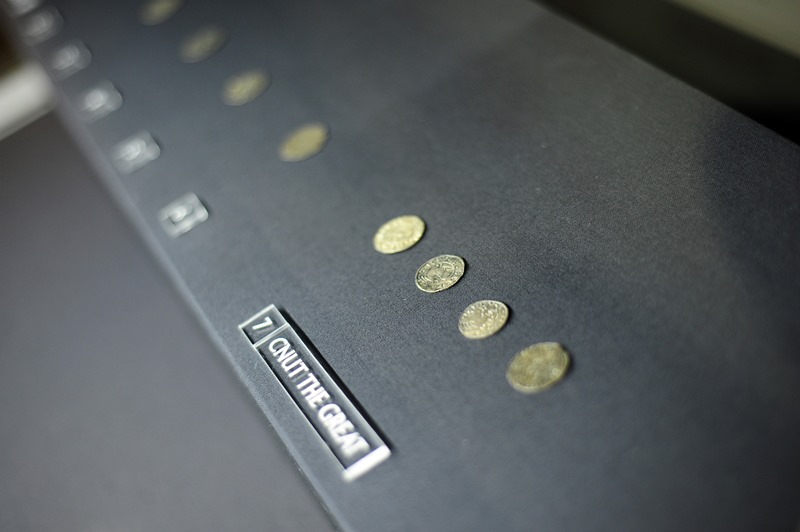 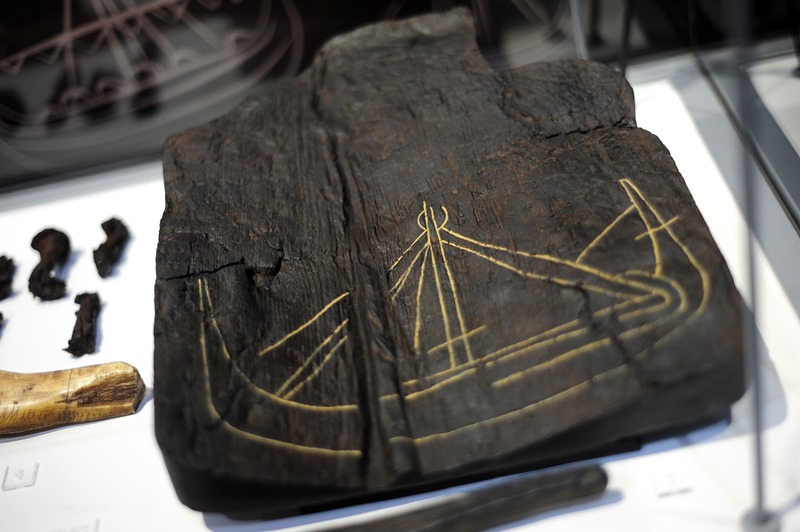 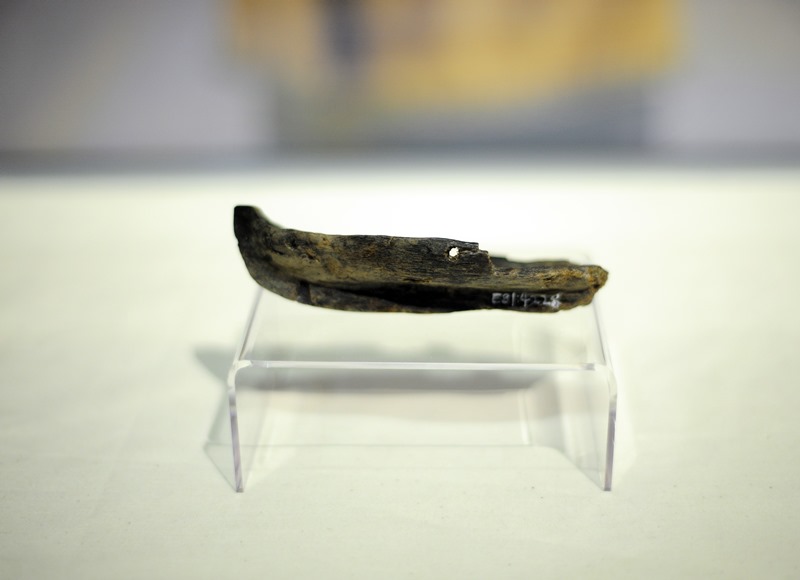 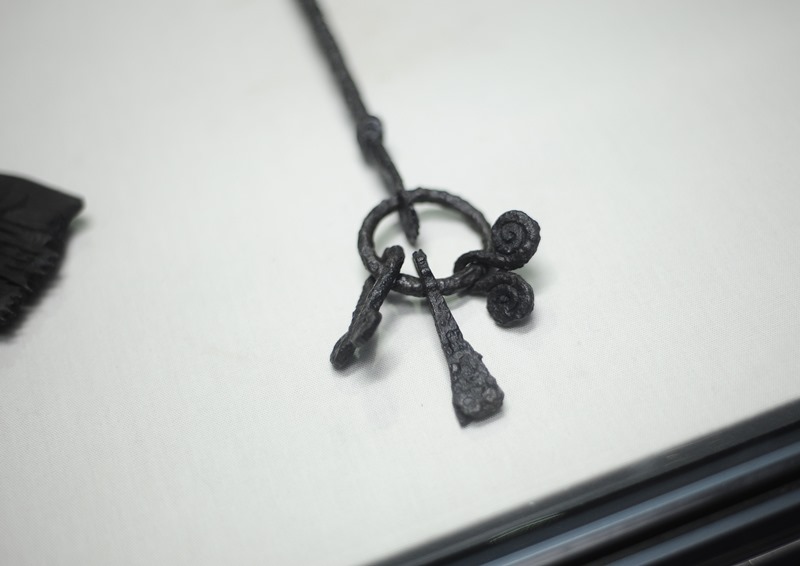 It is for this reason and the fact that the museum has 500 artefacts on display from four different countries that Dr Goskar says the exhibition is definitely a big step change from what’s been attempted before. In order to get the loans she had to overcome some difficult legalities and logistical issues. “We had to work hard on insuring and securing, with security being a major issue and it is something that has benefitted us really,” she says. “It means we have improved our standards so much for the preparation of this show that we now feel confident that we can put on shows of a similar calibre in the future so it’s been a huge learning curve and is nothing like what we have done before.”

The exhibition has 10 main topic areas and the loans blend in with the interpretation with intriguing objects such as a small model wooden Viking boat possibly a toy boat from Dublin, which could be an indication of children being encouraged in the seafaring ways. Another important object is an original iron rod with a twisted end that has been lent by the National Museum of Denmark that was used by women to spin wool and flax for the making of clothes and sails – a vital job at the time.

“Just in terms of the intellectual impetus we needed to make this something that was still based on the latest research but also create an exhibition that would suit our visitors, which consist of a high number of families, intergenerational visits – grandparents with grandchildren for example,” says Dr Goskar.

She says Falmouth is a destination town and this is a destination museum, it seeks to give people an experience in the museum that is part visitor attraction and part museum with its educational and entertainment streams.

And the results have been dramatic so far with visitor figures during Easter up 96 per cent from last year and on a month by month basis so far: March has been up 26.9 per cent, April 23.1per cent and May 19 per cent.

As part of the exhibition new research has been undertaken to tell the story of the Vikings in Cornwall. The archaeology of any Viking settlement in Cornwall doesn’t exist yet or hasn’t been discovered, however, the NMMC team have been able to piece together stories and finds such as Viking raids on the north coast at Padstow in 981 and the 838 Cornish alliance with the Vikings against the West Saxons at Hingston Down as well as artefacts found in the Trewhiddle Hoard near St Austell.

In order to bring all the objects and narratives together designers Image Makers created a cast of characters some of whom were local volunteers but some of whom were from the Cornish Viking Reenactment Group, which resulted in visitors being introduced to audio when they enter the show in Norse and English and then various characters including a warrior and a female trader.

“The two major items are these beautifully created wooden ships which lend themselves to a wonderful smell because they have been sealed with Stockholm tar – so you walk into the exhibition and not only do you hear the voices of old Norse and our English translations but you get the smells,” said David Revell lead designer.

“We also used three really powerful projectors the museum already had, which could create a gobo projection for us – so we have got this wonderful cloudscape that completely covers one side of the exhibition with just that little bit of movement that transforms the space.

When you add that to the characters, the sound, the visuals and smell as well as the intimacy of the objects and the tactile nature of the ships what you have is a really rich show on many levels.”

With the exhibition’s longevity there will be new shows and activities throughout its duration and next year will mark the 1,000th year anniversary of King Cnut’s conquest of England.

All other elements were completed by the NMMC’s in-house team led by Dr Tehmina Goskar, Senior Curator, and Ben Lumby, Exhibitions Manager and the boat build led by Andy Wyke, Boat Collection Manager.