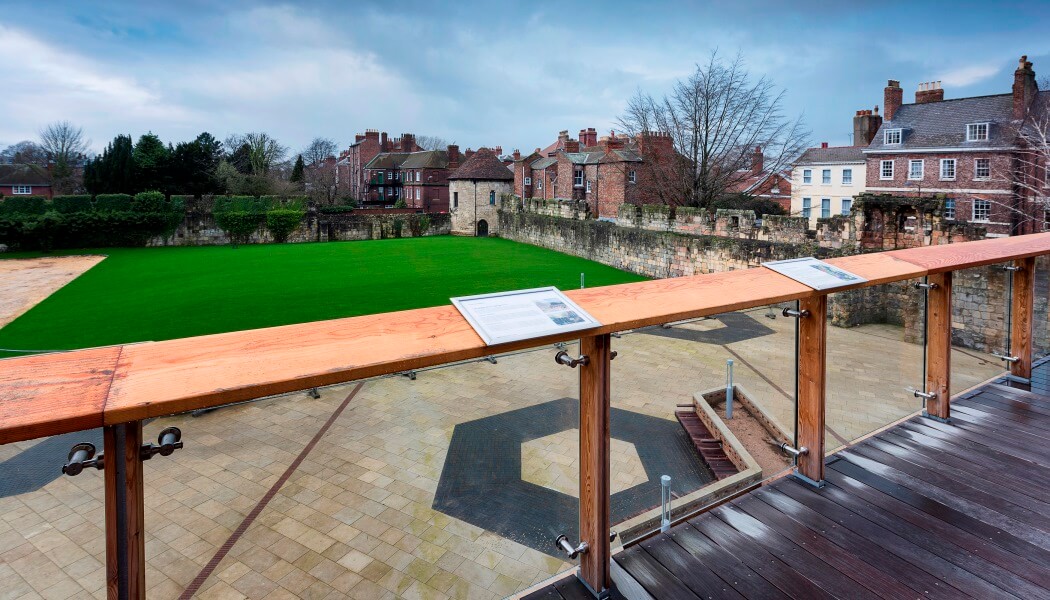 By Adrian Murphy: Main Image: a view from the gallery of the new public gardens
Share

When York Art Gallery reopened in August 2015, following a two-and-a-half-year refurbishment, the attention was quite rightly focused on the work to the Victorian building and in particular to its interior. However, while the new galleries were being refitted and the first floor Victorian ceiling was being uncovered there was a simultaneous project underway to the rear of the gallery that was transforming a 2.5 acre brownfield plot to provide free and open public access to the area for the first time in centuries with an artists’ garden and edible wood

The public garden is situated on land that was possibly used as a legionary fortress extension in 200-300 AD and then St Mary’s Abbey Precinct built between 1050 and 1088 AD (the remnants of the Abbey walls marked out the borders of the project). The Abbey ruins can still be seen in the neighbouring Museum Gardens, which were created when the Yorkshire Museum was built in the 1830s. However, the construction of the Yorkshire Museum and Museum Gardens also put a brick wall up to the land where York Art Gallery’s new Edible Wood and Artists’ Garden are, which meant the two were cut off until the recent redevelopment.

The Edible Wood is based on the principles of permaculture and forest gardening, exploring the relationship with food and the future of crop production. It features plants that have an edible component and are both attractive and useful. The Artists’ Garden is a combination of grassed area and paving which backs on to the art gallery where a staircase and balcony have been built and used to display contemporary art for free.

“Planning started in 2013 and it opened in 2015 but it looks as though it has been there much longer,” says Alison Pringle Garden Manager at York Museums Trust, which runs York Art Gallery, Yorkshire Museum, York Castle Museum and York St Mary’s. “So in garden terms it’s actually rather new. The land has a has a really long and interesting history but in the current time wasn’t being used and I think when the project to redevelop the art gallery came it was really an opportunity to develop all of that unused land and open it up to the public and that was a the prime motivation.” 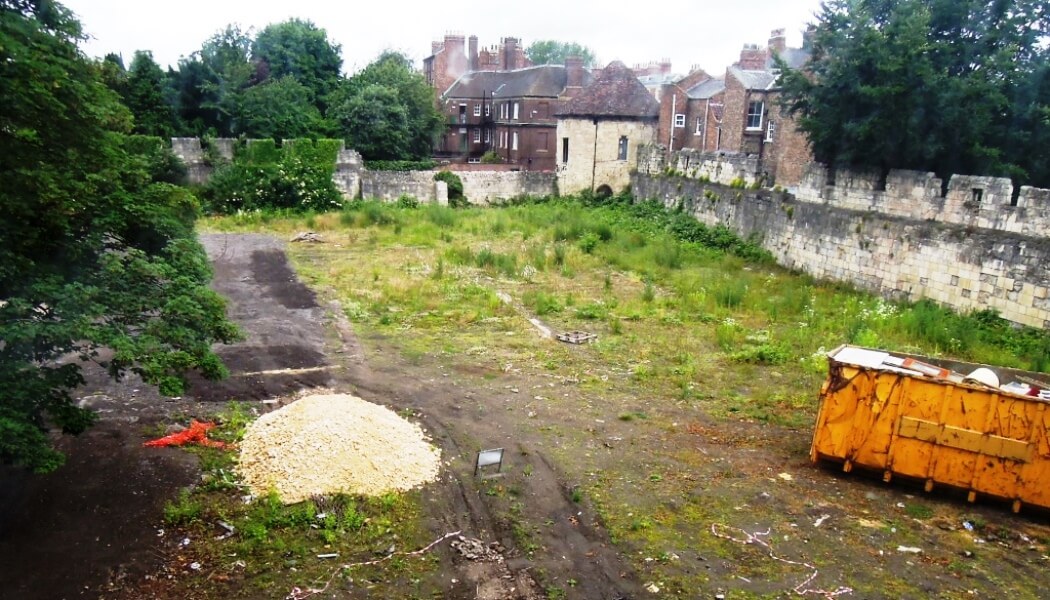 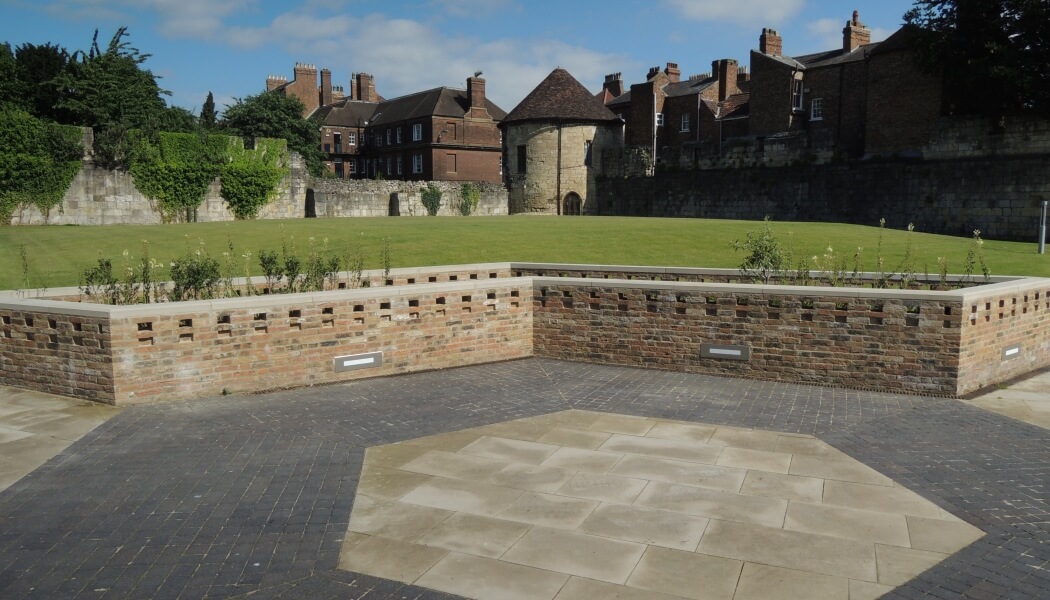 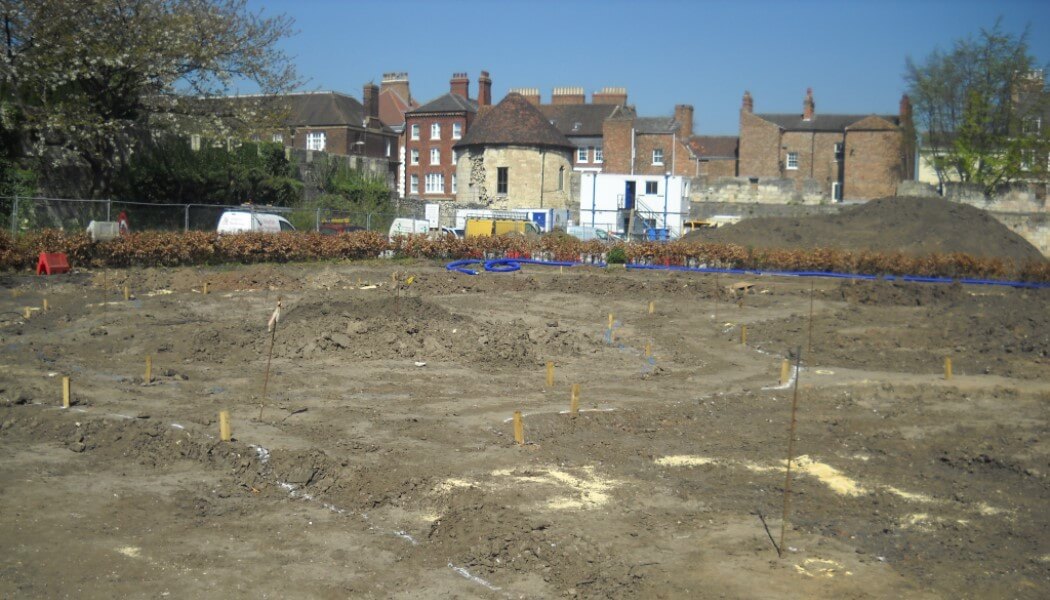 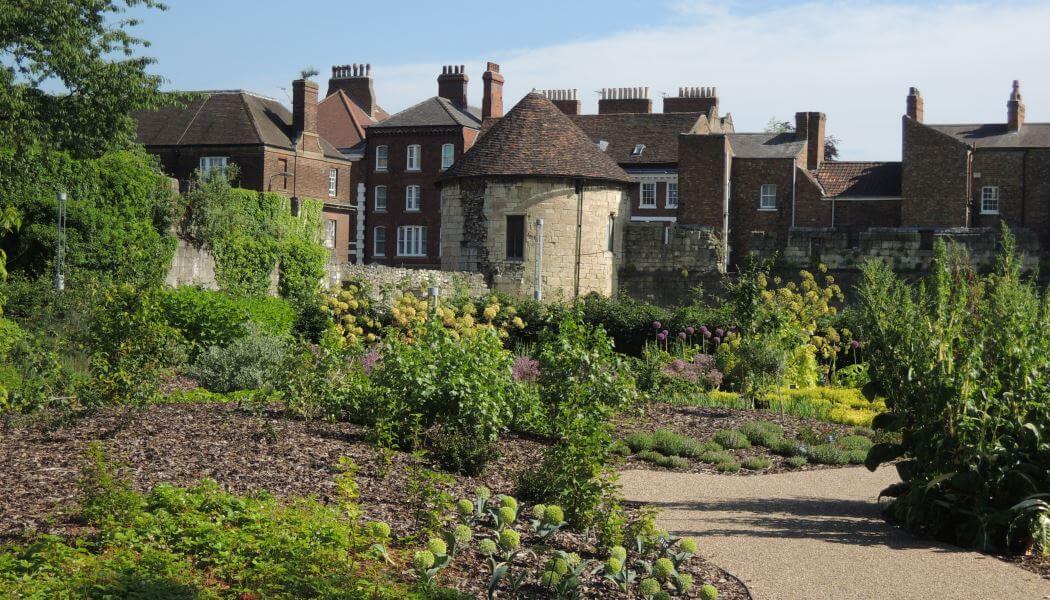 In more recent times the land was occupied by a large temporary exhibition hall built in 1892 and destroyed in 1942 in a German bombing raid. And after the remains were flattened the land was requisitioned and hutments built for the of the Royal Canadian Air Force. They were then subsequently used as a teacher training college, space for York School of Art and as museum storage.

“It is the first time the land is free and open for public access in around 700 years, so before that it had always been partitioned off and only had access to those that were part of whichever group were using the land at the time. Originally it was part of the medieval abbey complex of St Mary and the huge walls that bound the site are abbey walls and part of the abbey precinct.”

The team felt it was important for the history of the site to bring that area back into circulation and also it made perfect sense to link the art gallery with the outside space and the Yorkshire Museum to make it one unified area where people can walk through Museum Gardens and into a new Edible Wood and the Artists’ Garden and be at the rear of the art gallery moving seamlessly throughout without leaving the abbey precinct.

One of the challenges was to provide a space for a wide-ranging set of activities on the site but still giving it some kind of visual interest as well, which is why there are details such as the blue hexagon paving in the hard landscaping that echoes the hexagonal tiles that are on the side of the art gallery, which get their inspiration from the little blue paving in some of the alleyways throughout York, tying in the whole city with that detail.

“The design of it was quite tricky to try and fit everything in and also address the practicality of good pedestrian access and I wanted to get enough plants in to push the botanical interest. And also we needed really good access to the back of the art gallery and I think the design that we came up with marries the practical and the aesthetic quite well.” 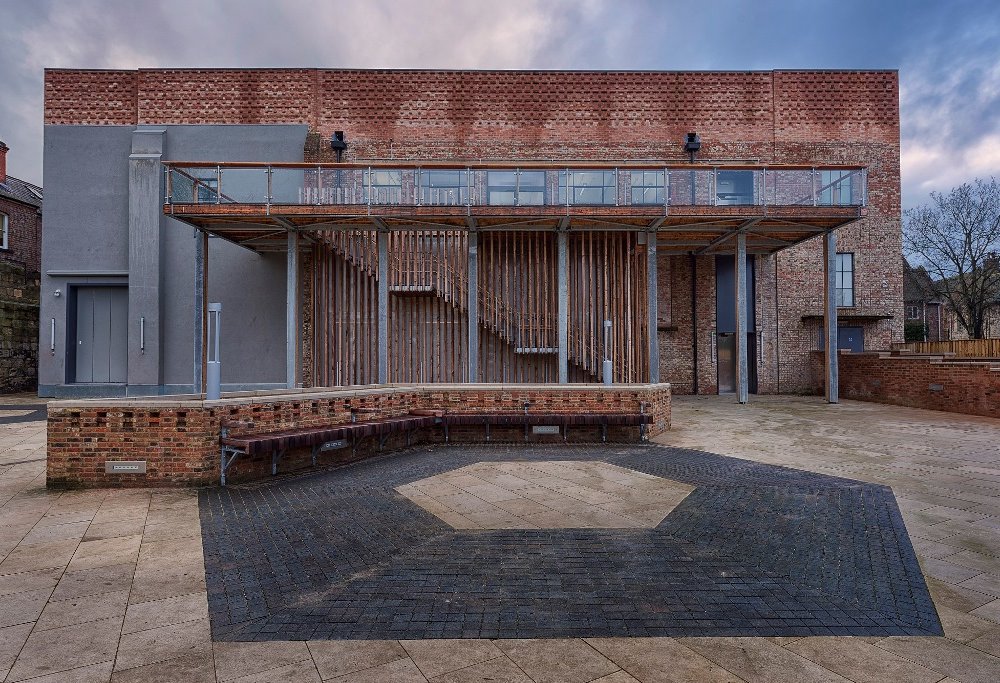 The plan for the Artists’ Garden is that there will be a rolling programme of installations and the space is available for different types of art, which could be performance, sound sculpture, or lighting installation. Currently there is a site specific piece created for the garden called Foundation Myths by Ordinary Architecture installed last year and continuing until 2018. The gallery is now also installing another piece called Leisure and Golf by Doug Fishbone, which opens on June 3.

Pringle believes the new open spaces give people a different way of appreciating the artworks by interacting with them and also the fact the art looks very different when it is outside simply because the light conditions change. “When you are in a gallery it’s lit in a specific way all the time. When you are outside things look radically different depending on whether the sun is shining or the art work has been rained on and whether it is morning or evening.”

The site itself was a challenge as it was within York City Centre Conservation Area and bordered by the Abbey Walls, a scheduled ancient monument that came with many restrictions. There was also a lot of buried archaeology across the site so a lot of the dig levels had to be managed extremely carefully so that they did not impinge on anything below the surface and the archaeology team carried out test trenches. Pringle says that getting all of the permissions in place and liaising with all of the different bodies and organisations associated with those permissions took time.

“There were also issues with material in the ground from the demolition of the Victorian exhibition hall, which caused plans to be altered. It was also an awkward site and access to it was very difficult. At the same time there was also the construction going on inside the gallery, so in effect two building sites. But the fact that we get so many people using the site reinforces the fact that there is a need there for green space within a city centre especially like York that is not very big but gets very busy. People come to the Museum Gardens just to escape the bombardment.”

The development also opens up more pedestrian access to and from York city centre including through an alleyway along the side of the gallery, which leads out to exhibition square at the front of the gallery and straight into the heart of the city, the Roman Wall and York Minster. 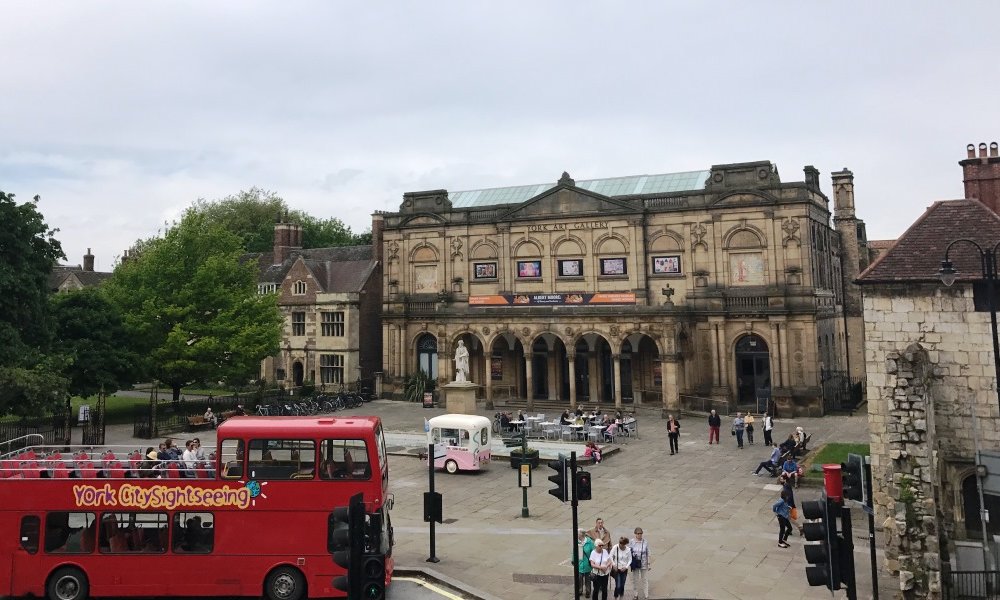 “The opportunity to create a whole new green space and the fact that it is open free of charge makes it so accessible to everybody is one of the great benefits of the whole site. In these days when, quite reasonably, many things have to be paid for this is something that everybody can enjoy provides a really nice contrast from all the hustle and bustle of the city centre and the intellectual stuff that’s going on in the gallery and museum and gives you a bit of freedom for thinking space. You are able to go outside look at the greenery and relax and maybe think about what you have just seen.”

As none of the land was accessible before to the public Pringle says they love it. “Locals visit sometimes just for the simple fact that it is another pedestrian route and then also because it opens up the back of the art gallery never seen before and they get to see a section of the abbey walls. Parents with kids in tow love it because it’s a nice, quiet and safe green space where there are many interesting things to see and touch and have a smell. That’s the idea of the two spaces we want them to be really interactive.” She says they are happy for people to touch the plants and are happy for them to touch the sculptures because that is what that outside space is about. “It helps free people up from the constraints they might feel within the gallery space and gives them a different relationship with any artworks that are outside because they don’t feel that it is such a formal atmosphere.”

Hepworth Wakefield – seizing an opportunity to create a riverside garden

Exhibition Road Quarter – a new public entrance at the V&A